Electric Bikes in 2013, the Year in Review

“Life is like riding a bicycle. To keep your balance, you must keep moving.”

“To keep moving is easier and faster on an electric bike”

Well, another year has gone by…so we’d like to recap a few developments. We’ve only been around for about two years. The first year we were simply finding our feet beneath us, but this last year…we really feel we have found our place in the world.

There are several other web-magazines (that shall remain un-named) that seem to be just like any other magazine…their articles are driven by their advertisers (don’t bite the hand that feeds you). Magazines have their place in the world, we have no problem with a small amount of bias in the world, as it pertains to promoting an agenda. But…the people behind electricbike.com want to hold dear the respect of the E-bike community.

We don’t have any advertisers. We don’t need them, and even if we accept advertisers in the future (we won’t) , we want to maintain a fierce independence that allows us to say what we really feel. We actually like electric bikes! (and some writers out there could just as easily write about shoes or furniture..it doesn’t matter to them, as long as they get paid).

With that statement off our chests, lets chat about 2013…it has been a pivotal year for electric bikes all across the world!

Regardless of the type of E-bike you like, 2013 has been a milestone year for them. Many people didn’t even know that E-bikes existed before in North America, and this year…they have really made their presence known.

In China, the rising middle class wants personal transportation, and many major cities have banned the previously common 2-stroke gasoline-scooters due to smog. So if the average Chinese worker can’t yet afford to buy a car…what can he buy? I’ll tell you what…it’s an electric bike! The E-bike that is the most common in China is similar in shape to a “step through” scooter. And brother, they sold of MILLIONS of them (not a misprint).

Also, China has a comprehensive lead recycling program, which is good because…in 2013 they sold over 300-million 12V SLA bricks (also not a misprint) for electric bikes. Lithium is growing as an option, but SLA is still a frequent choice in China. 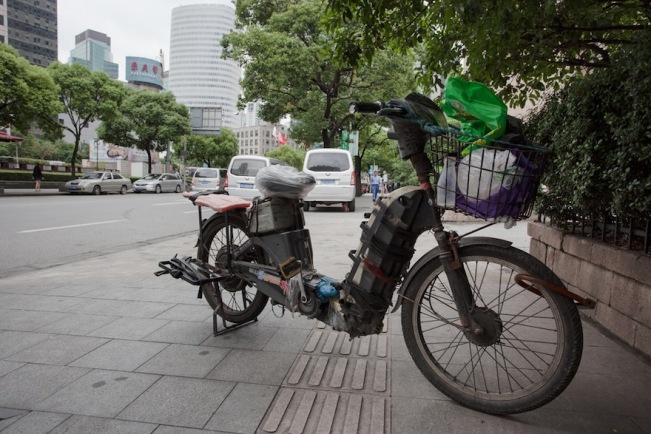 Legally, it DOES have pedals…and laugh at it if you want, but…this is what the middle-class worker in China aspires to.

Sooo…what does that do for customers in North America or Europe? As a result of the exploding Chinese market, there is a greater variety of Lithium batteries (plus prices have come down), and also a variety of affordable motors and controllers of different types.

I’m going to stick my neck out and say that the big story of 2013 is…MID-DRIVES! Direct-Drive (DD) hubmotors, and also geared-hubmotors (Like MAC, BMC, BPM, eZee) continue to sell as the bread-and-butter of the electric bike market, but..the new kid on the block has established itself, and was finding its way to the places that it fits well. As it turns out, if you live where there is a street-legal power limit (like 250W in Europe and Australia, and 500W in Switzerland and Canada), a BB-drive that gives the motor the use of the bicycles gears is a huge benefit.

For factory mid-drives, the big winners have been Bosch and Panasonic (no secret there). However, they made a conscious choice to develop a sophisticated mid-drive that will only attach to  a proprietary frame that is designed to only accept that particular drive. They are still very big in Europe and Asia with the legal power limits that they have there. However for North America, they are somewhat like a 350W underpowered Mercedes. Even so, Bosch is dominating the EU market for mid-drives, and everyone else is fighting for second place. 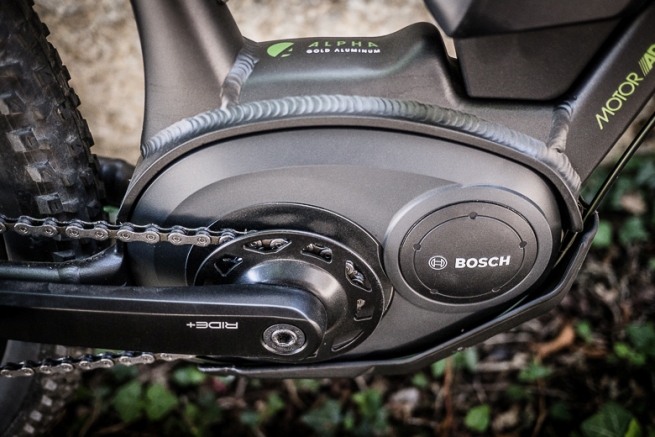 Bosch is the Mercedes of mid-drives, if you can be happy with 350W.

Which brings me to the “wild card” mid-drive that made a splash in 2013.  The Bafand BBS02  is a big winner, because of two reasons. First, this drive will fit to any common bicycle frame that you like. And second, they made a “reasonable” quality drive that can put out 750W continuous, and 1,000W peak…and they did it in a drive that is as small as possible (try to buy one…most retailers in North America are sold out). The 200W-350W units were already selling well in Europe over a year ago, and it has only been this year that North American customers have been able to get their hands on one. 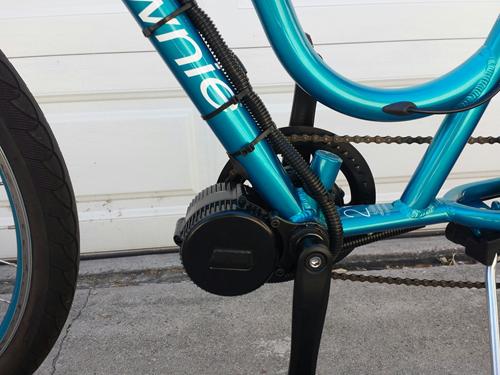 It is not made to the level of quality of a Bosch or Panasonic unit, but…the price is much more affordable for those E-bikers who suffer under a power-limited E-bike law (250W? you gotta be NUTS! I’m lookin at YOU Europe and Australia). Switzerland upgraded their power limit to 500W (like Canada), and there has not been a rash of E-bike deaths over there!

The other mid-drive story that defined E-bikes in 2013 is the GNG 1,000W mid-drive. This unit has some glaring weaknesses that need to be immediately upgraded, but…It is a milestone kit at an affordable price for the off-road E-biker. 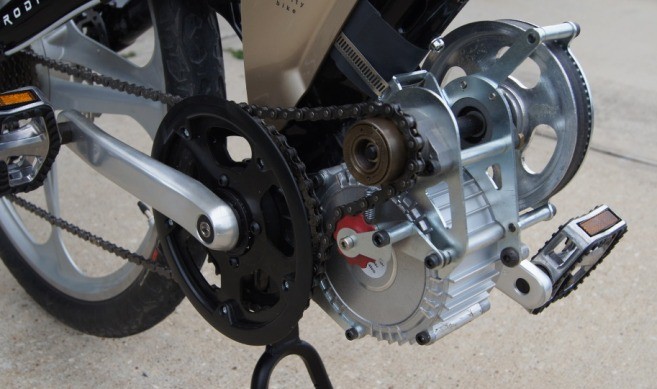 The GNG Bottom-Bracket Mid-Drive, which has some issues that can be fixed with parts upgrades, but its affordable price has recently made it popular.

The stock GNG BB-cartridge is crap (sorry GNG, it’s true). The 148mm wide BB cartridge from Cyclone is the most often cited replacement. The motor by itself has turned out to be an absolute GEM! It was designed for Chinese cargo trikes, and can provide more power than other motors that are similar to it (without overheating). The rest of the kit is just…adequate? Several enthusiasts are making upgrades to help this kit, so it will eventually become worthwhile, so…look for a story (by us) this spring on an upgraded GNG kit.

It was also an exciting year for production electric street bikes, with several new bikes approaching the 30mph mark:

Unfortunately, all of these bikes are also expensive, with the cheapest one retailing for $4000. We hope that 2014 will be the year of the more affordable high performance ebike since electric bike component prices are plummeting.

The Light Electric Vehicle Association (LEVA) issued their annual report. The biggest production factory E-bike sellers in North America were Currie, ProdecoTech, and Pedego. The electric bike population in the US doubled in 2013, plus…their analysis indicates it will double again in 2014.

Mid-drives were the big news this past year, but don’t sell hub-motors short. The growing popularity of sine-wave controllers means that hub-motors can be even quieter than before. Quiet operation (almost silent!) is one of the TWO reasons that hubs continue to be relevant. The other reason is that applying power directly to the hub means the bike chain won’t break when you dump 3,000W or more (4-HP) into the motor (like a mid-drive that gives the motor the use of the bikes gears to improve efficiency). Look for our story in January on the most powerful hubmotor for E-bikes…

Concerning hub-motors, the rear Bafang-BPM continues to quietly remain the motor of choice if you buy a mass-market generic Chinese E-bike. Retailers can apply whatever name they want to the frame, but most of the bikes come from the same handful of factories located around Hong-Kong and Shanghai. For a single rear geared-hub, my first choice is still the more powerful MAC, but if you want to build a 2WD E-bike, two of the BPM’s should work quite well.

Two years ago, E-bikes were only a few booths at the major bicycles conventions, last year there was a noticeable increase in E-Bikes at Interbike in Las Vegas in September, and Eurobike in Germany in August. But, in 2013…there was an EXPLOSION of factory E-Bikes! We also noticed that the biggest pedal-bicycle companies have added E-bike models to their line-up, so as a result…the magazines that they advertise in are suddenly saying complementary things about E-Bikes…imagine that!

Once in a while, we featured a custom E-bike that had  caught our eye, and was something that we thought our readers would like, so…starting in April of 2013 we tried very hard to feature one custom build a month. We didn’t quite make our goal, but the featured custom builds are an inspiration. Heres the line-up:

So, what does 2014 hold for us? Who knows!?…but…one thing I can tell you about is, we will be writing about the Greyborg and Cromotor in January, so stop by again soon, and a happy 2014 to E-Bikers everywhere!

edit: We never wrote a “Year in Review” for 2012, and our demographic tracking shows the “Custom Build Gallery” list is getting a lot of clicks, so here’ the list of the custom builds from 2012:

Inspiring homebuit electric bike from Pakistan, an interview with Naeem