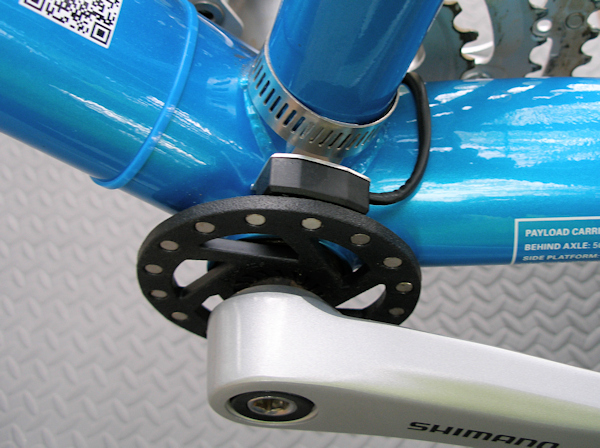 Recently, at the September Interbike-2013 in Las Vegas, three big players in the E-bike market provided test-rides on production models of their E-bikes that were intended to retail in the USA, and they had a 28-MPH top-speed when in Pedal-Assist-Sensor (PAS) mode…they are Specialized, Currie, and Stromer.

Previously, the US federal laws seemed to only allow a top-speed of 20-MPH (and a street power-limit of 750W / one-HP) for street-legal E-bikes. However, sharp lawyers have been looking for a way to legally allow a higher top-speed. Specialized, Currie, and Stromer are all very large international bicycle manufacturers, so something that might make their dealers vulnerable to lawsuits is something that they would never do without some type of solidly-researched legal ground to stand on.

The peculiar point of the US-configured systems that are now being promoted is that; the rider can only use a throttle up to 20-MPH, however…if you pedal, the PAS will power up the E-bike all the way to 28-MPH.

Here is one example of a “speed sensing” PAS. As the small magnets on the disc pass by the sensor, the computer calculates your approximate speed and adds the appropriate amount of assist. “Torque-sensing” PAS works better, but is also more expensive.

I am happy to know that some very important people are taking the lead in establishing a more reasonable standard than the 20-MPH speed limit. Personally, I was actually not too annoyed by the 20-MPH limit. My biggest annoyances are the street power limits that I found to be very frustrating. For instance, IF …a mom on a cargobike with a child and two bags of groceries approaches a steep uphill, I find it just plain silly to limit her to only using 750-Watts of power. If she is riding safely and staying under a speed of 20-MPH, she should be free to use as much power as she can afford. That being said…

…I can’t help but to wonder why we can only ride up to 20-MPH if we are using a throttle?

A famous man once said that: “If you care about laws and sausages, you should never see how either of them are made”. The political compromises that are part of getting a new proposal through the long and winding road to becoming a law are undoubtedly an ugly process. Principles and common-sense are often bent into painful contortions along the way, until the result is almost unrecognizable to those who started the campaign to “make the world a better place”.

On the one hand, scooters and motorcyclists safely use a throttle up to 70-MPH (113 k/h). But on the other hand…they also are required to have a state license, state registration, and insurance. This is a golden era for  most cities in the US, where you can ride a DIY 3,000W E-bike on the streets to your hearts content…as long as the E-bike is stealthy, you are riding safely, and you don’t draw attention to yourself.

I have a hunch as to why these three giant E-bike manufacturers are now able to sell E-bikes that can be pedaled up to 28-MPH. I have no evidence…but here it is: PAS keeps your hands free to operate ONLY the brakes at higher speeds.

I could be wrong, but indulge me for just a few minutes. I recall reading about a builder who wanted to convert a gasoline motorcycle into an E-motorcycle. He bought a running mid-sized used motorcycle for a good price, and then sold the engine for half that price. He added a motor, controller, and battery pack…got it running…and then went to the Department of Motor Vehicles (DMV) to hopefully get it registered for legal street use.

The thing I remembered about this project was that; the licensing and registration was cheaper and easier to get if it was designated as a scooter by an inspection. The two most interesting criteria were that the top-speed could not be over 50-MPH, and it could not require the use of a clutch. IF…it was capable of major highway speeds (50-75 MPH),…OR…the rider had to operate a clutch and transmission…it then had to be registered as a motorcycle. To be a scooter under the law, it had to use only a low top-speed, and have NO clutch and manual transmission-shifter (most scooters have an auto-shifting transmission)

So, the philosophy of the government “think tank” seems to be that if an E-bike is traveling faster than 20-MPH, the allowable system must make the riders safety devices easier to operate in a split-second incident that might result in an accident.

Again, this is just my guess…and of course, there are US-jurisdictions where E-bikes are not allowed in ANY form (I’m looking at you, New York City).

What I can tell you for certain is that: In  Asia and Europe, E-bikes are serious business, and…PAS-controlled E-bikes are now entrenched as  “simply the way things are done”.

There are some exciting things going on in off-road E-bikes right now (especially coming out of Germany), but when it comes to the modest power and speed limits for street-legal E-bikes, PAS rules the street.

If you don’t want to draw the attention of the police, it is a smart move to be pedaling all the time, even if it is just ghost pedaling, with your legs not actually adding to the bikes propulsion (sometimes called “clown pedaling“). I’m starting to warm-up to the idea of a PAS-enabled E-bike, but…personally, I just like how it will help me avoid a ticket when I don’t realize I’m being watched.

Whether you have a throttle, PAS, or both…ride safe, my friends…