In North America, the most popular direct drive hub motor today is the Nine Continent (“9C”) series, a family of rare-earth radial flux motors produced in mainland China. The design and construction of the motor lends itself to many applications having modest power-to-weight ratios, good energy efficiency, and still relatively affordable. There is however more to the story and this article aims to illuminate the strengths and weaknesses which we hope will extend the utility and lifetime of a smart purchase.

A few years ago I returned to riding daily and considered myself in pretty good shape. However the hilly nature of the Pacific Northwest presented a real challenge and curtailed the range, not to mention the fatigue at the end of the ride. Soon I began picking up clients that were farther away and began to look at options, concentrating for weeks on research and reading reviews. Finally I settled on building a two-wheel drive electric mountain bike thinking this machine could serve two functions both for work and for recreation, plus it could get me through the rare snow events. Without forbearance the pregnancy of this decision would completely alter my lifestyle.

Typical electric bikes will have one motor mounted on either the front or the rear, and operate within the 36-48V range. Generally, the 25A controller can provide sufficient power to drive a 26”-wheel Cruiser or MtB up to 24 mph with ease and dispassionately melt away most hill challenges with room to spare. But what makes the motor tick; what’s inside this fantastic little gem, and how does it work?

All motors have at least two coil circuits, and for 9C motors – they have three; it’s 3-Phase, and the current traveling through each phase is shifted 120* from each other which allows more power through the motor and increases efficiency.

Finite Element Analysis Diagram: Magnetic Field intensity varies with current passing through the windings. Similar to how the copper coils rely upon the electric steel plates to create a path for the magnetic circuit, the Back iron works in conjunction with the rare-earth magnets to complete the entire loop:

Real-world image of the Diagram above, with Back iron highlighted in yellow.

The ratio of magnets (poles) to coils (teeth) is called “gearing”. Direct Drive motors use this fixed gearing to apply torque, to rotate the rotor relative to the stator (static) shaft. For the 9C, this gearing ratio is 46 poles to 51 teeth, or 23 pole-pairs (pp) to 17 teeth (t) per phase. It’s not precisely 1:1; however the ratio has to be unequal so that the rotor (and wheel) will turn. In comparison, RC motors and middrives have high gearing which is why they spin so incredibly fast, and correspondingly require external reduction gearing to lower the speed and multiply torque, and linked by chain to the rear tire. Direct Drive hub motors eliminate the extra mechanical links between the motor and wheel; it’s accomplished in one stroke, and therefore – if designed correctly, can be more efficient, if not simplifying.

Returning to the assembly, the stator of the motor is welded to the axle and the magnets are bonded to the rotor. The axle is fixed to the bike frame by way of the torque arm which prevent it from spinning. The rotor is affixed to the axle via the hub covers, and the wheel bearings provide nearly frictionless concentric alignment with the stator. The rotor has raised flanges on each side and drilled with a total of 36 holes which allows for spokes to mate the motor with the rim. The 9C motors accept 12-14 AWG spokes easily enough and are commonly paired to 20-27 inch bicycle rims that are 1.75-2.75 inches in width. Three phase wires exit the motor through the hollow axle. The winds of the coils are multi-stranded, lightly twisted, and roughly equal 10-12 AWG conductor. However the phase wires that exit the hub motor are closer to 14-15 AWG; they have to be smaller to fit through the hollow axle.

There are three Hall Effect (HE) sensors integrated into the stator and they provide accurate “sensored” rotor positioning to the controller. The HE sensors require +5V and GND to operate, and remit the signal back to the controller through a third wire, therefore the entire sensor harness assembly requires 5 wires, and these can be 28-36 AWG, although 33 AWG is common. There’s not a lot of room in the axle, and it’s a tight fit to be sure, but the sensor and phase wires are unified by a durable cabling sheath that resists tearing and cuts very well.

Hall Effect Sensors up close: Embedded into the teeth of the electric steel plates.

Note: Motor weight depends upon the number of turns, type of cover (disc, non-disc), and size of the rim if premounted, though essentially the numbers fall between 14-15.5 lbs./6.4-7 kg each. 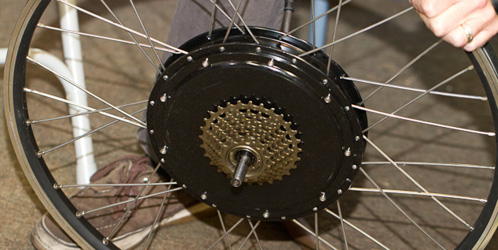 The 2806 unit is a good middle of the road choice: It’s fast and yet strong enough to take on locally organized bike events – and win! There’s just something magical about passing a group of lycras struggling to get up the hill on non-assisted bikes. Personally, I play-nice and pass with modesty and safety in mind, though I’m definitely snickering beneath my breath.

The motor operates well between 36V and on up to 100V. They are rated out of the box at 500-750W, though can easily accept 1000W all day long. For cross-country, I run mine to 1500W and only have to watch it during the heat of the day on a long aggressive hill climb. The motors have been known to take 5000W momentarily; however these have been modified for race and won’t last a minute if prolonged. Still, there’s lots of room for adaptation to suit most needs; a natural fit for cargo bikes and recumbent trikes.

For all the wonder and greatness these units provide, they suffer from short-sighted thrift engaged in manufacturing. There are two basic problems that can affect both 9C – and just about any other motor design: Heat and Moisture.

The motor in the image above was purchased new in May 2011 for a road trip into dry fair weather. Upon return in August I was commuting 45 miles/day into Seattle, heart of the Pacific Northwest where it rains nearly every day of the year. Both front and rear hubs on my 2WD ebike were rusted up by November. Neither hub was vented.

Once the hub motor rusts and seizes, it is pretty much ruined. The way to solve the problem before it begins is to vent the hub covers with at least one small hole at the periphery of each side which would be enough to cause any collected moisture to spin out. To properly arrest rust and corrosion, the stator, covers, and magnets require coatings of industrial-grade varnish in order to protect them at the same high-quality level of typical automobile starters and alternators. The good news is that distributors are listening: Recently attention has been given to provide better customer support, and models are just now appearing with overt modification options that includes venting and conformal coating.

Phase wiring through the axle is too light-duty for high-current situations and can lead to voltage sag (read: loss of power). Damage to the wires can occur when bogged down in the mud or crawling up a long hill. If the motor is too hot to touch, it’s been pushed too far. If you can smell burnt plastic (phenolic), the motor has been toasted and possibly lost some capacity. The phase wires will become hot before this occurs, and checking the insulation for flaws or melting will provide early clues to potential future failure. One way to resolve this is to upgrade the wiring; however, this is a very challenging mod and should only be applied as a last resort, or perhaps taken to a professional that has the setup to provide the upgrade. In comparison, venting hub covers is much easier.

All about power: This motor was modified with 10 AWG Mil-Spec silver-plated multi-strand aircraft wire. Trust me, it’s far easier to pull 12 AWG through the axle!

It’s possible to open up the covers and place sound-absorbing material on the inside… however this could interfere with heat dissipation, not to mention that it would throw the wheel off-balance. A better solution is to find a controller that communicated above human hearing, at frequencies greater than 22 kHz; good luck with that! If one could take away a positive thought: People and critters will curiously hear the motor as you approach in an otherwise stealthy manner. Perhaps it’s for the best.

This article is about Nine Continent motors, however there’s possibly more than one other motor on the market that looks remarkably identical except for the branding; less is known about the model specifics because the distributor does not go into details as well as EBikes.ca, though we feel compelled to list them anyway.

Last year I purchased front and rear disc motors from E-BikeKit.com and I thought I was getting 2806-equivalents, however when upgrading the phase wiring I noted “8×7” was broadly stroked on the stator which lead me to believe they were 2807 motors. Interestingly, there was about a 5-10% performance improvement over the original 2806. Was it manufacturing variance or mismatch? The jury is still out, though at this point – I’m not terribly concerned: Those motors got me to California and back!

Nine Continent motors are sold as 9C in other parts of the country and around the world, and are pretty much synonymous with Crystalyte in terms of brand recognition and being commonly available. It’s a good strong family of motors that is suitable for most needs, though certainly there are some issues to be aware of; if heat and moisture are problematic with your region then you will definitely want to modify the units to suit, otherwise I fear to suggest that failure is likely inevitable – and nearly always at the wrong moment.

For myself, except for pesky rust, it’s the best unit out there for the money and especially for what I’ve been using it for… which is urban assault and wicked cross-country adventures. With a departing caveat, I strongly wish that the manufacturer would get a clue and spend $5 or $10 more on quality during fabrication, making them suitable for American and European expectations instead of turning an apparent cheap blind eye and leaving it to the customer to make it right. Until something better rolls along, ebikes will be rolling on 9C motors.