The Dutch-based global corporation Accell Group may not be familiar to North American E-bikers, but they are huge. They have announced that they are selling the Hercules brand, and will focus on their remaining spread of makes, including Haibike, Winora, Ghost, Raleigh, Batavus, and several other brands.

(The pic above is the 1898 Hercules Electric Chaise, so these guys have been around for quite a while, through a lot of ups and downs…)

The Buyer is the German firm Zweirad-Einkaufs-Genossenschaft (“ZEG”, based in Cologne), which translates to “Two wheeled-Shopping-Cooperative”, and it is a group of over 900 European bicycle shops who have banded together to increase their bulk-buying power. ZEG already owns the bicycle brands Pegasus (street), BULLS (off-road), Yazoo (childrens and teens bikes), Pinarello (street), and several other brands. The inclusion of the Hercules brand will add a cargobike, and also more electric-bike component supply contracts. 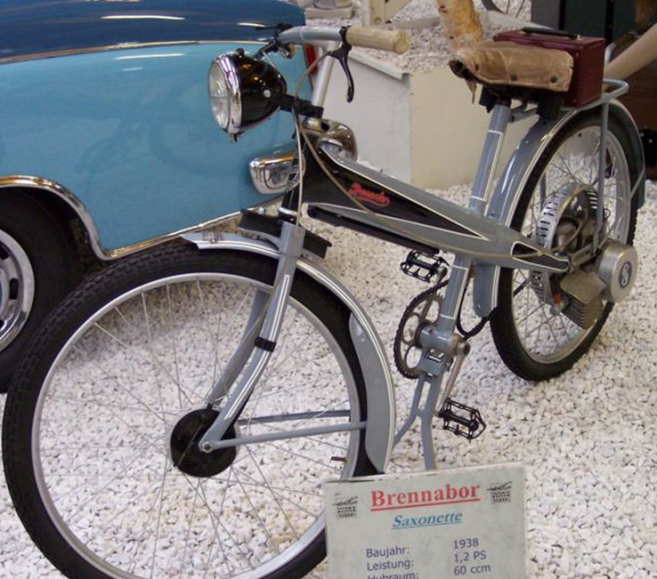 I was not familiar with the Hercules brand before this, with the exception of their 1989 Electra model, which turned up in my research about old E-bike patents. Over 1900 of the 1989 Hercules Electra were sold in Europe, and it is a surprisingly modern design. It only used a 24V system with a simple brushed motor, but that was adequate in the power-restricted markets of Europe.

Hercules started making bicycles in 1886, and has been making a 2-stroke single-cylinder gasoline kit to add to bicycles since 1938. They were purchased by Accell in 1995, and although they are profitable, their growth did not meet Accells desired projections. (There is also a British Bicycle company that goes by the name “Hercules”, and the British firm also has a significant presence in India). 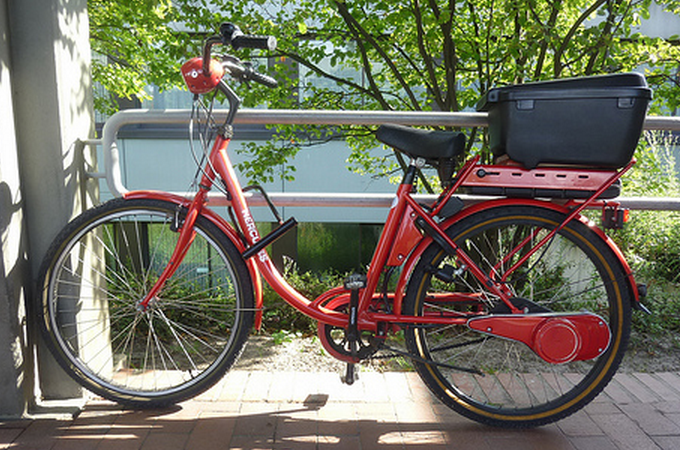 Angela Merkel (the Chancellor of Germany) made an appearance at Eurobike-2013 to show her support for cargobikes. In the picture below, she is being interviewed in front of an electric  Hercules Rob Cargo. 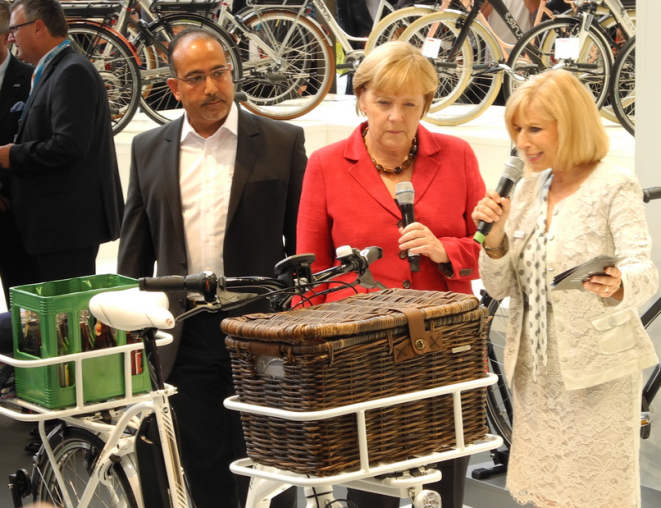 Angela Merkel being interviewed in front of an electric  Hercules Rob Cargo.

The Rob Cargo model uses 24-inch wheels, and the popular Bosch mid drive system. It gets its power from a 36V / 11-Ah battery. The gearing is provided by a Shimano Nexus 7-speed. This style of cargobike is fairly common in Germany for deliveries, and a similar electric cargo bike has been used for years by the Deutche Post mail service. 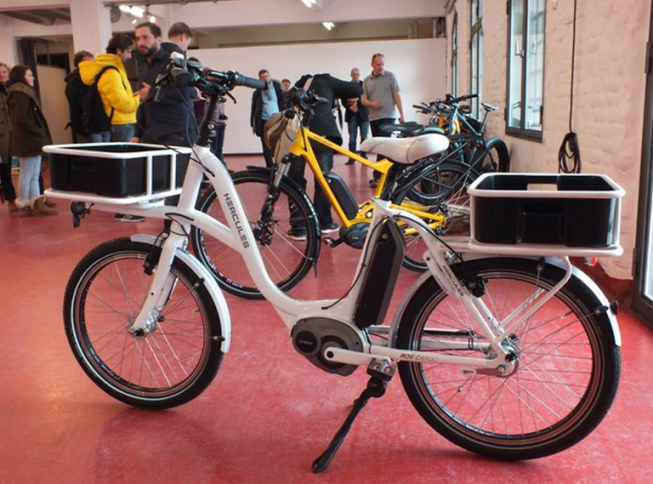 Here’s a pic that shows the popular Bosch mid drive on the Hercules Rob Cargo.

Hercules also carries a wide variety of fairly conventional frames, found here. The pic below is the Hercules Robert, with disc brakes and the Rohloff 14-speed Internally-Geared-Hub (IGH). This model is shown with the optional front and rear cargo racks. It uses the same electric system as the Rob Cargo.