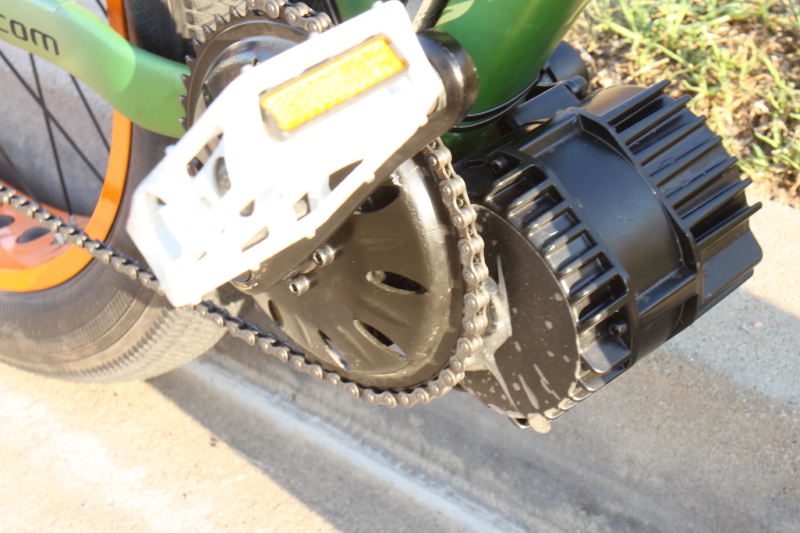 I would have liked to gotten better photos, but like the installer, my time was short, so I ‘got er done’.

I wouldn’t be surprised to find America’s motto “More power” inscribed somewhere deep inside this new mid-drive. Folks have been overtaxing these drive conversions to the point of failure trying to get the power this new unit has to spare, now maybe they will be satisfied. With all new electronics, bigger cooling fins and some other advances, it looks like the tide has be turned for all who wish to power their bikes to those gnarly limits. Expect Eric to give you the inside dirt, I will give you the outside feel to the Bafang BBSHD. 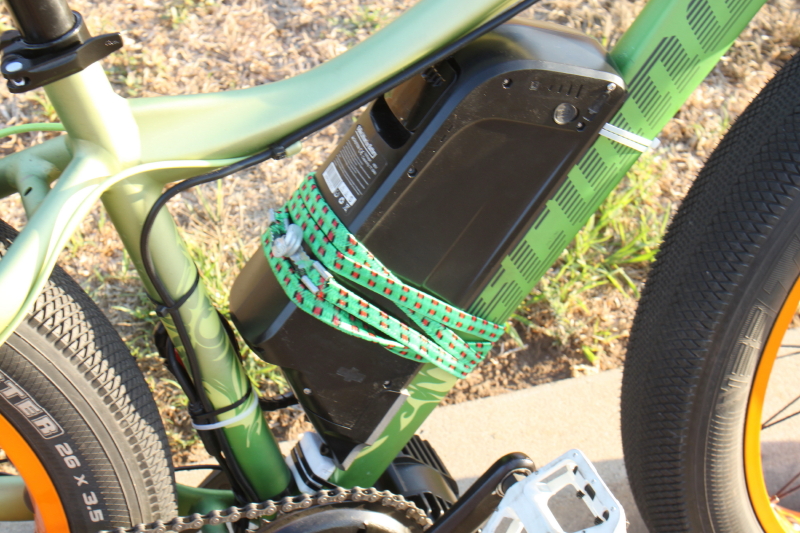 I’ve always been leery of mounting the battery with two small allens to the frame, I guess I’m not the only one. Probably better to use those two allens though.

Adding a mid-drive motor to a bicycle has been just the territory of the insiders for years. Complexity, extra chains and sprockets, and fragile mounting where all solved with the slide-in ease of the Bafang BBS02, yet we wanted more. The ready-to-ride E-bike makers have climbed on the mid-drive wagon as they sensed the desire for them, but they just can’t offer the juice this Bafang pulsates. One nice thing about having more power on tap is that you don’t have to use it, yet you can when you want.

With only 6 of these units in existence, I was blown away that I had one to ride and evaluate. The thrill was only slightly deflated when I found the install was flubbed to the point of what I considered unacceptable. All I can figure is that since it was a Interbike demo bike, someone was under the gun to ‘git er done’, and did just that. It wasn’t running when I got it, so I took care of that and a few of the more serious issues. The first video I posted on it could be called “don’t be this guy’ when it comes to installation.

Before I go on, let’s say that anytime you do any E-bike conversion, attention to detail is important for safety, performance and reliability. When it comes to a high-power unit like the Bafang BBSHD, there really is no room for error. If doing a conversation with this mid-drive (or any kit for that matter) is beyond your scope, please enlist some help. My next thought on the matter is to make sure you have a quality and strong donor bike (more on this in a bit). 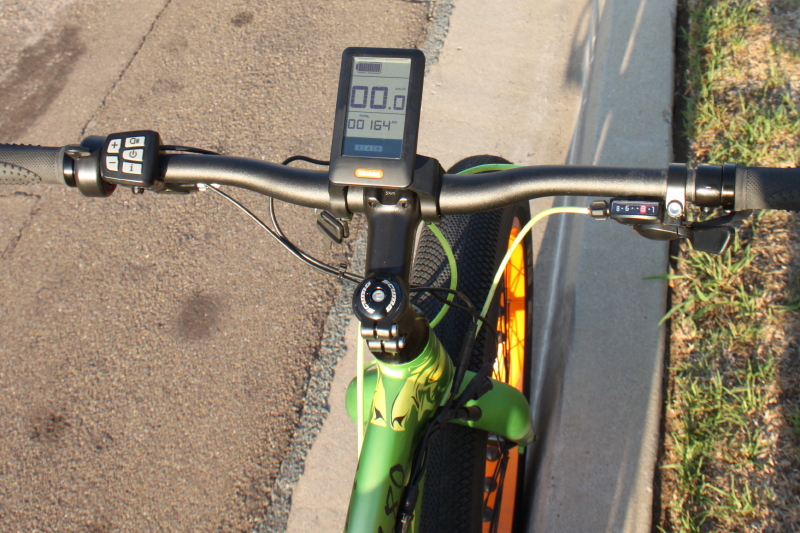 Hang on to this end of the bike. Don’t bother looking at the display when you punch out the throttle—you’ll need your eyes on the road.

Onto the ride. Of course as you can imagine this thing is like a rocket ship when you ride it. 1000 watts of propulsion is pretty mind-bending. I could tell right off the speedo wasn’t set right, partly from the fact it was set to kph, and partly because of the cool street tread fat tires. My downhill max of 65 indicated (40 mph by the numbers) was an easy 45+ (and still picking up speed). My uphill climb with mild pedaling was about 30 mph. If these wind-in-the face speeds aren’t enough for you, then maybe an E-bike isn’t for you.

This baby can hit the legal max while still in 1st gear. The motor spins some crazy rpms, in fact really too many. To keep the heat under control during a climb on a mid-drive, you are best to help the motor with your fastest pedaling speed regardless of the gear you are in. At about ⅓ throttle was my fastest, so the motor outpaced me by a ton. Seeing that heat on the Bafang BBSHD is a non-issue, I just let the motor fly, right along with me and the bike. 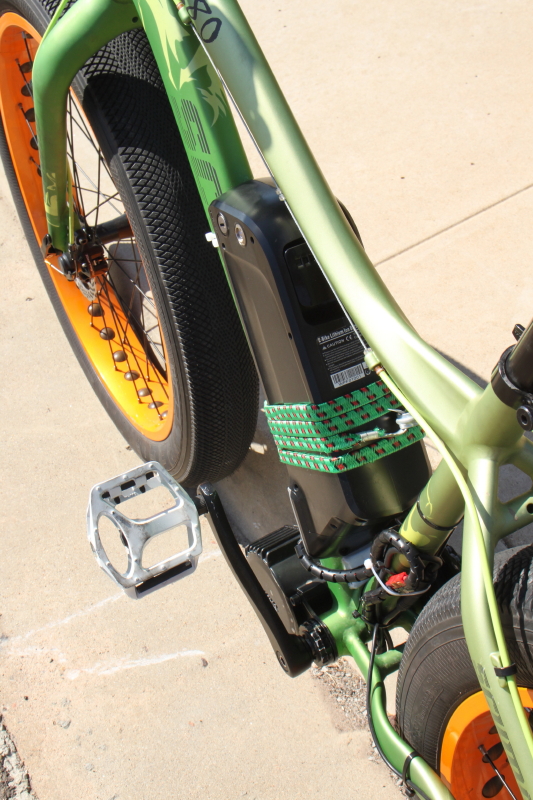 Like the other Bafang mid-drives, the slim line makes for a good ride.

This kit was programmed much differently than other Bafang drives I have ridden. If it was set at the factory default, I could easily live with it, and possibly even recommend it. My point here is that the throttle gave full juice, even though all the pas ranges only offered maybe ½ of that. That made for a generally (all things considered) mellow ride, with the wild really coming with a solid push on the throttle. If you want just throttle control, that is easily doable. That would also give you better and smoother shifting by defeating the pas.

The bike it was mounted on (check the photos) seemed fairly upscale and strong, yet flexing in the rear end was easily felt under power. I checked it over well, and it wasn’t due to looseness or defects with the bike. I felt the tires could have been the main culprit, yet on the whole it reinforced my feelings that a beefy bike is needed for beefy electric power. Remember too that the drivetrain is going to really get stressed, so make sure your donor bike is one strong beast—to match the beastly power. I did a ride video, yet it was more about the controls, than the bike’s ability to match up to the Bafang BBSHD.

If you are ready to order this drive, expect them to start shipping in November. What your real concern is (other than picking the right bike to convert), is lining up the right battery for this package. The amps will need to flow freely for all to be well. Sure, any 48 volt battery will power it up, yet if you want to flex all the muscles the BBSHD has to give, not any lithium battery will do. There are many distributors for the unit, but not all of them will be in a position to get you the battery it needs. Be pre-warned and do your homework well in this respect. 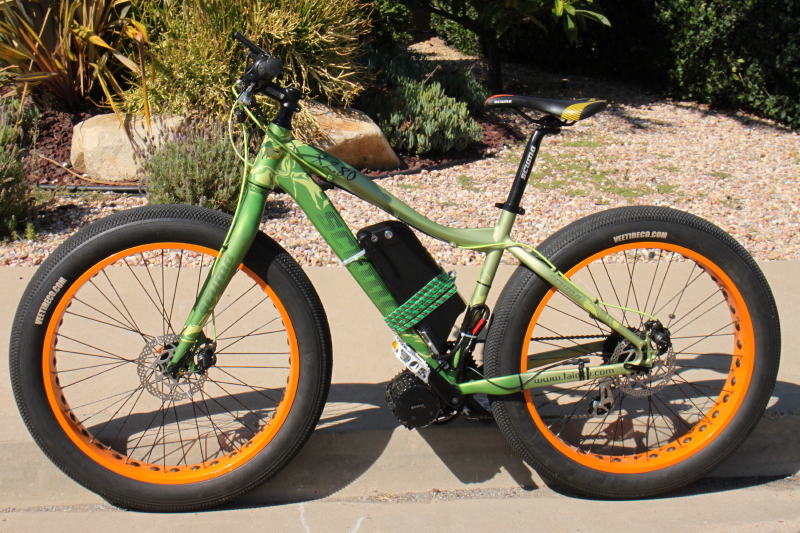 Fat-tire excitement with power to spare.

The final video I shot was of a small group ride when the actual owner of the bike came to pick it up. I have to give great thanks to him for giving me the chance to ride the future and be able to tell you about it. I’m sure I will have many more chances to experience it (24 hours just wasn’t enough), in fact you will see (and get to ride) a bike with the Bafang BBSHD at my twice-a-year E-bike seminar next week. This is one unit that will be heavily seen on roads worldwide in the coming months and years. Make sure to look quick, as just a glimpse might be all you get.

I feel that mid-drive electric bikes aren’t for everyone (a story for a different day), and one with so much power thins that crowd. I got a kick out of it and found that an easy cruise is fully possible. The whine of the motor was on par with other Bafang mid-drives I have ridden, noticeable, but not objectionable. The controls and refinement were welcome. Not my cup of tea, but maybe yours.

Stay tuned for more on this soon to be overly popular unit, Turbo Bob.

“Riding a race bike is an art—a thing that you do because you feel something inside.”—Valentino Rossi.

In case you missed the video links—here we go again.

A small group E-bike ride with the Bafang BBSHD.