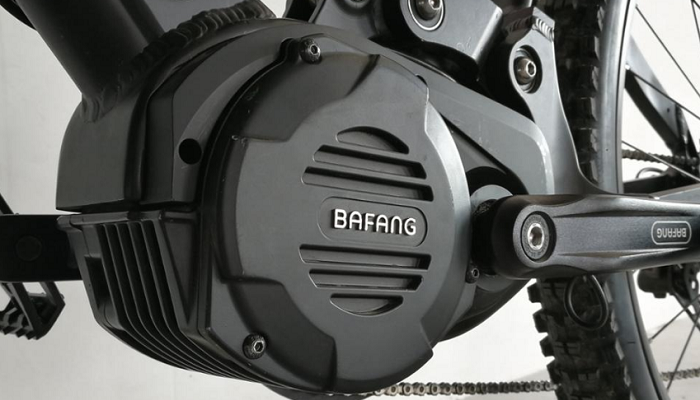 Bafang Ultra Max, the new big dog on the porch

The Bafang Ultra Max mid-drive has the biggest motor you can buy in a factory turn-key ebike right now. It is labeled as a 1,000W drive, but…it is capable of MUCH more. Not only that, it has ISIS cranks and torque-sensing, so…let’s get started.

Bafangs internal labeling system calls this the MM G510.1000, and it’s design makes several improvements over my favorite drive, the BBSHD. The BBSHD is a kit that slides into just about any frame you like, but the Ultra Max requires a proprietary shell to mount it (see below).

The first thing that pops out at the casual observer is that the Ultra has a larger diameter motor. This increases the amount of leverage that the magnets exert onto spinning the rotor, without any additional watts applied to it, compared to the same watts being applied to a smaller diameter motor with the same copper mass. The other thing that this helps is the efficiency, since the “tangential magnet speed” is faster for a given RPM. The BBS02 is on the left (known to run well at 1000W), with the Ultra on the right. The diameter of the BBSHD would be about halfway between the two. The BBSHD is often run at 1500W, so the Bafang Ultra should easily be able to handle 2000W or more. The stator has 12 concentrated coils, and the rotor has 8 magnets (4 pole-pairs). Pic courtesy of endless-sphere member Ivanovich_k

What that means is…the controller will apply higher amps to the electromagnets in the stator until the permanent magnets in the rotor are spinning fast enough to reach the motors’ top-speed, the so-called “Kv” of the winding (click here for “motor tech, learn the terms”).

The faster the magnets pass by each other, the shorter the pulses of watts are…that are applied to the electromagnets. Using lots of small pulses ‘can’ provide the same total power that is applied, compared to using fewer long pulses, but…using long “on” pulses will heat up the MOSFET’s in the controller, and also the electromagnets in the stator.

Be aware the Ultra Max stator is narrower than the BBSHD, but the diameter is larger enough that it still does have more copper mass.

Another thing that is worth noting is that the BBS02 in the picture above uses what’s called “Surface Permanent Magnets” / SPM on the rotor, and the Ultra (along with the BBSHD) uses a style that inserts the magnets a small distance away from the surface of the rotor. This style is being seen more often these days, and it’s called an “Interior Permanent Magnet” motor / IPM.

This design allows the magnets to run cooler, which is important because one of the limitations on how many amps a motor can use is the heat that is generated by “eddy currents”. The stator core is made from a stack of very thin steel plates in order to reduce eddy currents, which are generated anytime a ferrous metal is rapidly passed through a magnetic field.

Using a stator-core that is made from thin laminated plates (coated with a lacquer to electrically isolate one plate from the other) is a cost-effective way to accomplish a limitation of any eddy current heat, but…unlike the laminated stator-core, the magnets are solid chunks of metal. With the older SPM motor designs, the magnet body itself becomes a source of waste heat.

With an IPM, the permanent magnets will “magnetize” the slim section of steel between them and the electromagnets in the stator. This keeps the magnetic field strength in the air-gap at an acceptable level, while still placing the actual permanent magnets a short distance away from the air-gap. Permanent magnets can lose their magnetic power if they get too hot, so…by doing this, you can use more “temporary peak” amps without overheating the magnets.

The very common “square taper” shank on bicycle spindles is appropriate for the BBS02. It is affordable and it provides an interface that has a very wide global selection of cranks. For instance, if you are looking for an obscure offset in a pair of crank-arms, the square taper spindles (frequently found on street bicycles) will have the best selection…including cranks made of titanium, carbon fiber, aluminum, and steel. The BBSHD also uses a square tapered spindle, which I believe was simply chosen to save on costs. When comparing the BBS02 to the BBSHD, it was obvious to me (years ago) that the larger BBSHD would be the drive of choice for off-roaders (off-road is where there are no power limits in many countries).

The one place where you can consistently find the stronger (and more expensive) 10-spline “ISIS” format for the spindles is on serious off-road bicycles. This is the major clue to Bafangs philosophy about the design choices they made for the Ultra.

For instance, when it comes to a “street legal” electric bike, the USA has a 750W power limit. Then…Canada, Switzerland, and Austria have a 500W power level, and many other countries have a ridiculously low 250W power level. The Bafang label claims a 1000W power level, but they are actually being run at over 2000W, and THAT…is not street legal anywhere!

[edit: angry emails have informed me that Oregon and Virginia have a street-legal power limit of 1,000W]

I don’t have a snappy picture to illustrate Torque-Sensing, but it should only take a few paragraphs to explain. Most “Pedal Assist Sensor-PAS” designs allow the bike to add power by simply sensing when you are pedaling (no hand throttle). In fact, some countries in Europe only allow PAS.

The affordable PAS solution is to have a “speed sensor”, where pedaling causes a disc with several embedded magnets to pass by some type of fixed magnetic sensor. However, it can take a 1/4 turn of the pedals to engage, and a half-second of stopped pedals to dis-engage. Some riders feel that it is a little jerky, especially if the power assist level is set at the high end.

A torque-sensor is more expensive, but all of the modern versions that are readily available provide an “instant-on / instant-off” experience when you start and stop pedaling. Most of them even sense the amount of pedal pressure that the rider is applying, and then it adds motor power accordingly. Who likes this? Off-roaders.

Well, actually…everyone likes it, but…off-roaders are consistently willing to pay more for it. It makes sense. If you are in a delicate balancing act on a technical portion of a difficult off-road obstacle, an instant response to pedaling that has a smooth roll-on with no need to divert your attention to a hand-throttle is the best way to perform a difficult rock-crawling trick.

The pic below shows that the factory controller for the Ultra uses 12 MOSFET’s. A Field Effect Transistor / FET is an “on-off” switch that controls the amps that are fed to the three phases of the motor. The quality and efficiency of the FET, and also the size of the FET has an effect on how many total max-amps can be flowed through them (without any overheating). Even so, 12 FETs is a LOT! If you are only running 52V X 20A = 1000W (like the label), it will barely get warm…

Side note…the fact that the controller is not “potted” (not covered in a firm waterproof goo) means that it wouldn’t be too hard to upgrade the FETs to higher efficiency (meaning less waste-heat for the same watts), or higher voltage (along with higher voltage capacitors). That being said, it would be easier to splice-in an external controller to use 20S / 72V, if you wanted to experiment…

The motor Kv is 55-RPM’s per volt, and the triple-reduction between the motor and cranks is 18:1. Additional gearing can be used between the cranks and the rear wheel. Having more stages of reduction will cost more, add complexity, add mass, and add friction. However, it can also allow the drive system to provide higher wheel-torque with the same size of motor. Pic courtesy of robocam. This builder has removed the stock controller and is trying to fit a controller model called a “Phaserunner”. If you don’t have a grease preference when re-assembling, Mobil-28 synthetic is my go-to option. Pic courtesy of ES member Daxxie.

The benefit of a conventional mid-drive kit is that it can slide into the “bottom bracket” of almost any bicycle frame that you like. The drawback is that it limits the arrangement and sizes of various components inside the drive. Proprietary drives have much more design freedom.

The most popular factory mid-drives are the Bosch, Yamaha, Panasonic, Continental, and others. Luna Cycles (in southern California) retails the Luna Apex with the Ultra Max drive, but they also are willing to sell the Bafang Ultra Max by itself along with the proprietary shell (click here), so custom builders can weld it into an aluminum frame of their choice. Do your homework before purchasing the shell. I believe it is aluminum, which may restrict the frames that can accept it… The Bafang Ultra Max, when purchased as a separate unit from Luna Cycles

Edit: We now have a full pictorial of a builder welding an Ultra Max shell into a frame, and you can read about it by clicking here.

What ebikes have it?

The Bafang Ultra Max was first shown at the Taipei bicycle show in 2017, and it was marketed as being more powerful and less expensive than the popular Bosch mid drive. The 27.5-inch tire version of the Frey full suspension frame.

Frey was an early adopter of the Bafang Ultra Max drive, as seen in the pic above. They also have a hardtail version, and a fat tire version too. The Ultra is reported to allow the use of 1600W of power in the factory-authorised high-powered versions. It is reported to provide 160-Nm of torque, and it also provides that power up to 28-MPH (45 km/h), which coincidentally is the street-legal power application limit in the USA. Exess, from Germany. I don’t know anything about Exess, but they seem to be very upscale. Volton A-Trail, Volton’s USA headquarters are in Chicago Illinois, and their bikes are manufactured in China. The Biktrix Ultra, Biktrix is based in Canada “Watt Wagons” makes an upscale titanium dutch-style city bike with a Gates belt instead of a chain (to see it, click here).

Most of our readers are based in the USA, and if one of them wants to look at possibly buying an ebike with the Bafang Ultra Max mid-drive, Luna Cycles in southern California should be your first stop. It appears on the upscale Apex, and also on the more affordable Apollo. Be aware, when Luna has them in stock, they often get snapped up very quickly.

One of my favorite writers is Karl from ElectricBike-Blog.com. Here is a link to his impression of the Luna 2500W Ludicrous Apex. 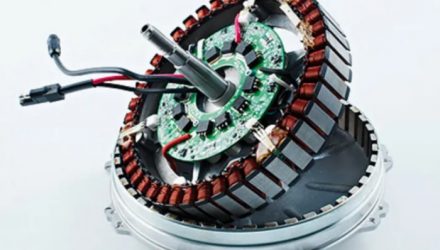