I don’t know what’s in the water that they’re drinking down in Australia (or is it the Aussie beer?), but whatever it is, there seems to be a high incidence of “custom E-bike fever” there. Roger (ES member “Rodgah”) lives in Caloundra, on the North-Eastern “Sunshine Coast” of Queensland, Australia. This awesome frame was custom TIG-welded by his friend Paul, (ES member Timma2500)

Our website tracking shows that our readers respond well to stories about the high-end and high-power builds, so…how about an E-bike using 100V?

Many of the bicycle components were purchased from http://www.chainreactioncycles.com/us/en 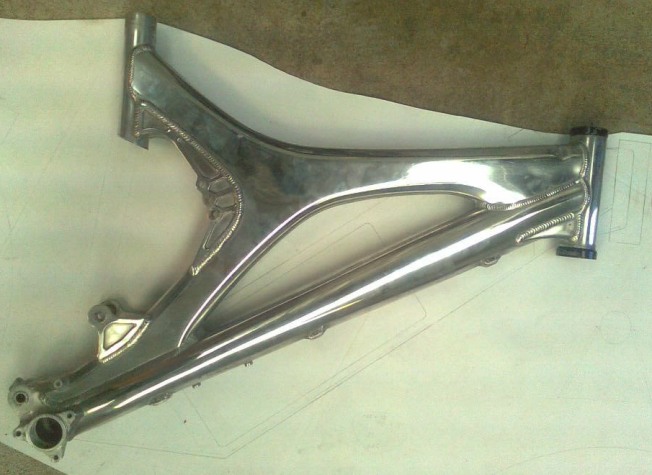 With the paint removed and the frame thoroughly cleaned, the battery box can be drawn and the best placement can be determined. 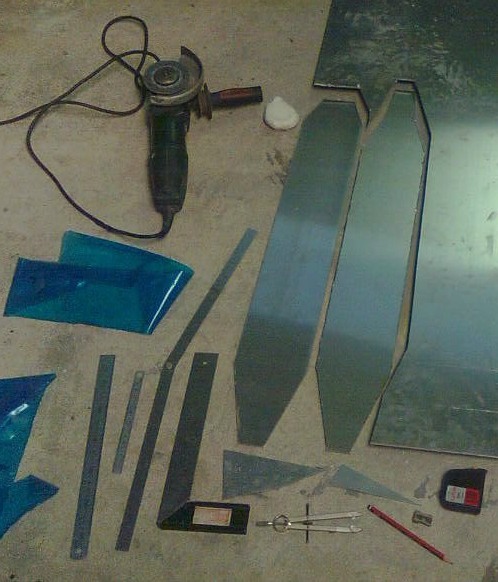 I have also used a angle-grinder with an abrasive disc as a cutting tool. Beware of kickbacks (I have a scar on my chin), and it is an absolute MUST HAVE to wear eye protection. I use swim goggles now, after some sparks and grit bounced around my face and some got in behind my eye-glasses. 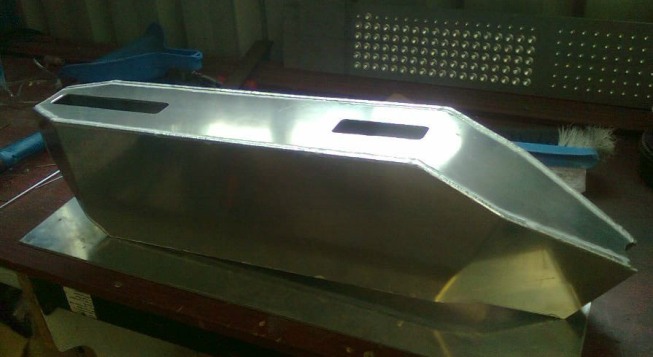 Timma said he can control the heat and metal-warping better with TIG, although other methods will work when welding aluminum alloy. 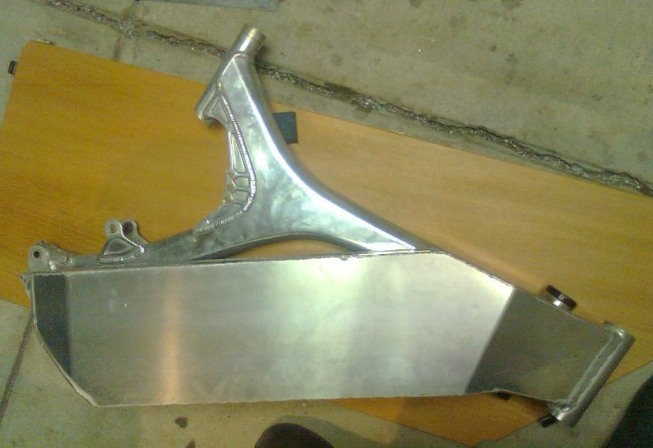 After installing a very large battery, he still had room to spare! 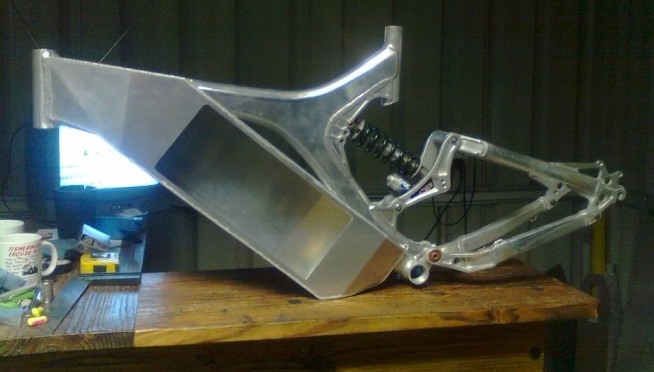 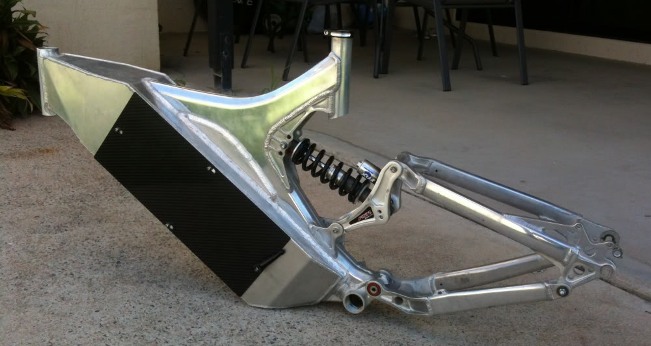 A carbon-fiber access panel finished off the professional look of this awesome build. 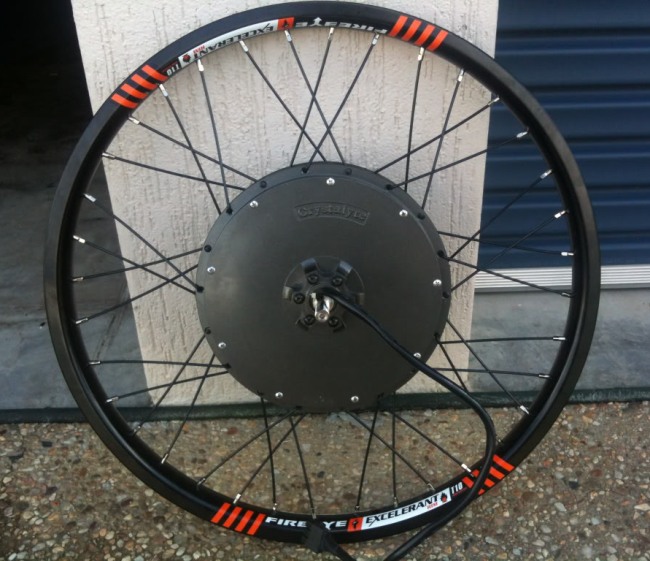 Roger didn’t want the extra-heavy weight of a 530X series rear hub, or a Cromotor. By going to a 100V system, he could get awesome performance from a lighter 35mm wide stator, like the Crystalyte HT3525 he chose here. 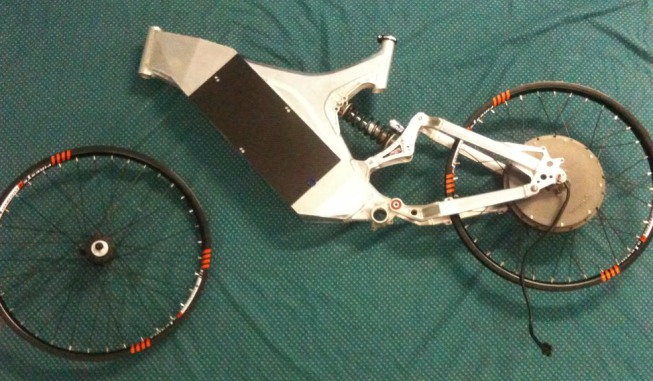 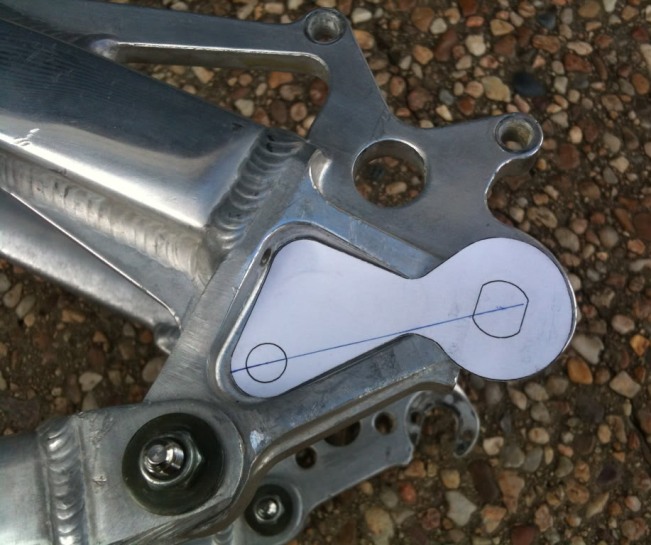 5000W / 6.6-HP twisting at the axles would kill the stock drop-outs instantly, so custom torque-arms were drawn and the shape emailed to a laser-cutter. 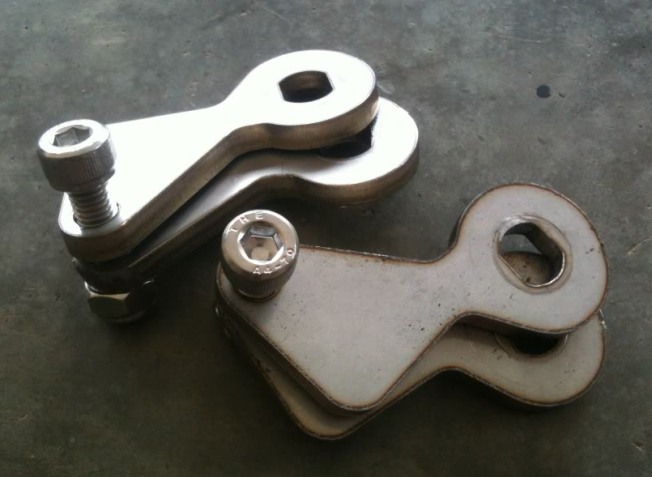 Due to the thickness limits of the laser-cutter, Rodgah ordered four 6mm thick torque-arms. 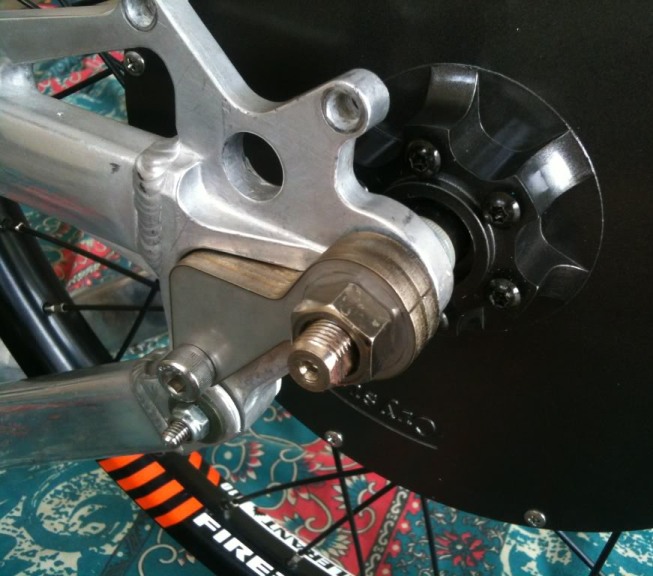 heat-treated aluminum has a tendency to snap when it breaks, instead of bending. By using 24mm’s worth of steel thickness (12mm on each side), this ensures the torque-arms take all of the twisting-axle forces, and none are transferred to the aluminum drop-outs in the frame.

Below is a pic of a 24S / 1P string made from four 6S bricks of LiPo, pic from ES member Sacko. Rogers pack is similar to this, but not identical. 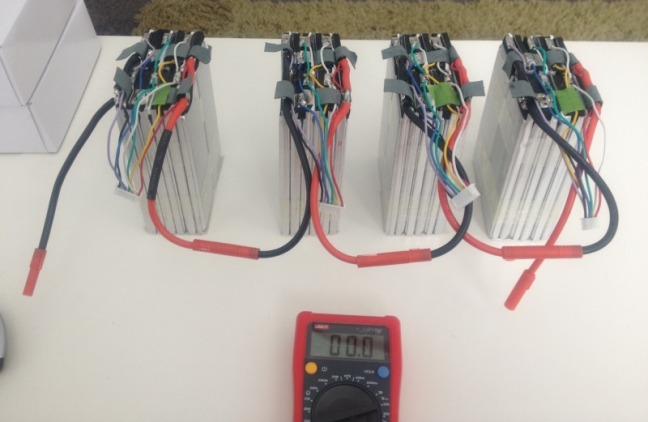 Four of the popular 6S bricks connected in series to get 24S. Rodgah needed two of these strings to achieve 24S / 2P for a nominal 88.8V that is actually 100V when fully charged. 10-Ah isn’t a large pack, but Rodgah had to cut back on the battery volume to fit the higher volts he wanted. If Rodgah re-configured this exact pack as the popular 12S /44V voltage, this same 880-WH size of pack would be a whopping 20-aH! 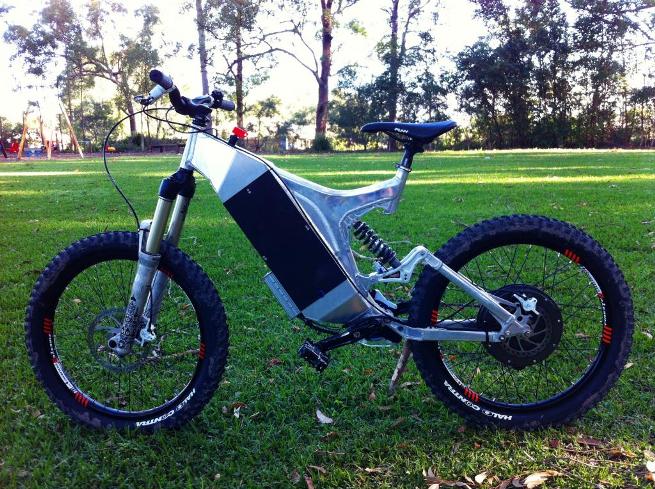 If you have the option of using higher voltages, you can achieve significant power with fewer amps. It is the lower amps and the resulting lower heat that allows Roger to use 5,000W on a rear hub as light as this without frying anything.

There are many different component weight distributions that are acceptable, but whenever it is possible, this is the absolute best place for the weight of a significant battery pack. The large red kill-switch is vital, and needs to be located where it is within easy reach, whenever you are using 100V. 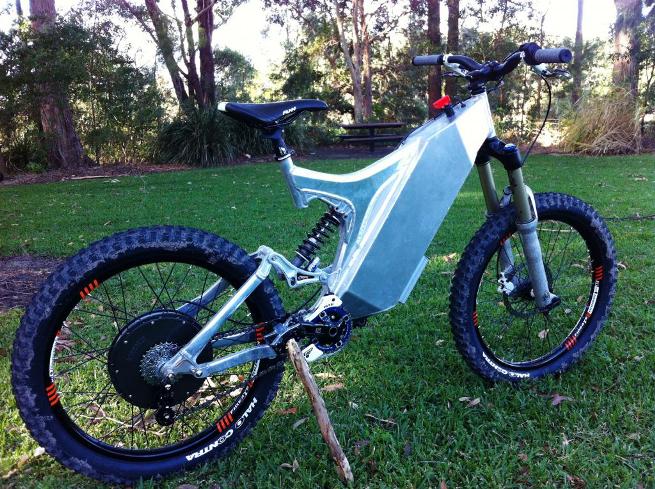 The small chainring maintains a high ground clearance when crawling over trail obstacles, but it also limits the rider to only adding some pedaling when the bike is at a slow speed. 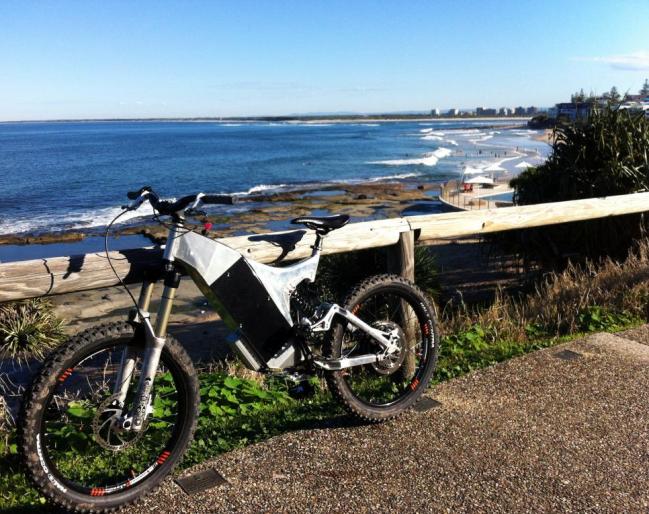 If you watch the video, you’ll hear how quiet a powerful rear hub can be (the squeaking noise is the front disc brake). This quiet performance of Roger’s E-bike allows him to roll along the gorgeous coastline of Australia’s world-famous beaches without drawing too much attention. It’s quite stealthy…until he comes to a stop. He is then quickly surrounded by interested bystanders with non-stop questions about this outstanding custom build.

Here are some performance quotes from the build-log:

“…The only riding that makes the motor hot is stop/start full-throttle action. If I keep my momentum up, the motor and controller stay dead cool. I could imagine going full throttle up very steep and long hills would heat it as well, but I have yet to find a hill big enough for the motor to even get warm, plus I have a bit of sympathy if I am climbing slowly…”

“…I don’t have a CA [CycleAnalyst E-bike computer] yet, I just feel the motor every now and then [with my hand] and it hasn’t even been what I would call hot, just warm…and that is rare, most of the time it is cold. The HS3540 is a lot faster winding than mine so I would assume it would get warmer riding like that. The 12-FET is modified by Hyena, I don’t know how. I leave mine on the middle setting of the 3-speed since that settings top-speed suits me and the power is fine, I guess it is probably less than 5-kW”

“…I went for a ride yesterday with my friend “thecopterdr”. Great to ride with someone else and have a chat. Managed to get my hub nice and toasty definitely above 50-degC [95C / 200F is a common safe heat limit], climbing slow and rough technical trails, though I am sure without motor power most people wouldn’t be able to pedal the whole way up. The other bike has a Cyclone mid-drive that was only warm at the top so it was a really good comparison of eggs vs eggs (although the Cyclone was noisy). I have a suspicion that most of the heat may have been caused by the low average speed (pretty tight and technical trail) and not so much the climbing itself, I’ll have to test this more in the future…”

“…I can imagine the motor doesn’t transfer heat very well to the outside, I have only once made it hot enough that I could just hold my hand on it, IR thermometer said 50-degC, but that was from constant stop and start slow monos for more than 5 minutes, the rest of the time it is cool, ie: less than 30-degC after a long ride. I think the trick is to keep the speed up, and have some common sense when climbing or going slow….works for me anyway!…”

“My usual mods are beefed up traces and phase wires and then the software flashed to suit. And of course running 4110-FETs. If dealing with noobs I will say “custom firmware tune” as this is easier to say than explain about phase currents, LVC etc. In the past I’ve also added bigger caps laid sideways along the board and fitted thermostats to the FETs to prevent overheating (N/C thermostat in line with the ignition wire) but for general use this isn’t really necessary. And it’s cheaper now to just step up to an 18-FET, than non-Chinese labour for doing these time-consuming mods.

Email is the best bet for contact, hyena.industries@gmail.com
or my website hyenaelectricbikes.com , though it’s rather out of date these days and badly in need of an update and freshen up“