The BMC motor is a geared hub motor that weighs around 8 pounds, and it puts out decent power and hill climbing ability, considering its relatively light weight and small size.  It is considered a high-performance high-quality motor, and can easily get  a bike to 30-MPH, and even beyond while still having good efficiency.

BMC Version History
BMC started with the V1, a 300-watt steel-geared motor (no longer made).  Currently the BMC is available in the  V2, V3, and V4 (although the V2 is being phased out).  The  rumour is that the V4 is a reworked version of the V2. The difference between the V2 and V3 is that the V2 is wound for high-torque (hill cimbing and acceleration), and the V3 is wound for a higher top-speed.  The V3 has had a history of burning out controllers and smoking motors in wattages over 1200.

The V4 is the newest release and it is marketed as being more robust than the V2 and V3, and able to take on a  higher wattage without the risk of being smoked.  BMC upgraded the weakest components in the BMC motor, which  has been the power wires going into the motor, and also the composite gears and clutch system. BMC also claims a 10% higher efficiency with the V4, although testing done at endless-sphere has not substantiated these claims as of yet. The V4 is wound for a higher top speed like the V3. The V4 is considerably more expensive than the other BMC’s, and it is unclear as of this writing whether it is able to handle the high wattage that BMC claims (2000 watts plus).

Quiteness and Stealth
The BMC motor is relatively quiet. It makes a high pitched whirling sound that is barely audible. If you are trying to make it past a sleeping doberman you probably arent going to make it, but if you are passing a group of cyclists they probably won’t hear it. It is not completely silent, but it is audible at a very acceptable level. Just a little noisier than a direct drive motor.

The BMC is much smaller in size than a standard direct drive hub motor, and therefore it’s hard to see especially when mounted on the rear wheel.

Planetary Gear Reduction:
In general, electric motors run better and more efficiently when spinning at a higher RPM.  The BMC hub motor has a planetary gear box,  which enables the motor to spin 5X faster than the wheel.  The motor also has a one-way clutch that disengages the drive system when the motor is not in use, which allows the E-bike to freewheel with no drag. 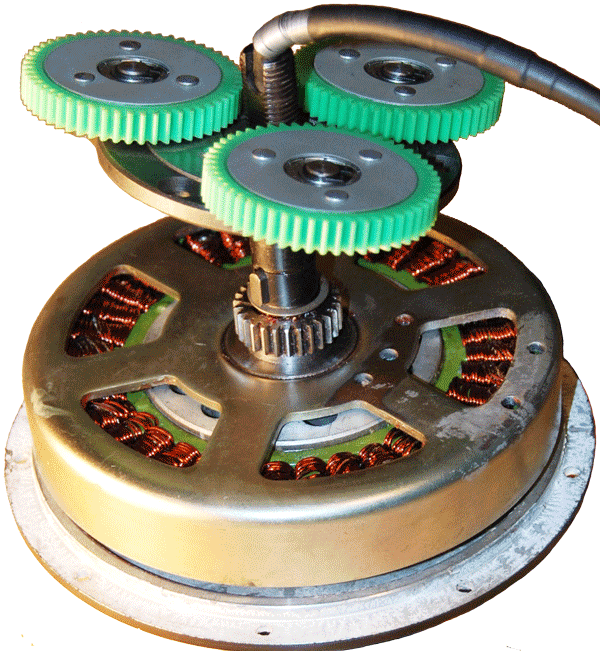 One of the big advantages that the BMC has over a direct-drive hub motor is that because it freewheels like a regular bicycle, it doesn’t have the slight “cogging” drag of an unpowered DD hub. A slight drawback to freewheeling is that you cannot  have regenerative braking.

Refer to our article comparing the BMC to a direct drive motor in a ride report here.

When compared to a direct-drive motor of the same wattage (such as the Crystalyte), the BMC will have around the same top speed, and will be a much better hill-climber and also more efficient because the motor is able to spin much faster than the wheel because of the gears. The BMC uses a much smaller motor than an equivalently powered direct-drive hub.

The BMC geared hub motor is intrinsically complex. Most direct-drive hub motors only have a few moving parts, and a BMC motor with the gear set has tens of moving parts.

This leads to the big 2 disadvantages of the BMC hub motor: #1 it is more expensive, #2 it is more fragile than a direct-drive hub motor.

Durability:
I have run BMC motors for thousands of miles through the streets, and literally down the beaches of San Francisco. I can say that when running a reasonable limit of amps through the BMC, it is a very dependable motor, even when running through water…and even when running through salt water! I have run a BMC roughly 200 miles on the wet pack on the beach, and at times have gotten the motor splashed and a few times even submerged it, with no effect on the motor. The only motor failures I have had is when over-volting a v3 to about 2500 watts.  From everything I have experienced and  read, if you keep the motor under 1500 watts, this is an extremely reliable motor, even when riding in hilly and wet conditions.

Here is what Illia from Ebikes SF says on the subject, one of the most reputable BMC dealers in the country:

WARNING: this motor is often misrepresented and advertized by dealers as 2-3KW motor capable of reaching speeds over 40mph. Our years of experience riding and repairing these and similar motors suggest that for reliable opration, it should not be used at more than 1500 watts and it’s best to keep speeds under 30mph (in 26″ wheel), that applies to all BMC geared hub motors. Sure, it will go 40 + mph at 2000 – 3000 Watts, but that is comparable to running an internal combustion engine constantly exceeding maximum rpm it is designed for. Our advise for riders who desire speeds over 30-35mph and reliable hub motor operation, is to use a direct drive hub motor.

For the Hot Rodders

The question of how much wattage a BMC motor can handle is often disputed. The motor is sold as 600 watt motor, but it is widely known that it can easily be run at 1000 watts. When you start to push 2000 watts and even more, this is where the question lies.

Hi-Power Cycles (an ebay-based company selling high speed bikes to the public) have used the BMC as its motor of choice.  Hi-Power Cycles has been regularly building and selling bikes wtih 50-volts / 50-amps to the BMC, effectively running 2500 watts to the motor. At 2500 watts the BMC is a real screamer, with a 40-MPH top speed and the ability to climb almost anything. Whether the motor can sustain this kind of power and speed without burning up is very debatable.  Also, High Power Cycles will sell you a V4 BMC mountain bike  running 3000 watts and still warranty the product. Even they admit that the power has to be applied with some caution, because the motor cannot hand large amount of wattage for long periods, especially when climbing large hills.

I myself bought a HI-Power Cycles  bike that was equipped with a BMC v3 running 2500 watts to it.  The bike was loads of fun to ride, but I smoked 2 motors before deciding to scale back the amperage to the motor, and now do not run over 1200 watts to it.

Oil Cooling
Since cooling is (at the moment) the biggest limitation of the BMC, some hot rodders have been drilling a small hole in the case of their BMC (near the axle) and filling it one-third full with automatic transmission fluid. This allows the motor to handle even more power without overheating because the oild helps the motor disipate the heat better through the motors aluminum casing. This is for extreme hot rodders, but the thread on how to do this can be read here.  Oil-cooling has the added benefit of lubing the gears and the internal parts in case that do get exposed to salt air, salt water etc.  Oil cooling does seem to be a nice option for those speed demons wanting to go to 40mph and beyond with a  BMC.

Which components:
Choosing the right controller and batttery to pair with your BMC motor is a critical decision.  Unfortunately, I have  found the BMC controller to be somewhat unreliable, but have had great success running Crystalyte analog controllers. The new MAC digital controller has also been reported to be a great option from what I have read, and I will try that one next.

Controllers are rated by how much voltage you can run, and also by the maximum amount of amps that they will allow you to use. For this motor we recommend a 48V battery running at 20-35 amps.  If you are a risk taker, you can run a 48V controller up to 50 amps for a 2500 watt speed machine. If you choose to run a 50A controller, it is advisable to add some type of temperature sensor, to warn you when you are approaching enough heat to damage the hub. Here’s a list of possible temp probe options from endless-sphere.

Your battery choice must consider how much amperage you are hoping to draw from it.  To get the maximum amps without damaging the battery, you could get  a  44V LiPo battery capable of providing 50A burst and 30 amps continuous. 44V / 10-Ah is probably the smallest battery you will want to run (giving you a 10-20 mile range under realistic riding conditions) and if you go with a larger 20-Ah pack, not only will you have twice the range, but you will also double the amperage capability.

The MAC Motor
At some point there was a split in the BMC company, and now a second cheaper “knock-off” version of the BMC is around, and it’s called the MAC motor. The MAC motor is made to a slightly lower level of quality (ie, not as nicely water-sealed) but at a much reduced cost. Among many DIY’s on the endless-sphere forum, the MAC motor has been the popular choice over the BMC. The two motors look identical from the outside, and even when taken apart they look very similiar.  There are small quality differences that make the BMC slightly better than the MAC, especially when hot-rodding the motor and running over 1500 watts.  Make sure that if you buy a MAC, buy the 2012 version with composite gears…not the steel or nylon gears like the MAC motors of the past.

The BMC is not a cheap hub motor solution…it is among the best and most refined solutions for an electric bike  conversion, and also one of the most expensive kits. For the new V4, you can expect to pay $500-$600 just for the motor.  If you can find a cheap V2, buy it now since they will not be around much longer. But even the V2 still retails for around $400.

I believe the BMC is well worth the costs, and it can turn any bike into a high-end electric bike if paired with the right components. If you select a high quality frame, and high quality components, you will have one of the best electric bikes money can buy with the BMC.

The most knowledgeable and respected vendors I know of who sale BMC motors is electric-bikes.com who will match any advertised price and have been selling bmc motors for many years and have ample knowlege, or Ebikessf.com who is also very knowledgeable. Both these dealers offer great support before and after the sale.

Written by senior editor Eric, May 2012

Leafbike has been producing a direct drive hubmotor that has earned a place of respect with electric bike enthusiasts, and I decided it’s time to explain why

Great article! Probably the best explanation of the construction of