The Smart Brabus  e-bike made its debut at the Geneva Motorshow 2012 this month. It has a 500 watt hub motor, enough power to hit about 25mph.

This is double the power of the regular smart bike which has a very under powered 250 watt hub motor.

It looks like the smart will come with a bionx  dash board with a custom made iphone holder added on. The bionx systems is a widely available pedal assist sytem, which is lightly powered and automatically adds power to the riders cadence without use of throttle.  It is though of as a wimpy system in e-bike circles. At 500 watts, this smart bike has twice the wattage of the stock Smart, getting this bike to over 20mph maybe 25mph.

It looks like the Brabus is using the BionX PL500 system, which can be used with throttle or pedal assist and also adds regenerative braking, a tricky achievement with a hub motor. 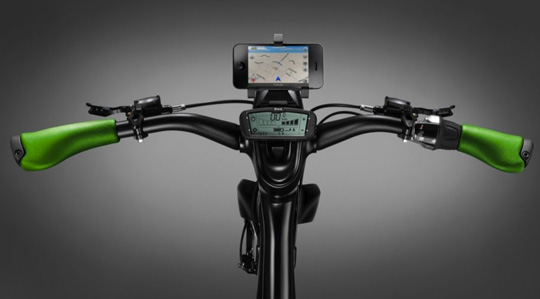 This bike looks like a serious e-bike  offering with custom carbon rims made for a hub motor and disc brakes. The bike also has a sweet belt drive system.

Smart’s goal with this bike is to release it with the Brabus electric car with same coloring with the idea of more style, more power, and more exclusivity. The slogan for the Brabus line is “green heart and black soul”.

The Brabus electric bike will be on sale later this year. Pricing has not been released yet, but we suspect based on pricing of the regular smart e-bike, this one should retail at about $5,000.