I use to live in San Francisco, and my favorite ebikes have always been small wheel folding or BMX bikes. I think small wheeled tiny ebikes make the perfect “big city” commuters. Perfect for on-the-road riding.

Why? Let me name some reasons:

I don’t really need the folding mechanism and BMX bikes are made for kids and downright uncomfortable for an adult to pedal.

So I have always just stuck with folding bikes, until…I found out about the Cannondale Hooligan, which is really an ebike builder into small wheel bikes wet dream (although a bit pricey)

The Cannondale Hooligan has always seemed like the perfect conversion bike for small wheeled bikes.

You can read our  complete story about this amazing build here. 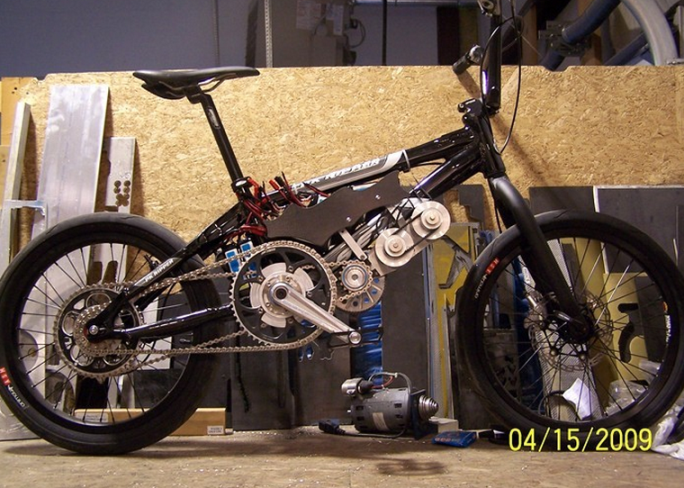 Of course Matt’s version of the Hooligan is crazy good, and its how I would do it if money and time were limitless. (He sold it for close to $10K)

But, ever since seeing Matt’s build I wanted to do a (more affordable) build of the Cannondale Hooligan. So I found a used Hooligan on Craigslist with the 3 speed hub I already wanted for $500 (woooot!!)… and got down to business.

I decided to go with the BBS02 with this build…but if I would have done it over I would have used the BBSHD because you never can have enough power. In fact I plan on upgrading the BBS02 to the BBSHD on the bike, as soon as I have some time.

Thicker tires (as fat as I can fit in it) 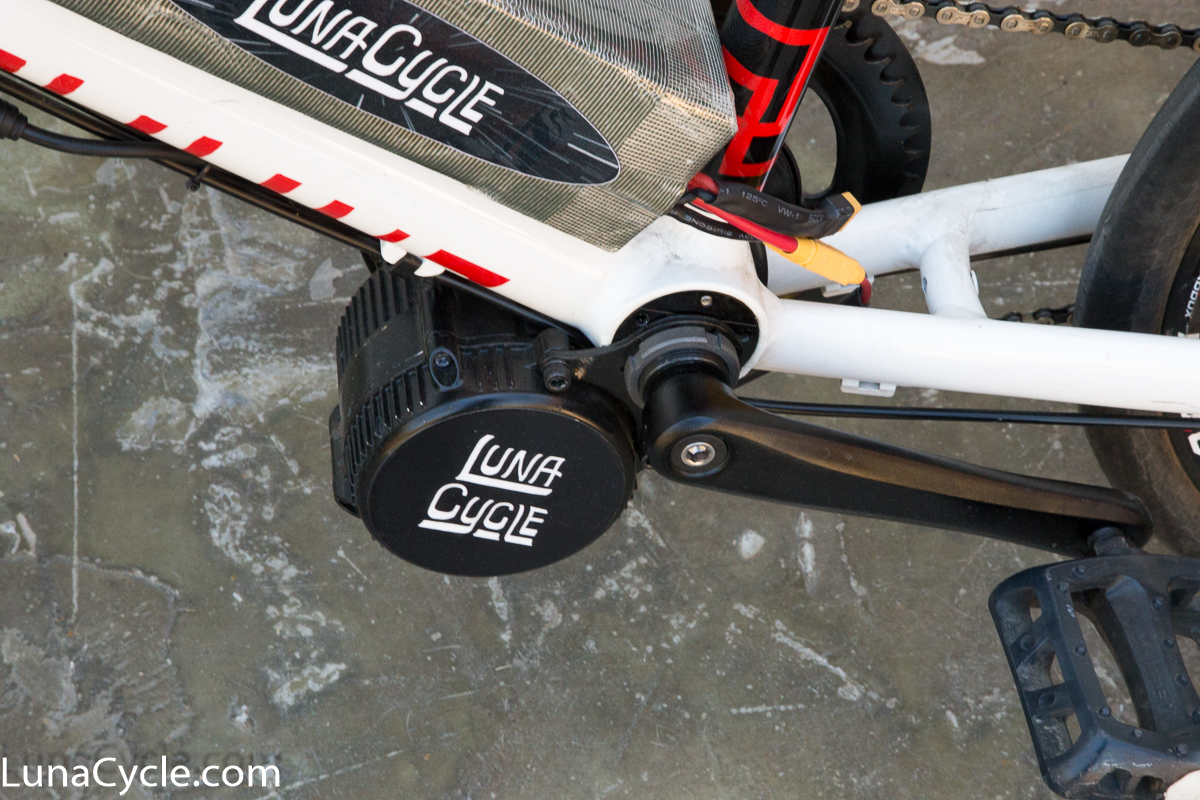 I was really nervous to take apart this beautiful bike, and because it uses a unique bottom bracket? I had no idea if the BBSo2 would fit.

IT turns out the BBS02 or the BBSHD ended up fitting just fine without the need but not without  the help of this BB press fit converter:

The hardest part was getting the old bottom bracket off. We entertained taking to the local bike shop and having them take it off but we ended up using our Luna Big Gun Wrench to take it off ourselves.

After the BB was off the BBS02 bolted right on fairly easily.

I strongly suggest that if someone is going to attempt  a mid drive for the first time that they surf for build logs in this electricbike.com forum thread and pick a bike as a donor that someone has already adapted so you will know what glitches you might run into during building, what size drive to buy, etc.

Why I chose this bike and this motor

I have owned many electric bikes and my most ridden and favorite bike ever was my folding bike. I loved this bike because of its manueverability and its practicality. I love a bike that is easy to get on-and-off of, it reminds me of a kick scooter. Here is a link to an article I did about my folding bike, on a ride in SF.

When that bike eventually just fell apart (I snapped the suspension forks 2X) I decided to build a new bike. I bought a used Cannondale Hooligan, but never got around to building a hub motor into the wheel. The wheels on the stock Hooligan just look to delicate for a hub motor. I did not have the heart to tear out the IGH for a rear hub motor, and because of the unique single arm fork, a front hub motor did not work.

The BBS02 ended up being the perfect solution and finally transformed my Hooligan into the electric bike I had always dreamed it could be. I really thought about putting on the BBSHD because I really like that unit more for its extra power and reliability.

However, on this particular bike, the small size of theBBS02 was a real necessity to try to keep the clean look of this amazing bike.

Why I chose the battery

A bbs02 leaves my options for battery pretty open. Of course I am going with a Luna Cycle battery. Unfortunately the triangle space is limited on this bike. This bike really begs for a custom made 18650 battery and I am considering building a few for this bike and future Hooligan builds, however…Luna Cycle has a great solution already for this bike.

The problem with the Hooligan is fitting a battery on the frame. Of course, it would be easy to install a rear rack, but that would compromise the incredible looks of this bike. Another easy solution is a backpack battery which is how we first rode this bike (Like Miles’ eMoulton)…and that was a pretty cool option. But I really prefer frame mounted batteries because I don’t like to deal with a chord dangling off of me and i want a bike i can just turn on and jump on and forget about it.

Although I really wanted to fit a shark pack in this frame it did not fit anywhere on this bike.

I got real lucky that I was able to mount a 48V 26f 10-Ah pack inside the triangle. The fit is so nice that it needs no triangle bag to hold it. It is pressure-fit and it is just enough pressure not to damage the battery and hold it in firmly.

This 480 watt hour battery is just about perfect if you do not need over a 25 mile range. Of course it would be awesome to fit a 20-Ah battery in this triangle…but if you don’t need it, then it is just a wasted and added expense, and added weight.

After I wrote this story the Luna mighty mini came available which easily fits in a seat bag behind the seat and is a very convenient solution. 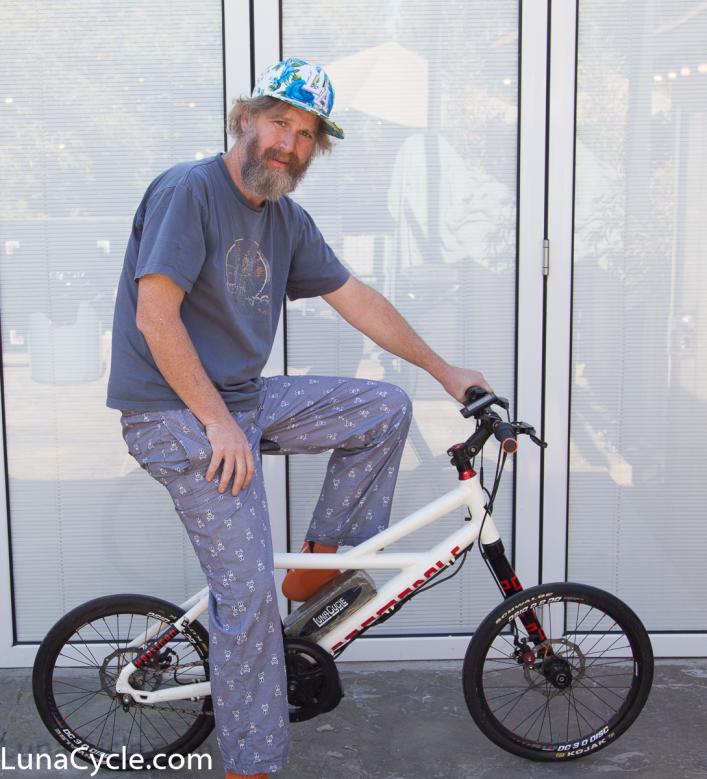 I love the way this bike looks and rides. It has quickly become my favorite ebike for reasons I predicted it would. It is small and maneuverable and at the same time it is very quick.

It has an ultra short wheel base so you need to be careful not to wheelie…but then again if you like to wheelie this thing is a wheelie-machine!

The tires are very thin and this bike is a bit dangerous riding off road. This is a road bike only. If I change the tires this will change. On the road however the thin little tires look awesome and are good enough.

Of course a bike this small and nimble is going to have drawbacks obviously. The small wheels I think are enough for most street riding so that does not bother me. I wish they were just a little thicker so I could take the bike on fire roads etc. But then again I love the way the stock thin tires look enough to where I will keep them until I wear them out.

Of course this bike is not as cushy or as comfortable as most bikes. But comfort is not a big deal to me when riding on the street. But to me, it’s comfortable enough. The “cool factor” of this bike, plus the small size and weight of it?… that makes any discomforts felt when riding well worth it.

Because it is so small, it is easily transportable in even a trunk of a car. You could carry 10 of these in a mini-van and have an ebike riding party on the beach somewhere.

Problems I Encountered after riding

I was really hoping the Sram S-motion 3-speed transmission would be enough but it isn’t. I am not sure if the transmission blew or not but the shifter fell apart after just a few uses. For sure the shifter is delicate and the entire unit looks delicate. The first day riding this bike with a working 3-speed was a dream. But after just one day the shifter and/or the IGH has fallen apart and we are stuck with a single speed. I am not one of those believers in a single speed mid drive and really miss having gears.

When our shop has time I want to put a transmission in the wheel that has proven to take the power….either a nexus 3 speed with roller brake, or I will spend the money and put a Shimano Alfine-8.

When making a decision between the cheap Nexus and the Alfine-8, of course it seems like the cheaper Nexus is an automatic choice. However, I love this bike and feel I will ride it a lot so don’t mind spending a few extra dollars on it to make it perfect. High quality gear hubs like the Alfine-8 and the Rohloff have the advantage of offering high gear ratios. For example the Rohloff offers a 450 percent gear ratio. The higher the gear ratio the better the bike experience…meaning better hill climbing and most important higher top speed 😉

Read about Rohloff on an Ebike here (the ultimate bicycle transmission)

On a small wheel bike like the Hooligan, having high gear ratios are very important because it does not have big wheels to help achieve high gearing. For that reason small 20-inch bikes like this should have a large chain ring up font and a nice transmission on the back…and then they become just as good of performers as big wheeled bikes (believe it or not). 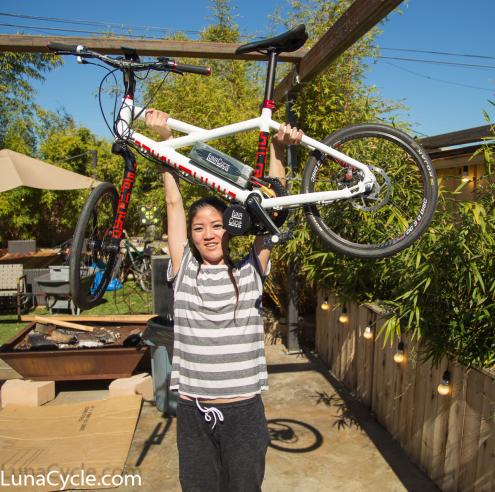 A Note About Weight

This is a skimpy looking bike. It has not fancy thrills in terms of big tires or suspension.

It has a BBS02 motor system that weights in at 10 pounds.

The entire ebike ended up weighing in at 39 pounds…which seems like a lot for such a skimpy bike…but that is realistic. The fact is its hard to find an electric bike that weighs under 40 pounds, when all the cheap talk is done and you put it on a scale.

When you pick this bike up it feels light. That is because it is perfectly balanced and because it is so small it is not cumbersome and easy to throw around.

In the picture you see my 105 pound girl friend easily chucking the bike over her head. The bike feels as light as it looks. 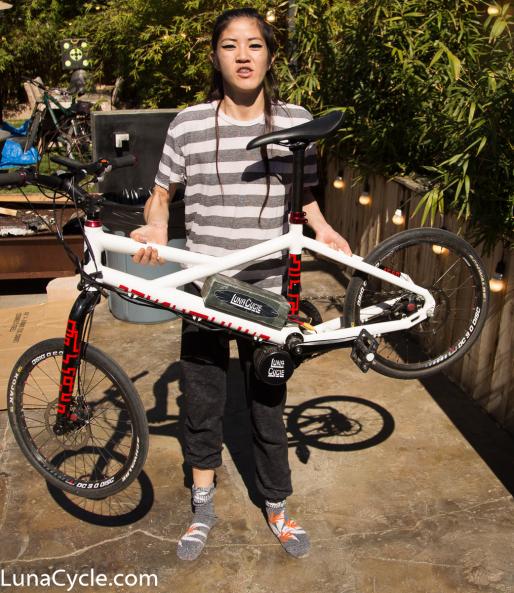 I am always looking for an excuse to build a bike and a “chick bike” is a noble cause.

This thing is so small and cute looking it’s hard not to get a smile from the girls.

Because it is so small, it is un-intimidating to get on and ride.

It is offered in very trendy girl-like colors like lime green.

This is a very cuddly cool looking bike.

Because it is so small it is easy to have around without taking a lot of space.

Complete build thread on this bike

review on hooligan as a bike

I thought I would save a few dollars on getting a 5kWh LifePo4 battery for my wife’s off grid home. Little did I know that this decision

Soldering vs Crimping vs Co...

2 weeks ago I had an incident with my

18 months ago I bought a Chevy Bolt for

Here is an article that you will absolutely never

It’s total hit and miss with them. Same issue,

Great article and very well thought out business venture and

so where is the so-called car battery on howard hughes'