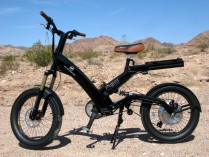 It’s a marketer’s dream: a product that frees consumers from rising gas prices and gridlocked traffic while cutting commuting costs. That’s why two teams of Fox MBAs presented ambitious marketing plans for the Banner Bike at the College of Engineering’s E2E Senior Design Day on Nov. 17, 2011.

The Banner Bike is the brainchild of Temple undergraduate engineers Tan Ha, Bayan Khalighi, Asish Mathew and Robert Stark. Their concept is simple: Bicycles make for great workouts but tiring commutes. Mopeds can be loud and use pricey gas. So the engineers envisioned a solution: a bike that could propel itself up hills and along streets without pedaling or using a drop of fuel.

“While a bike is coasting, energy is being wasted,” Khalighi said. “It would be great if you could capture that potential and kinetic energy as you coast and store it in a battery. Riders could use that energy to propel the bike.”

“The bike is capable of driving itself for 15 minutes without pedaling,” Khalighi added. “It can reach 15 to 20 miles per hour. And the battery charges from less than an hour of pedaling.”

The Banner Bike has the potential to change the landscape of urban travel. Innovations of such magnitude don’t come easily. The bike’s concept was dreamed up a year ago and has been rapidly gaining traction since.

“Last year, some of my engineering students put together an alternative energy booth to celebrate Engineers Week,” Electrical Engineering Professor and Chair Joseph Picone said. “It had a DJ, music and really modern feel. The whole event was powered by stationary bicycles.”

“The stationary demo took off and has been shown around Philadelphia at various environmental fairs,” Picone said. “The result was that our team got funding from HP to further develop the project. As word spread, they got more and more grants.”

Temple’s engineers used the funding to perfect their idea. They knew practicality alone wouldn’t make the Banner Bike a hit. So they made sure its design exuded hip urban flare. It’s light, portable, dead silent and inexpensive – manufacturing costs were driven below $1,000. They hope the finished product fits perfectly into the lifestyles and budgets of urban commuters.

Fox’s marketing team was inspired. The Banner Bike could improve the lives of millions of commuters – 8.9 million of them, according to their calculations. But someone has to spread the message.

“We want to reach out to bicycle commuters tired of pedaling uphill and environmentally aware commuters looking to preserve our ecology,” said MBA student David Lederman. “These issues matter to our audience – and our product is their solution.”

If consumers want an unconventional product, the MBA students figured, they should hear the buzz through unconventional marketing. Don’t overwhelm consumers with in-your-face ads. Instead, let them discover the Banner Bike on their own.

“We’ll create a Banner Bike street team that will attend events frequented by our target market – concerts, athletic events, bars, etc.,” said MBA student Michele Moses. “We’ll encourage people to explore the bikes and ask questions, while handing out free T-shirts reading ‘Global Cooling’ on the front and ‘The Big Chill,’ above a link to our website, on the back.”

Fox’s marketers also suggested launching a social media-based competition called “The Chill Cycle.” Cyclists throughout the country could post Facebook videos proposing “Banner Bike adventures” they’d like to undertake. The winner gets a bike, a stipend and a small video camera. They then embark on a weeklong excursion and share videos with the social media world. 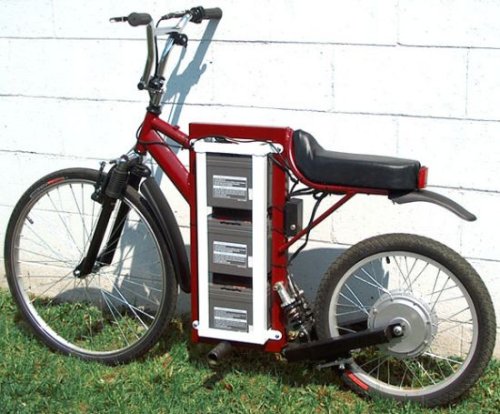 Picone couldn’t be more pleased to see these ambitious plans springing from the stationary bike demo he kick-started more than a year ago. Based on what he’s seen, Picone expects “ambitious plans” won’t be the last chapter of the Banner Bike story.

“Our senior design team has entered the Be Your Own Boss Bowl business-plan competition at Fox,” Picone said. “If they win that they could get more than $100,000. It’s a very nice project that’s taken a life of its own, and that’s what we like to see at Senior Design.”