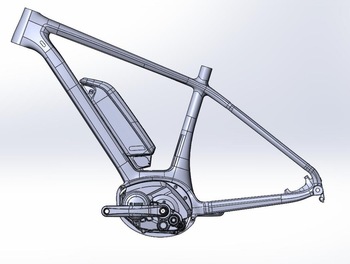 Carbon, Alloy or Steel: Which is the best for ebike frames?

There are so many ebikes out there on the market right now it’s unbelievable. While most of the ebikes out there are made with alloy frames, there are many with carbon frames and even a sprinkling of ebikes out there with steel frames as well. This article is about what I believe the benefits and drawbacks are to the different frame types and which kind of frame you should consider when shopping for an ebike.

I estimate that over 90% of the production ebikes on the market right now all have alloy frames. They are cheap to manufacture and the alloys that they have out now are extremely strong and work well. The frames are often butted adding more material where the joints are so that the tubes can be lighter weight and the joints can still be strong. I have broken several alloy frames, but that is not saying much. One frame broke because I used a seatpost shim for a Thudbuster. Nowadays I just buy a Thudbuster LT with the right diameter tube for my bike, but I used to have just one Thudbuster that I shared between about 10 ebikes. Another alloy frame I broke by having a BBSHD drive unit touching the chainstay and then the chainstay broke. This problem is easily avoidable by shimming out the drive unit so you can slide a piece of paper between the secondary reduction and the chainstay. Both bikes have been repaired and I’m still riding them, but the repairs were not heat treated so the repairs are not as strong as the original frame.

When repairing alloy frames you can either use alloy tubing to reinforce the break and slather the crap out of it with 2 part epoxy (sand the paint off first) or you can weld it with a TIG welder and use a lot of extra material. TIG welding aluminum is not for beginners, so spend $100 and have a welding shop do it. They will reinforce the break with extra material and it’s much less likely to break again. Un-heat treated alloy welds are 40-60% weaker than heat-treated welds. This is one area where steel is a much more preferable material (you only lose about 10-20% the strength of the material with steel).

The other thing to talk about here is something that no bicycle manufacturer ever wants to discuss, metal fatigue. Over time all bike frames develop microcracks and the frame gets weaker and weaker. The harder you beat on it and crash, the more microcracks you get. There is no way to see these cracks until they develop into real problems. Alloy bikes tend to fail pretty catastrophically, unlike steel which can often bend and stay together, alloy frames will tend to have clean breaks. If you are curious about how different frame types stand up to stress over time check out this article which shows that steel was beaten out by alloy and carbon fiber, but not necessarily because of the materials, but rather how the frame was put together.

If you are putting a hub motor kit on the rear of an alloy frame you should always use a torque arm to keep from destroying the frame. I think everyone should avoid hub kits and get a mid-drive kit, you’ll be happier in the end.

Steel is real, no really

In the mid 80’s I inherited my sister’s steel Schwinn 10 speed road bike. That bike completely changed my life and I got into several bad accidents with that bike and the frame never broke even when the wheels got bent back on themselves like a taco. I own two steel ebikes, the 3000W Soul Stomper and my 2500W Ludicrous BBSHD Phatter Phukker snow bike. Neither bike has had issues with the frame yet, although the Soul Stomper is starting to show rust where the clear coat has chipped away. Rust and weight are probably the biggest disadvantages of steel frames.

When looking for frames on fatbikes that will fit a Snowshoe 2XL in the rear, you’ll find that a lot of the frames that fit that particular tire are actually steel. It seems like with steel you can make the chainstays much wider without worrying about structural issues, or at least that’s my guess as to why there are so many more steel frames that fit the 5.05″ tires. I love the 2XL PSC version, it is the best snow tire I have yet to try.

Riding on the road with a steel frame means a lot more comfort. Alloy frames transmit every bump into your body, but a steel frame seems to absorb a lot of the vibration. I also really love steel front forks, whenever I have an alloy fat fork fail, I always replace it with steel. When it comes to stiffness I think carbon forks are the least comfortable, they really seem to transfer every little pebble into your body. I’ve tried a couple of carbon forks, but I always end up going back to steel forks. If you’re mounting a front hub motor, you should not do it on any kind of fork but a steel one.

I think for serious cargo bikes, steel is the only way to go. If you want to build an alloy frame that will carry a lot of weight it will end up being almost as heavy as a steel frame anyway. Steel is unmatched in durability if you’re thinking of having a build that will regularly carry over 500lbs, it would be crazy to build it out of anything else.

Carbon Fiber can be super light and strong

In many ways carbon fiber is the ultimate material for making ebikes. It is incredibly light and strong compared to anything else. There are issues with carbon fiber, not the least of which is that there is a lot of different qualities of carbon fiber manufacturing out there. I have bought carbon stuff on Alibaba\Aliexpress that is absolute crap and has broken on the first use (but it was cheap) and I have bought carbon fiber stuff from American companies that has been pretty tough. Over the last 20 years I have resisted the move to carbon fiber frames on my bikes, but last year I relented and bought a KHS Prescott for $1400 during one of the Lunacycle sales and I have completely fallen in love with it.

If you own a carbon bike you can’t just throw it around in the bed of your truck like you would with a steel ebike. If the frame gets a sharp impact it can break the fibers and cause a weakened frame that will later fail. Carbon tends to fail pretty catastrophically and while it is not difficult for a professional to repair, the repairs never look as good as the original bike. Also if you want the repair to look like absolute crap, it can be done cheaply by just throwing more glass on top of the break, but if you want it to look good it’s really going to cost you a pretty penny. Most people when they break a carbon frame just throw it away and buy something else.

Be aware than many carbon-fiber bikes on the market do not convert well to mid drives. The bottom bracket on most carbon bikes is extra thick and that means that it can interfere with the drive unit being able to slide between the BB and the frame. If you are in doubt about whether your carbon bike will take a mid-drive frame then take a picture of your BB and send it to the ebike kit seller and they should be able to tell you if it will work. You should also make sure that wherever the drive unit is hitting the carbon frame that there is a little bit of padding. I use the Velcro tape and wrap it all the way around the frame which makes a nice ‘pillow’ for the drive to bump against.

Titanium is more expensive than any other option, but for some it might be the best choice. I have never owned a Titanium bike, although I hear they are pretty amazing. It is hard to weld Titanium well, so don’t expect to buy a cheap Chinese Titanium frame and have it hold up to abuse forever.

I think that if you want the highest performance out of your ebike with the lightest weight then carbon is your best bet. If you have a cargo ebike that is hauling massive loads then a steel frame with a high power mid-drive is probably the way to go. If you want just an inexpensive ebike to get around town, I don’t see any reason why alloy frames won’t work fine. The most important thing is to have more fun than everyone else, and be green at the same time.