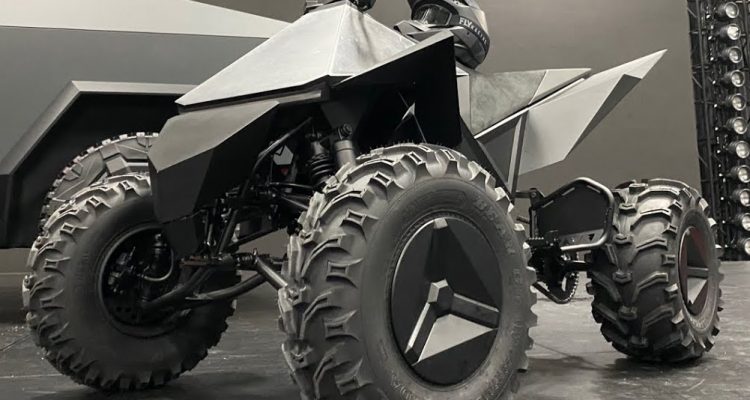 Could the Tesla Cyberquad usher in a new era of silent hooliganism?

Before I even start writing this article, I have to confess I’m not a fan of Quads. Every time I’ve been on one I feel like I’ve come within an inch of getting killed or seriously injured, but I also have to admit they are pretty darn fun. At the Cybertruck release, Elon announced ‘one more thing’ and showed off what essentially appears to be a Yamaha Raptor 700R SE with some fancy body panels and an electric motor, built-in charger, and battery. The Cyberquad seems to have a built-in charger that plugs into the bed of the Cybertruck to charge off the main battery. I really have to admit I loved the idea of the Cyberquad and I think it pairs well with the Cybertruck. In fact, the in-bed charging will be a boon to Sur-Ron and other electric Motocross riders anywhere.

This article talks about the Cyberquad, the complete lack of any competition for electric ATV’s even though they are the ideal deer hunting machine (they’ll never hear you coming) and what I think the future holds for Electric ATV’s.

The Yamaha Raptor 700R SE is a top-of-the-line ATV that is available for $9300 + $425 destination charge. I’m assuming that Tesla has a deal with Yahama to source the body without an engine in it and they can add their electric motor, battery, fairing and charger to it. That almost certainly will put the price somewhere in the ~$10,000 range. Tesla is saying that people who have ordered the Cybertruck will get dibs on the first ones of these, which is cool because I ordered my Cybertruck to intimidate my meth-head neighbors. This will be the first new vehicle I have ever purchased, and hopefully my last as well.

The Raptor has a wet weight of about 422lbs, I expect the electric version to be a bit lighter, especially if they ditch the transmission which I’m guessing they have. The left clutch is still showing on the Cyberquad though so unless they moved the rear brake up to the handlebars then they may have chosen to keep the transmission, which is very disappointing. Transmissions add weight, complexity and are completely unnecessary for electric motors which have more HP over a much wider range than ICE engines.

One of the things I found particularly disconcerting is that the Quad they showed on Cybertruck night was either 2WD or they fitted front electric hub motors into the front wheels. If they used front hub motors, I would be very surprised, it’s also worth noting that the stock Raptor 700R SE is only a 2WD model. I think it is a huge mistake for Tesla to try to enter the Quad market without having a 4WD model. Actually, since there are few people who actually sell Electric ATV’s now, they are essentially creating a brand new market segment by siphoning off consumers of ICE ATV’s.

What would the price/specs on this thing be for me to want to buy one?

If they released a 4WD electric quad in the sub $5000 range with over 40+ miles of range they could absolutely dominate the US electric ATV market. I don’t think that would be possible if they are outsourcing the body and just adding a motor and batteries. If they built the entire unit in their China factory then they might be able to hit that price point, but not with any kind of meaningful warranty. At this time I’m plenty happy with my $3300 Sun Ron Light Bee which is the defacto standard to beat in the E-moto world. It’s much more likely that Tesla will release its Cyberquad in the $7000+ range which will still find an audience, but it won’t convert that many people over from ICE Quads. Normal ICE quads are frighteningly powerful and the 2 stoke versions are doubly so. Any self-respecting hooligan plunking down hard-earned cash for an electric version will want insane performance and enough range that they never have to worry about getting stranded in the woods.

Will Tesla create an entirely new market or will they get beaten to the punch by other more entrenched ATV dealers? The future remains to be seen, but most ATV owners do not fit into the typical ‘Tesla’ demographic. In order to get them to buy an electric ATV they have to believe they are getting a product that is better than a comparable gas ATV, which can be a tough sell.