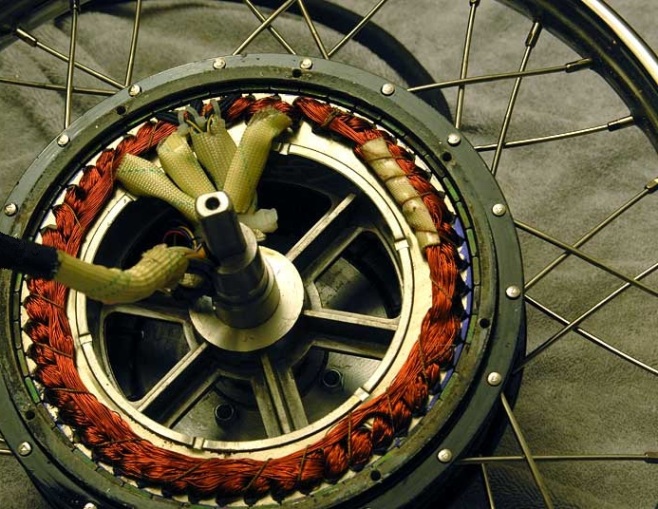 Zvonimir is an engineer who lives in Croatia, between Italy and Greece on the beautiful Adriatic Sea (ES member HAL9000V2.0). In a recent story, we told our readers how he developed the Greyborg Warp frame, so builders could have the option of an electric bike that was heavy-duty, and could also hold the largest possible battery volume. It is a big success with over 200 frames sold worldwide to date.

But Zvonimir doesn’t just design things by using computers, he and his friends love to actually ride high powered E-bikes. The Greyborg frame used a rear hub-motor, so they could leave as much frame space as possible for the battery, and the most powerful rear hub available was the Crystalyte 5-series. Specifically the 5404, 5405, and 5406, which have large 40mm wide stators and magnets.

The 5-series motors are very large, and they are also very heavy. Zvonimir wondered if he couldn’t design a better motor. Just like any other engineering problem, he studied why hub-motors were designed the way they are, so he could understand all of the options that were possible. Using computer modeling and analysis, he calculated the diameter that would provide the optimum balance between power and weight. He knew he was onto something good when the analysis showed he could make more power than the Crystalyte 5-series with a smaller diameter, which would save a great deal of weight.

the Cromotor next to a large-diameter Crystalyte 5406. Pic courtesy of ES member zombiess, who is also the North American dealer of Greyborg frames and Cromotors.

For the first version of the motor he wanted to design, he initially found an existing lamination that fit his needs. Laminations are thin steel plates that are stacked together to form the steel cores of the electromagnets that make-up the stator. These electromagnets are turned on and off at just the right moment to make the motor work. Zvonimir already knew…he wanted this stator to be as wide as possible. This would allow for a lot of copper mass in the windings, and that meant that this motor could take a LOT of amps without overheating. 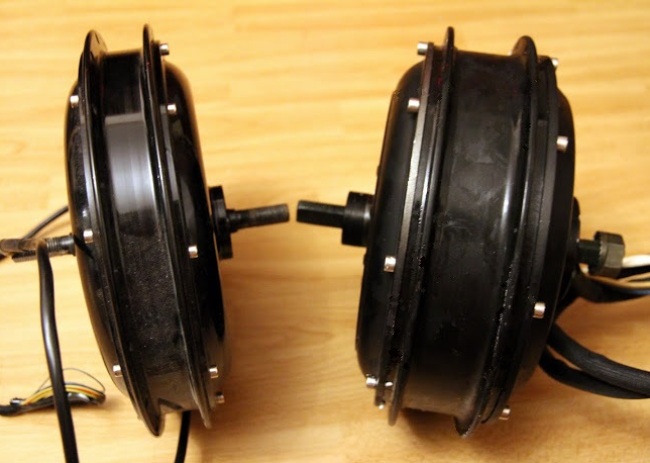 Here is a common 9-Continents (9C)  hubmotor on the left, with plenty of room for 7 sprockets. The V1 Cromotor used as many existing parts as possible to keep the price affordable, but it puts its money in the places that count, for generating the best power possible. Notice the 9C wires exit the motor through a hollow axle. The Cromotor axle is larger, and it is NOT hollow! Pic courtesy of ES member zombiess.

Zvonimir and his friends were very experienced with riding powerful E-bikes, and the more you know about the user-profile of a product, the easier it is to produce a good design. The optimum design voltage for this motor was going to be 72V, and everything that limited the amps to the motor would be maximised to provide for the highest possible amps.

Zvonimir is quite proud of the fact that the electrical genius Nicola Tesla is from Croatia, and he decided to name this new powerful beast the Cromotor. There is only so much space between the drop-outs on the rear of a bicycle frame, and some of the early Greyborg Warp builders used a rear hub-motor that had a 7-speed gear cluster. however, many would be happy with only a single speed…if that meant that they could have a wider motor, which could use more amps. 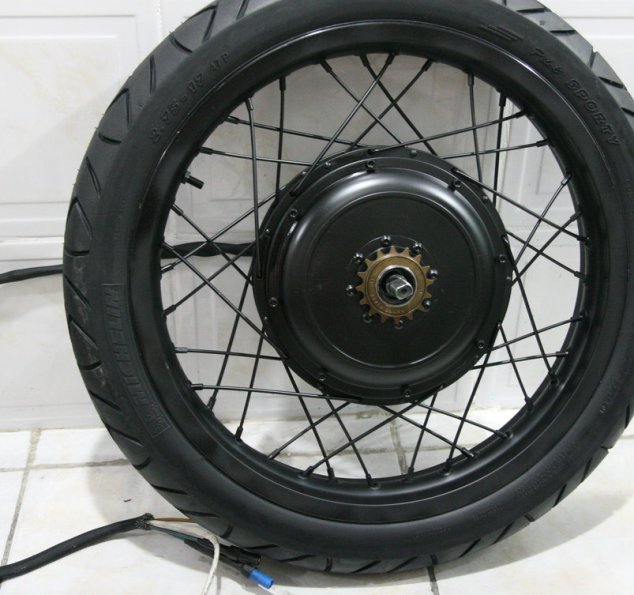 Here’s a Cromotor with the normal single-speed freewheel, and the common fat moped tire. Pic courtesy of ES member gensem in Brazil.

The first Grayborg frames used a common bicycle 135mm spacing between the drop-outs, and the motor did not have the mounting flange for a disc brake on the left. The possibility of using regeneration as a brake was an option, but he also designed a very large diameter disc brake that was mounted completely outside the hub, as an experiment to see if that was a workable option. This would allow for a rear disc brake, while still keeping the 50mm wide magnets. 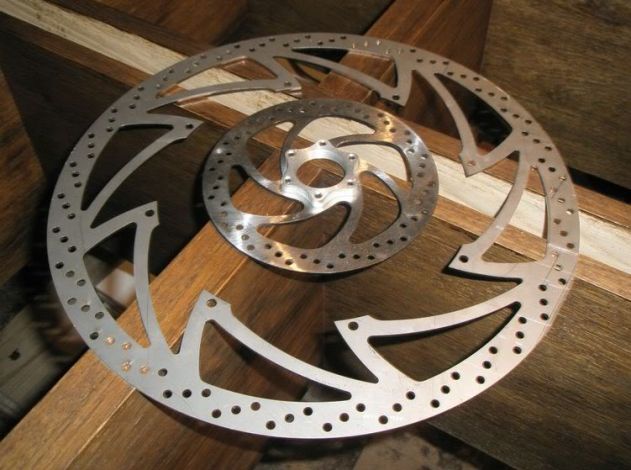 Here is a prototype of the extra-large diameter rear brake disc, but Zvonimir eventually decided against using this.

Although this worked, he understood the value of being able to use existing brake components, so he tried widening the drop-outs of the Greyborg frame to 155mm. This allowed the 50mm wide stator and magnets he wanted, and also room for a conventional disc brake on the left. 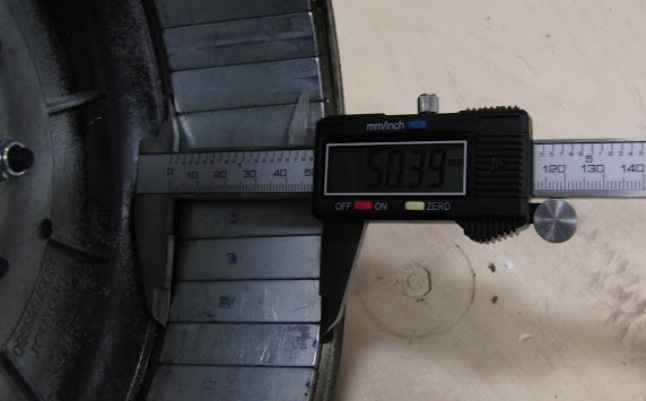 There are many factors that must be taken into consideration when designing a motor. There are benefits to making the diameter larger, but that would also make the spokes shorter, which would reduce the spokes ability to flex in order to absorb shocks. Fans of the Crystalyte 5-series are experienced with broken spokes. Reducing the motor weight helps, and using a smaller diameter to allow longer spokes also helps. 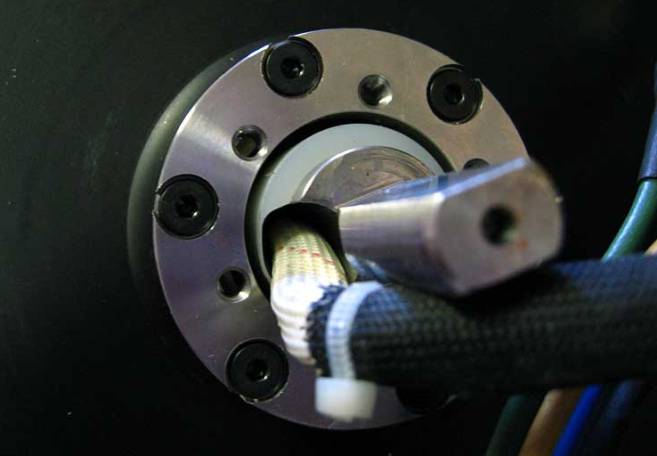 Pic courtesy of ES member zombiess in California. The wires exit the left side of the motor through an extra-large diameter bearing so the axle can be solid. NO HOLLOW AXLES!

The initial production run of Cromotors proved that their design criteria was solid. But now that they had a proven product, they began using computer modeling to tinker with minor variations to see where they could improve the motor for the next batch. The most noticeable difference in the V2 Cromotor is the cast aluminum core, instead of the first versions stamped steel core. The aluminum mass acts as a heat sponge, to soak up the temporary heat spikes of acceleration, and then to dissipate the heat over time during the lower-amp cruise phase .

Also, now that they knew they had enough customers who understood the benefits of this type of motor, they could invest in a custom stator lamination of their own design. The first version used a common 0.50mm thick laminations, but the V2 uses a thinner 0.35mm lamination that is also made from a higher quality of high-silicon steel. Higher volts would equal higher RPM’s, and some customers wanted to use 100V-125V instead of 72V. Thinner laminations now allow that, without having excessive eddy-current losses, which would convert too much of the batteries watts into waste-heat instead of work. 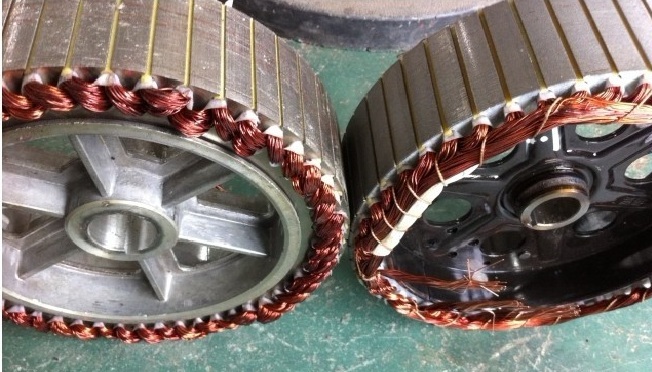 The original steel stamped core is on the right, and the cast aluminum V2 core is on the left. The aluminum core is actually heavier, but it provided a dramatic improvement in the motors heat-management. Pic courtesy of ES member accountant, in Croatia. 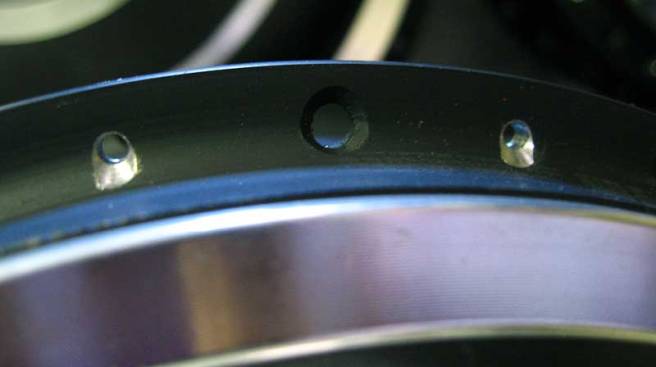 18-FET controller is the minimum, 24-FET is recommend, set for maximum of 150A phase current. 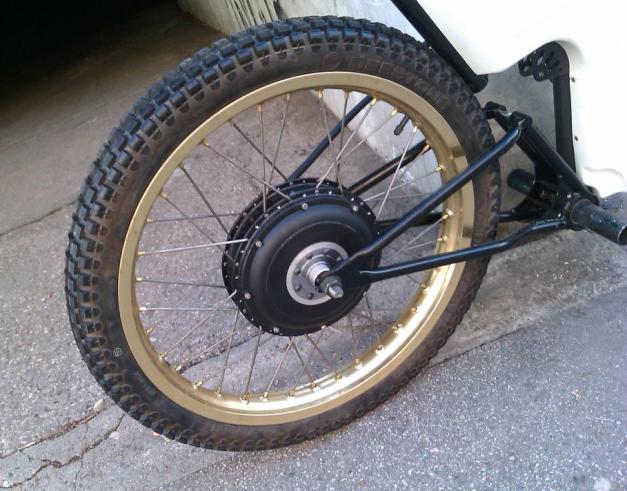 This is the optimum wheel option. A V2 Cromotor laced to a 21-inch motorcycle rim, using 4mm spokes (8-Ga). Pic is courtesy of ES member accountant in Croatia.

The standard width between the two sides of a bicycle frame where the rear wheel axle is attached is 135mm, and this is called the “Drop-Out” width. The Greyborg drop-outs are 155mm to allow a single-speed freewheel, a common bicycle disc brake, and a 50mm-wide stator.

The Greyborg Warp [STEEL] frame and the Cromotor are designed to work perfectly with each other, but Zvonimir is aware that some customers want to use the Cromotor with other bicycle frames. North American Cromotor dealer zombiess carries special-order Cromotors with the axle shoulders cut to 145mm wide, to make it easier to fit the Cro to a wider choice of frames without needing custom-made drop-out adapters. 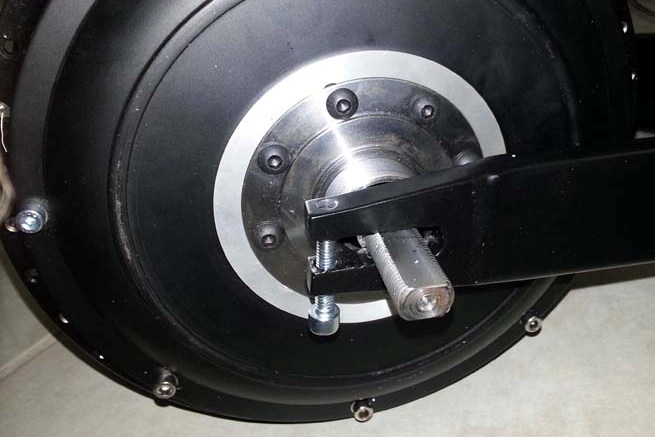 Here’s a close-up of the clamping drop-outs on the new Greyborg Warp swingarm.

However, several Cromotor owners have gone to the extra effort and expense to source custom-made drop-out adapters. This allowed them to use the Cro in a frame of their choice.

These professional-looking units were ordered to be CNC-machined by ES member madin88, from Austria 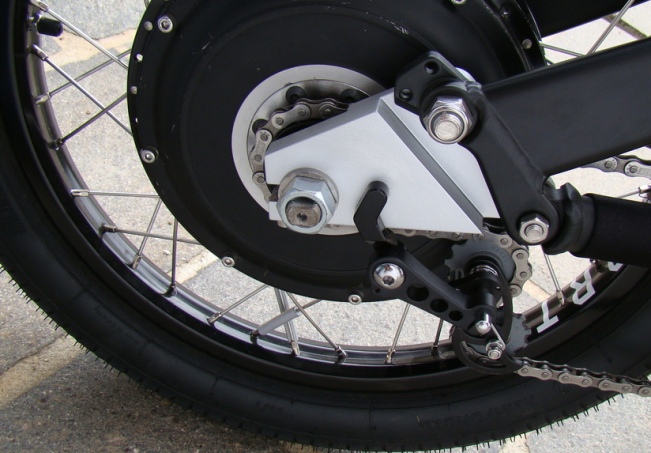 These custom drop-outs were needed to fit the Cromotor onto a Votec VR150 frame.

There are many off-road enthusiasts who like the Giant DH Comp frame, and many of them wanted to add a rear hubmotor, but the stock drop-outs used a “through axle”. ES member kiwi (from New Zealand) designed and ordered a batch of custom drop-outs that are laser-cut. It uses several layers of stainless-steel plate that are TIG-welded together, and feature a clamping bolt so that it also acts as a very strong torque-arm. 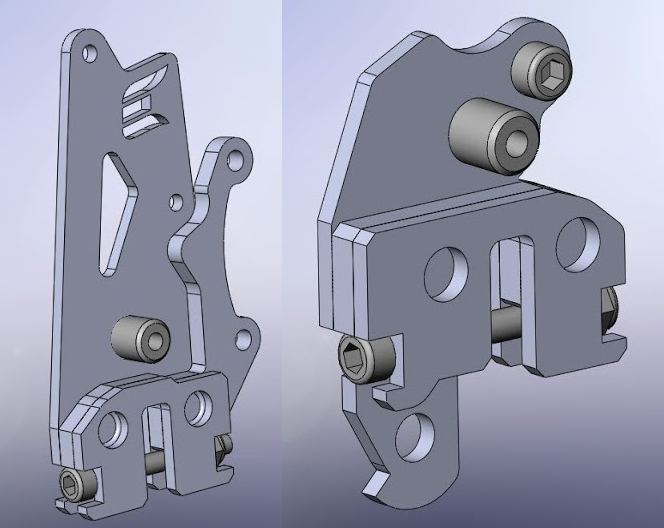 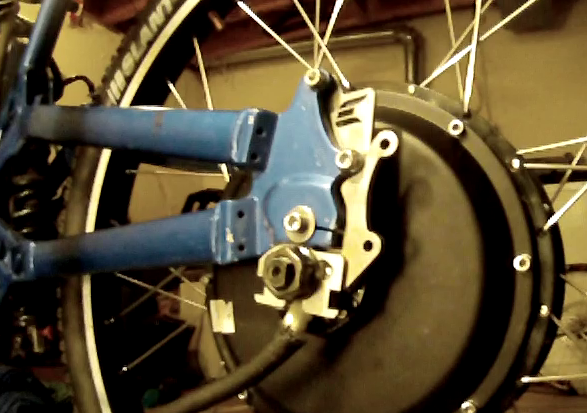 With over 500 Cromotors sold worldwide so far, there are plenty of E-bikes to feature with a Cromotor on them. In fact, keep an eye out for the custom build we will feature this month, but until then…here are two great examples of a Cromotor E-bike. The first one is a daily-commuter owned by Alan B from hilly San Francisco. He chose the bullet-proof “plug and play” Greyborg Warp frame that the Cro was designed for. The second E-bike here is a Cromotor in a Torque Raptor frame by ES member snellemin in Texas. 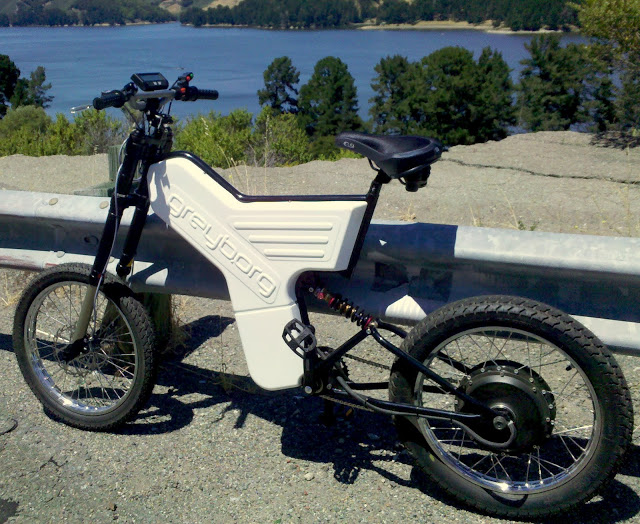 ES member Alan B has his Cromotor in the Greyborg Warp frame that was designed for them to go together. 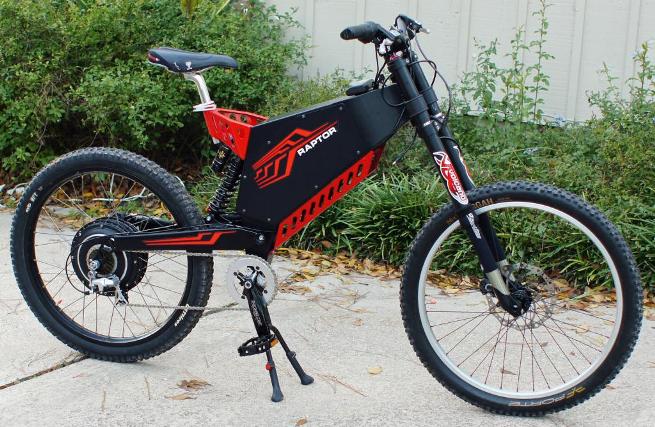 This Cromotor is mounted in a Qulbix Raptor frame by ES member snellemin in Texas.

One of the first questions builders ask about the Cro is “How fast will it go?” The following list is provided by the North American Cromotor dealer, Jeremy / zombiess:

All speeds and amperages listed assume you are on level ground, and the combined weight of the rider and E-bike weighing 275-lbs / 125-kg. The “wheel” number is the outside diameter of the tire in inches.

If you don’t have a local shop that you feel confident with them building up a wheel for you using a Cromotor, consider using Volt Riders, a partner with “Holmes Hobbies” in Columbia, Missouri.