This year, a few weeks before Interbike 2013, Currie has announced a focused  product line that looks like it will make waves in the ebike market. It really seems like Currie has lifted their game and will not be outdone by recent ebike offerings from other manufacturers such as the Specialized Turbo, the Neo Jumper, and the Stromer St1.

The 2013 Currie  line can be broken into three groups:  the mid-drive Bosch powered Haibike, the battery in the seat tube Eflow, and the Izip line which features yester-year models from Currie, such as the Metro and the Zuma which have been redone and improved. 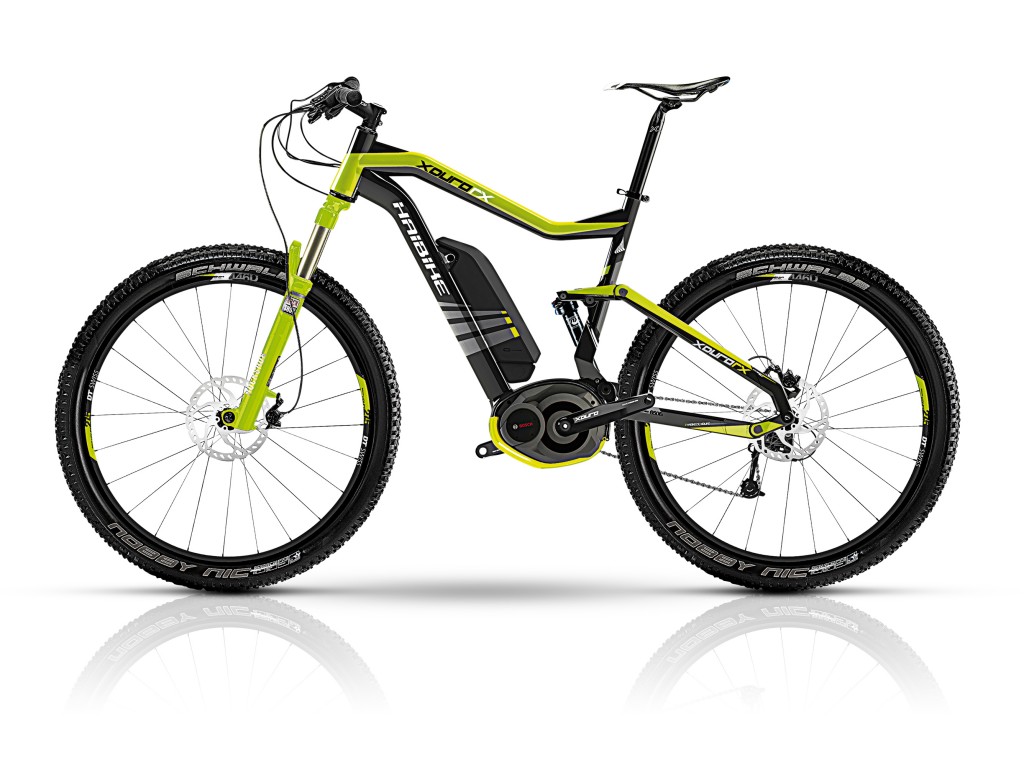 When I test rode electric bikes last year at Interbike, one of  the most impressive bikes I rode was the Haibike.  It was a full suspension mountain bike with the Bosch mid drive which is known to be robust and efficient (read our Bosch Cannondale review). Although the Bosch mid drive is only rated for 250 watts, because of the mid drive working through the gears the bike felt a lot more powerful. The bike felt like riding a high end mountain bike, where as most ebikes feel like your riding a Walmart special bike with an electric assist on it.

The German-based Haibike’s Xduro line of pedal assist-only e-bikes features both hardtail and  dual suspension frames spec’d with high-end components and powered by Bosch’s new  “Performance Line” mid-motor drive system optimized for the U.S. standard of 20-MPH.  Currently there are no bikes offered  in the USA market  using the Bosch system, which is one of the two most popular ebike mid-drive systems in the European market (Panasonic being the other). It seems like Currie will have an exclusive on Bosch drive systems in the United States.

To get an idea what this drive system is capable of climbing wise  read our review of a Bosch Cannondale on a mountain ride and see this video of a Haibike climbing a steep ski jump for a publicity stunt.

“Our five Haibike offerings hit all the major North American bike categories” said Currie Technologies President Larry Pizzi. “The key bikes in the line will be the RX 29” hard tail because of its price point, and the Super Race because of how unique it is.”

The $7800  “Super Race” seems like the Haibike answer to the  $6000 Specialized Turbo. It is quite a statement that Currie, a company that its best seller is its $500 Trailz (read review) is coming to market with an ebike that is so expensive….even more expensive than comparable competing bikes. 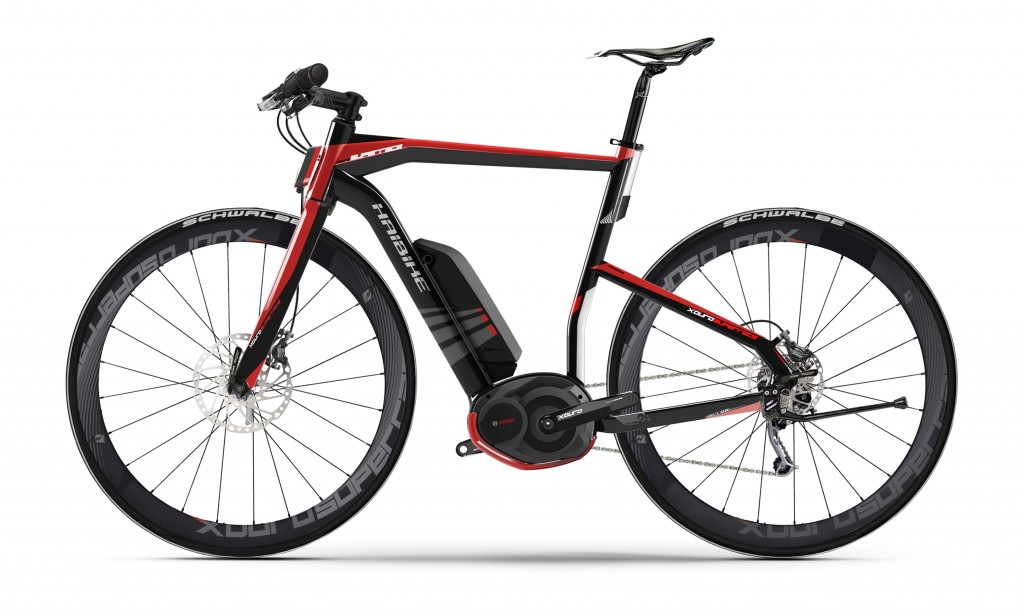 Each Xduro frame consists of hydro-formed aluminum tubes and a new-for-2014 gravity-cast bottom bracket, where the Bosch torque-sensing mid drive system is housed. The new casting protects the motor and results in a lighter frame compared to previous mounting methods.  Benefits of locating the motor in the bottom bracket include low center of gravity, power transmission through the chain to the rear wheel at higher and constant rotation speeds, which results in lower operating temperatures, and allows front and rear suspension to operate normally.

The new Bosch System for the U.S. market is more powerful than offered in Europe (350 watts vs. 250 watts) and has a faster top assisted speed then its European counterparts  (20 mph vs. 15 mph) and has a sleek new down-tube mounted battery pack with 400 Wh of  capacity. 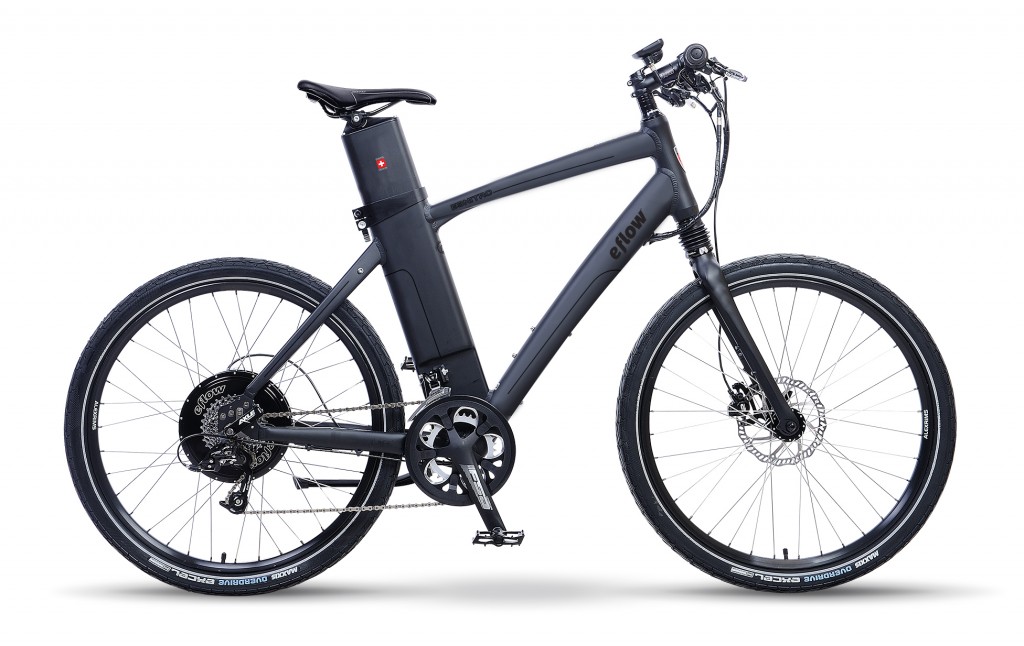 The Eflow is the uniqe designed high end electric bike Currie released last year. It has the battery mounted in the seat tube, which can easily be removed for swapping or charging. At last year’s Interbike, Currie introduced to the North  American market the eFlow Nitro, a performance commuter bike designed by Swiss design  firm Flow AG. At the 2012 Taipei Cycle Show, the eFlow Nitro won an iF Gold Award during  the International Bicycle Design Competition, the only electric bicycle to ever receive this  award. 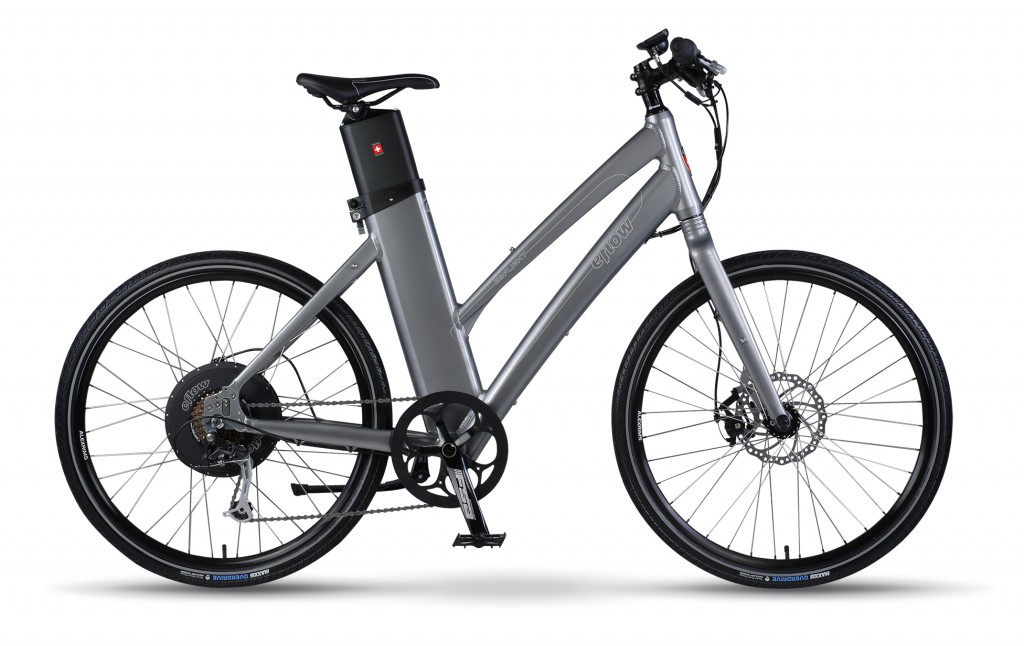 This year, Currie has announced a 20 inch wheel, folding version of the Eflow. The Eflow Fit has a 350 watt motor and will retail for $3500. 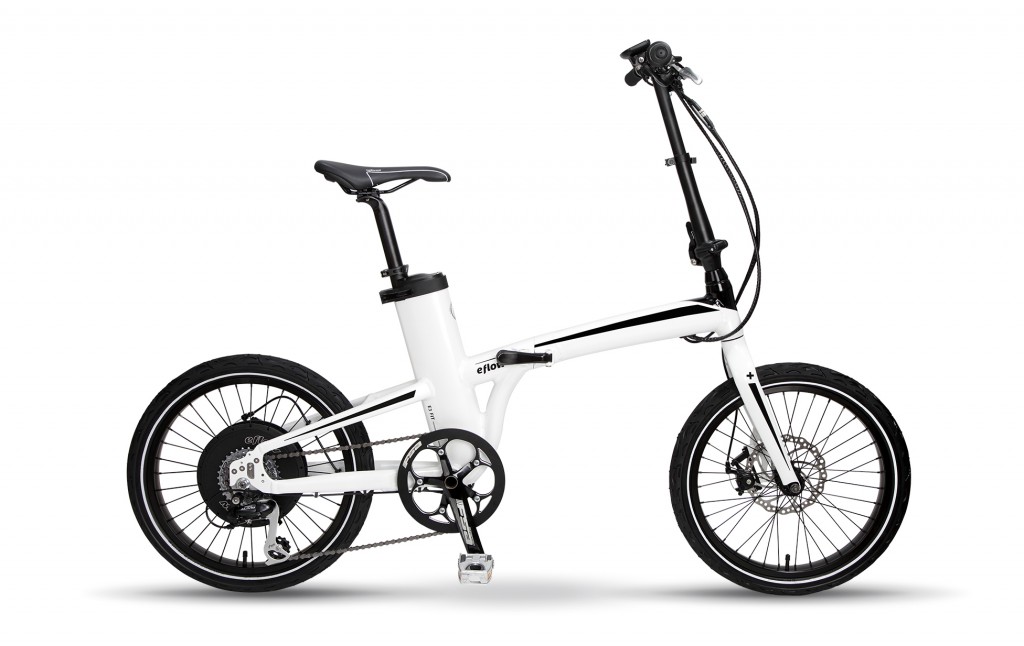 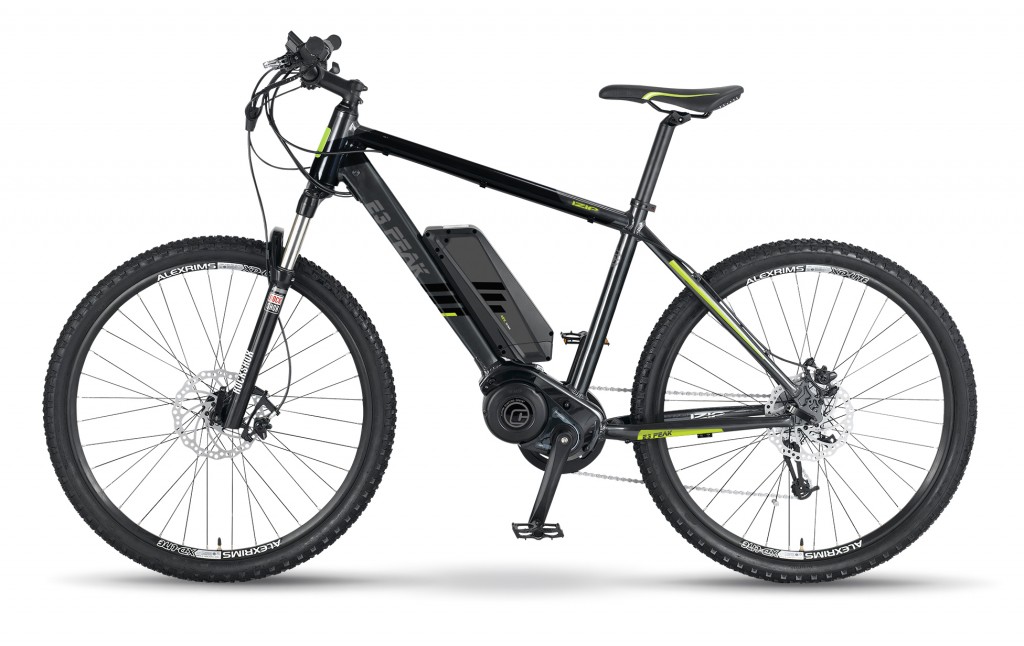 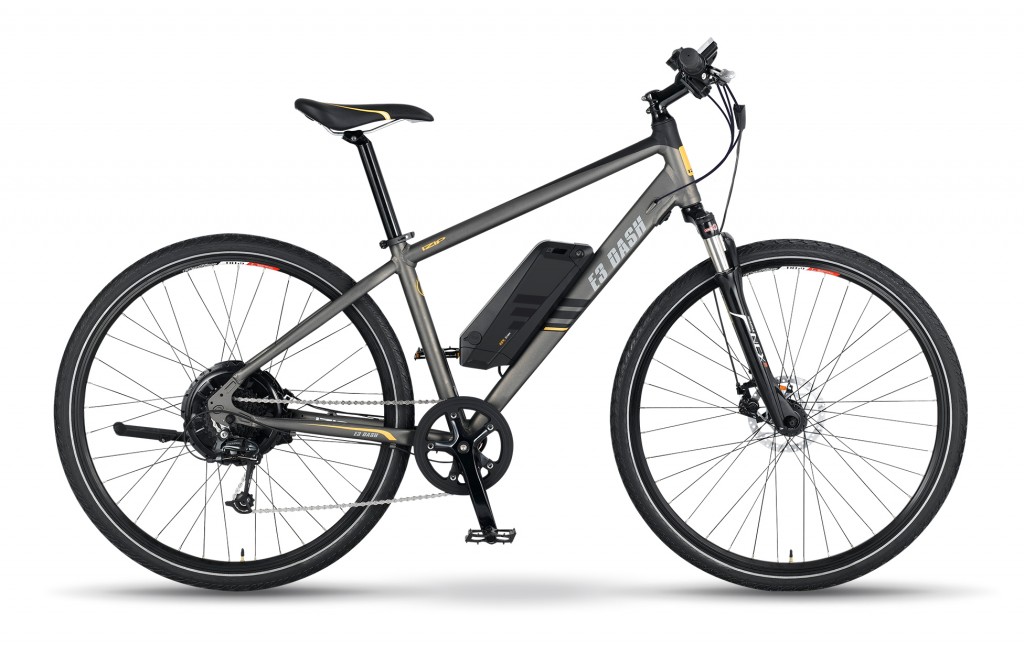 The Dash is a street/urban bike with a 500-watt, 48-volt rear hub motor, which can propel the bike to 28-mph (45km/h) in pedal assist mode and 20-mph (32 km/h) in throttle-only mode. This is a big step for Currie to introduce a bike this fast (they are usually very cautious about releasing an ebike that can be considered “illegal”) MSRP is $2500

The five other Izip models for 2014 are models returning from last year…some of which have been changed drastically.

It looks like Currie made some big visual improvements to their Izip Zuma: 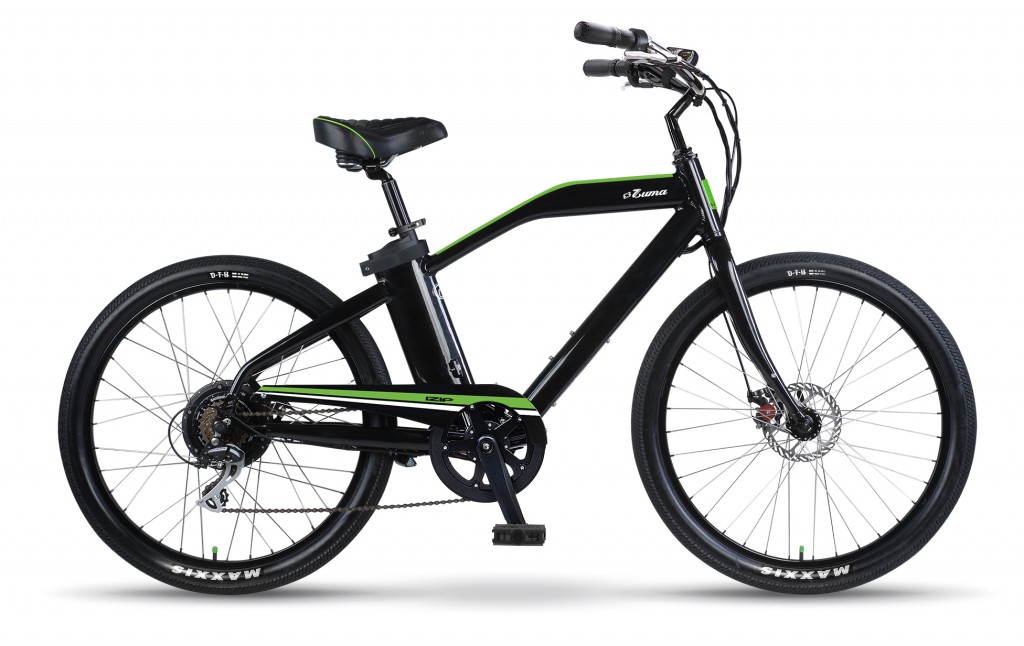 The biggest difference we see is the Zuma no longer has the battery pack welded to the rear rack like in the previous model.  The Zuma now has a sleek purpose built frame like most of the other Currie bikes. At last Pedego might have a worthy competitor in the electric beach cruiser market. The Zuma above looks much sharper than the previous Zuma models.

It’s interesting that the Izip Metro (read review) has lost its downtube-mounted battery from last year for a battery mounted in the seat tube as well. The Metro seems to have an all new look, with a less flamboyant color scheme, with better color coordination and better looking handlebars. 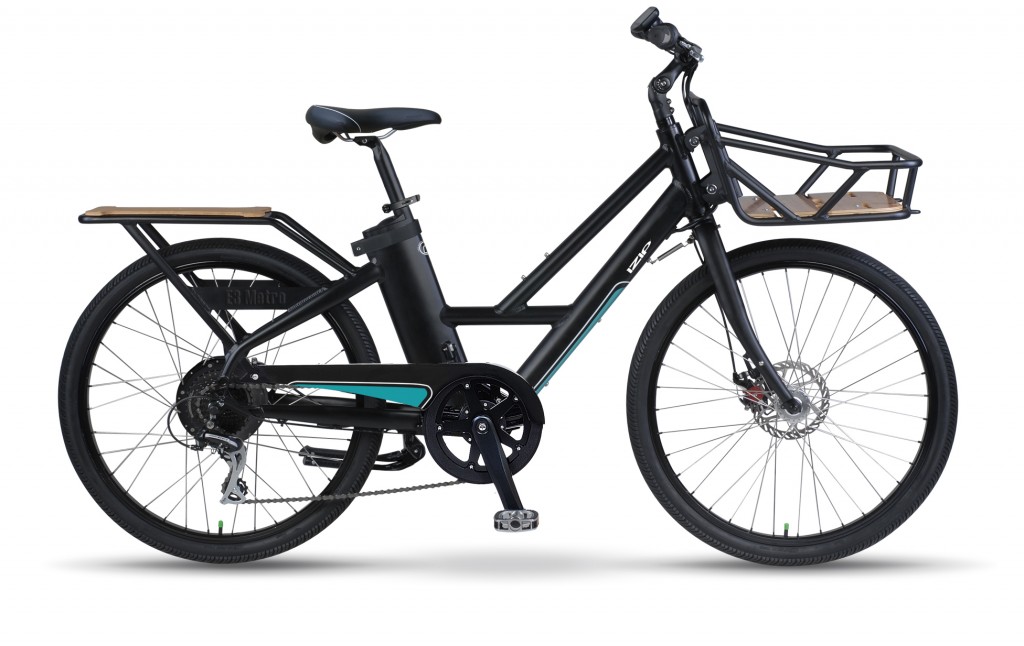 Currie it seems is making big moves to improve their mid to high range product line. This should be an exciting year for Currie.

I will report further on these electric  bikes when I see them in person in a few weeks at the 2013 Interbike bicycle show in Las Vegas, and soon will have reviews of each of these bikes as they come to market. Let’s hope they perform as well in person as they look on paper.