Nik from Italy sent us pictures of his recently finished home-built mid drive mountain bike which is indeed another clean and elegant example of what can be accomplished from a garage build.

He calls it the “Spider Bike” and it  is powered by a 500W Cyclone motor.  Although 500 watts does not seem like much when compared to various hub motor powered E-bikes, this is a mid drive (as opposed to a common hub-motor), and mid drives are the ultimate in efficiency, especially when it comes to hill climbing (see our article on mid drives). With 500 watts you can easily use this bike as “an electric chair lift” to slowly but surely make your way to the top of a mountain, and then bomb your way down. This bike does not use derailleurs, but instead uses in IGH (internal geared hub) transmission, the German made Rohloff. (check out our article Rohloff on an electric bike)

The holy grail of mid drive bikes is full suspension mountain bikes which take full advantage of the mountain climbing capacity and perfect weight balance a mid drive offers. (Take a look at our mid-drive performance videos for more illustration)

The bike has a 36 volt, 12-Ah, 432-WH, LiFePO4 Headway battery pack with a BMS.  As you can see Nik took the time to elegantly package his cells and BMS. This pack is better built than many commercial packs I have seen. Notice he took the time to include an integrated charge port. 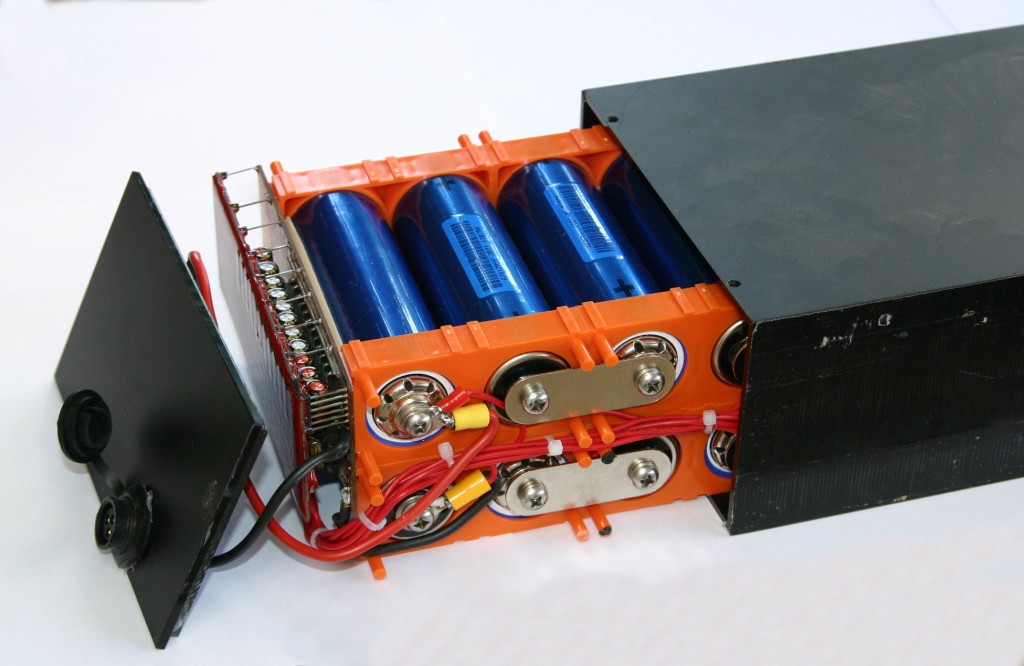 To achieve a decent full-suspension mid-drive is a hard task to accomplish.  Not only does the motor need to be mounted inside the frame’s triangle, but that’s also the best place to put the modern lithium-iron-phosphate battery. Full-suspension mountain bikes do not have the large space in the triangle that a hardtail mountain bike would provide, so a quick and easy solution such a nylon triangle bag are out of the question.

In the next picture you can see how Nik managed to mount both the battery and motor into the triangle. Notice that the bike uses freewheel crank arms, so that the bike freewheels like a regular bike when the motor is not engaged: 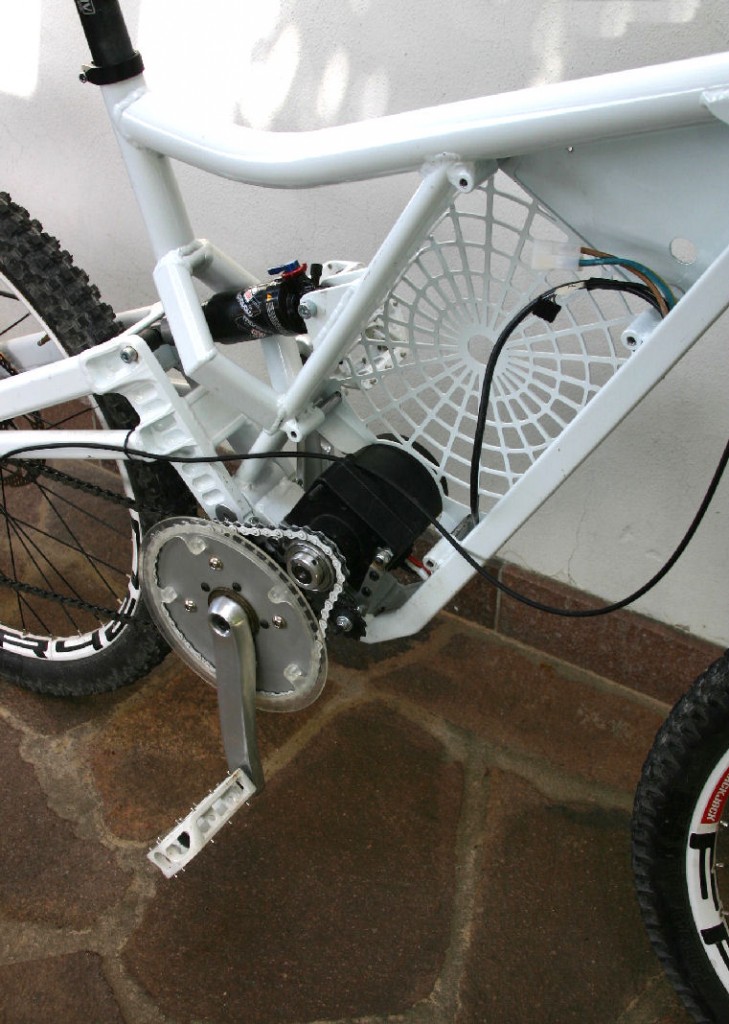 Part of the reason this E-bike came out so clean looking is Nik chose the very compact Cyclone kit as the motor and controller to base his E-bike. The Cyclone is an electric motor with a planetary gear box which ups the RPM’s the electric motor spins at, which makes it possible to link the motor with the slower-spinning drive train while still keeping the motor in an efficient RPM range.

To see other examples of elaborate home built electric bikes that use no kit (much more complicated builds) , check out  our articles on the Dogati and the Super Charged Big Hit.

In the next picture you can see  how the Spider E-bike’s components are laid out. The controller is up top above the battery. Because the controller is only running 36V at 15A it is fairly small and should be ultra reliable even when climbing. 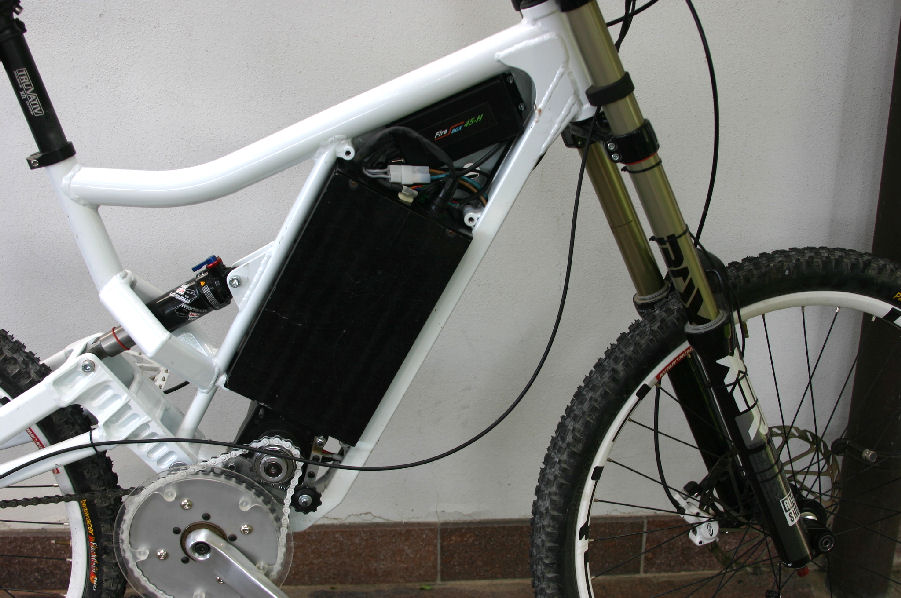 To finish off the look the battery box is cut in a web pattern. Not only does this provide the spider look, but also is functional in that it allows air cooling for the components: 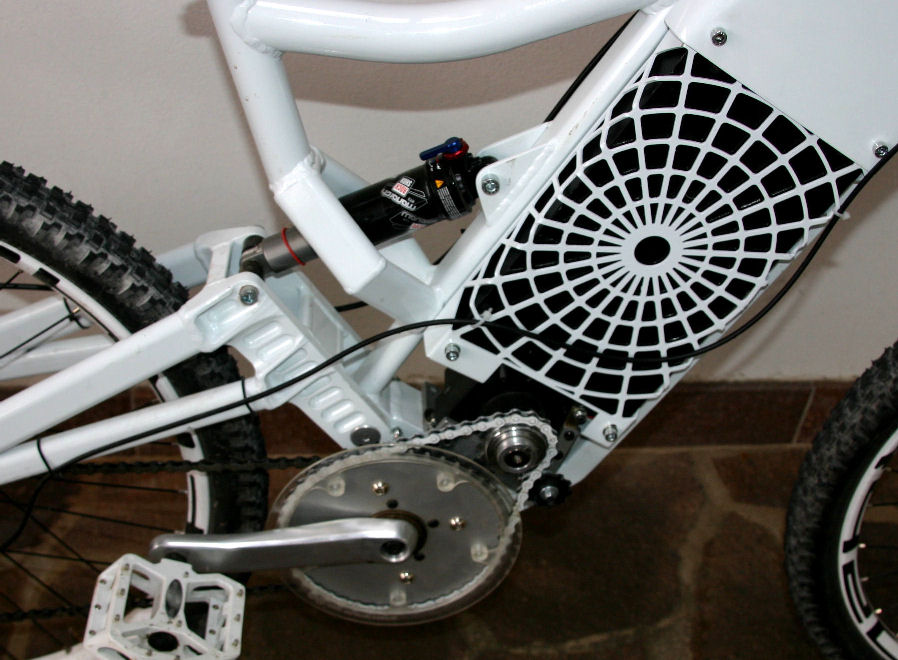 Could someone tell what kind of battery is on the