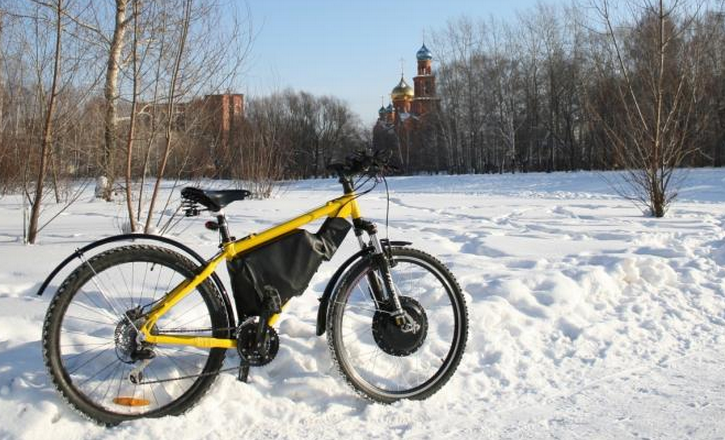 Electric Bikes in the Snow

In the interests of full disclosure, I grew up in Southern California, which is famous for it’s mild weather. I now live in Kansas (Central USA), where there are only several light snow days per winter. So the information here is advice from friends and also what I’ve read (I read a lot). So, that being said…here goes!

I’ve thought about collecting some helpful tips and writing an article on winter riding, and I recently found a Russian E-bike forum that was full of pictures from enthusiastic builders who are forced to ride in the snow often.

If you want to skip to the Too Long; Didn’t Read (TL;DR) version…here it is:

Use fat tires or stay home,

Fenders are your friend

A low seat puts both your feet flat on the ground, and finally

Extra water-proofing over the battery enclosure is required. (see pic above…pic courtesy of “snoag” from the Russian website electrotransport.ru)

Here’s a pic below of a fat-tire E-bike that has 2WD from a builder in Russia, a place that is famous for their long winters. In Teklektiks 2WD Mundo build, he told us that when you have 2WD, then each motor doesn’t have to be as big as compared to a single motor system, in order for the bike to have very good power capability.

He also mentioned that since geared hubs freewheel whenever they are not powered. this makes them perfect for 2WD E-bikes (because sometimes you only use one motor, or you are just pedaling). He also made sure to mention that…if both motors are identical, it will simplify any power-imbalance handling issues, compared to using a large motor paired with a smaller one. 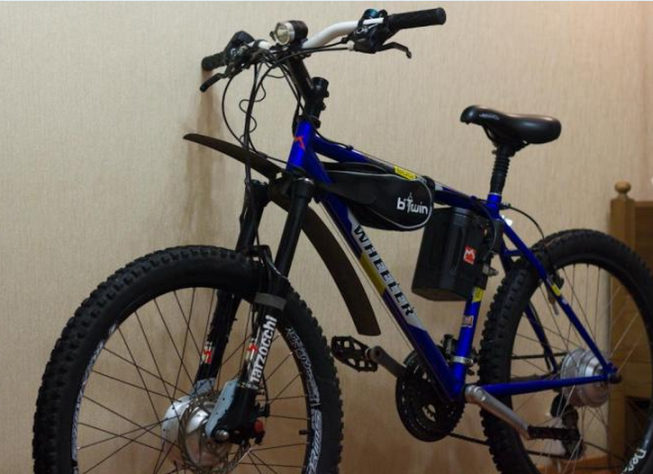 Below is a pic from Louis in Sweden. He has used many different types of gloves when riding in extra-cold weather. Thick gloves are warmer, but they make feeling the controls and buttons difficult. Thin gloves are cold, especially with the wind blowing on them. His clever solution was to cut off the insulated legs of some old snow-skiing pants and tie-wrap them to the handlebars, to cover over thin gloves. This idea works fantastic!

edit: thanks to ES member YoSamES for the link to “Snow Paws” and also “Bar Mitts” for Snow E-Bikers who would rather buy than DIY. 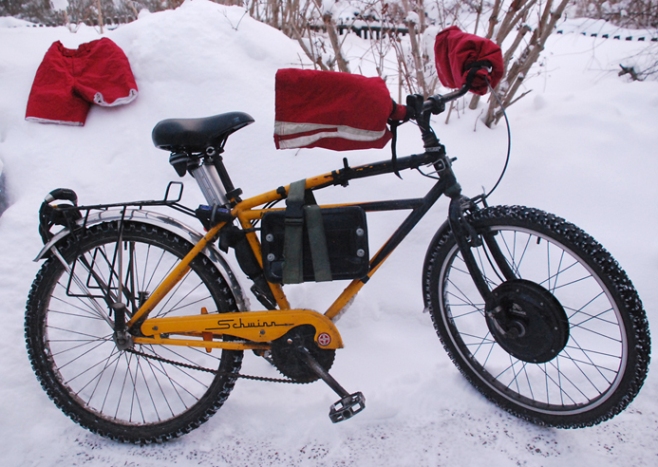 Here’s a similar suggestion from an “instructables.com” tip, where two one-gallon (3.7-liter) tea jugs are cut. and fitted over the handlebar grips. A screw through the outer end (the flat bottom of the jug) into the ends of the grips will hold the jugs in the proper place. You can buy professional ones that are ready to mount. called motocross “brush guards”. 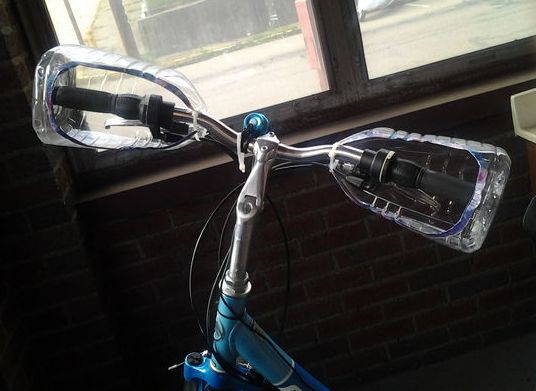 I don’t ride in the snow very often, but when I did, I immediately noticed how much worse my hands quickly got cold, compared to my bundled-up body.

There’s a couple of ideas to give tires better traction that keep popping up in forums. Here’s a pic of a cheap and fast method to add a little extra traction: 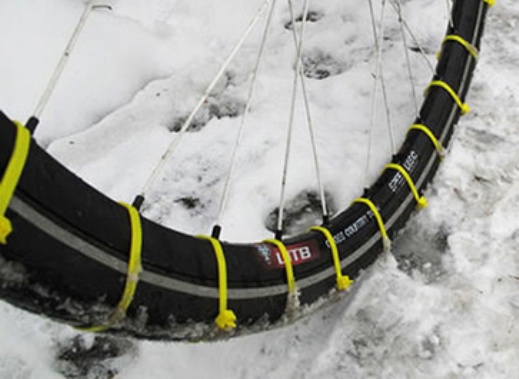 Cheap plastic “tie wraps”, sometimes called “zip ties” can add a little extra traction, and they are fast and easy to install.

Also, you can keep a set of fat tires with metal studs in them to help when you pass over a patch of hard ice. 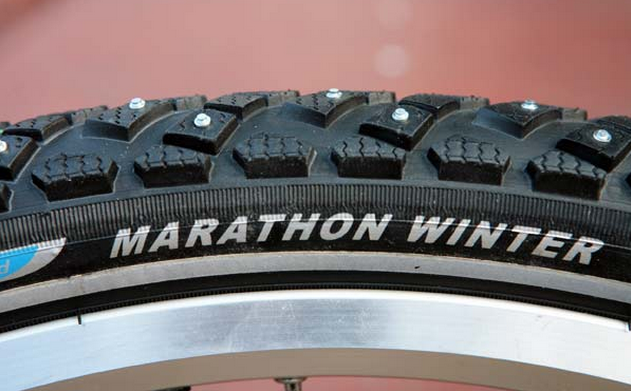 The Scwalbe Marathon Winter is probably the most well-known studded bicycle tire.

If you want more studs than this (or you just want to save a few bucks), consider experimenting with adding screws to an extra tire. ES builder DrkAngel posted this. Made sure to include the suggestion to add some construction-grade adhesive to the screw before screwing it in to the holes you have drilled. He lives in New York, where snow and ice on the roads are very common every winter. 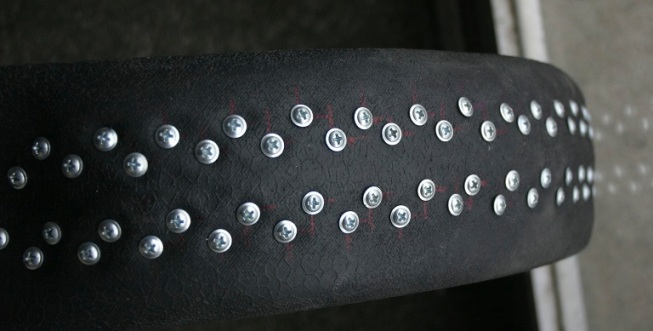 This is a view of the INSIDE of a knobby off-road tire.

The builder mentioned that they worked better after they were worn down a little, so longer screws are not always better. Try several sizes before buying a lot of screws. 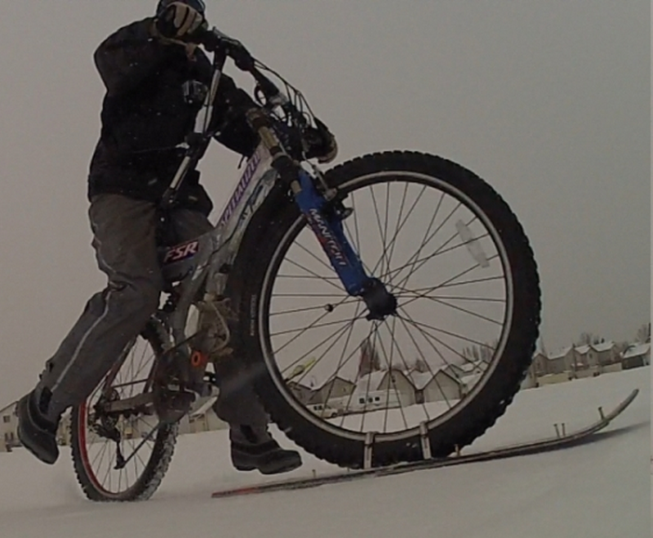 ES member myzter attached a used snowboard to the front wheel to keep his E-bike from sinking into the deep snow that he passed through on occasion.

Here’s an awesome video of an electric “ski bike” in action…https://www.youtube.com/watch?v=jtjCSqBFjSU

Send me your SNOW E-bike pics and tips, and I just might add them to this article. You must join endless-sphere.com, and then as a member, you can send me a “Private Message” (PM). My username is “spinningmagnets”

A rear hub is not ideal for snow, but sometimes…that’s all you have!

edit: Only one intrepid E-biker who lives in snow has responded so far. From new ES member “ripmobile” who lives in St Louis: “…I use motorcycle gloves…they work most of the trip, though I usually get a bit cold at the very end. My jacket is the famous [military surplus] Alpha N-3B flight parka…never found a better winter biking coat. The hood is awesome, and a stretchy face hood or balaclava keeps the head warm…”

In retrospect, I promoted FWD in this article, but I did not emphasize an important aspect of using a front hub: use TWO torque-arms on the front hub. Steel fork drop-outs (Cromoly is the most desired steel for fork drop-outs) are the best materials for a front hub, but regardless of material, use TWO torque arms. Its not like they wear out, you can own them forever. Steel drop-outs might spread-out and allow the axle to spin, but the worst thing to happen is to be traveling at a decent speed and have aluminum drop-outs experience a “catastrophic failure” (see pic below)…use two torque-arms on the front, period. 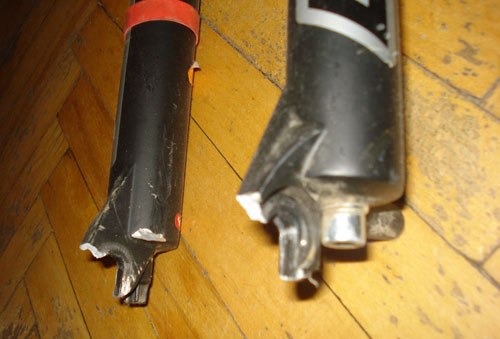 Steel will bend when it is over-stressed, but aluminum (which is common on suspension forks) will break, and snap clean off. USE TORQUE ARMS!! Your teeth will thank you when you DON’T smash your face into the ground.