The Evel company is based in Kyiv, Ukraine, in the eastern part of the EU. I recently saw a pic of their new fatbike, and I thought it looked better than a lot of the new fatbikes I had recently been seeing. But, whether you like this style or not, this shows that the Evel company is growing enough that they are investing in new designs, instead of just slapping their label on an existing generic China-bike.

A couple of years ago it seemed there were quite a few companies making an off-road frame that had a boxy center section to hold a large battery pack. Evel was one of these, and the reports I have read indicate that their version is as good as any of the others.

This frame uses a simple single-pivot rear suspension. That may not be as sophisticated as a multi-link, but doing this does keep the price more affordable. 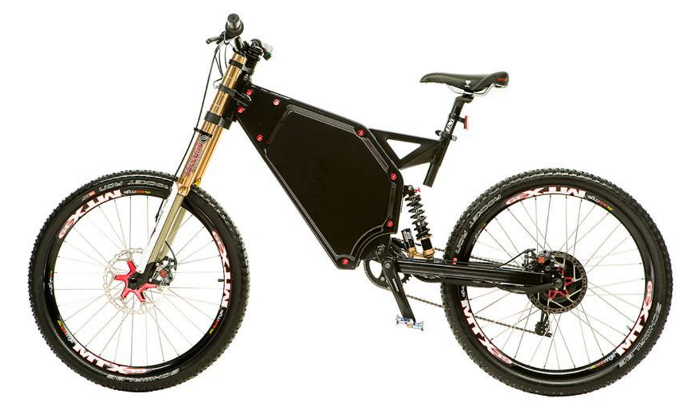 This particular fatbike style is very new, so I don’t know of anyone who has ridden one yet. However, performance-wise, it should be very predictably the same as other fatbikes that have a similar power system and rider posture. 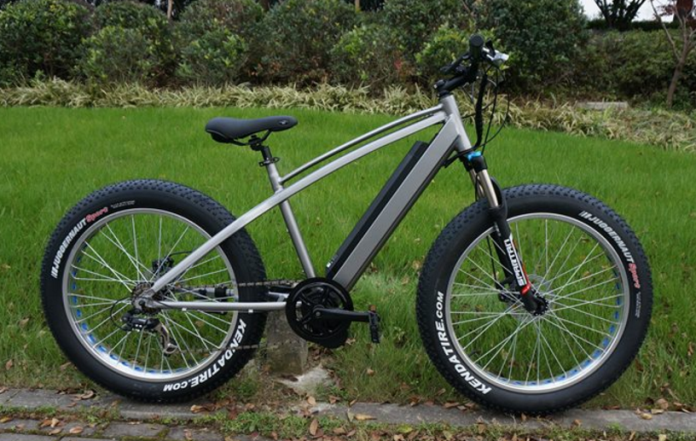 The Evel fatbike with a Bafang BBS02 mid drive

Having a light-colored frame with a dark downtube battery visually hides the battery pack very well from casual observers. This color-scheme of battery and frame, along with the small mid drive…it is almost invisible. 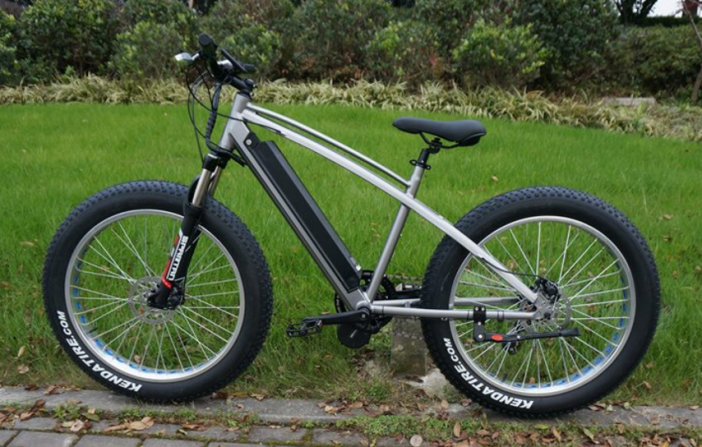 The Evel fatbike from the left side.

The battery and mid-drive motor are more visible from the left side. The shape and proportions of this frame are actually very elegant, and I don’t use that word to describe ebikes very often.

Using chrome rims combined with the blue tube-liners is a stylish touch that looks good and didn’t cost much. It’s a subtle styling choice, but I think it really adds to the bikes presentation. Don’t discount adding a little style to any bicycle, customers like it. 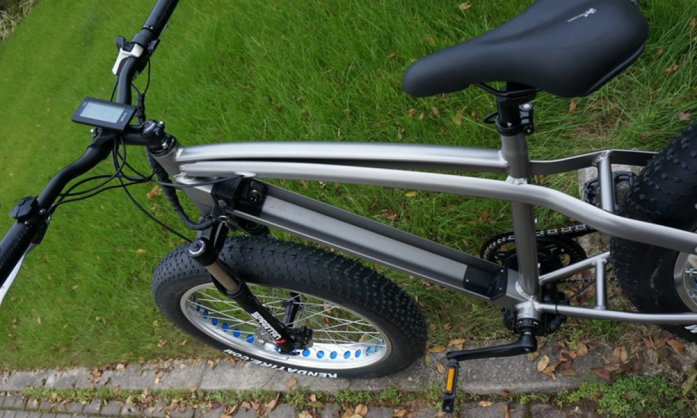 The triple top-bar, and the battery cradle.

This style of downtube battery is becoming more common. That may actually a be a good thing, because…if several companies begin using the same exact format and interface, then batteries from one supplier will “plug in” to the cradle from another brand of ebike. Companies don’t typically like to do that, but it would be very good for the customers to have options.

For instance, the possibility exists that this interface is the same as the batteries from the Smart Motion  ebikes. If that’s true, then the new 17.5-Ah pack from Smart Motion will plug into this Evel downtube cradle. Their stock size is a 48V / 14.5-Ah pack (which is adequate). However, the larger 17.5-Ah pack would be an exceptional upgrade.

The rear hubmotor in the pics below looks like it uses the common 205mm diameter laminations to form the motors’ stator. It remains to be seen how wide  the stator is, which would determine the motors’ copper mass. Knowing that will give us a good idea of the maximum amps that this motor can take. 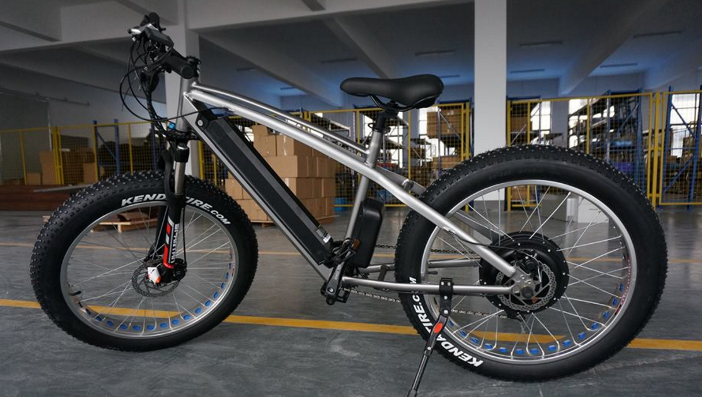 The Evel fatbike with a rear direct-drive hubmotor

With any kind of luck, this motor uses the Edge 1500W with thin laminations, and a 35mm wide stator. The pics look like it is only using a 6-speed freewheel on an axle with 170mm shoulders, so…this just might be a motor with some hot-rodding potential. If the stator was wider than 35mm, then this version would likely be using a single-speed freewheel, but…if it was the lower-powered 28mm wide stator, then…it would likely have a 7-speed freewheel.

The forks shown here look like they are one of the more affordable versions available. I don’t know if they would be up to adding much more stress than what they are currently under, but…if you want to turn this into a snow monster, you could add a geared hubmotor to the front to make it a 2WD [be aware, doing that would also require a second controller, plus upgrading to a high-amp battery pack, and using a 2WD throttle].

One of the things that drew me to this frame is the shape, but…I also liked the extra space between the seat-tube and the front of the rear tire. This indicates that this frame has a little “stretch” to it. A shorter frame might be a little more nimble on an off-road trail, but a slightly longer frame is more stable at higher speeds. I have a fatbike with a similar wheelbase that is stretched about the same amount, and I regularly ride the streets at 30-MPH. 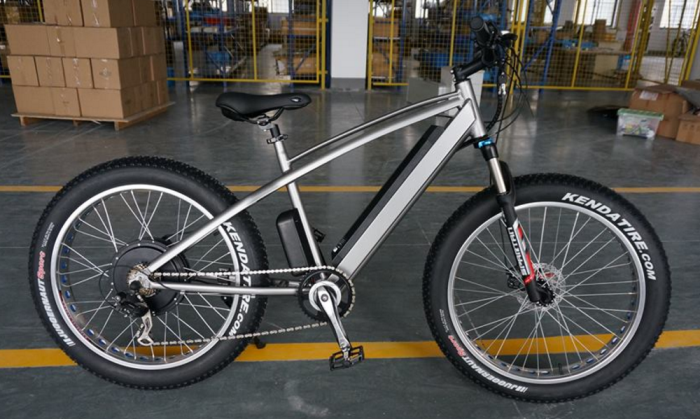 The Evel fatbike with a rear direct-drive hubmotor.

Just behind the seat-tube is where they located the controller, and they also did a very good job of hiding the wiring clutter. That may not seem like it is hugely important, but that is one of the details that customers seem to respond well to.

I do have one complaint (and bear in mind, I confess that I have never even touched one, much less taken a test ride). If you look at the pictures again?…I think the front brake disc is too small. I would guess it is about 160mm diameter. That might be adequate for the rear brake, especially because the hubmotor version will likely have regen-braking (using the motor as a magnetic brake when you are not applying any power).

On my personal fatbike, both the brake rotors are 180mm diameter, and I am about to upgrade the front brake rotor to 200mm, in order to give it just a little more stopping power. The original 180mm rotor on my front wheel is adequate for a pedal-only bike on flat land, but…I want more braking for a powered ebike that can do 30-MPH (48 km/h)…and also for going downhill.

Since its a hardtail, I’d also add a suspension seatpost…at least, as an option (I have one, do it…seriously). They might sit up slightly higher than a normal seat-post due to the springing mechanism, so you may have to trim the top of this seat-tube down a couple inches to be able to adjust the height properly, and low enough to be comfortable.

If you have ridden a fatbike and liked it, the new Evel fatbike should be familiar territory. If you rode a fatbike and hated it, I doubt there is anything new enough here to change your mind. However, if you like fatbikes, and you want something that looks better than the common diamond frame…this just might fit the bill.

No word on price or availability yet, but…

And if you speak Ukrainian, here is their home page

Hey Claus, do you, by any chance, know how we

I started working in our family bike shop when I