The Faraday Porteur electric bike is definitely what we would consider a “boutique” electric bike build. Not only is it a low-volume production, but also it’s something so attractive it invites you to climb on top of it. The Faradays appearance is extremely smart and clean, and was conceived with design first in mind by Ideo in Palo Alto. It’s a rare example of an electric bike that is mostly hand-made in the United States (by Rock Lobster Cycles in Santa Cruz). At $3500, the price is not bad considering that many brand name bikes on the market now are selling for $2500 plus–bikes which are of dubious quality and style, and imported and built entirely in China.

The Faraday is an electric bike you will not be embarrassed to be seen on. Its extremely stylish and stealth looking, and in fact it won the 2011 Oregon Manifest creative collaboration challenge. The Faraday has some unique features which we will go through now.

Battery Built Into the Frame 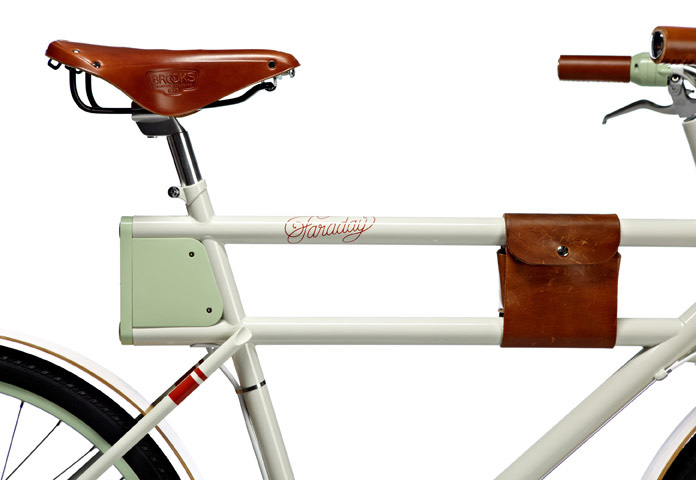 My favorite feature of this bike is that the battery is actually built into the tubing of the frame. This is done by running 18650 cells (cylindrical, 18mm diameter, 65mm long) mounted inside the two standard-looking horizontal top tubes of the steel-framed bike. I have never seen this solution before but it seems like a very elegant choice. The Faraday uses the highly regarded LiFePO4 cells from A123, a company which is headquartered in Massachusetts and is known for their cordless drill batteries. The 26V / 4.4-Ah pack in an 8S/4P configuration should last several years, and when the time arrives when it has reached the end of its useful life, a replacement pack is listed as $400.

The drawback is that not many batteries can be held in that small space, so this bike does not have the long range, which other comparable bikes like the Stromer or the Focus Jarifa would have. The Faraday has a relatively puny 110-att hour pack which will not give you very much battery assist for any serious length of time, and the Faraday video states the average commute it was designed for is 12-miles (see our article on watt hours and see how Faraday compares to other commercially available e-bikes). This follows the general motif of this bike which is form over function. But given that Faraday has already sold many bikes after just 7 days of its announcement on Kickstarter, it’s proof that a well-designed electric bike with only reasonable performance is what the public has been waiting for.

Most E-bike manufacturers would opt for an unsightly battery in the rear rack which can hold a lot more battery, but misses out on the stealth and beauty of hiding the batteries in the frame. Although, I suspect that when Faraday gets onto its feet, it will add an additional battery pack as an option. 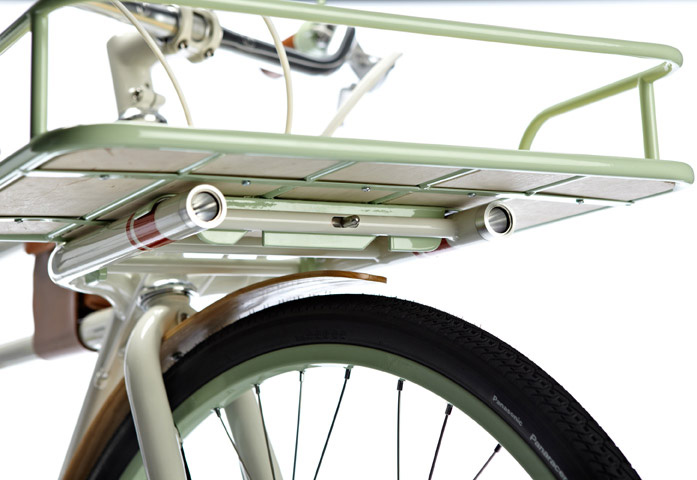 The beauty in this electric bike is the well thought out details. Not only are the lights wired to the main battery pack (a real nicety for an E-bike) but the LED lights are actually built into the frame, as well as their wiring. A photo-sensor automatically turns on the headlight and tail-light when it gets dark. It is details like this that make this bike really shine.

Speaking of details, the leather saddle options are from Brooks. The standard is the model B17, and the Collector’s Edition is a Brooks Swallow Ti. Also, the Faraday has beautiful fenders made of Bamboo or Ash. 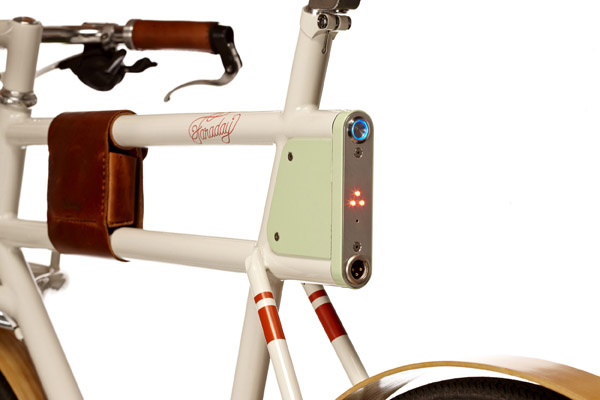 This bike has been designed from the ground up to be a purpose-built E-bike. The frame is made from TIG-welded Cromoly 4130 steel–in our opinion, the absolute best material for an E-bike frame. It is strong and it will last. No need to ever worry about your front forks breaking from the torque of the front moto, given they are made  from steel. Since a few extra pounds doesn’t matter much to most DIY electric bike makers, Steel has been the preferred material to e-bike fanatics.

The design does an excellent job of hiding all the wires, which are all contained within the frame. Notice that the controller (the green box) is built in between the two top tubes which contain the batteries. The controller box contains the rear LED tail-light for night-time riding, and also the e-bikes master  on/off switch, which can prevent battery drainage during long-term storage.

The only cable you will see is the brake lever cables going to the disk brakes, and the shifter cable going to the Shimano Alfine  internally geared hub (IGH, these are a good thing! no external derailleur). There is very little in the way of visual clues to give away that this bike is an electric bike at all. 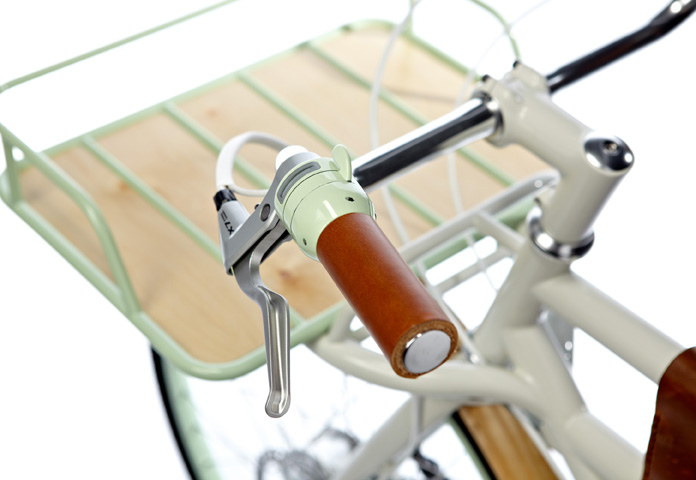 The Faraday does not use a conventional twist throttle, but rather relies on a pedal-assist system (sometimes called pedelec). This offers a carefree and easy to operate electric bike experience. If you want to go faster, just pedal harder. On the handlebars is a switch that you can activate for different levels of pedal-assist. A pedelec system also prevents an accidental acceleration when a child or a stranger grabs the handle-grip of a parked bike. 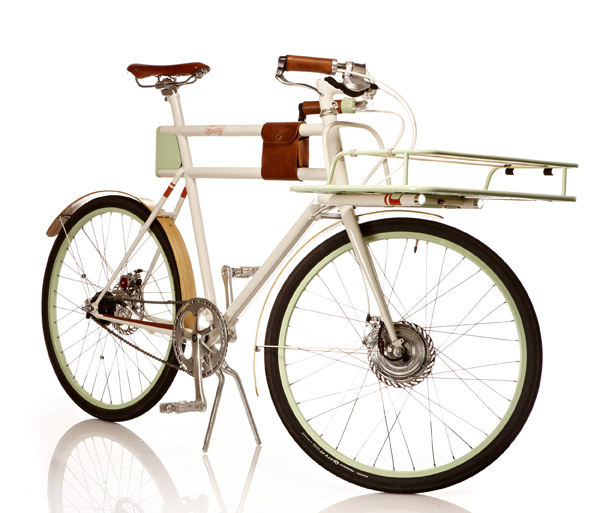 The Faraday electric bike uses a 250-watt geared hub motor built into the front wheel. This motor is made in China, but is a proven motor that has sold millions of copies and has been used through out Europe. Weighing in at only 5 pounds, this motor choice is what helps keep the Faraday’s weight down to a reasonably “liftable” 39 pounds. Because the motor has planetary gear reduction built in, it is more efficient than most motors.

However, this motor just gives a reasonable amount of “mild” assist. This bike will only get you to about 16 to 18-MPH without hard pedaling because of this puny motor. The electric-assist top-speed cap was likely chosen because of national moped licensing requirements in many jurisdictions if you are powering a bike to over 20-MPH (you can pedal as fast as you like, but the motor can’t assist if you’re over 20-MPH). Do not expect this bike to be a thrill ride, but it is fast enough to flatten mild hills and make your commute a relative breeze compared to riding a regular bike. 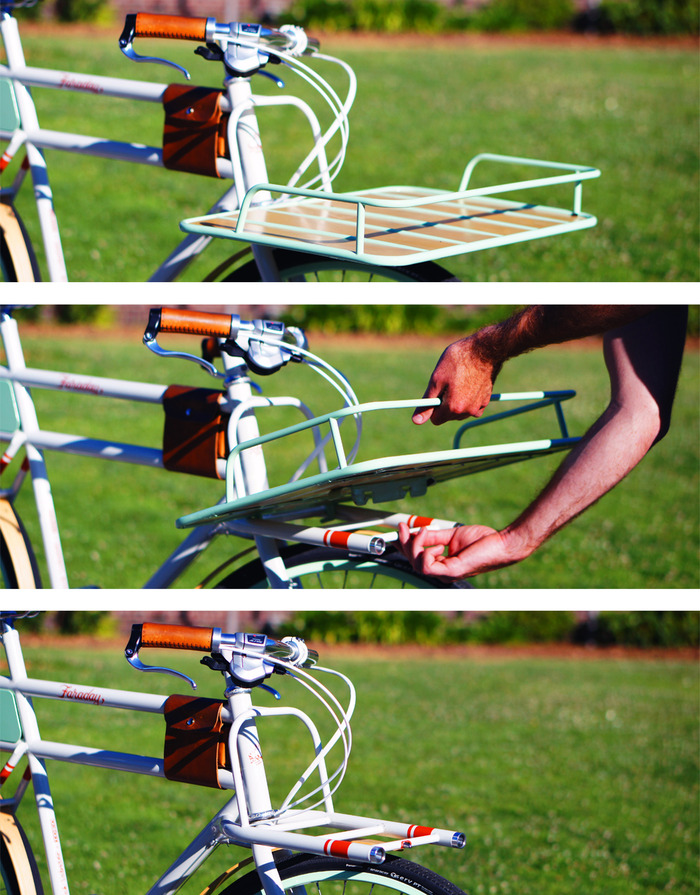 The Faraday sports a large front rack with stylish wood slats. The rack can be removed when its not needed to make the bike lighter and more maneuverable. The wood slats elegantly match the fenders. Details like these are what makes this bike stand out as a true beauty. 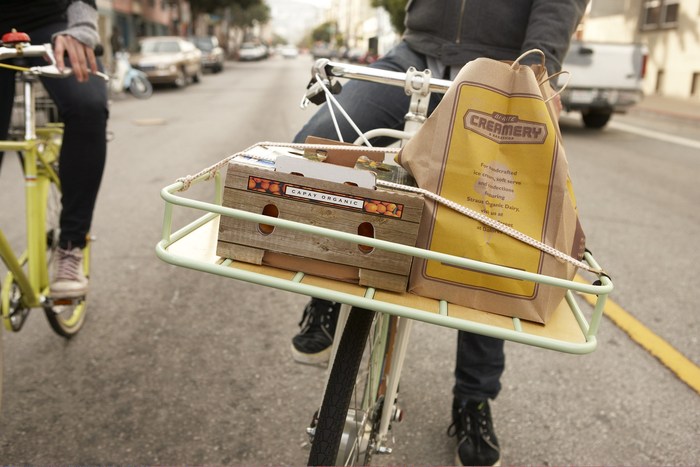 Because of its large front rack the Faraday would even fit our classification of a cargo electric bike.  The front rack is attached to the frame (much better than mounting to the forks, like many others do) which enables it to carry an impressive 30-lbs. Because the rack is mounted in front of you, the rider is able to keep an eye on whatever it is he is carrying. Front racks are awesome for carrying things like bags of groceries or cases of beer.

This is among the cleanest marketing presentations we have  ever seen for a new electric bike. Hats off to company founder Adam Vollmer for presenting his bike in such a professional manner and on a limited budget. The slick video below ranks right up there with mega companies like Audi and Specialized who this year also made announcements for new electric bikes:

Kickstarter and the Faraday

The Faraday has been remarkably successful in its Kickstarter release, raising $73,000 in less than a week. Most of this money was raised from people agreeing to pre-buy the $3,500 a bike at a $300 discount of its planned retail price. This is proving a great way to build, release, and sell a small production electric bike. The Faraday has 20 more days to reach $100,000 a goal it will almost certainly reach.  We wish the best for this awesome new company.

edit: Faraday has reached $177,000 as of February 2013. http://www.kickstarter.com/projects/faradaybikes/faraday-porteur