Large mainstream bicycle companies have actually begun to embrace electric bicycles this last year, judging from the new products presented at the large bicycle conventions, and also by the fact that bicycle magazines have actually been carrying articles on E-bikes with positive comments in them.

However, I occasionally scan electric bicycle stuff on Amazon, Ebay, and Aliexpress, just to see what kinds of changes are occurring in the industry. I do this because small retailers who get their stock direct from Chinese suppliers can respond to market changes much faster than a large corporation that needs to make longer-term and high-volume commitments to their dealers, a given product line, and their advertising theme.

It would be a waste of time to try and list every small retailer of E-bikes, because the list would not only be huge, it would change very often as more players join the game, and others go out of business. This alone is a good reason to find a larger retailer that looks like they will be around to help with customer service and legitimate warranty claims.

That being said, we are interested in everything about electric bicycles, and the smaller retailers of China-sourced E-bikes are a reality of life.

I recently stumbled across a new name (at least it’s new for me, since they may have actually been around for a while). Green Bike Effect (GBE) has a very professional looking website, and is based in San Francisco. They also have a Facebook page.

From what I can see of their product line, they have decided to stock a handful of generic selections from Chinese mass-production catalogs. However, the one bike that really drew my attention to them, is their “GTO Cruiser” model, which is very similar to the well-known and high-quality Electra Townie. Part of the reason I am so familiar with the Townie is that it has a large frame triangle, and that is a great place to locate the battery pack in order to help the overall balance of the bike. 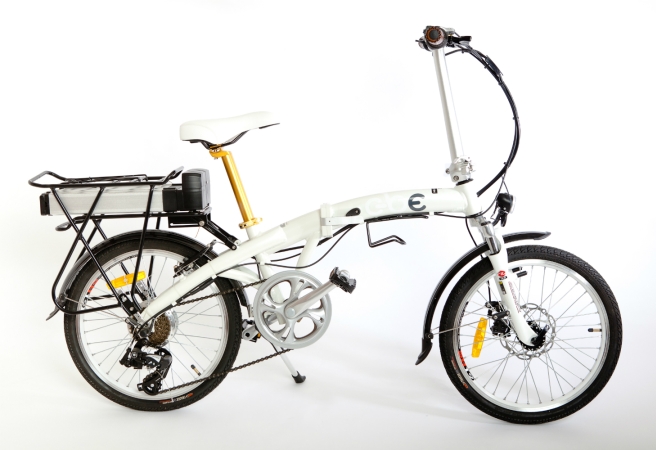 A generic folding bike from China with 20-inch wheels, marketed as GBE’s “M20”

The Stromer-ST1 uses a purpose-built frame with the stock battery pack in the downtube, and the flurry of advertising from Stromer this last year has given a lot of pedal-bicycle skeptics their first exposure to an E-bike that has an acceptable level of power with a fairly balanced ride. Read our review of the Stromer-ST1 here.

Last year, a new retailer could be excused for ordering E-bikes with a rear geared hub-motor along with a battery that is built into a rear cargo-rack. It was the easy solution. Pedego has enjoyed a lot of success with this simple formula, hopefully they will also see the light and upgrade the battery location options. However, this year, the boom in E-bikes means that customers, retailers, and manufacturers have all been exposed to enough selections that…a model that is tail-heavy will have a difficult time surviving.

The reason GBE’s GTO-Cruiser stands out for me is that; Electra has not yet made a commitment to producing an electric bicycle, and GBE is the only E-bike retailer I know of that is selling this shape of frame. Not only does moving the battery to the frame triangle make the overall package more balanced, but the unusually large triangle of this frame allows any buyer to install the biggest possible battery that they can afford.

The most frequent problem encountered by an enthusiast who wants to add an E-bike kit to their favorite frame is that; other than a rear cargo-rack mounted battery, there are few places to mount any kind of battery at all (especially on the desirable full-suspension frames).

GBE is in a good position right now, and I hope they take advantage of it. They need to produce a triangle battery pack that fits in the lower part of the GTO-Cruiser frame triangle. I’d recommend a pack made from the 18650-format cylindrical cells, and using the Samsung INR-20R cell (with at least 15-Ah of capacity). If somebody made such a pack for sale, I think it would do well. The EM3EV website is selling an 18-Ah pack made from the NCA chemistry, which has better performance…but it also costs more.

Just for a comparison, here is a DIY build by endless-sphere member nicobie, using an authentic Electra Townie  and high-quality components, and a very large battery pack inside the frame triangle.

Their Chinese supplier address is

US office is in San Francisco, and their website is hosted in Scranton, Pennsylvania.