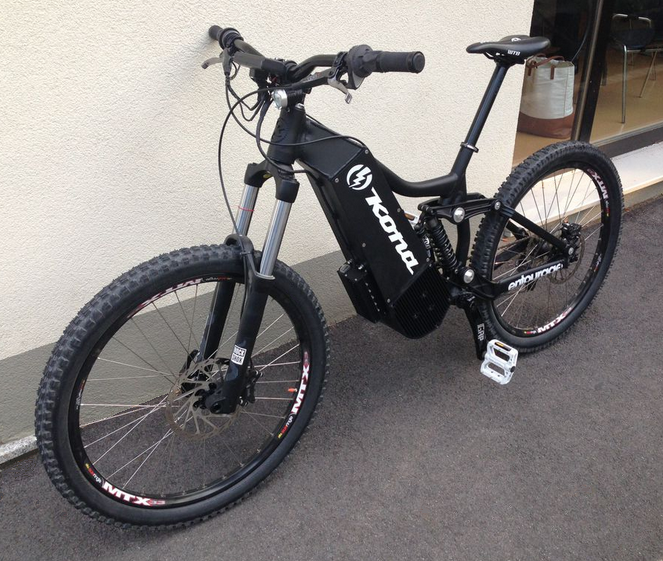 This mid-drive build features an innovative configuration that makes it easier for a builder to pedal along with the motor if you need to ride at speeds above 30-MPH (48-km/h). It was built by a man named Hannes in Austria (endless-sphere.com username: izeman), and the very professional look and performance of this E-bike is the result of a great deal of research and customization.

A mid drive that powers the bottom bracket’s crankset has proven to be a useful way to give an E-bike’s motor the use of the gears. The common and affordable hub motor kit is essentially a “one speed”, and although they remain an affordable and easy-to-install way to turn a bicycle into an electric…they are not well-suited to long and steep uphills.

If your local hills are relatively mild, a hubmotor may still be your best bet, but…if your hills are unusually long and steep, a hubmotor will not have any time to rest and then shed some of the heat that will be building up inside. There are several benefits to using a mid drive, but hilly off-road riding is the one area where mid-drives really shine, and are worth the extra effort and cost to install and have.

Back in November of 2012, another builder named Johannes in Germany (ES member: crossbreak), began posting a series of experiments to show that a MAC and a BPM geared hubmotor can be converted from a shell-drive to a shaft-drive. This involved un-pinning the stator from the (normally) stationary axle / shaft, and then connecting the stator core to the aluminum side-plate of the shell. This resulted in a motor of a size and shape that was not available in 2012.

The MAC and BPM motors have been well regarded for quite some time when used as a hubmotor. However, they have a poor heat-shedding path when used on extreme hills. This internal conversion also resulted in a dramatically improved heat-path from the aluminum stator core to the aluminum outer shell for soaking up temporary heat spikes that result from using high amps.

This geared hub-motor conversion was interesting enough by itself, but in the same discussion thread…Johannes also proposed a new chain-drive configuration that had some very specific and useful benefits. Rather than gear-down the motor RPMs to a very slow 80-RPM pedal-cadence…and then immediately gear the chain back up to roughly 300-RPMs at the rear wheel, he proposed to run a chain directly from the motor to the rear wheel (to watch a video of how the 7 gears operate, click here). The pedals would then drive a small second chain from the stock crank-set to a side-by-side freewheel and sprocket on the motor-shaft. 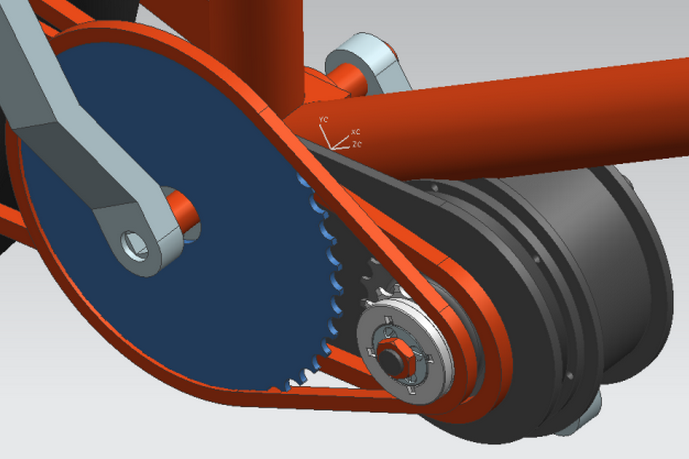 Although this may sound like it adds a lot of extra complexity in exchange for a small benefit, arranging the parts this way eliminates the need for a freewheeling crankset. It also allows the rider to pedal along with the motor at fairly high speeds while using a reasonably small and readily available chainring size (with most mid-drives, the rider cannot pedal along fast enough to contribute when the E-bike is above 30-MPH).

Although 60T chainrings do exist (to allow pedaling at higher speeds), they are so large that some frames will not fit one, and going to a very small 11T sprocket on the rear wheels’ gear-set causes a very high loading on each of the five fully-engaged teeth.

Hannes decided to build his E-bike with a converted MAC motor, and he would configure it as a “Crossbreak Style” drive. The MAC geared hub costs more than the BPM, but it also has about 25% more copper mass (and power potential)…and yet it still fits easily between the stock pedals.

Hannes knew ahead of time that he would be cutting his chosen frame and welding onto it, so that knowledge allowed him a lot of frame choices. The excellent Kona Entourage was not his first choice, but he found a big sale with last years model in the smaller size for a significant cost savings. The smaller frame was not an issue for him since he would be cutting and extending the frame anyways.

Here is the drawing that he settled on, as a guide. 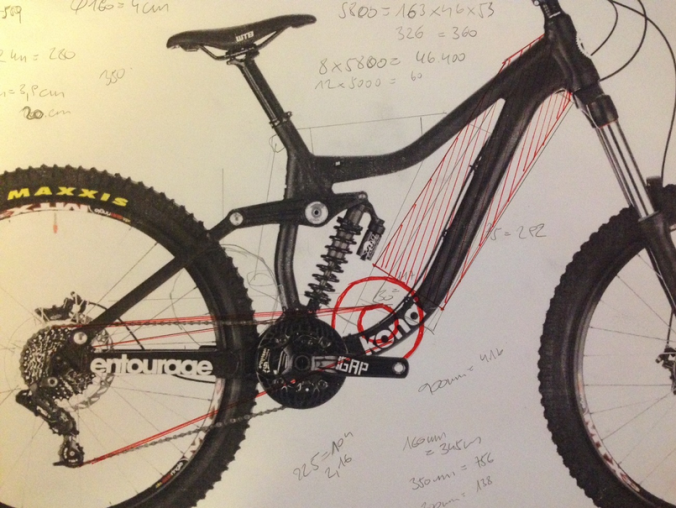 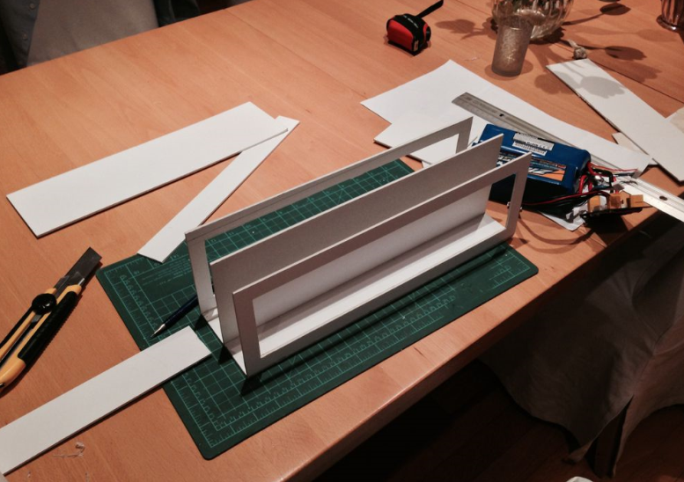 The battery housing is designed to hold eight of the Zippy 6S LiPo 5000-mAh bricks (four on each side). The pack is configured for 12 cells in series (12S), and if charged to a conservative 4.10V per cell, the pack will provide 49.2V when fully charged, which is fairly common. At 12S, eight of these will have 20-Ah of range. 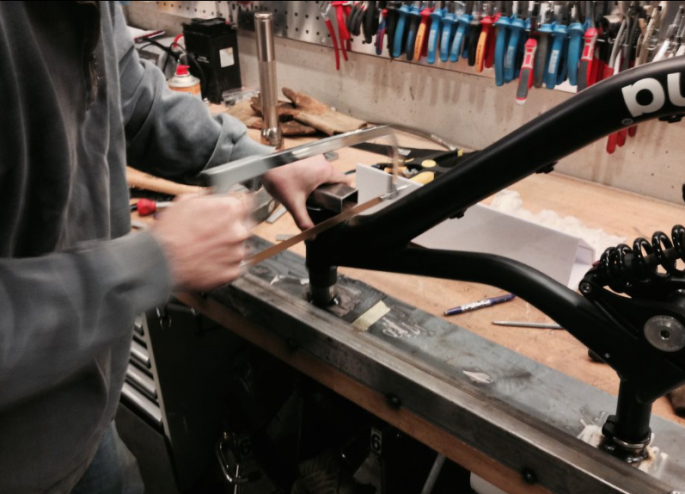 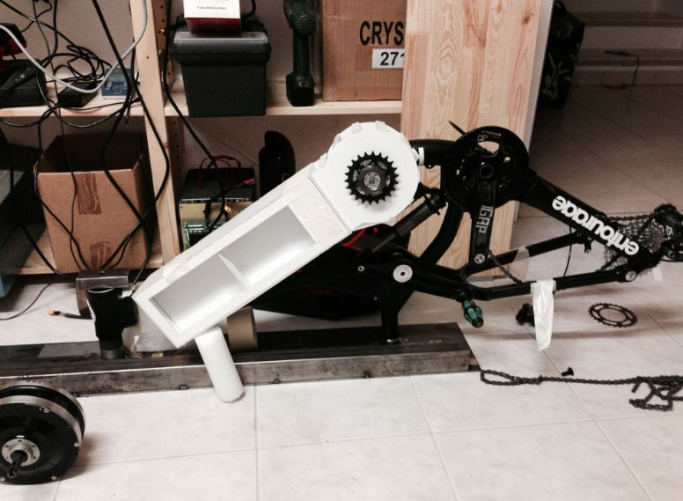 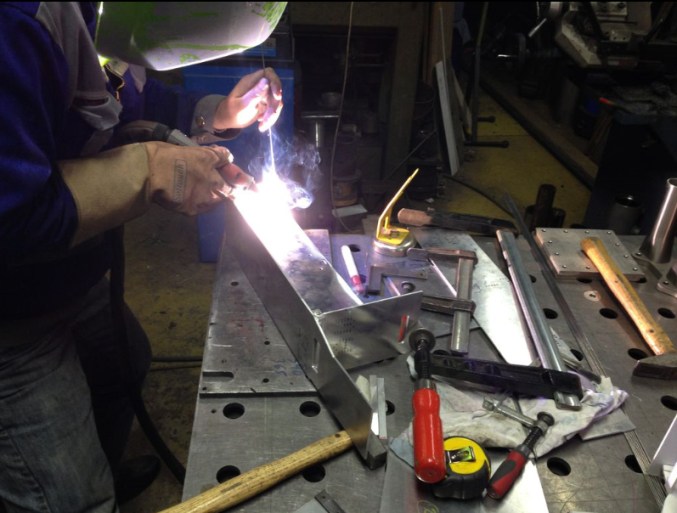 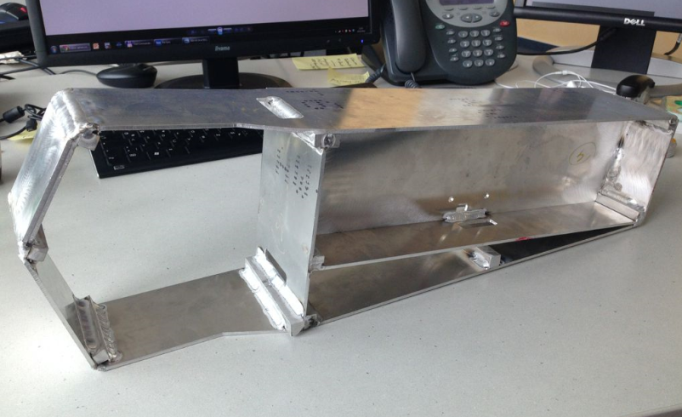 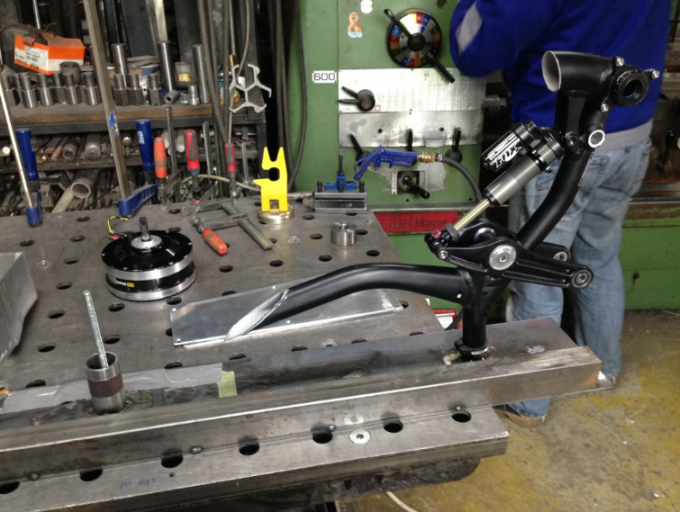 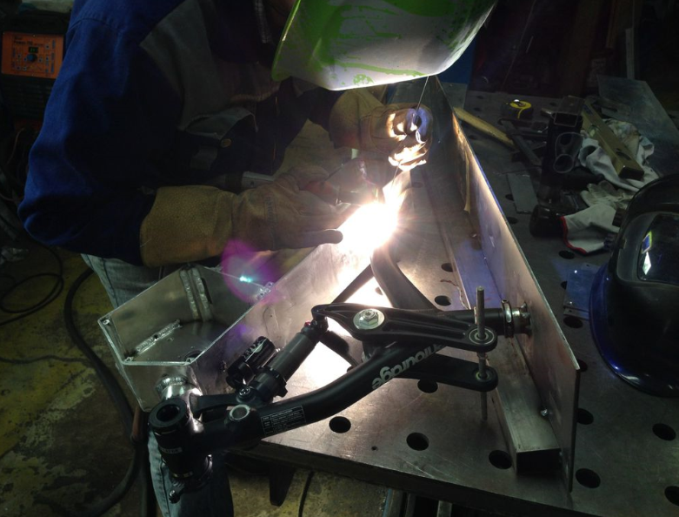 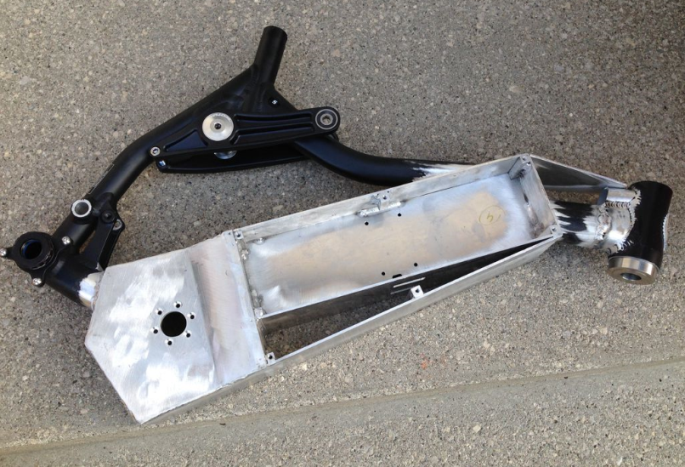 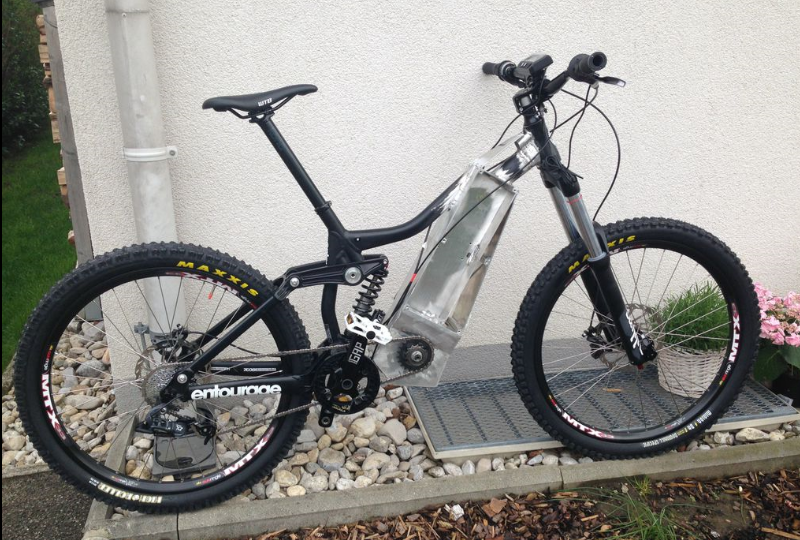 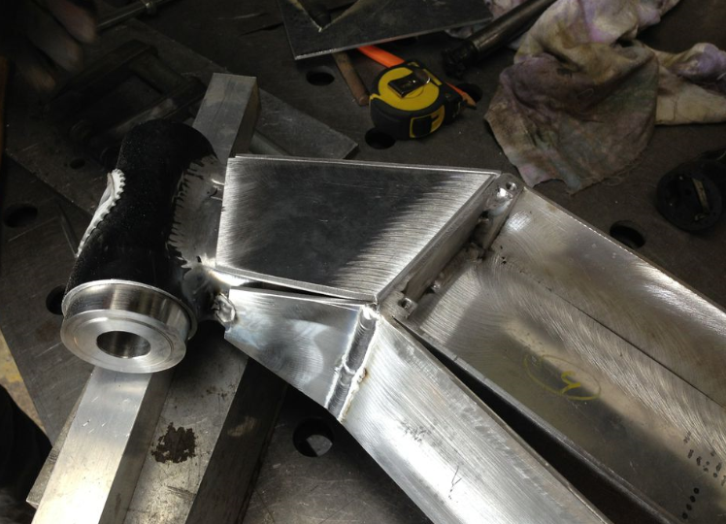 One of the two major benefits of the geared hub-motor internal conversion is that the heat-path from the stator now has a solid connection to the motors’ aluminum side-plate on the left. Even though the large housing and the frame were all now part of the motors’ massive aluminum “heat-sponge”, Hannes decided to add an even thicker aluminum plate onto the left side of the motor and mill grooves into its face to make fins. This was one of the visual elements that really makes this particular custom build stand out as exceptional.

The plate is a very fat 15mm thick, and the fins and spaces are both 4mm wide…and 10mm deep. 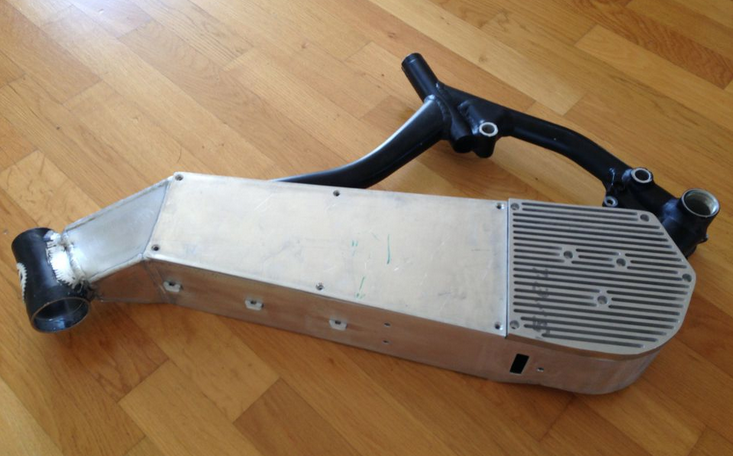 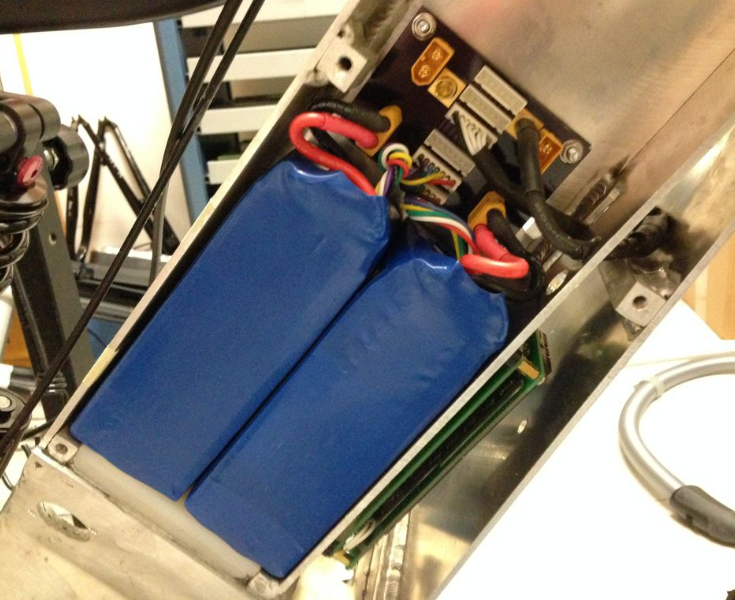 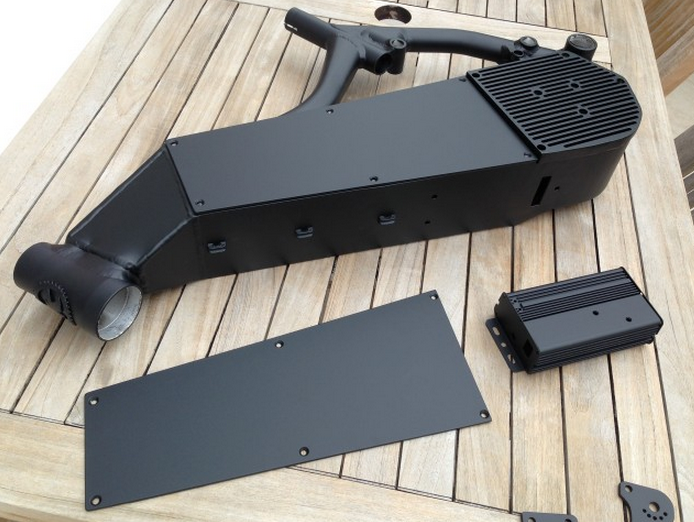 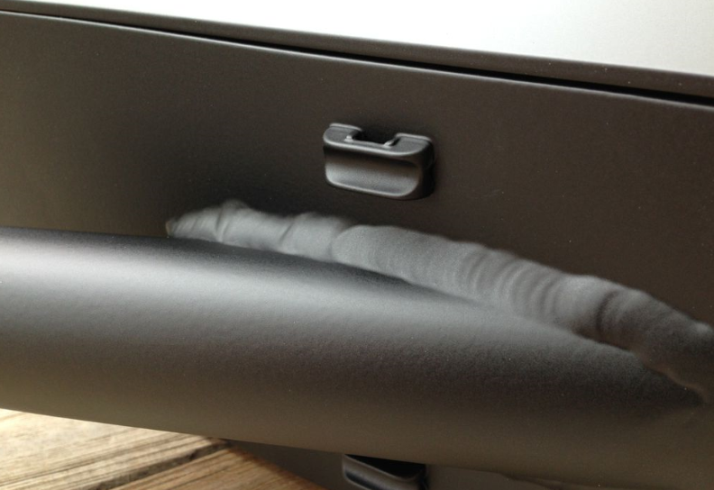 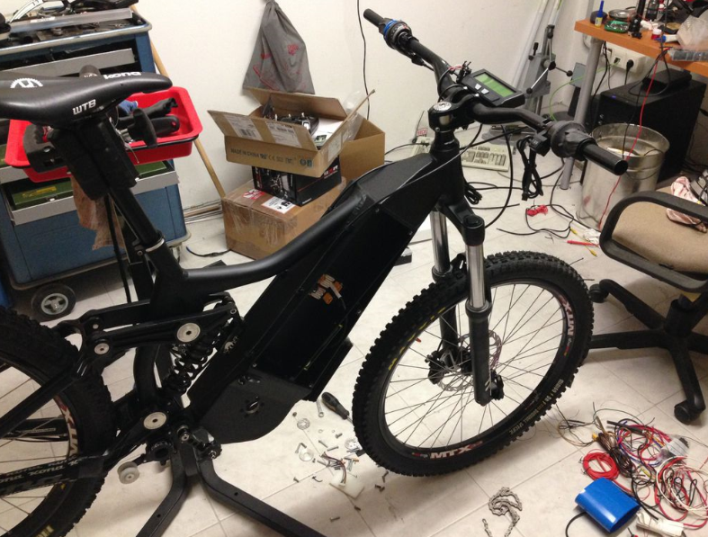 Just in front of the housing is where Hannes mounted a controller that looks like a well-known Xie-Chang 12-FET controller from Lyen. Its actually a 9-FET that has been slid inside the case to a 12-FET. This allowed him to hide the wiring, since he needed to mount the controller where it would get some air-flow, but this area gets enough dirt that he will be washing it off often. Notice there are no external wires hanging down! They pass directly into the battery housing. Using a 9-FET inside a 12-FET case also made room to insert a DC/DC converter to power the headlights he added.

His data-logging on the Cycle Analyst recorded occasional peaks of 44-amps on the hardest parts of the trails, but since he can select an appropriate gear for the motor to be in, the normal amp-draw is much lower while still providing exceptional performance. The controller uses efficient 3077 FETs, and is solidly attached to the aluminum housing to provide a massive heat-sink.

To test the systems capabilities, he set the battery amps limit to 90A, and the motor phase amps at a 190A with no heat issues, but data-logging has shown he accelerates too quickly for the system to reach this maximum setting. He reports it wheelies quite easily. However, this power level did fry one of the FETs in the controller, and…the MAC motors’ internal “ramped roller” freewheel occasionally jammed into the stuck position. Hannes slowly reduced the battery/phase amps down to 40A/70A, and the bike works quite well now at that setting (48V X 40A = 1920W). 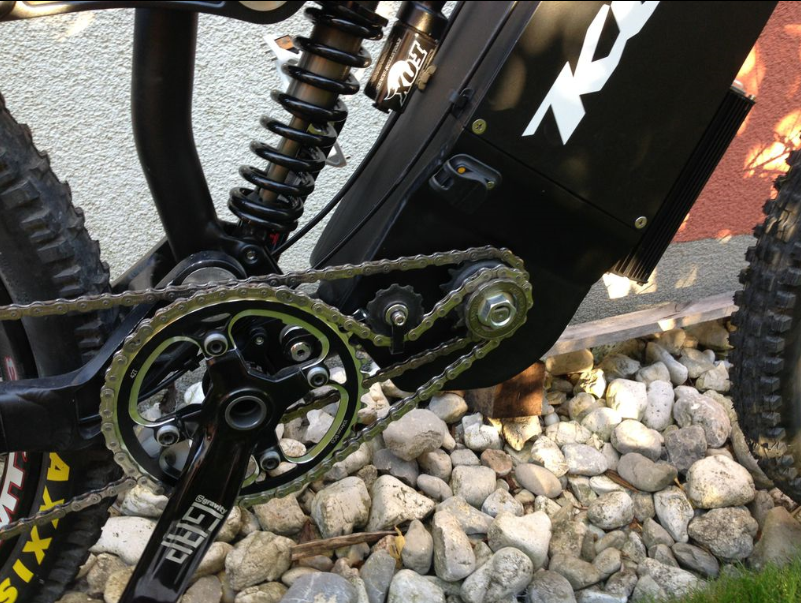 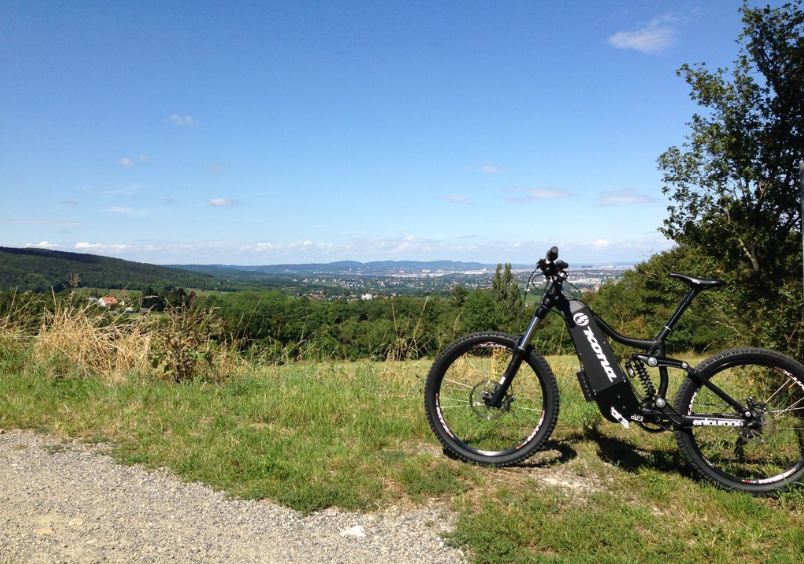 These pictures show a 42T chainring on the crankset, which provides the same pedal-cadence as a conventional drivetrain with a 61T chainring. That proved to be a much slower pedal-cadence than necessary,at his top-speed of 55-km/h (33-MPH) . So, Hannes switched-in a 36T (equal to a conventional 52T). Note that using these small-diameter chainrings also help the bikes’ ground clearance for riding over obstacles.

Having an efficiently designed drivetrain and 20-Ah of battery, Hannes is able to consistently ride hard through the hills for 30 kilometers (20-miles), which he reports is about one solid hour of riding. His range would be much better on a smooth street with him pedaling along to help the battery, but Hannes does not ride this on the streets, since Austria has a 500W power limit on E-bikes. unless, of course, you get an S-pedelec licence (S = Schnell, which is “fast” in German). In the USA, we would call this a moped license, and by a coincidence, the only S-pedelec we have written about so far is also in Austria…Martins Cromotor.

“This bike also has exceptional braking power. It uses Avid Core-R with 4 pistons and 200mm rotors, and this makes it easily controllable at high speed. The suspensions long travel together with the fat tires makes it a plush ride. As you can see, I love this bike!…

…The bike is a real eyecatcher. EVERY biker I met wanted to know how fast, how much, how heavy, what distance…and I only got very positive comments…”