This custom build is just a simple rear direct-drive hub at 72V, but what’s special about it is the frame the builder used. It is a heavy-duty steel pre-WWII frame, with a classic style that is very eye-catching. Many “vintage” items are fragile, but these sturdy bikes were designed to take a beating and keep on going.

Since he’s not using pedals, this is technically an electric scooter, but since it started out as a bicycle, I’m going to make an exception and allow it!

If you are ever vacationing in the breath-taking country of New Zealand (being “on holiday”, as they say there), you might consider renting a classic restored bicycle from Hellcat Cycles, at Lake Wanaka (on the southern island). Hellcat is based in Alexandra, and serves the entire Central Otago region 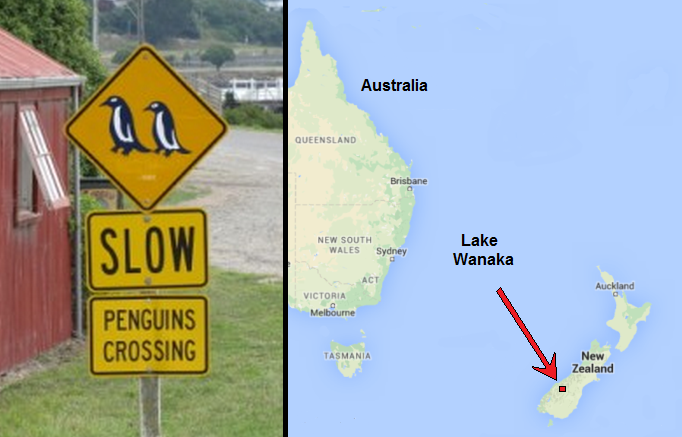 Since New Zealand is below the equator, their warm season is from December to March. Also, if you visit the south east coast, this is the nicest place to be able to see penguins in the wild. Antarctica and the southern tip of South America also have penguin colonies, but…they are difficult to visit. 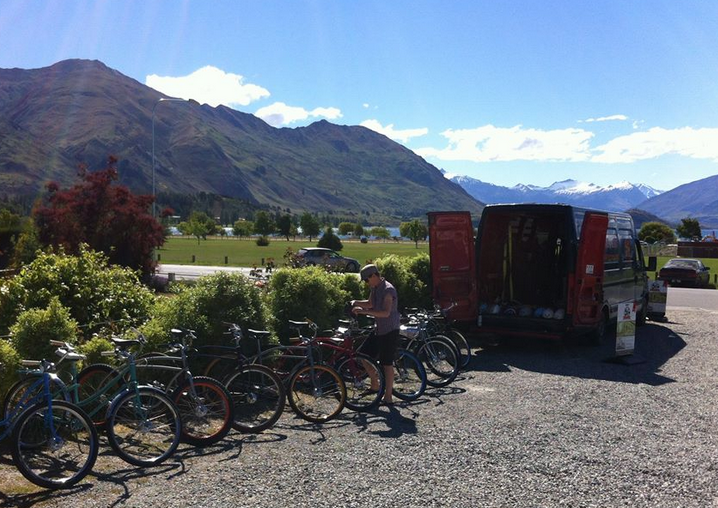 From Kevin, the owner of Hellcat Cycles: “…Hellcat Cycles began as me building cruisers as an alternative to expensive boutique bikes when I lived in in Portland, Oregon. I wanted to share the feeling I get when I ride a prewar bike with visitors to the region, which allowed me to transition the business into a rental company…” 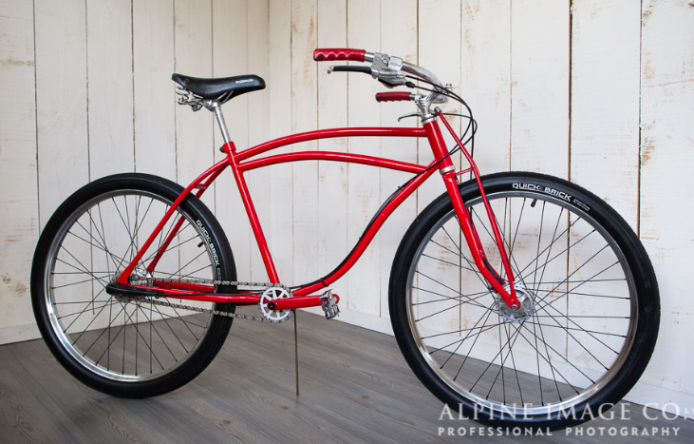 This restoration is typical of the bikes that are rented. The vertical rods that are added just in front of the stock fork are called “truss rods”, and they allowed a standard fork to handle heavier loads. 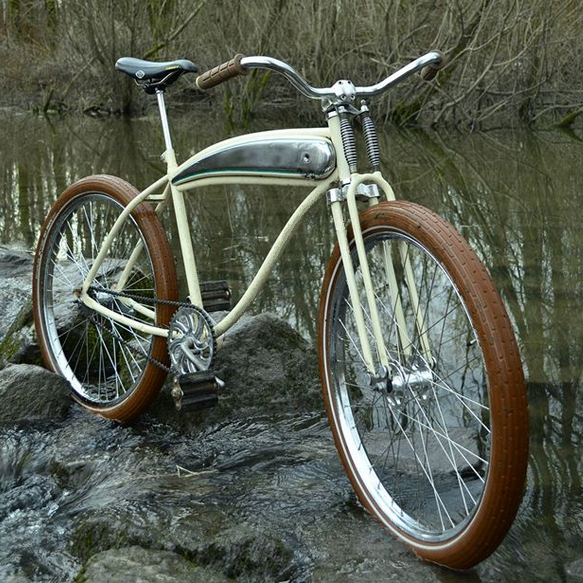 Here’s an early restoration project, which sold several years ago.

The pic above is another bike that has been restored “Hellcat style”. I love the polished “tank” and the Monarch dual springer suspension fork.

The owner of Hellcat Cycles lives is Alexandra, and wanted a way to get to work on one of his bikes. He had read about adding an electric kit to make it an E-bike.

Once he had read about the components that were available, he decided he needed the performance of using 72V on a large Crystalyte 5305 hubmotor. The electric part of the build is simple and straightforward, so it would be reliable and easy to maintain. The fact that direct-drive hubs are very quiet when paired with a sine-wave controller was an added bonus. 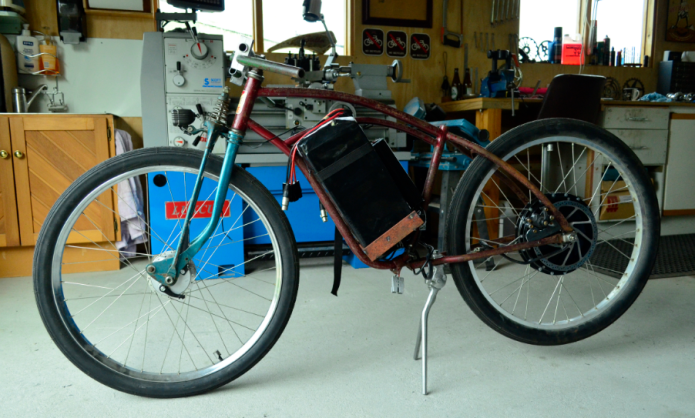 Converting a steel pre-war frame into a moped.

He sorted through is parts-bin, and selected a strong frame with a large triangle space, and then added a classic “beehive” springer fork. 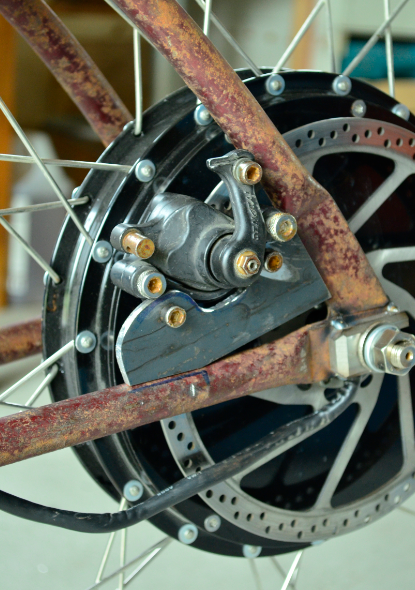 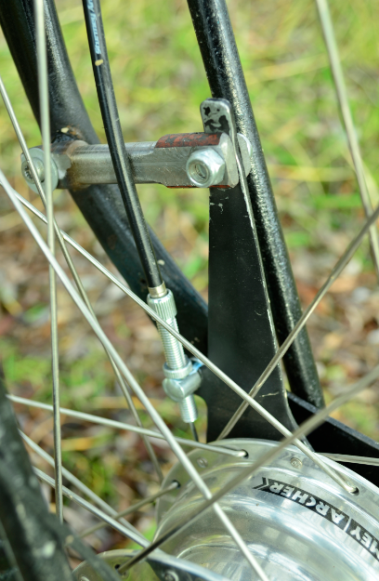 In order to keep as much of the classic look as possible, he custom-modified the fork to hold a Sturmey-Archer 90mm diameter drum brake. Although these are not very common, they work quite well, and are a favorite for heavy-duty pedi-cabs around the world.

One of the things I liked most when I first saw this bike was that he had left the “patina” on many of the parts, rather than sand-blast them to the bare metal and re-paint it to look like new. He also decided to build it up in the boardtracker style. 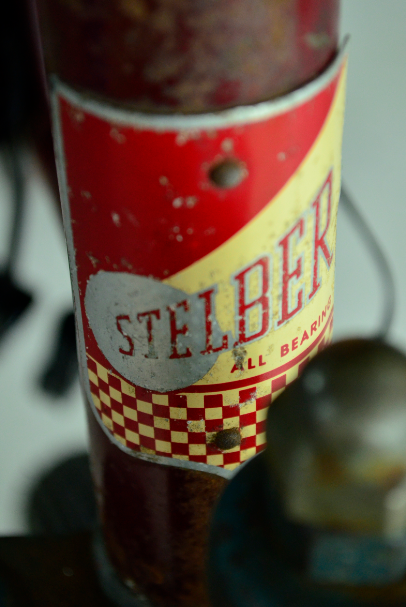 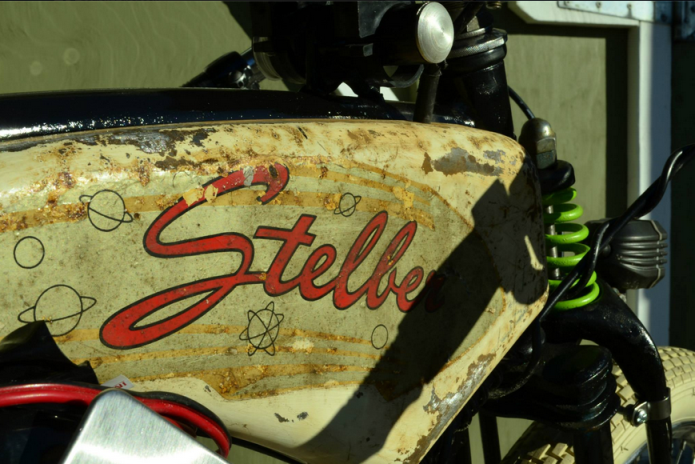 The tank graphics will be kept in the state they were found.

The Stelber bicycle company didn’t make many bikes, so this find is rare. The graphics theme has to do with space exploration, and before WWII, the movies depicting the comic book heroes Flash Gordon, and also Buck Rodgers were very popular with young men. 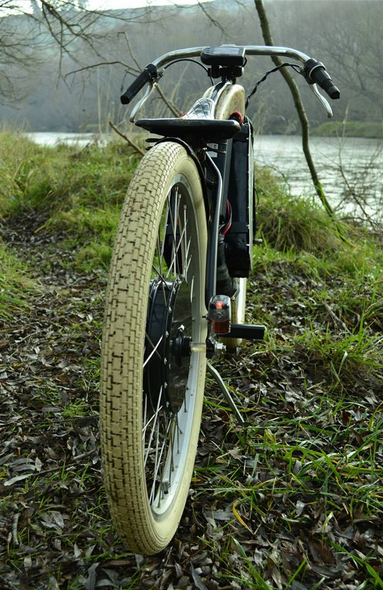 To make a boardtracker, you take common “moustache” handlebars, flip them over, and rotate them down. This makes it easier to crouch down into an aerodynamic tuck position when racing.

Classic style pre-war bicycle tires can be found by Duro, Felt, and Schwalbe. 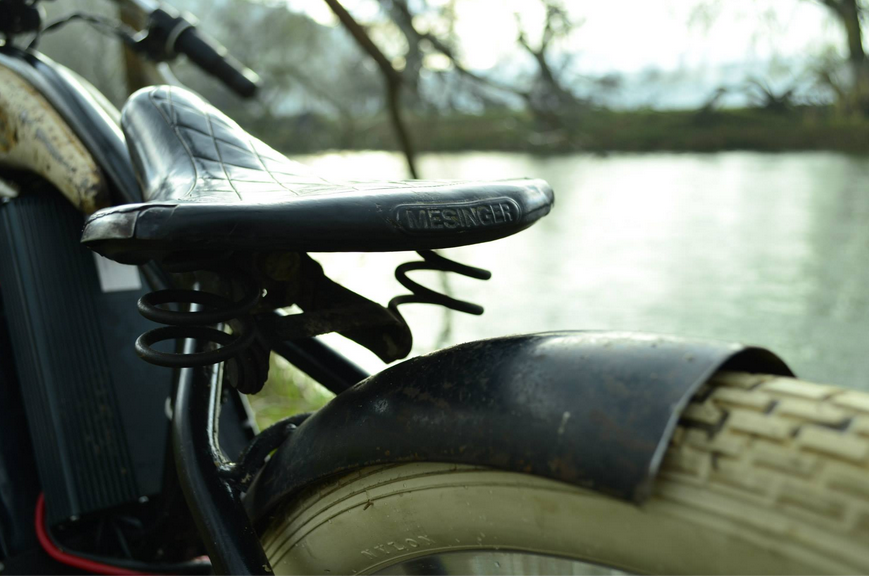 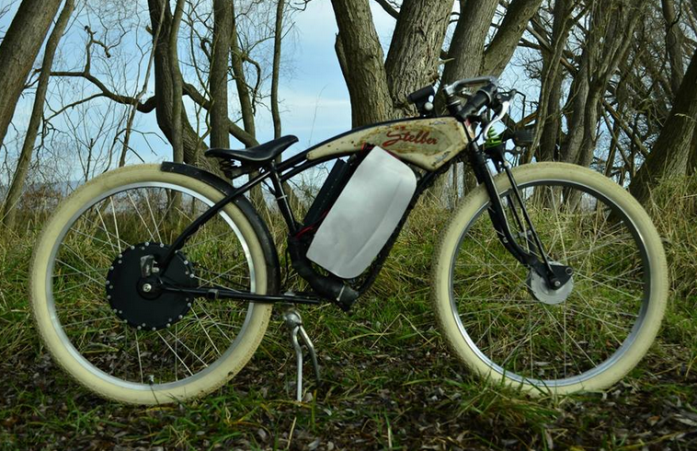 A fun E-bike can also be stylish, while it’s getting you to work.

“…Fifty…Five-O. Not a reference to the fuzz, but to the speed I desired to achieve with my first ebike build. Fast enough to cruise comfortably at highway speed but not so quick as to have paint strip away as you accelerate into a sunset of unreliability. I wanted a classic board track racer with upside down mustache bar, springer fork, rigid rear end, and the low-slung lines of a machine that looks blisteringly fast while stationary. I’d like to introduce Sparky.

Sparky is a 1930s Stelber cantilever tank frame and I chose this particular frame for two primary reasons. Firstly, the bottom bracket shell is a two-piece design held together with pinch bolts. Having never seen anything like it before, I decided it didn’t seem like a reliable enough setup to be built into a pedal bike, and…since I had no plans of running cranks or pedals, it seemed like a logical decision. The second reason had to do with the seatpost and frame interface. This seatpost was originally designed to be secured via a bolt under the saddle and connected to a wedge inside the seat tube, like a quill stem. It’s a clean look but not ideal if the seat height needs to be adjusted.

The first task was to machine thicker dropouts and mount the rear wheel. The stock dropouts on a pre-war frame are around 3mm thick, which may as well be a two dimensional line. I used 10mm thick steel for new ones, which provides enough support for the axle without needing unsightly torque arms. Along with mounting the rear wheel, came yje task of having to spread the rear end to accommodate the 135mm hub spacing. Spreading the dropouts by 35mm on an 80-year-old frame was almost more than I felt comfortable with, but with deft use of a Park frame alignment tool all went according to plan and the monster Crystalyte 5305 hub motor slotted snugly into its new home.

Rear wheel on, I moved to the front-end and picking a fork. I have a few springer forks lying around, but…not all are created equal. The Beehive springer forks on 1950s ladies’ J.C. Higgins bikes for example never came with a critical link between the top of the spring mount and the top of the fork steerer tube (oddly, the men’s model of the same bike does have this rocker link). Using one of these forks with a drum brake will lead to catastrophic failure, and severe harm to the rider. So, I settled on one from a ‘40s Rolfast.

I liked the funky rocker links and the stock headlight mount but after a bit of time riding it, I concluded it felt under-gunned for the bike’s capability, and the added complexity of using a floating drum brake mount made for an absolute nightmare when the front wheel needed to come off. A dual crown springer off an early ‘50s Western Flyer operating via a pull spring was swapped in its place. Its simple design and slotted vertical dropouts make for quick and easy front wheel removal without any floating drum brake nonsense and it feels much stiffer through the bends and under braking.

I was going to be using a Sturmey Archer generator drum brake hub on the front, so I opted for the largest one they make (which is fitted with a 90mm drum instead of 70mm). Slowing the rear down is accomplished by a cheap, mechanical 200mm disc but it’s still powerful enough to lock the rear wheel. Because I was using cable operated brakes, I chose the slim and sexy Tektro levers that are as minimalistic as it gets. 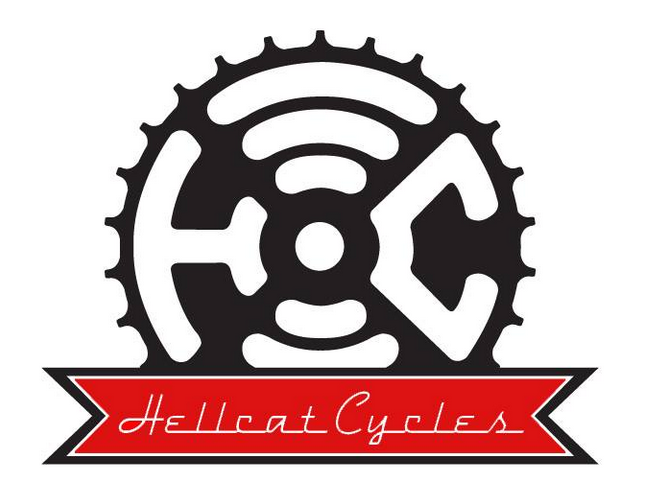 The Dosun front and rear lights powered by the dynamo hub are beyond bright; imagine having a miniature sun mounted to the front of your bike. The added bonus of running off a separate circuit to the batteries means that all the batteries’ power can go to the rear wheel. A clever feature is that the front light houses a capacitor storing power for both, so at a standstill the lights stay lit for a good few minutes, unlike the generator lights of old which left you blind in the dark when you stopped for a minute.

Other touches include cream Duro tires to match the faded beige paint on the tank and a sprung Mesinger saddle that looks like the inside of a smoking jacket. It’s attached to the bike by a pre-war ‘Lucky 7’ seatpost, tack welded in place of course due to the lack of a seatpost clamp. A bobbed rear fender keeps dust off the wires and connections behind the seat tube but does little to keep the rider dry. Once the batteries were hooked up and the controller mounted, I spent time tidying up the routing of wires and stuffed as much as possible inside the faux tank. I’m not the sort of person who can stay happy with a build if it’s held together with duct tape and zip ties.

72 volts of Sony 18650 Lithium cells at 40 amps provides the 2880 watts necessary to take Sparky and rider up to the magic 50mph (80kph) with little effort. Under ideal conditions, speeds of 54mph (86kph) are achieved. Although power can be turned up to a max of 4200 watts (84 volts@50a) the range drops considerably with little effect to the top speed due to aerodynamic drag. I see a fairing in my future and am ambitiously hoping to regularly reach speeds closer to 56mph (90kph). Range is over 20 miles/30 kilometers per charge, which I’m happy with considering I’m often going flat out between home and town—around 7 miles return and fairly flat—and as I’m sure you can imagine, there’s only so far one can comfortably ride a rigid bike at high speed.

Overall, I’m pleased with how the build came out and the usability of the bike. The riding position is relatively neutral and the transition from upright to a full tuck is a simple matter of sliding your butt off the back of the seat until it touches the fender spike. The front drum brake is surprisingly powerful, although as drum brakes do, it becomes ‘sticky’ when overused on its own to slow down from speed.

Alternative vehicles like Sparky are the future transportation solution for a lot of us and every cop that pulls me over for a photo and a quick chat shares that exact sentiment. Alas, it’s still very new technology in certain parts of the world, and garage builds like Sparky will continue to exist in some blurred gray area of legality until legislation is passed to allow them on the road in some capacity. That said, Sparky is used often and I always come home wearing a massive grin. The novelty of silent speed, the cool factor of riding a genuine vintage machine and the cheap running cost are a few of the upsides. Mostly though, it’s a hell of a fun way to get the shopping home…”

You can find out more information about rentals from Hellcat Cycles on their home web-page, and also at their Facebook Page.

When I started writing for electricbike.com, one of the