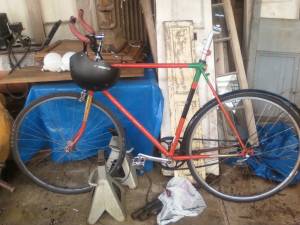 I am selling my Vista Carrera 7 road bike. Perfect for the aspiring culture creator. I have recently become a Successful Entrepreneur and I no longer have the need for such trifling possessions. I drive a gigantic cargo van that literally pisses gas onto the road to mark its territory.

Do you want to be noticed? Do you want to stand out from the crowd? Sleeve tattoo didn’t do the trick? Dubstep bounce remix didn’t go viral? Look no further than this bike! Don’t even look past it in the pictures posted below. Import it into Photoshop and delete the background. I know you know how to do it, because you’re a graphic designer.

Orange body. Green accents. Pink handlebar wrap. Some silver. Black. Dirt. Are there even any more colors? There are awesome reflective stickers on the bike, too, which makes darting out in front of automobiles on dark evenings and asserting one’s absolute and total right-of-way even more self-righteously awesome. Dear motorist: Did you not see the stickers? Do you think I have time to just put stickers on things? I’m trying to save the world from people like you.

Just think of all the great places you could see and be seen on this bike:

The possibilities are endless.

This bike will get you laid. If you ride this bike around Audobon Park at 1 in the morning without pants on, dudes will literally knock you off of your bike to try to blow you.

This bike is a freewheel fixed gear, because you’re a fucking monster and you only need one speed, and that speed is +/- 15mph.

A seat comes with the bike, but is not pictured. If you want, you can ride the bike without the seat to simulate the stick you have up your ass about which Pavement album is best, which political cause that matters to you most intermittently, or about whatever it is that you “do.”

This bike is Japanese and comes with four distinct safety features:

Safety Feature #1: front brakes only. Because you’re not about to conform to anyone’s preconceived notions of how a bike should stop.

Safety Feature #2: Quick release back wheel. I took this bike to Mike the Bike Guy on Magazine to get a tune up once, and he refused to work on it because of this Safety Feature. He said it was a “Frankenstein bike.” I asked him if he didn’t agree that Frankenstein was a literary masterpiece. I thought that after losing that argument he might be a gentleman and agree to tune up the bike for free, but he remained all pissy and still refused to work on it, even for money.

The next time I went in to Mike the Bike Guy on Magazine was to get air. I was all, hey MTBG, can I get some air? He was all yes. It was clear that we both believed that air is a free resource that should not be commodified. Common ground. He pointed me toward his air machine. Everything seemed cool. When I realized that the nozzle didn’t fit my bike’s tires, I was all, hey MTBG, how does this nozzle go on? He looked at me, turned around, took two steps toward the back of the room, and let out a loud SIGH. I couldn’t blame him. I work with people too, and sometimes they ask me questions because they don’t know things and I am the paid expert on the exact things they don’t know and I am standing right next to them, and I have to humiliate them in front of others before I answer them, too. It’s all just part of the job.

Safety Feature #3: Helmet. That’s my helmet. You can ride in a painter’s cap and pretend to be smart at the same time, but you’re not fooling anyone.

Safety Feature #4: Welding fix at seat joint. When this joint came loose, the bike was deemed horribly unsafe. When I welded it back together, it became safe again, therefore: safety feature. It’s supersturdy now; I welded it to fuck and back. I painted the welding joint green because I was feeling creative and I don’t have to explain my art to anyone.

Safety Feature #5: Apparently this bike has really nice rims. I am listing this under Safety Features because I feel that less-nice rims would probably make the bike marginally less safe. 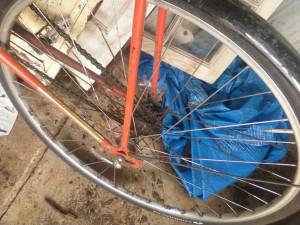 $180 or best offer. Cash is fine. Your parents can PayPal me directly. Or see below: I’m totally into creative trades. Musical instruments (serious – esp synths and pedals); original art (serious); US Currency (for srsly); leisure suits (I’m 6’1”, 180, with long arms and broad shoulders. Let’s stick with dark colors – I’m kind of pale and I don’t like to look washed out); real estate/underwater mortgages (4realz dogg); antique firearms (I promise I won’t trade you the bike and then shoot you with what was previously your firearm in order to steal my bike back and sell it again, although wouldn’t that be ironic, or would it, I don’t know, we use the word incorrectly so often that I’m not sure it matters); casual sex. Show me what you got.*[EDIT: dig on this? The author has a rap band called Sex Party: facebook.com/sexpartymusic, @FFFFFF_SexParty]* 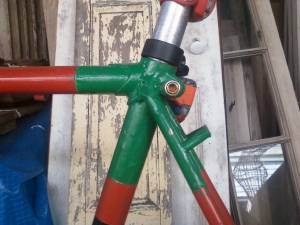