The twisting steep roads of the Marin Headlands proved to be an ideal area for electric bicycle motor testing. For the purpose of comparing the most popular options we ran an E-bike built using a geared hub motor, and an E-bike with a direct drive hub motor. Both the BMC and Crystalyte motor systems demonstrated awesome hill climbing ability in non-assisted uphill rides, although the BMC did perform noticeably better. 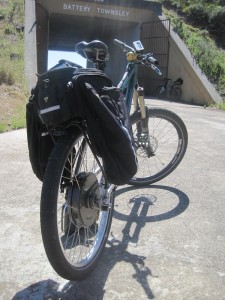 Both systems were run at 20 amps – 48 volts – 1000 watts, the manufacturer specified maximum power setting.  The motors are clearly capable of higher power output but for the purpose of fair testing we followed the manufacture suggested amp limits and ran at 1000 watts. 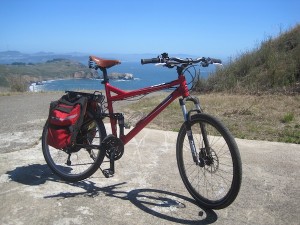 Crystalyte direct drive motor was installed on a Turner downhill bike. The BMC geared motor was installed on a KHS Dual Suspension bike. Both bikes carried the battery in a saddle bag mounted on the rear rack. The other saddle bag was used for personal items. One of the benefits of electric bikes is the ability to lug around heavy items without feeling the added weight. 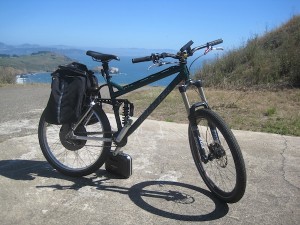 The BMC motor weighs 8lbs while the Crystalyte tips the scales at 15lbs. The lower weight of the BMC was apparent in most riding conditions. The geared internal design of the BMC allows a smaller lighter motor to do the same work as the heavier direct drive motor like the Crystalyte HS-35 . The disadvantage to the lighter geared hub motor is the addition of numerous moving parts to the inside of the hub. Additional gears, one way bearings and other parts make the BMC more complex and more failure prone. The direct drive motors are considered by some to be the bench mark for simplicity and reliability.

The Crystalyte regenerative braking feature proved to be very convenient for long descents. The need to apply constant pressure on the brake levers on a prolonged downhill to slow a 60+ pound E-bike tends to exhaust your hands. Both bikes were fitted with hydraulic disc brakes but the Crystalyte bike was equipped with a switch in the right brake lever. A light pressure on the lever activates the regenerative brake system. The linear drag provided by the regen brakes was a nice advantage, improving the comfort and safety of tackling mountainous terrain while also sending power back into the battery. 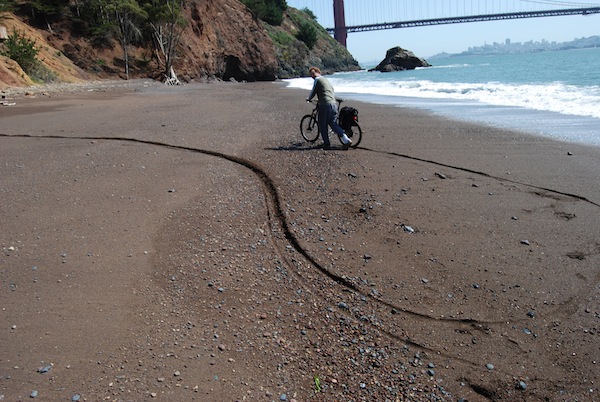 The smaller lighter BMC maintained a bit more of the light coasting feel of the bicycle while offering good power. Both motors were able to maintain almost 30-MPH unassisted on flat land and climb steep grades with moderate pedal input.

The BMC proved to be a better hill climber using the same power as the Crystalite when climbing hills  without pedaling. This is because of the planetary gears.

For more information on the BMC motor, read our review here.