5 Easy Ways to Increase Your Ebike Range Up To 50%

1) Learn throttle-feathering. This is a simple, easy-to-learn technique that  requires an  e-bike twist throttle, so the first step is to swap your thumb throttle for a good quality twist (such as a Magura) unless you’re already set up with one. Prius drivers often talk about a “pulse-and-glide” technique they use to maximize fuel economy, and throttle-feathering is close to an e-bike equivalent of that. The idea is to give the motor the least power needed for whatever terrain demands you’re encountering, and to step up your pedaling accordingly. I almost always lock my e-bike into full throttle on steeper climbs but on all other terrain it’s more a matter of delicately signaling your input demands with a very light touch on the throttle. Often on hub motor rides, it takes just a tiny bit of power (100W) to put the bike in freewheel mode on the flats. On graduated climbs, it’s often the case that the milder uphills can be easily spun up at 50% power levels as long as the rider is willing to put in some pedal effort. Remember, most e-bikes are designed as human-electric motor hybrids, and nothing will kill your range quicker than sitting on your battery without pedaling on hills. 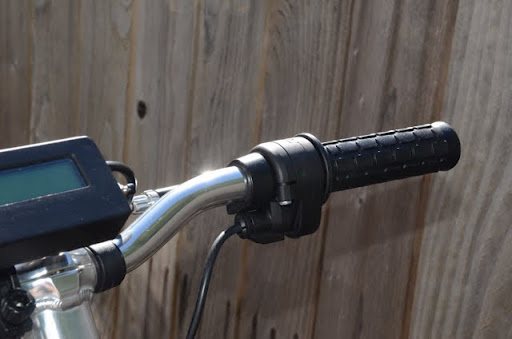 2) Lose the cruise (control). This was a revelation to me about five years
ago when I started playing with range-maximizing techniques on my
Tidalforce S750X, a 1000W+ rear hub-powered bike that can eat up
the amphours like nobody’s business, especially if you’re a power hog like I used
to be. What I discovered is that using the cruise control on anything
other than climbs (where I use it as a full throttle lock) is extremely
wasteful. On the flats and mild grades it is far more efficient to
manually manage your power using throttle-feathering and the like.
Most cruise controls are not smart enough to give you anything but
full bursts of power until your preset speed is reached. It is much
better to manually call for, say, 600W of assist on a slight upgrade
with a slight twist of the wrist than to lock the cruise into an arbitrary
speed and let the controller do the power management. Trust me, the
human touch is superior, and will make you a much more efficient
rider. 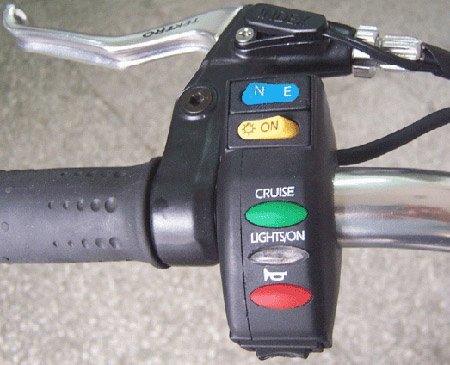 3) Be sure you’re not a victim of brake rub, and keep your tire pressure up. This may seem almost
too obvious to mention but the fact is that a lot of cyclists ride with
either their brake pads set too tight and/or with slightly out-of-true
wheels, either of which can put a big drag on efficiency due to
the friction of the brake pads against the rim. I like to set my pads
with plenty of play but it’s important to still retain the ability to stop
quickly in an emergency. It’s a good idea to have your local bike shop
do a brake and wheel inspection at the beginning of riding season, or
after any kind of crash or serious pothole encounter. Be sure to ask the
mechanic to set the brake pads on the loose side. 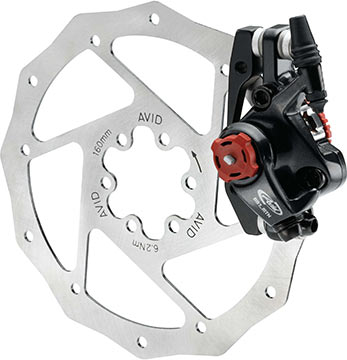 4) Learn to love coasting—and pedaling on the flats. Very minor
downgrades are a great place to economize your e-power and stretch
your range. I especially like to coast after a climb to give both battery
and body a chance to recover. Remember, every mile you coast is a
free extra mile of range, or more, if you have regen. Pedaling with tailwinds
on the flats will also bank you added mileage, and of course coasting downhill
is a no-brainer. Very minor power feeds of 200-300W on flat dirt roads or
blacktop accompanied by vigorous pedaling can get you up to 3 miles
per amphour or better, more than double what I normally see
with more aggressive e-demand.

5) Get yourself a good onride volt/amp meter and learn how to use it.
I have an early version of Justin’s great Cycle Analyst and can’t say
enough good things about it. It is a superb diagnostic tool as well as
a wonderful help in learning how to manage your power and extend
your range. It’s also the ultimate geek e-bike tool, and you will
impress your friends with your knowledge of all things battery-related
once you’ve lived with it for a couple seasons. The Cycle Analyst
has saved my battery pack from almost certain premature demise on
several occasions when a sudden drop in voltage signaled either a bad
cell or loose connector on one of my subpacks. In all cases I’ve been
able to stop in time and do a quick roadside fix with just wire strippers
and electrical tape. For trying to manage your range on those longer
daytours where every watthour counts, these meters are invaluable
aids. And Justin’s latest version is better yet (see our review on it here), and really
functions as a very smart controller and battery monitor. 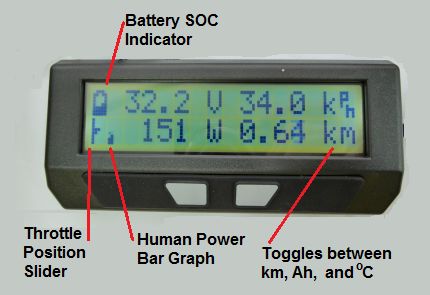