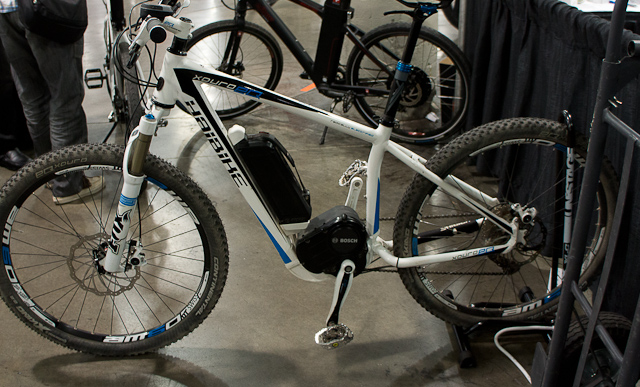 Although Interbike 2012 in Las Vegas was slammed with new products in the hub motor category, there were very few mid-drives. Mid-drives offer many advantages over hub motors, but are more complex and more expensvie to build. (read our story on the benefits of mid-drives). It is however one of the most exciting ebike technologies around because it is generally much more efficient, so riders can go further on the same battery pack.

Here are all the mid-drive bikes I saw at Interbike…not very many, given I probably saw 100 different types of  Chinese-made hub motor bikes. To read about the hub motor Chinese invasion at Interbike read our story here:

Recently Currie was bought out by a large Dutch Company, Accel Group (read our story here). This has given them a large influx of cash to buy out some smaller brands, and it also has given them access to many of the exciting mid-drive ebikes available in Europe.

Currie displayed two new bikes to their product line which are mid-drive bikes. Most exciting is that it looks like Currie has made a deal with Bosch to  finally bring their magnificent bottom bracket motor designs to the United States: 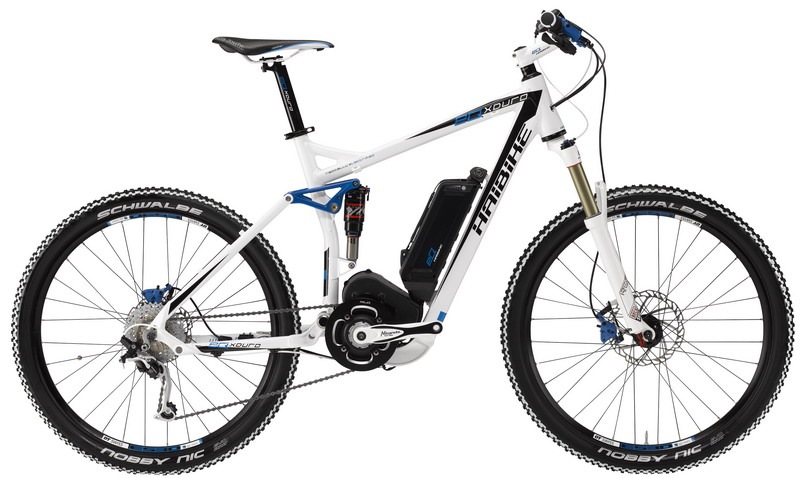 I got to ride this bike, and its 250 watt Bosch mid drive feels as zippy and fast as 750-watt hub motor bikes. Also, the torque sensing  was silky smooth. I was very impressed with the ride of this bike, especially given it is powered by a small 250 watt motor. Even though the motor is small, in low granny gears this bike can climb monster hills, and placing the motor inside the frame makes it safer for rock-crawling.

The Protanium is a shaft drive system with integrated electric motor that was introduced a few months back at Eurobike. It has a 250 watt motor capable of bursts of up to 500 watts. It offers a lot of advantages over a traditional hub motor system. In addition to running through the gears of its internal-gear hub (IGH), it also has no chain, so it’s cleaner with less maintenance. However, it is doubtful that such a quirky, low wattage, complex (and expensive) system will work out in the US Market. This bike is being introduced by Currie for a possible 2013 release. 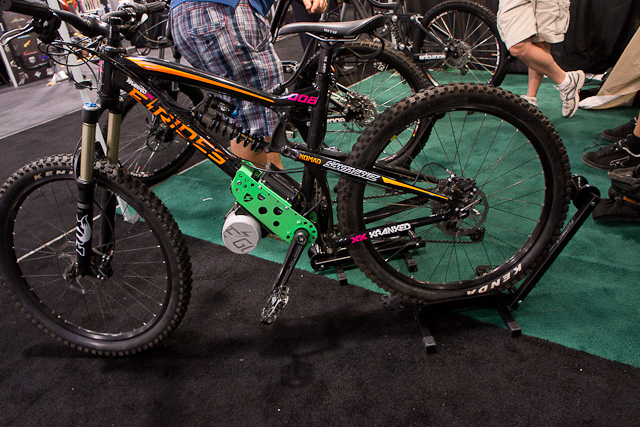 Ego Kits (read our review here) are an interesting German-made kit that bolts onto a full suspension frame, and runs through the gear chain. For a battery pack solution, the Ego uses a 48V / 12-Ah lithium battery pack in a high quality back pack. This allows the Ego kit to be mounted to a wider range of frames, usually full suspension bike frames, but at the show they also had one mounted on a small BMX frame. The Ego Kit guys would blast up and down the strip on these bikes and seemed to be having a good time. 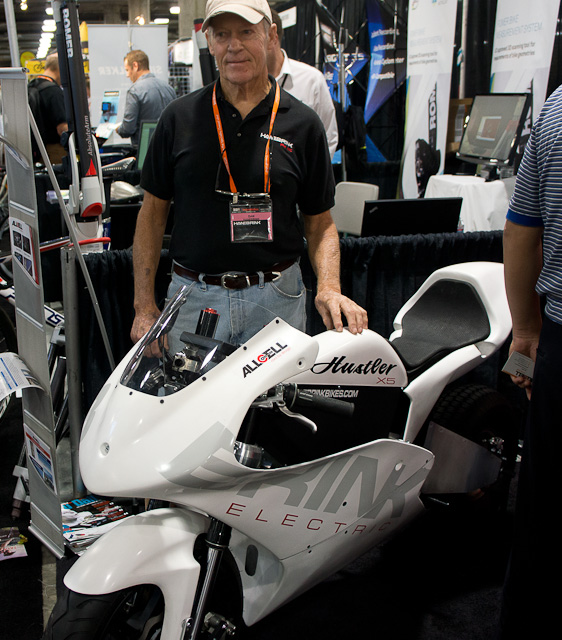 Dan Hanebrink took his fat sand bike (read our review) for which he is renowned, and put in a much bigger motor (the Crystalite 5304, same hub as the Stealth Bomber), drilled air-cooling holes in it, and put motorcycle-like fairings on his machine. He ended up with a street electric bike which he claims is capable of speeds of up to 80-MPH.  This very well could have been the fastest electric bike at Interbike…between this and the white Stealth Bomber, it would have made a heck of a race! Dan is able to outfit his offroad sand bike with a powerful Crystalite x5 upon request to any customer, and make a fast machine capable of blasting down trails and off road at unbelievable speeds.

The Hanebrink is the original fat-tire sand and snow bike: 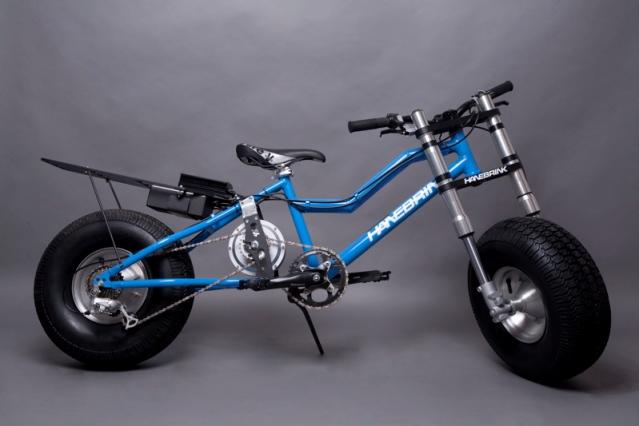 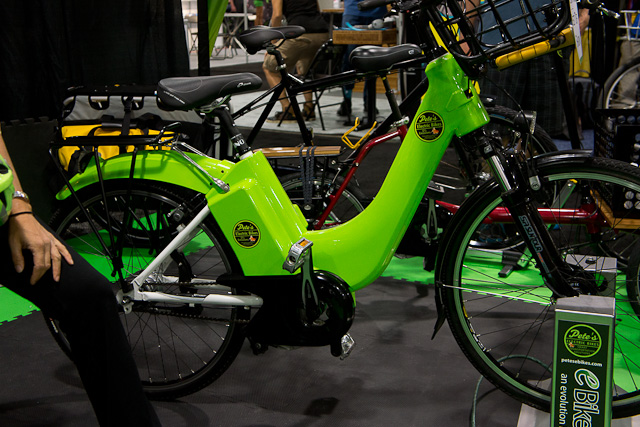 Panasonic makes a mid-drive system complete with batteries, and it’s very popular in Europe, but barely available in the United States. That is because only one company, “Pete’s Bikes,” has an exclusive deal with Panasonic. Pictured above is a bike outfitted with a Panasonic mid drive. Like the Bosch, the Panasonic requires a custom-built frame. This e-bike has been painted “Pete Green” and has the Pete’s logo on it.  Pete retails the bikes at around $3000. I hope to see Panasonic drives in more USA distributors hands in the future so that the price will come down for these systems, of which I am a big fan. 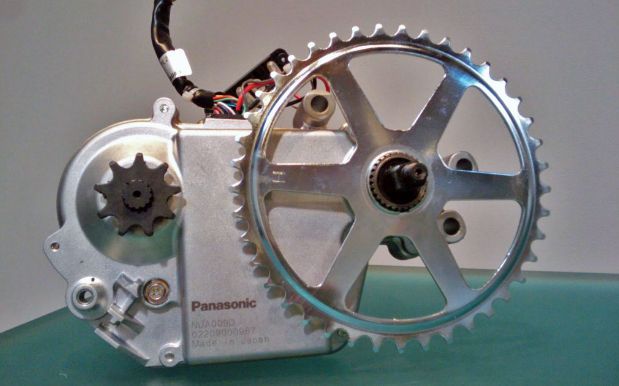 So there you have it. There were only a handful of mid-drive electric bikes at Interbike this year.  At Eurobike a month ago there were many mid-drives on display (read our story on Eurobike mid drives here)

So what do you think? Are mid-drives dying? Or have US “manufacturers” just not figured it out yet?

Hello, I have a Bultaco Brinco electric bike on which an

Hi That beautiful That is imaging Prix I'm in Tunisian