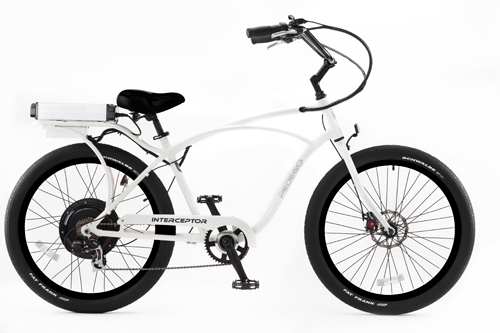 Eric Hicks Mar 24, 2012
3 Comments
14,420 Views
Electric Bikes
Eric Hicks
Editor Note: Please read our complete review on the Pedego Interceptor here. . The Pedego Interceptor is an interesting carnation of an affordable e-bike with a 500 watt direct drive motor and 52 volt battery pack giving it plenty of upgrade potential. It is basically a high performance bike at a reasonable price.The Interceptor was designed for police departments and thus made to go fast, illegal type fast. It has been rumored that Pedego regulates the speed and power of this bike before they ship and you can request a “deregulated” version that is capable of 30mph. The bike reviewed below seems to be deregulated, but we have heard of other people buying this bike and it only be capable of speeds in the low 20’s. Regardless if your bike is regulated or not you can always get even more speed than 30mph if you just order a 48 volt 50 amp controller from a customizer called “lyon” and have a 40mph bike. At 48 volts 50 amps you will be running over 2000 watts to a direct drive hub motor that can easily handle that kind of power.
The Pedego Interceptor has no suspension, but we at electric bike.com believe that suspension is not necessary on a road cruiser anyway. Check out our article on suspension here. As you will see in this article, the author spent $2800 on a bike with battery. A lot of newbies will be shocked that an electric bike can cost that much . But understand that lithium battery is expensive, and the author bought 20ah 52 volts worth which is a lot. The Interceptor is a fast bike at a bargain price. The only reason a commercial company is able to offer one so cheap is every component on the bike is made in asia. However with Pedego you get a California company that stands behind their products, will pick up there phone or answer emails and will be able to sale you spare parts etc as things break.
The following technical review was written by Jérôme Daoust and was originally posted on his site. He has generously allowed us to re-post here on electricbike.com.

Manufacturer’s picture below. My bike has 2 batteries (on top of each other) with Aluminum casing finish and the seats are slightly different. From this point on, I will only publish selected rides…

2010/8/15 at Huntington Beach, CA. Second battery is an option I paid extra for. I added an Airzound horn and a Planet bike / Superflash tail light. No suspension seat post. High resolution version of the same picture.