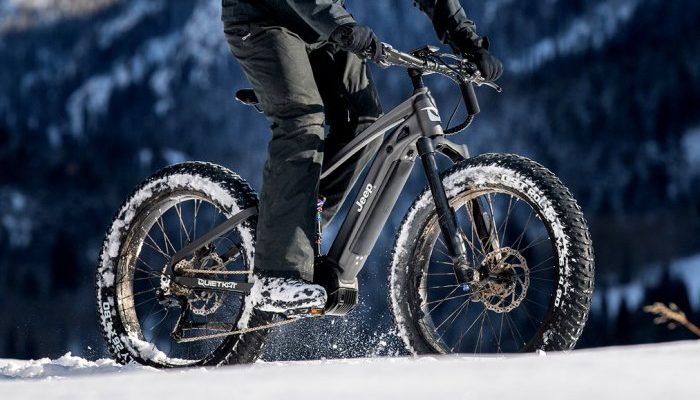 The TV commercials that are shown during the Superbowl will put billions of eyes on whatever is shown. If you were paying close attention, there is a Jeep commercial where actor Bill Murray is riding a fatbike. I immediately wondered if it might be an ELECTRIC fatbike?

The commercial is for an Orange 4-door Jeep Gladiator, and it didn’t take long for me to find out that YES!…it was indeed an electric fatbike, so…lets take a look.

The movie Groundhog Day is a movie that I can watch once a year for the rest of my life. Its a comedy with a heartwarming message about being human and finding a way to be happy.

Groundhogs are a plump cat-sized rodent who comes from the same family as squirrels, badgers, and marmots. They burrow into the ground to live in tunnels and dens, like prairie dogs and gophers. There’s a town in Pennsylvania called Punxsutawney, and many years ago they started a tradition of claiming they had a talented groundhog that could predict on February 2nd whether the winter would end soon, or if winter would hang on for a while longer.

He pokes his head out of his burrow, and if it’s sunny enough that he can see his shadow, there will be six more weeks of cold weather. If its cloudy on February 2nd, then spring will come early. It may sound silly, but it’s one way to get tourists to visit Punxsutawney, and who cares why they are having a winter festival? If everybody has a fun time, you really don’t need an excuse.

The movie “Groundhog Day” is a comedy about a TV special events reporter who is tasked with covering the Groundhog festival. Actor Bill Murray plays the reporter (Phil Connors), who is very bored, and can’t wait to finish up and go home.

Phil is a very shallow and self-centered person, but he finds he is attracted to his producer Rita, played by Andie MacDowell. Rita is a kind-hearted person and is repelled by how much of a selfish jerk Phil is being. Then, something mystical happens.

Phil begins waking up to the same exact day over and over (Its been estimated by fans that for everything shown to happen, Phil did this for over 30 years). At one point, Phil gets the idea in his head that if he was to kidnap the groundhog, maybe that would break the curse, and he could go back to a normal life. This commercial is an imagined scene where Phil and the kidnapped groundhog are going on one of their adventures.

The curse is finally broken when Phil decides that he wants to become a better person, and after he begins helping others during his recurring day, he finally finds happiness, which leads to Rita becoming attracted to him, with true love ending the curse.

If you haven’t seen it, Groundhog Day is a fun movie, and I recommend it.

QuietKat, and the Jeep Licensing

Jeep is owned by Chrysler, which is then owned by the global conglomerate “Fiat-Chrysler-Automobili” (FCA), which also owns both Ferrari and Maserati. However, they have not started making ebikes, and this one actually comes from QuietKat.

The QuietKat home website has a variety of e-fatbikes with the BBSHD, and several with the Bafang Ultra. The Jeep-branded ebike has it’s own website, and it can be found by clicking here.

If you are wondering what drive system is on the Jeep E-Fatbike, we are VERY familiar with it. It’s the Bafang Ultra Max, and you can read all about it in our teardown article, found by clicking here.

Jeep is listing their version as a 50-state legal 750W mid drive using 48V, which is laughable. Bafang conservatively rates this as a 1000W drive, and hot rodders have run it at 2500W. Of course, if you over-ride the stock controller to raise the amps, it will void the warranty, violate the law when riding it on the street, and may possibly overheat the motor if you are not careful.

When using high power in a mid drive, you must exercise caution, and make sure you are in the proper gear. Starting from a standstill on a steep uphill when the bike is in top gear will make the controller and motor run hot. However, if you leave it at the stock 750W, it is unlikely to ever get hot.

I am typing this article during the Superbowl, because I just found out about this. I haven’t ridden a Jeep QuietKat, but I have test-ridden other ebikes with the Ultra Max, and I think anyone who is interested in getting an off-road full-suspension fat-tire ebike will be very happy with this version. Personally, I would void the warranty on the first day and rip a full 2500W through it.

No word yet on the price, and I suspect the number of deposits that will be rolling in this week will determine how much daily production the Chinese factory will ramp-up to.

There are so many ebikes out there on the