EcoBikeAdventures.com hosts rides in the mountains of central California, and they sponsored a fantastic annual event called the “Lost Sierra Electric Bike Festival”. When the next one comes around, I am definitely going to it!

These guys formed a business that allows them to be guides to people on vacation, and it is for people who want to glide on quiet electric bikes through beautiful mountains…What a life! 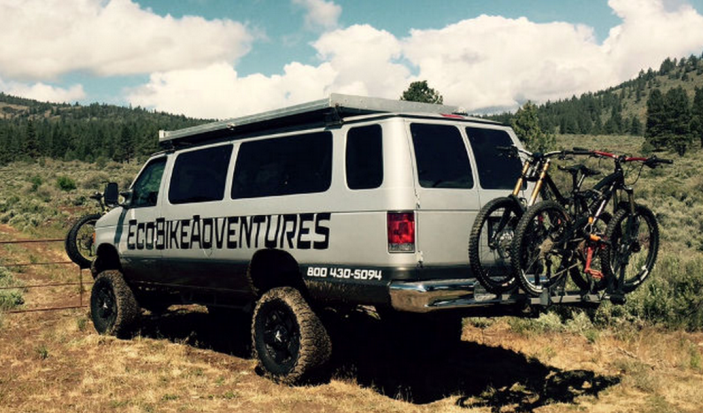 This year might only be the second “Lost Sierra Electric Bike Festival”, but…these guys have been doing the ebike tours for a while. 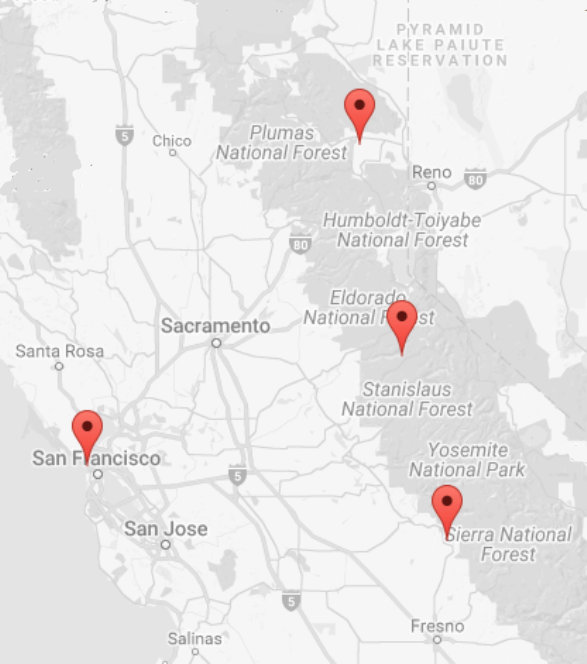 There are four locations where EcoBikeAdventures.com hosts ebike tours, seen on the map here. 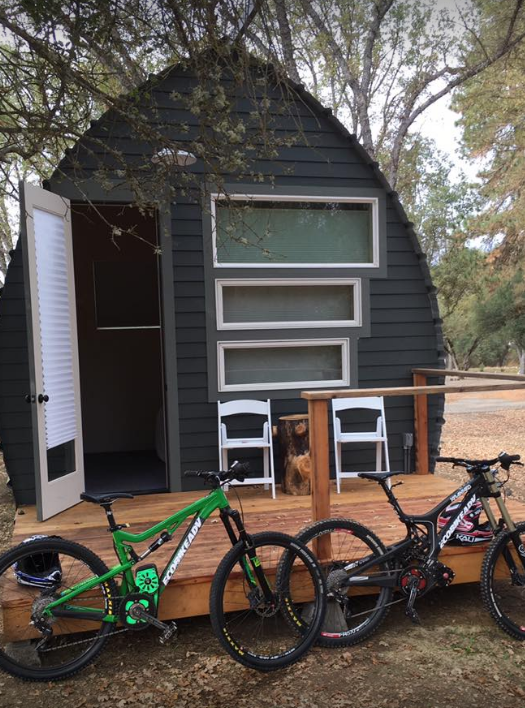 Here is a pic of a rental cabin, and a couple of rental ebike options.

I wish I had heard about this sooner. After a little research, I think these guys are making a lot of decisions that are right on the money. This event definitely fills a niche that is not being served when it comes to electric bikes. Also, the event is family-friendly and dog-friendly. There are cabins available for rent, and it is also RV-friendly. You can bring your own ebike, or…they have Kranked ebikes to rent. 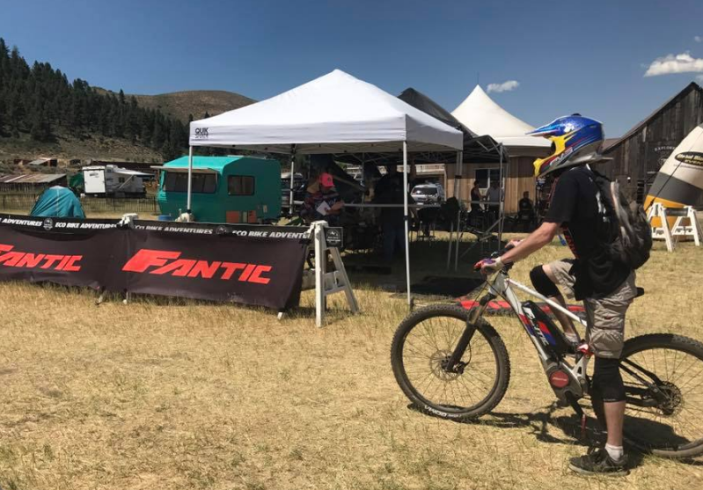 Factory turn-key electric bike models were welcome, but…the exciting feature was that kits were allowed in the races…guess who won? 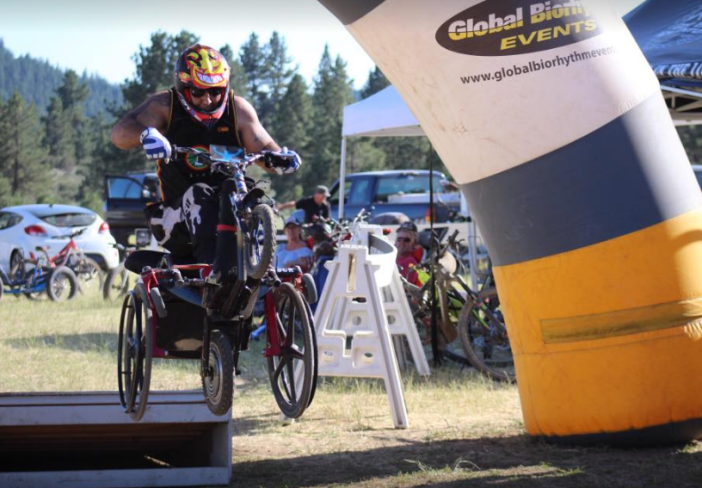 I thought someone had misunderstood when they told me that a powered wheelchair had participated in the races. This picture is proof that a whole new world is opening up to people just like this participant. Email me his name so I can put it here! 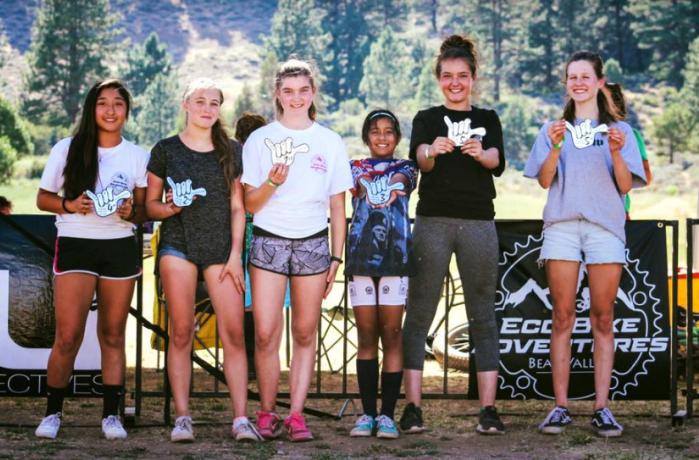 The top six spots in the junior race were taken by the ladies. You may think they’re “cute”, but…if you want to race them, you better bring your “A” game. One mistake, and they will leave you in the dust. 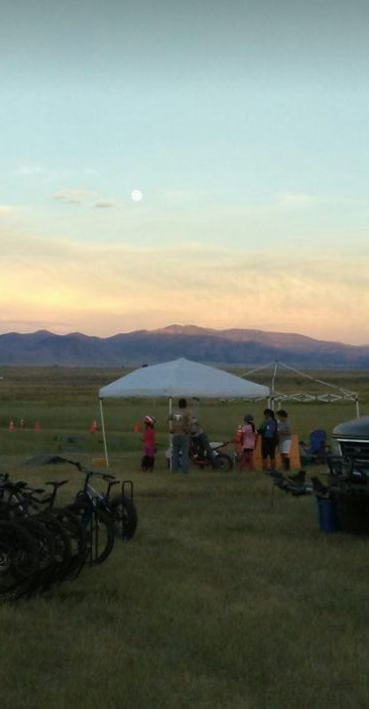 When the sun goes down, that only means that the party moves indoors.

“…After a 5-hour Drive and traversing the Donner Pass, I found the hanging valley somewhere up above Downieville. Temperatures were nearing 100 degrees F, and upon the trial run of the ATV race track, I found it to be twisty, turny, hilly and very dusty with powdered silica sand 3 inches deep in many places. It dawned on me that I would not be able to open up my throttle much. So, I had two dogs in the fight.

First up was my Luna Ludacris-powered belt-drive hardtail. I had taken off the throttle for this PAS race of 6 miles, and was using the latest Steve Penoff programming on the Ludicrous so as not to melt any nylon [gears]. After only crashing once [LOL] I was happy to finish fifth, and availed myself of the EMT tent to ascertain as to why I was seeing so many dancing colors (turns out it was the heat, dehydration, and altitude).

For the “throttle class, open” 12-mile 2-lap race (when Chris and Craig of Eco bike tours say “open”…they mean it, no bullsh**t limits like they had at sea otter) I had planned to race my Electric Race Technologies pimped titanium rigid mountain bike. I was still rather beat up and delirious from the first go-round, so I decided to let discretion be the better part of valor, and hand it to the younger guys on this one (I’m 60, don’t know what happened).

So, in the time trial intervals, the Illuminati of the nascent electric bike race world launched from the starting line! The likes of Tangent Dave , Kranked Bjorn, EcoBikeTours Chris, The Flyin’ Hawaiian and others from five different states hammered their throttles and disappeared into the woods. 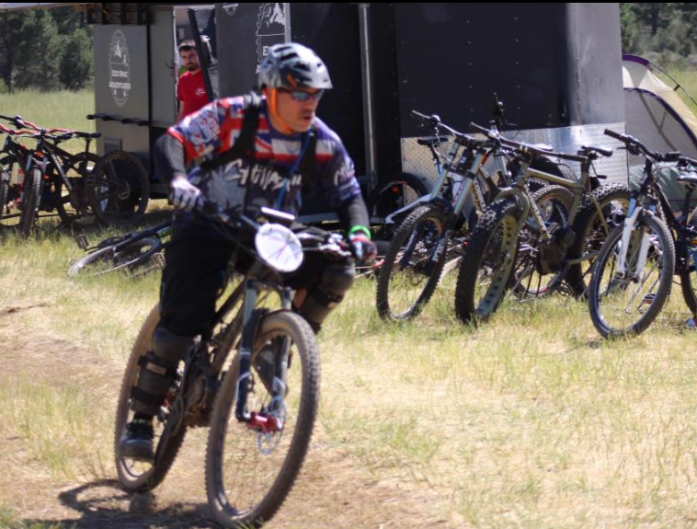 Someone email me this guys name, and what ebike he was riding!

Soon, Kranked Bjorn was down with a technical secondary chain issue, and Dave got stuck behind some ATVers in the middle of the f*****g track. Wild card “Bird Man” Emglo came flying by with his chain flailing about all derailed…(fastest e-bike I’ve ever had the pleasure of riding, by the way)… halfway to Victory.

Emglo’s DIY efforts produced an industry smashing MXUS V3/Sabvoton/bluetooth programmable Qulbix Raptor-framed rocket, which of course also won the drag race. Thanks to Alan Chintu Hu’s genius programming of the Phase Runner for a BBSHD, I pulled 2nd place in an elbows and handlebars clashing mano-a-mano elimination dirt-track drag race, beating some other V3’s while spinning a 27.5 X 2.8 rear wheel…” 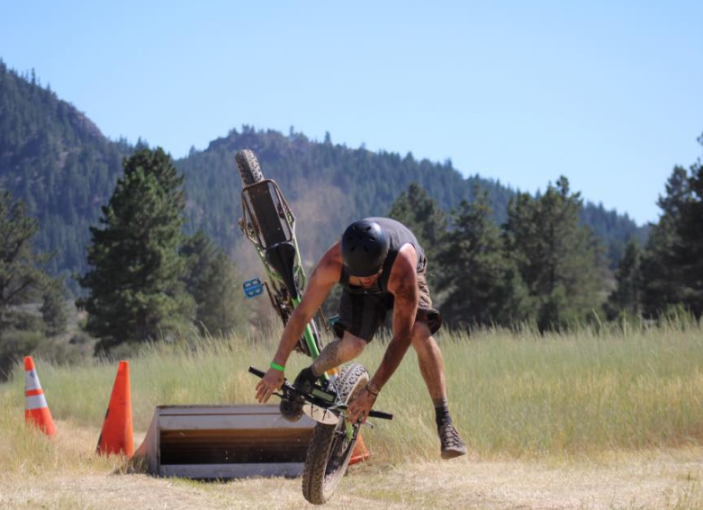 This event has an EMT tent with professional help, if you need it. Did you cringe when you saw this pic…like I did? Been there, done that, got the scars and the T-shirt.

“…A couple of guys ate s**t on the long-jump, including a guy with huge balls in a motorized wheelchair. I can’t remember who won that event…I think it was a kid. And by the way…the kids were awesome and there were some fast girls! If you think you’ve got game? Try to show up next year, maybe you can beat them…

This event, overall, is the real deal…and could use more participants. One race $10, 2 races $15, all-you-can-eat tri-tip lunch and Lagunitas Beer kegs $20.
Memories, idea exchange and camaraderie, priceless. Will I go next year? I’m already there…” 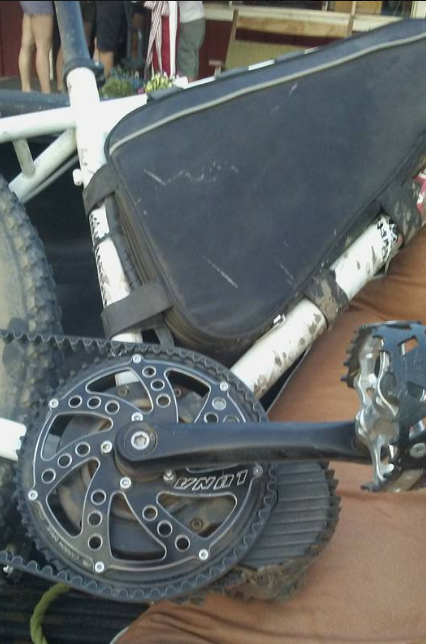 The 2500W Luna Ludicrous. Wait a minute…that’s not a chain. Is that…a belt? 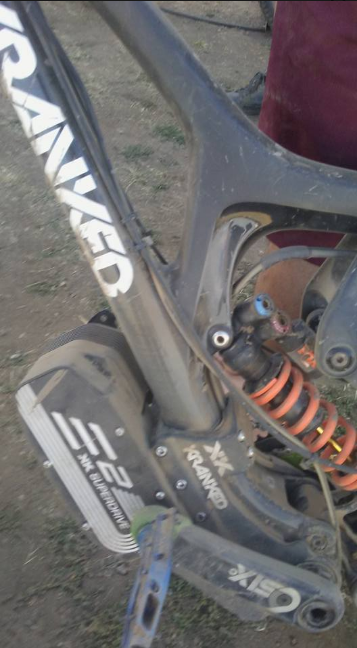 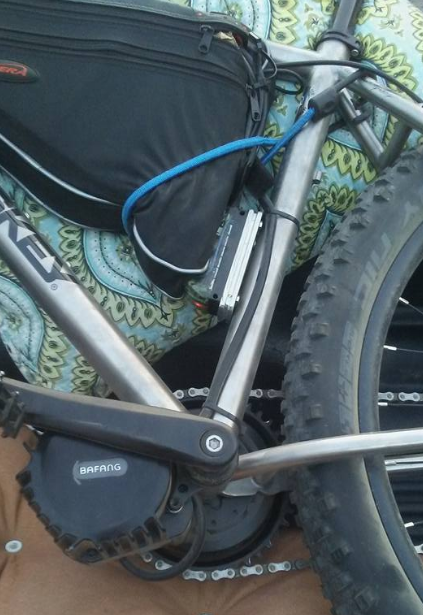 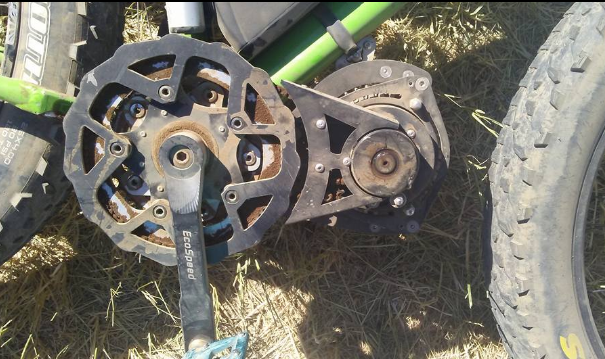 This looks like its Bird-Man Emglo’s mid drive with a derailed chain. Hitting a lot of bumps makes the chain bounce around. Somebody get this guy a chain-guide! 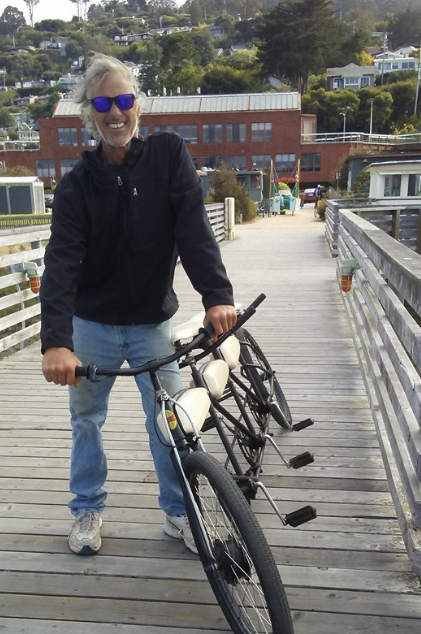 Nick Borgstrom, from Outside Diameter bikes in Sausalito. He is shown here with his custom triple-tandem ebike, that he uses to ride around beautiful Sausalito with his wife and daughter.

“…With every molecule and fiber of my being, flying at speed through the atmosphere, blood and adrenaline pumping to my fingertips, with hitchhiking intestinal flora screaming what the f**k!…I come alive. I’m not ready to embrace the whole stagna-saurus risk-averse lifestyle just yet!…” 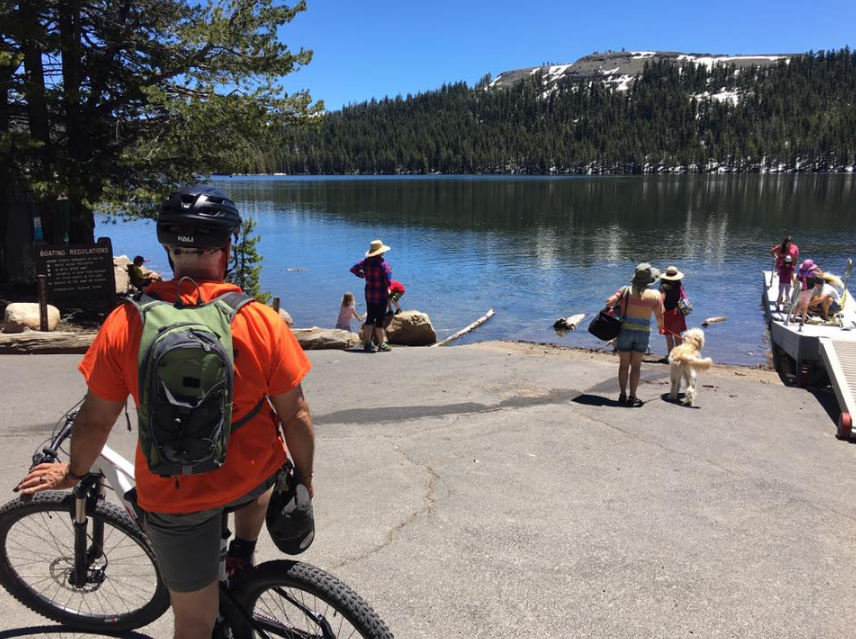 The upper Alpine Lakes in Bear Valley is one of the EcoBikeAdventure.com options…

The Lost Sierra Electric Bike Festival is a day of fun, competition, networking, and fellowship for all electric bike enthusiasts – as well as an amazing day out enjoying the beautiful mountains and sunshine at the 2000 acre Diamond ‘S’ Ranch in the heart of the Lost Sierra.

Parking & attendance are free, click “Tickets” above to reserve your spot via Eventbrite!

You can also camp with us, and enjoy a buffet-style Western BBQ in our traditional old school barn, and jam out to some music with family and friends.

We’re stoked to meet everyone, can’t wait to see you all!


Registration for the electric bike races will be done on-site. To reserve camping or to request further info, please email us at: info@ecobikeadv.com

[be aware, the first festival in 2016 was on August 27th, and this second festival was in July of 2017. If you are interested in attending in 2018, like me! check ahead of time to be certain]