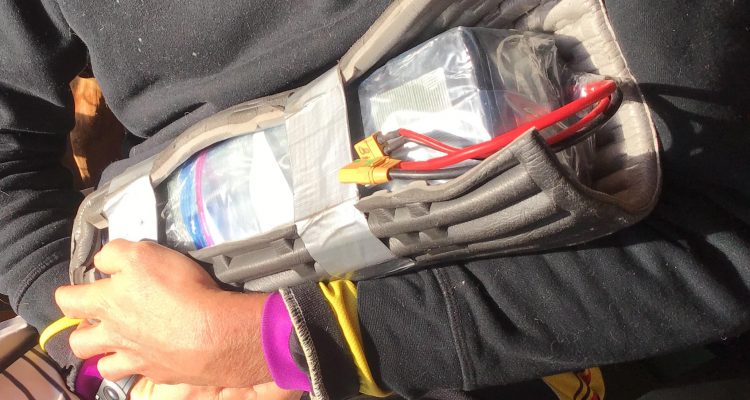 If you treat your ebike well, it will last for a very long time. The one part of any ebike that is the most sensitive to temperature, vibration and abuse is the battery. In the last 5 years, I have destroyed more than my fair share of batteries. This article is an attempt to help educate you on what I did that I should not have done, and how you can make your batteries last twice as long as what they were designed for.

Want to double your battery life? Only charge it to 80%

Although you lose a bit of pack capacity, the best way to double the life of your ebike packs is to only charge them to 80%. You can also increase the life of your pack about 50% if you only charge it to 90% if you feel like 80% is just too low. You can get a Cycle Satiator which will charge any size pack to any voltage (but you have to program it a little bit) or just do what I do and buy a bunch of Lunacycle’s 300W chargers. They have chargers for 36v, 48v, 52v, and 72v advanced chargers on their site. The charger must be called ‘Advanced’ or it won’t charge to 80% or 90% so read the description when in doubt. When purchasing a battery pack you might want to get a larger pack than you need so you can get away with only charging it to 80% and still get all the range you need.

Moisture is one of the biggest ebike battery killers

If you’re using a standard plastic frame pack like most ebikes on the market have, it doesn’t really do well in heavy rain or moisture. The batteries are not protected well from water and it’s not uncommon for water to work its way inside the case and create problems. This can be mitigated by wrapping the entire battery in a large ziplock bag and taping it shut or using silicone around the seams of the pack.

As far as I know, there is only one ebike battery on the market that is 100% waterproof and that is the Luna Wolf (Pup, Dire Wolf & Wolf v2) series of packs. The batteries, BMS and wires are potted leaving only the XT60 and XT90 charge connectors exposed. You can quickly and easily make a water-resistant connector with a male XT60 plug and some heat shrink tubing and a little silicone. They take <5 minutes to make and I have a bunch of them for my different wolf packs.

Batteries rubbing against the frame of your ebike will cause issues. Make sure that you have plenty of padding and make sure if you use a triangle bag that you remove the water bottle screws on your frame. Over time those tiny water bottle screws will literally eat through the fabric and padding on the bag and into the battery pack. Don’t ask me how I know this. The more secure your battery is from shock and vibration, the longer it will last. Thermarest pads make great shock padding and they will also keep your battery warmer.

Use Velcro to help secure your battery to the ebike

I buy 1″ Velcro tape that has hooks on one side and loops on the other (like this stuff at ~$1 a foot). This tape is amazing for holding your frame packs more solidly to the bike frame and preventing vibrations that will eventually tear out your water bottle bolts. Keep in mind those water bottle bolts are designed to hold 1/2 liter of water and your 8lb battery pack weighs about 8x more than a standard water bottle. The water bottle when jostled also does not create as much shock force on the bolts because the water can slosh around in the container eating up the energy. One or two strips of velcro tape weigh almost nothing but work wonders on keeping your frame pack from wiggling. I have also sewed in velcro tape to replace broken zippers on cheap triangle packs and it works well for that as well. Yes, I am a heterosexual man who knows how to sew and loves making clothes. Deal with it.

I had a Hailong plastic frame pack that flew off because I forgot to lock it down to the bike on a bump. I was going about 30 mph on the ebike at the time. The battery survived remarkably, but if I had a thick piece of velcro around it then it would not have come off even though it was unlocked.

Use the right charger for your pack

This goes without saying, but don’t use a charger that is the wrong voltage for the pack you’re trying to charge. If you have a bunch of batteries that are different voltages like I do then write the voltage on the connector of the battery and on the charging connector of the charger. Check to make sure that both the battery and the charger voltage match before you plug them in or bad things could happen if the BMS doesn’t have overcharge protection.

Leave batteries at 60% discharge when storing for long periods

So most manufacturers tell you to store your Lithium batteries at 50% charge but I have found that over several months they can drop down to much lower so I tend to store them at about 60% charge. You can tell that the battery level is ~60% when the voltage on the battery matches the nominal voltage of the pack. For a 52v pack that means that at rest the pack is reading 52v on the connector. Put the battery inside somewhere it won’t get warm or cold, on a bookshelf is great. I wrote this very long article about pack storage several years ago, and most of the information still holds true today.

Don’t let your packs get super cold, or super hot

Both when using the packs and when storing them try to keep them between 40F and 90F. If you plan on riding in the snow then keep your batteries inside before you go out. When you reach your destination take your battery off the ebike and bring it in with you. Do not leave your batteries out in the cold, you will lose a lot of the power by doing so. In the winter I ride with a backpack battery which helps keep the heat of the battery in, thus giving me a much longer range. You can also wrap batteries in Thermarest pads to increase their ranges in extreme cold. I ride down into the <0F range and all the way down to -20F. At these temperatures, you will lose HALF of your pack capacity if the pack gets that cold.

If you have a 2500W peak power BBSHD with a ludicrous controller and you try to power it with a 30 amp frame pack you’re going to overheat the BMS and not get anywhere near the amount of power out of the drive unit than you could with a larger battery with a bigger BMS. I wrote this article about sizing the right size BMS with the right drive unit, read it and understand it before you make your battery purchases. If you buy the battery and the motor together then the battery should be sized properly for the power you need.

BMS stands for Battery Murdering System, no really it does

Almost all the batteries I have killed have been because of a failure of the BMS system. Most batteries I’ve been able to bring back to life with a replacement BMS (around 6 packs), but not all of them. When replacing a BMS I recommend swapping out the BMS with one that is exactly the same so that all your wires line up and you can use the header block for the sensor wires. If you feel uncomfortable soldering and dealing with lithium batteries, do yourself a favor and just send it back to the factory for a replacement or repair. It doesn’t make any sense to risk serious risks to your health by messing with Lithium packs if you’re not skilled. You should always use safety glasses whenever doing anything with lithium packs because an eye is a terrible thing to waste. (don’t worry, you have a spare)

Be worried about fires, always

If you own an ebike you should constantly be thinking about what will happen if your batteries spontaneously combust. Even if you’re using genuine cells (many cheap ebike batteries from China are made with fakes) and you do everything you are supposed to do, your battery can still explode. I charge my batteries inside my woodstove, which I think is the only safe place inside your home to do it. If you charge it in your garage I recommend putting the battery in a fire-proof box (with air holes) so that if it blows up it won’t burn your house down. If there are no air holes if the battery combusts the metal box could explode like a bomb.

Although ebikes have very low maintenance when cared for properly, the battery is one of the most expensive components and the one that needs the most attention. If you take care of your ebike battery it should give you many years of happy service, if you abuse it then it will take its revenge out on you like a bitter, jaded ex-girlfriend.

Thanks to Tom Trophy for the inspiration to write this article. Tom and I like to take turns licking ebike battery connectors just to see what will happen. I always let him go first.