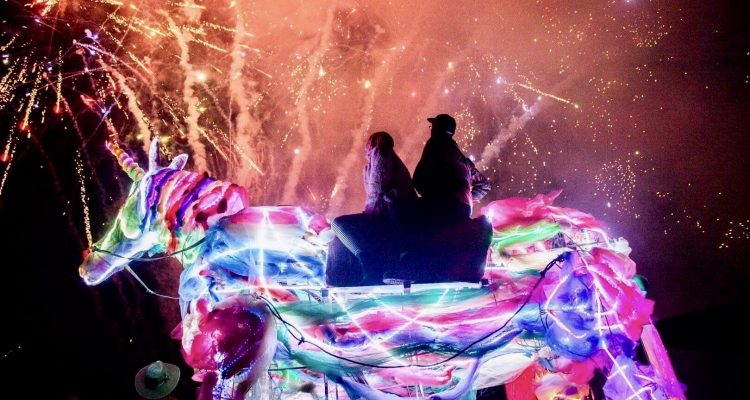 Meet Sparky, the giant unicorn art electric quadricycle that you can actually ride

My good friend Doug Shire told me a year ago that he was going to build an art car. I asked him

“Why build an art car that is expensive, heavy and will just get harassed by the cops when you drive it around town when you could build an art ebike which will be much lighter and more fun?”

Doug took my advice to heart and worked for a whole year with his good friend Larry Clarkberg to build a truly amazing creation. They built a Mutant Art Vehicle for Burning Man that was 12′ tall, had a fully articulated head and puppet legs that gallop like a real unicorn (yes Unicorns are real and to hell with anyone tells you different). The entire bike can hold 2 people under the unicorn and one or two people riding up top. This article is about their creation and the process of powering it with a Cyclone 3000W mid-drive.

When I first started to talk to Doug about the platform he should build on I told him that he wanted something with 4 wheels and a solid frame that would be able to support the hundreds of pounds that the unicorn was going to end up weighing, especially when carrying 3 full-grown adults which can be as much as 600lbs themselves. I’ve been told that it was designed to support 500lbs of riders on the top. He found a cool quadricycle on ebay with ghetto wheel-friction brakes and without any gears which is pretty much what we wanted.

This quad bike was nearly impossible to pedal around because the gearing was too high, and that was before any weight was added. The structure of the unicorn was built mostly with square tube steel and welded with a Tig welder. The pivot for the head and neck was a ball joint from a trailer and a cut-off hitch which allowed the head to freely move in all directions almost like a bobblehead toy.

There was a large speaker mounted at the front to turn the Unicorn into a mobile dance party as well. The first iteration of the Unicorn had this amazing sequin material that covered the whole skin, but that version of the art vehicle was turned away at the gates because, well fear of a MOOP planet. Sparky was then skinned alive so he could get in the event and redecorated by the good people at Rhythmwave, my alma-matter. In his second iteration, he was decorated in a much more ‘colorful’ manner with whatever material they could scrape together (the playa provides).

Sparky’s 15 seconds of fame came when Paris Hilton got to ride it on the playa and posted it to her Instagram account and got several million hits (just google Paris Hilton Unicorn and you’ll see what I mean). The national news media ate it up, and with good reason, because I’m not sure I think Paris Hilton is awesome, but Sparky totally is.

Powering Sparky with a Cyclone 3000W mid drive took some doing. We opted for the triple ring which had a tiny 25T ring which created about the right gearing ratio. The bottom bracket was not ‘standard’ so we ended up cutting it off entirely and just welding a standard bottom bracket off a steel bike to the adjustment mechanism. We couldn’t use the very thick chain that came with the Quadcycle because it rubbed against the drive unit chainring so we ended up using a standard cheap KMC single speed chain (actually it was a bunch of chains strung together). The rear gear on the axle was too thick for the chain so we ended up angle grinding it down to make it skinner all while leaving the axle on the bike.

Steel is truly amazing, it’s easy to work with and modify yet insanely strong when it’s welded right. There are a few other materials that even come close. If you’re ever trying to make a project like this, I would not even consider doing it out of anything but steel. The 3000W Cyclone kit we used can be bought here for $350 and will work with any battery from 48v up to 72v nominal. This kit is NOT for beginners and it is about as dangerous as mounting an electric chainsaw between your legs. I can’t emphasize how important chain guards on the motor are if you do a project like this. Treat your mid-drive with the respect of a chainsaw and you’ll keep all your fingers.

Sparky was driven by a 52v 25R triangle pack which produced more than enough power to drive him around for several hours. The only real problem with this build was the brakes. Because Sparky was so heavy, if he got going on a downhill incline it took a lot of effort to try to get the bike stopped. As long as he was always only allowed to roam on flat and level ground then it was really a non-issue.

Sparky took thousands of man-hours to build and a whole lot of cold hard cash. If you want to support Doug and what I consider to be ‘real art’ there is a gofundme campaign here you can donate to. I’m sure whatever Doug comes up with for his next project, well that will be amazing too. Good art takes a lot of time, money and creativity which Doug seems to have in abundance. I keep telling him to quit his job and just make cool art full time, but that has yet to happen.

I can dream. You can too.