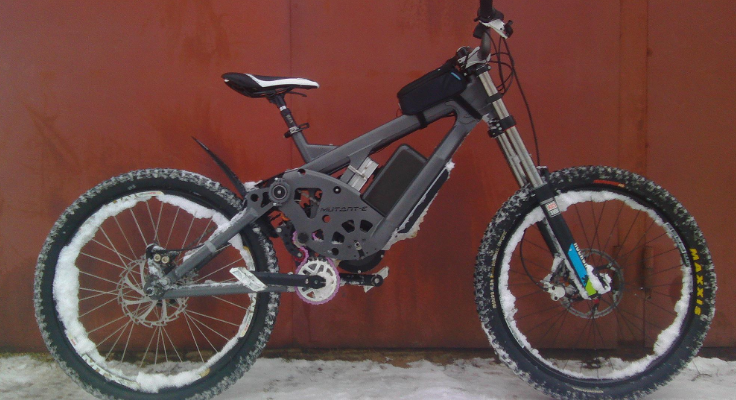 Every once in a while I’ll start thinking I have seen just about everything that can be done, and then? Someone like this comes along and totally blows me away. This is one of the most innovative and well done customs I’ve ever seen….and I’ve been doing this for a long time.

I stumbled across a youtube video on the internet, of a Russian ebike builder (link below), and I immediately saw that his creation was very unusual. I dug for as much information as I could find, and the more I found out…the more I wanted to know. My search led me to a Russian ebike website called elektrotransport (Isn’t this how most people spend their spare time?). His name is Sergey, and his internet username is “ferum”

The muTant story starts with a very unusual Down-Hill (DH) bicycle, and the first time we became aware of the Zerode G2 (From New Zealand) was when we wrote about the small and powerful Tangent Ascent mid-drive, found here (scroll to the bottom of the article). The rear suspension arm has the pivot mounted high rather than in the common lower position.

This configuration was chosen to allow them to mount the Shimano Alfine-8 IGH in the high-pivot, so the rear wheel can be very light, and so the final run of chain experiences very little growth of length during a cycle. This frame also has exceptional ground clearance on the chainring, for crawling over significant off-road obstacles. 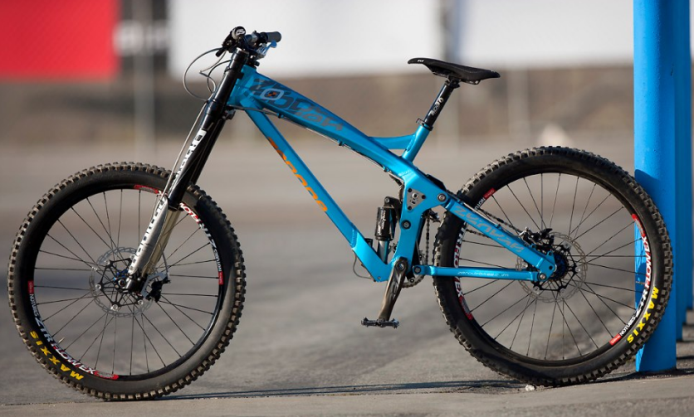 The builder “Ferum” added custom brackets to the complex suspension to mount a Cyclone 750W motor in a way where it drives the shell of the IGH, so…only the pedals have the use of the 8-speeds. He then added an air-fan, so he can shove more amps into it (up to 2000W).  The original build discussion can be found here (Written in Russian, but…the pics are still nice). 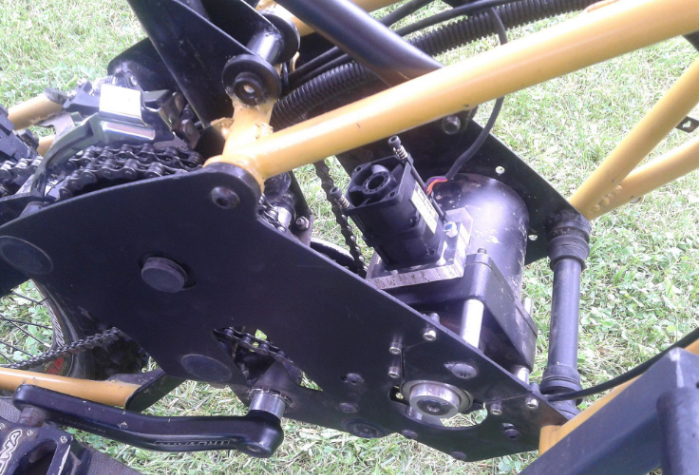 The frame-mounted Cyclone 750W motor, with an added air-fan so it can take over 2000W

One of the first major custom adaptations was to machine a new side cover for the Alfine-8 IGH, that incorporates a custom integral sprocket. The smaller sprocket below is the normal stock input freewheeling driver.

The Alfine-8 Internally Geared Hub (IGH). The sprockets shown are 16T and 25T 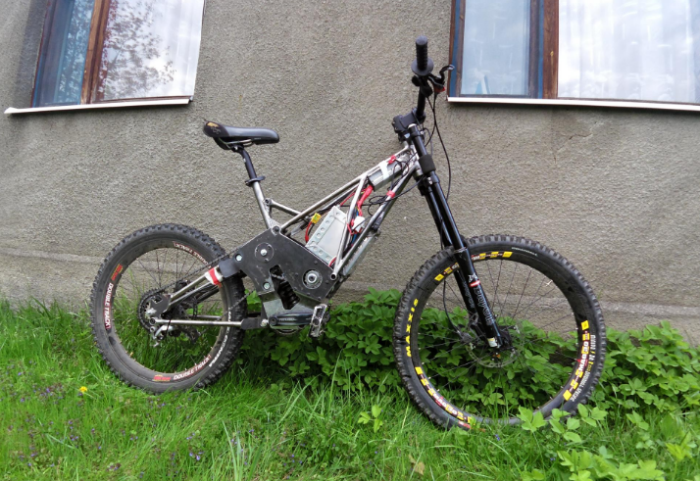 The original muTant in its rough form.

Ferum was happy right away with the results of his efforts, but…he also immediately began thinking of ways to improve this awesome creation even more.

In September (Ceh) of 2015, Ferum started to research his new plan. 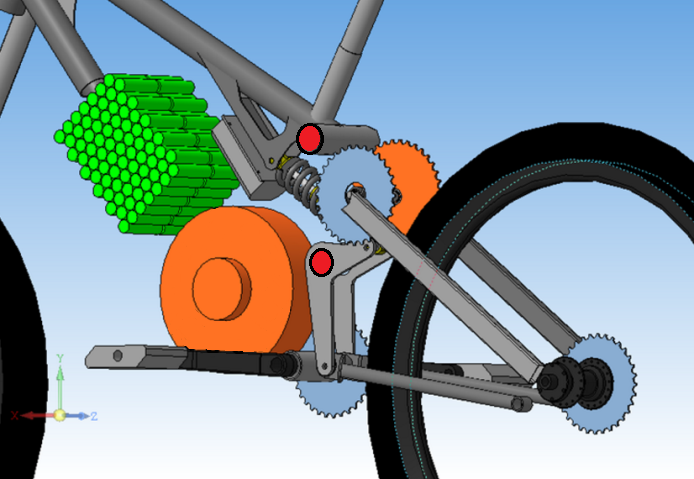 The graphic above might help to understand the Zerode suspension better. The two red circles are the pivot-points. If your body-weight is sitting in the seat and the rear suspension hits a bump, the pedal-spindle moves to the rear, and the rear wheel axle moves up. 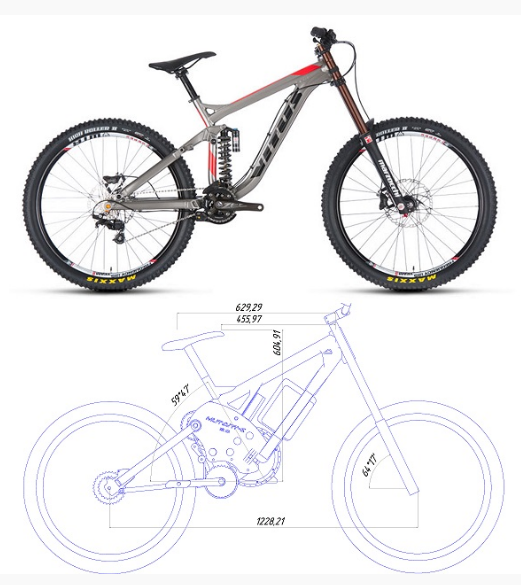 Finding a frame candidate to buy…and then immediately cut into a bunch of pieces!

Ferum used a computer to plot-out the major modifications he wanted to do to a frame for his 2.0 version. Instead of starting with a Zerode, he could use a more affordable frame…since his custom mods would replace most of the Zerodes unusual parts. 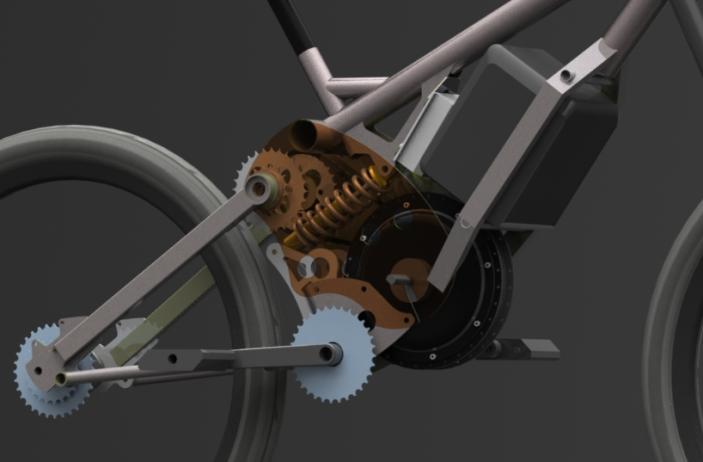 He decided to use a large geared hub with a low Kv, and settled on the MAC 12T, using a 12-FET Kelly controller that is limited to 2500W (52V X 48V). The motor has a solid 22T cog bolted to it. There will be  a jackshaft between the motor and the IGH, and the pedals will also join the drivetrain at the central jackshaft.

Time to cut metal, and fire up the welder!

The first step in this part of the process is to build a jig to hold the frame straight and true, while the custom pieces are cut to fit, and then welded on. 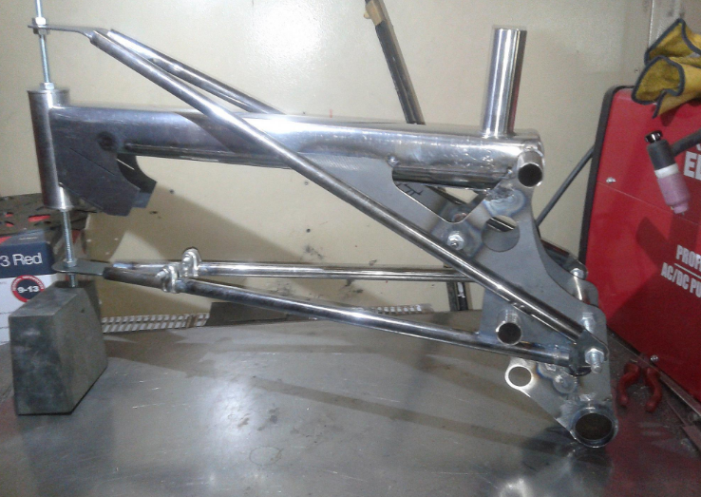 The Vitus frame that donated its life for this project. 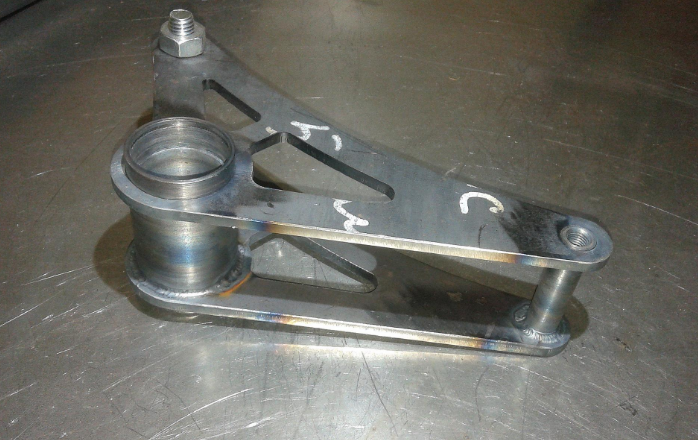 The suspension rocker-arm that holds the jackshaft in the center. 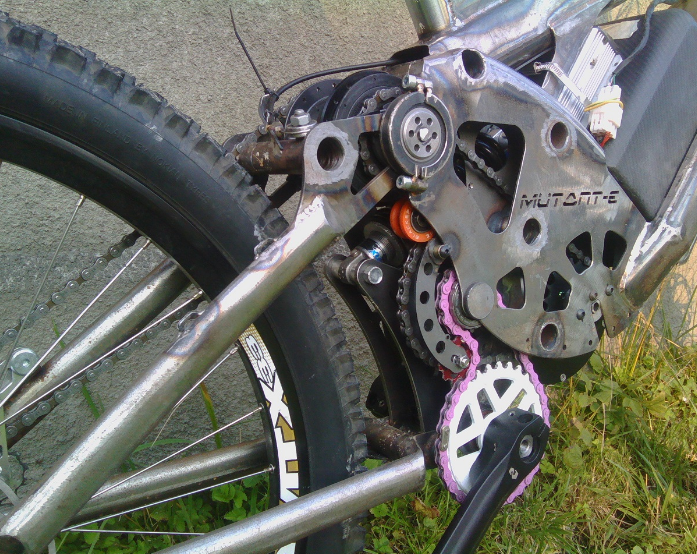 The output sprocket on the Alfine IGH (attached to the shell) has been moved from the right side to the left side (shown here). The rear eye of the shock is attached to the suspension rocker arm that was shown a few pics above.

Only time will tell if the Alfine-8 IGH will hold up to the power he is running through it. The pic shown appears to have the motor (with a non-freewheeling cog) directly driving a chain to the IGH input, while the pedals drive a freewheel on the jackshaft (the pink chain) 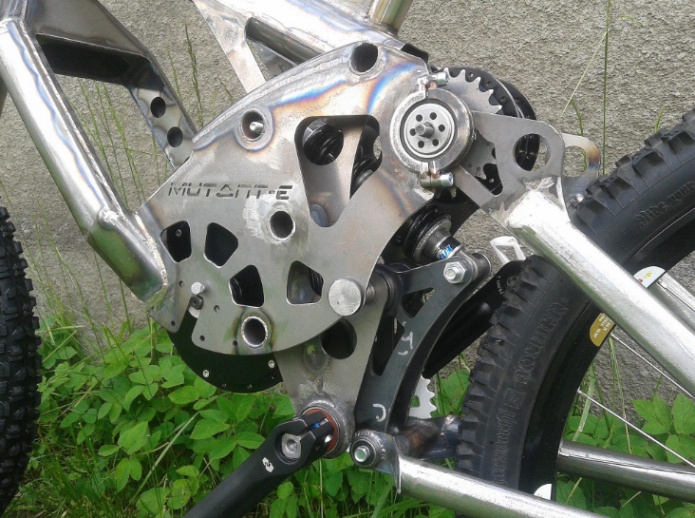 The suspension rocker arm is easier to see in this pic.

In the pic above, you can get a clearer view of the suspension rocker arm shown a few pics above. Its’ frame-mounted central pivot is also the jackshaft. 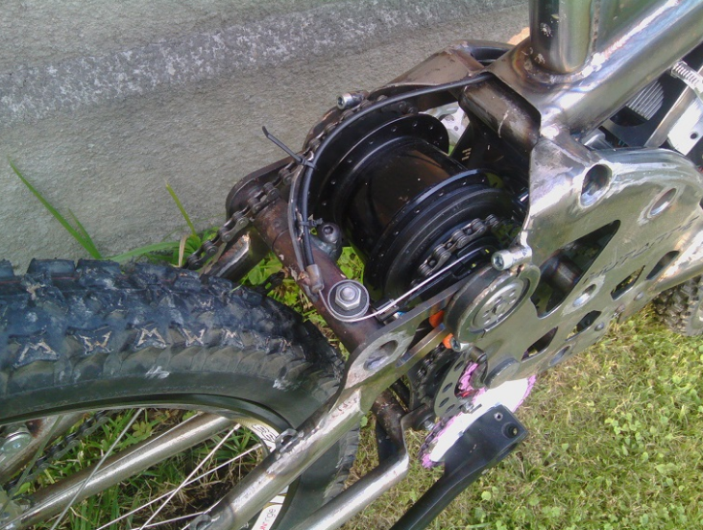 The Alfine-8 IGH mounted inside the top pivot. Input on the right, output on the left. 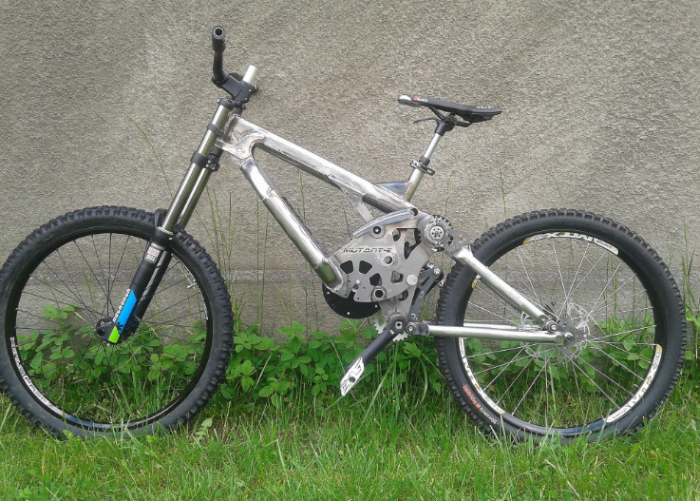 The top speed is 37-MPH (59 km/h) on flat land, but…this ebike is designed to tackle off-road obstacles with a nimble ability. It can also boldly take hard jumps and drops without damage.

In the pic below, you can see the downtube space that will hold the new battery box. 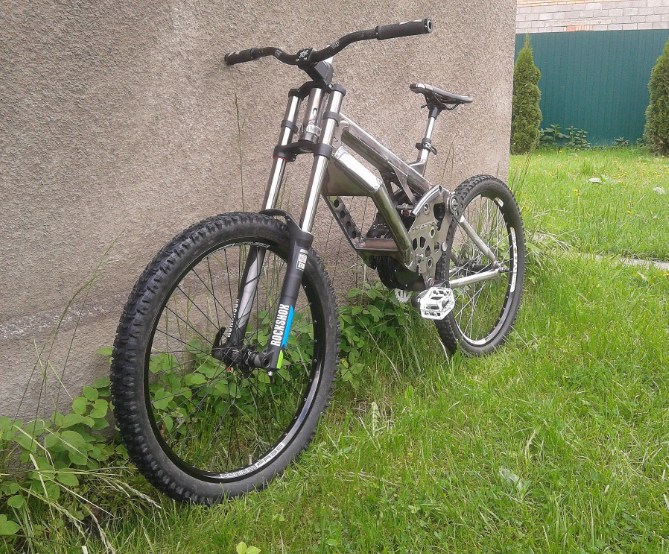 The long-stroke dual-crown Rockshox forks can take a pounding. 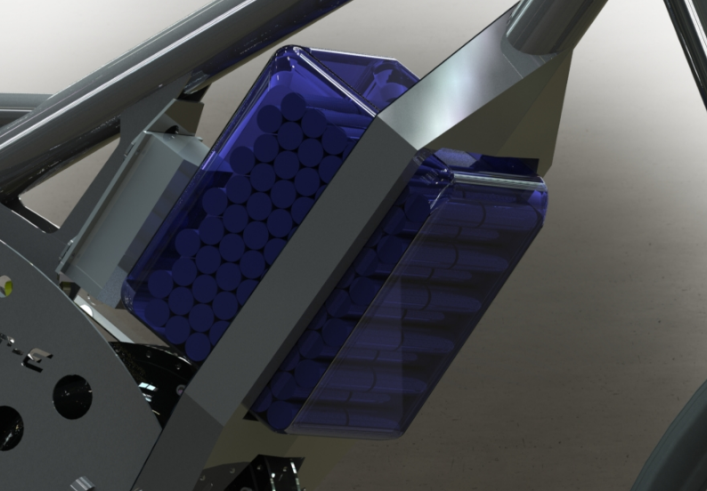 Designing the pack on a computer. 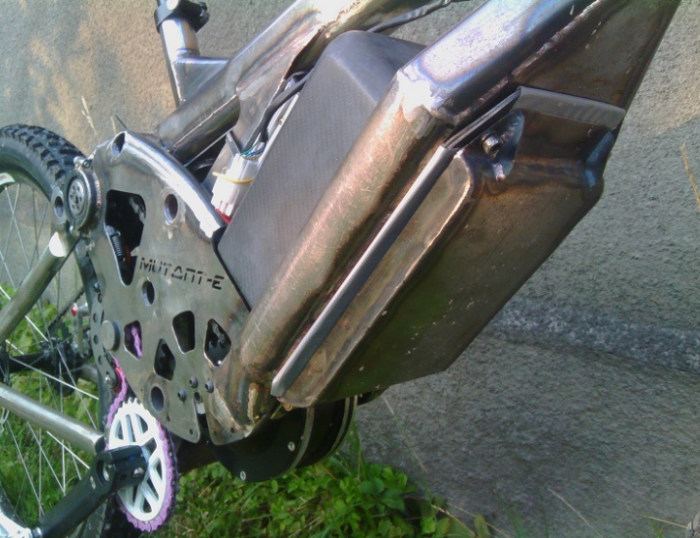 The final form of the battery box.

In the pic above, we can see the rugged non-conducting plastic case, and the tough metal bash-plate to protect it, which also to acts as an access door for removing the pack if needed.

After powder-coating the frame pieces and re-assembling them, the final form is so professional-looking…it is hard to imagine it is a DIY custom. 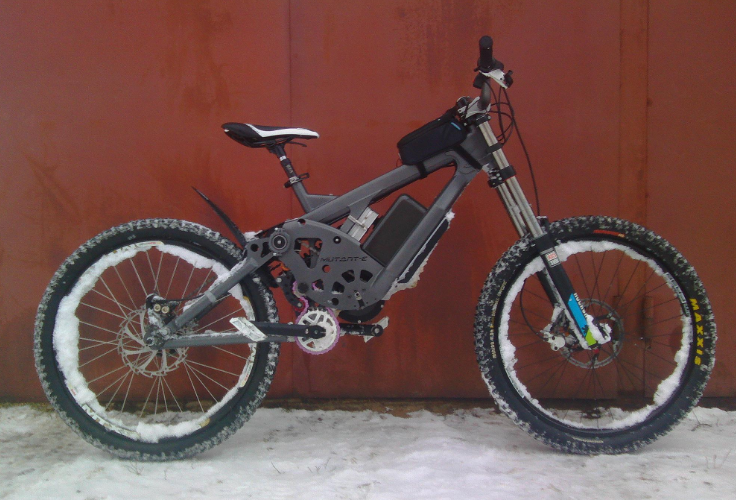 Even after the extensive mods, you can still tell it started out as a robust downhiller

There are several characteristics about a bike frame that distinguish it as a Down-Hill (DH) model. First, the head tube angle is noticeably slack, for those times when you are speeding down a steep hill. A head-tube angle that is more vertical would be more likely to flip you over forwards if you hit a hard bump (called a “faceplant”). The next thing, is how small the chainring is, since you are expected to only be pedaling when you are going up a steep run (and freeride down, with no pedaling). The last major characteristic is that DH frames come from the factory with very significant brakes.

Below is the youtube video that first caught my attention. 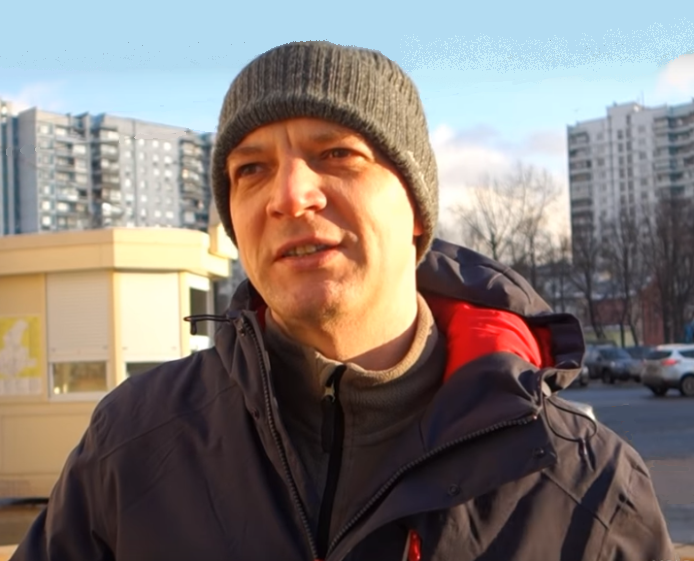 Sergey, the designer and master builder. 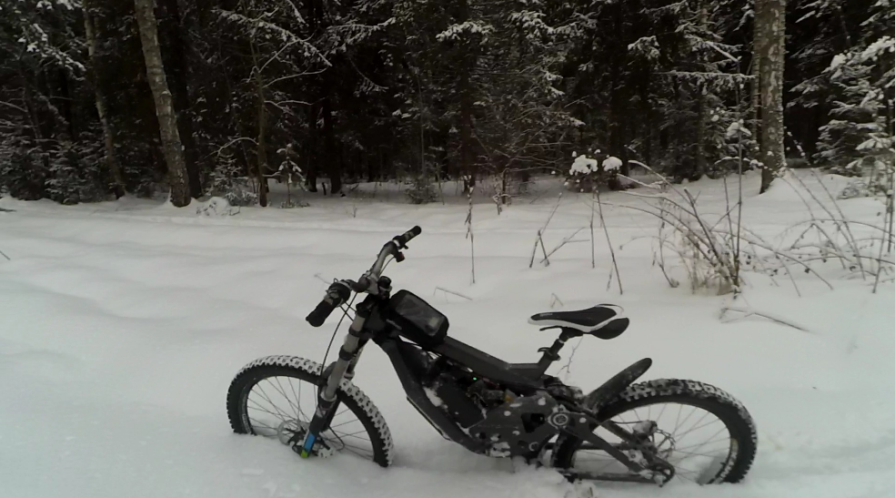 The muTant-E 2.0 in it’s natural habitat, a Russian winter in the forest.

The build-thread for the muTant-E 2.0 in the Russian forum can be found here. I have been trying to find a way to express how wonderful this is, so I’ll just end this article by saying:

All I want for Christmas is...

I feel incredibly blessed to have the life than