Once a year at the North American Handmade Bike Show (NAHBS, in Charlotte, North Carolina)…custom-made one-of-a-kind bicycles are displayed to show off the builders skill, and to present new ideas for consideration.

At last years 2013 show, the master frame-builder Paul Brodie presented a mid-drive to NAHBS that was the first electric bike to ever be shown there. Paul is the highly regarded instructor for a frame-builders course, which is held at the University of Frasier Valley in British Columbia, Canada. As fate would have it, last year one of his students was the E-bike industry pioneer Justin Lemire-Elmore, owner of ebikes.ca 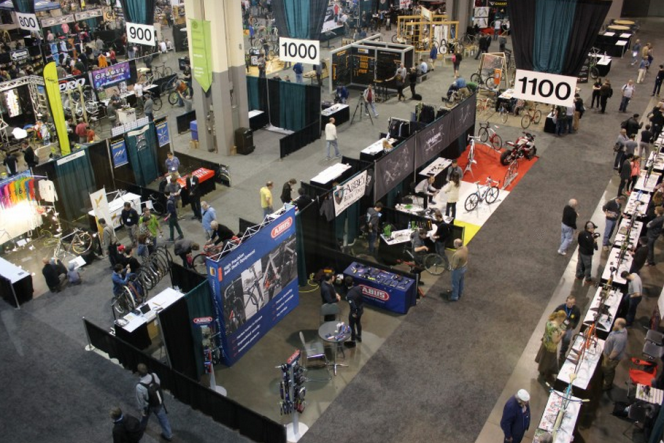 Well, this year…a completely different Paul (Mr Daniels from Ashland, Oregon) presented the second E-bike to ever be shown at a NAHBS event, and it was just as impressive as the previous one. This Paul is already well-known to us, because he put together the winning E-bike that competed at the 2011 Arizona “Death Race“.

Rather than go for max power, Pauls race-bike used a balanced design with a mid-mounted motor driving a left-side chain the the rear wheel. It was light, efficient, and most of all…it was reliable…compared to several more powerful competitors that suffered a melt-down in the middle of the race.

I might be useful to understand that Paul is also an engineer at Brammo electric motorcycles! Pauls new NAHBS E-bike is a mid-drive, and it is configured to allow the motor to use the bikes gears. This is the ultimate configuration if you like to occasionally climb very steep uphills, or if you live where you are restricted to using low-power (like the 250W power limit in Europe).

If you run the motors power through a freewheeling bottom-bracket, a mid-drive motor may require a lot of reduction, so that the motor RPMs will stay up in the most efficient range while keeping the output of the drive near the approximate 80-RPM cadence of the pedals. If Paul had tried to use a single stage for the entire reduction, it may have required a very large custom sprocket, and even then…the largest fittable size of the sprocket would be a limit on what is possible. 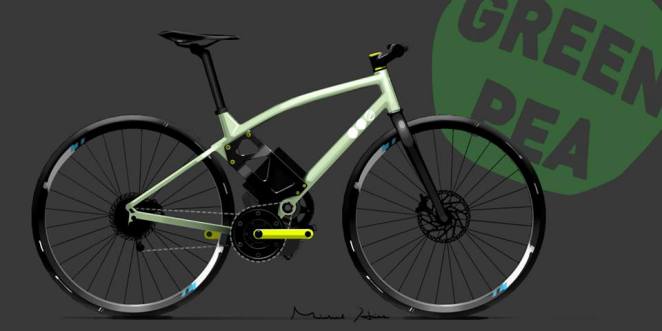 Computer Aided Design (CAD) was used to produce this concept configuration, and this artistic rendering was created by Michael Hritz. This graphic was the inspiration for Paul, who decided that he wanted to make this in real life.

Paul chose a two-stage reduction using a primary belt-drive, and a secondary chain. This style of reduction has been showing up a lot these past two years. By splitting the total RPM reduction into two stages, the primary can be a very quiet belt-drive, but the more highly loaded secondary drive can be a narrow and strong chain.

When the higher-RPM primary has been driven by a chain on other projects, it can produce a lot of noise. And…if the secondary has been tried with a belt, then it becomes the power limit of the drive, and it is also difficult to fit into a BB-drive because of the belt width and the lack of stock pulleys that can be fitted to a BB-crankset.

As it turns out, the belted primary was Paul’s ticket into the event. In spite of the good press that Paul Brodie had generated last year, the NAHBS organizers were reluctant to allow more electric bikes into the event again. Paul Brodie was so well-respected in the custom frame industry, that they couldn’t say no to him last year, but for Paul Daniels…it was fortunate that one of the major sponsors of the event was the Gates corporation, who is promoting their belted drive systems (which are intended to replace the chain to the rear wheel on high-end bicycles).

Paul’s primary belt was part of a motor drive system (instead of a drive-chain replacement), however…that was enough to get the Gates company to lobby on his behalf. The Gates representatives were able to “persuade” NAHBS to allow several electric bike entries with Gates drive belts (some with the famous Bosch drive unit), among the dozens of pedal-bikes using Gates drive-belts.

The motor is a Transmagnetics 4″ diameter unit, and it’s an inrunner (they shed heat well). The stator has 12 poles and the rotor has 8 magnets.

The primary pulleys are 105T / 19T for a 5.5:1 reduction, and the secondary sprockets are 80T / 13T for a 6.1:1 reduction. The total gear reduction from the motor to the crankset is 34:1, and the primary Gates belt is 5mm pitch GT2, 15mm wide. The large 105T pulley started out as an off-the-shelf Karting unit, but it was sliced in half to 17mm wide and the center was modified to fit onto a custom 6-arm spider that attaches the pulley to a flanged freewheel on the jackshaft. The secondary chain is tensioned by an eccentric mount from a tandem parts catalog.

The frame material is 4130 Chrome-Molybdenum steel (CroMoly), which is prized by custom frame builders for several of it’s characteristics. Aluminum frames can develop cracks over time, but Cromoly has a certain amount of “springiness” that allows it to flex. In fact, this entire frame acts a spring of sorts. Certainly not springy enough to be a replacement for suspension, but on a fairly smooth street, a properly shaped CroMoly frame will provide a smoother feel over an aluminum frame, without the extra weight of suspension components. 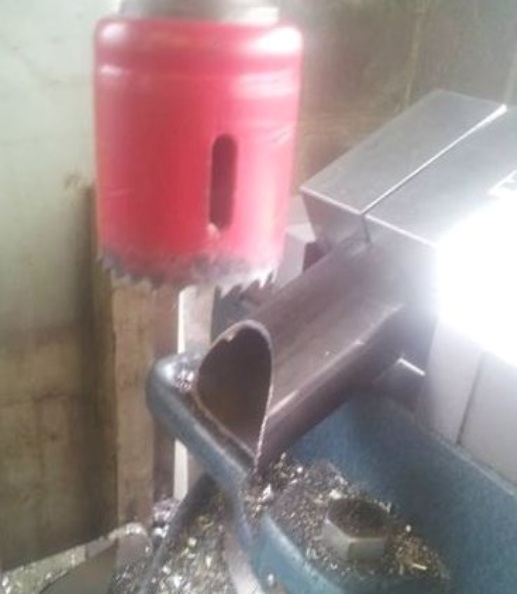 Cutting a “fish-mouth” with a hole-saw in preparation for assembling the frame-tubes onto a jig. 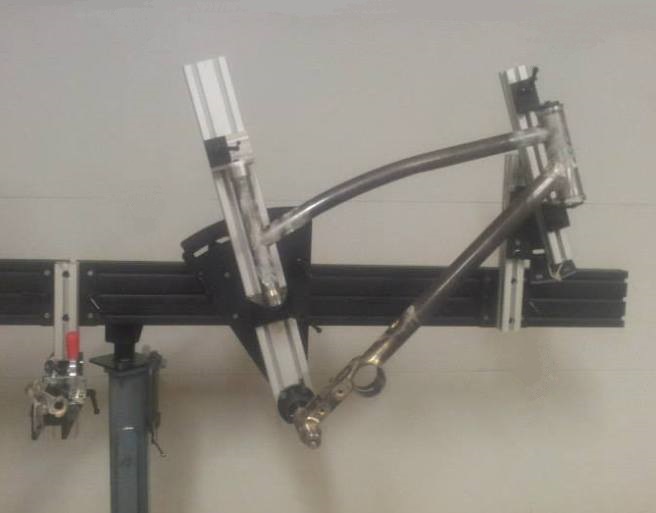 This is a frame-jig. It will hold the frame pieces together in perfect alignment during the brazing process, since the heat from the brazing torch can cause warping and mis-alignment if precautions are not taken. 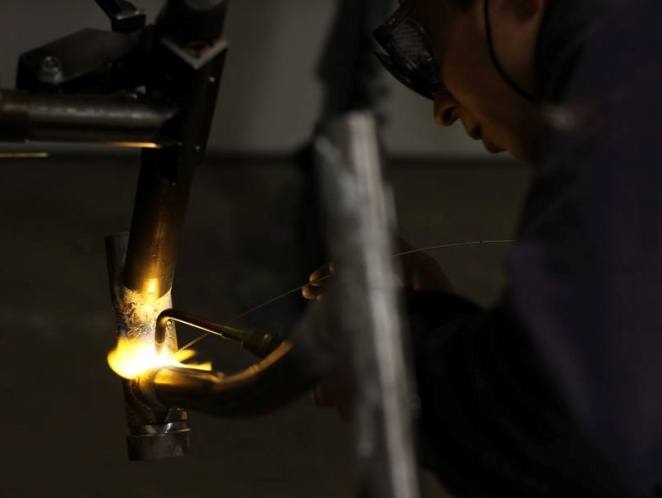 With the frame positioned upside-down, Paul is shown finishing the brazed connection between the top-tube and the head-tube. Brazing with MAPP-gas is cheaper, but the hotter Oxy-Acetylene torch (seen here) is faster. 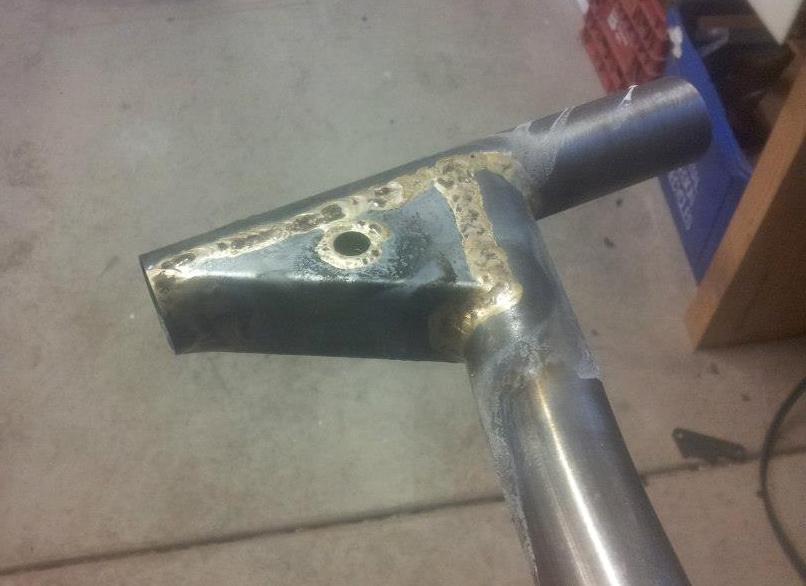 Torch-brazing with C-04 bronze rod is a frequently seen method among custom frame-building artisans. Later, the bronze welds can be sanded perfectly smooth for an incredibly beautiful finish. Brass is also sometimes used for torch-brazing. It is not quite as strong as bronze, but it is easier to smooth-out afterwards. 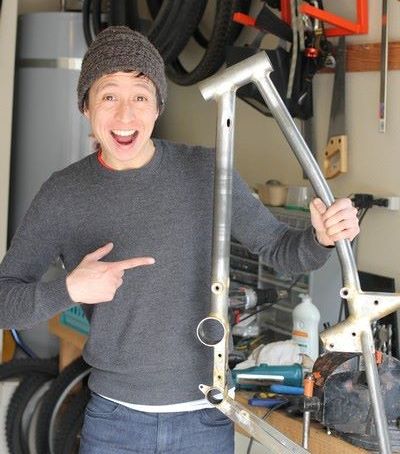 Paul Looks happy with the results! 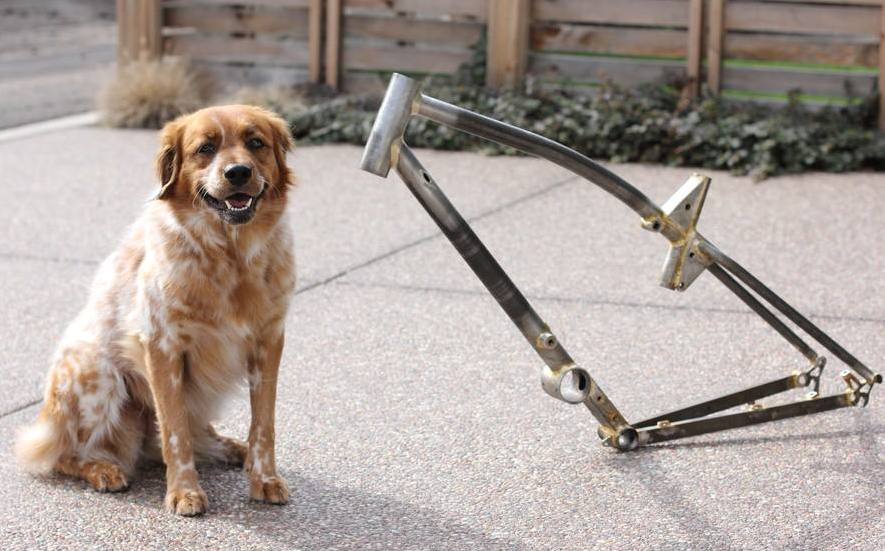 Time to take a break, and stretch a little after contorting his body into odd positions to braze all the pieces together properly. Maybe take his fabrication assistant Molly the dog for a walk, to clear his head before powder-coating? 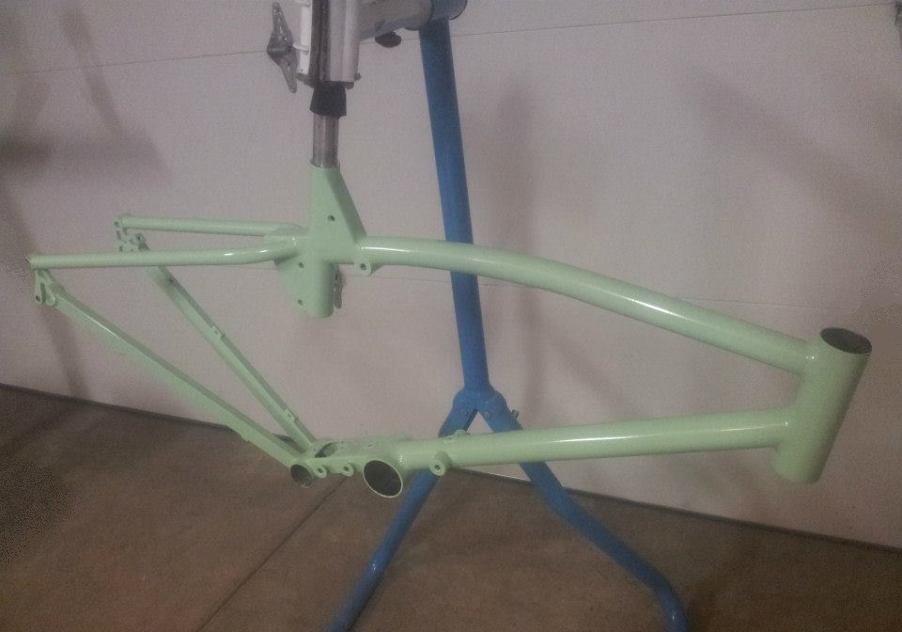 This bike was inspired by the Green Pea Bikes concept, so the color was already decided before the first tube was cut. Since Paul and GPB are both in Ashland Oregon, it was inevitable that they would eventually meet! Powder-coating results in a much tougher finish compared to paint, and this particular shade is RAL-6019. 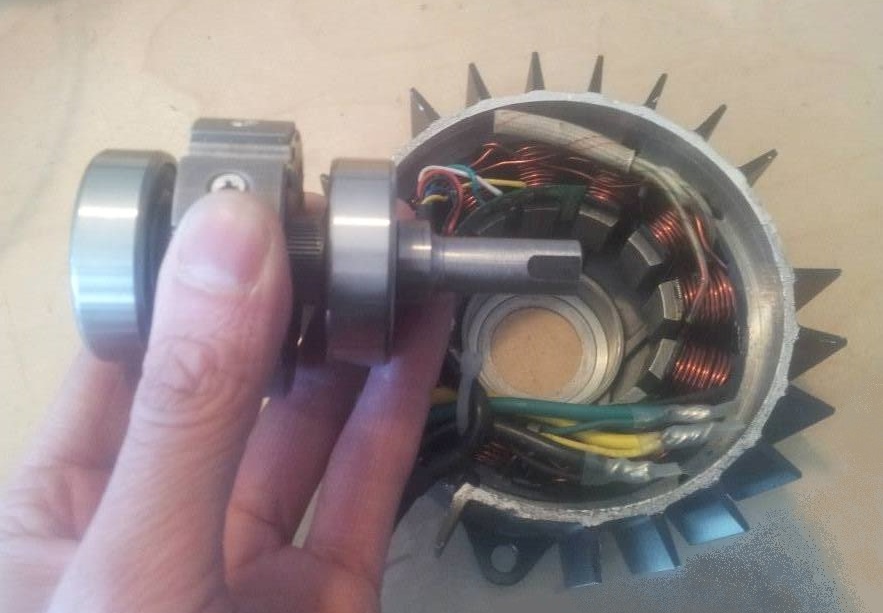 The 4-inch diameter (102mm) brushless DC motor from Transmagnetics. The inrunner rotor is 50mm in diameter (2-inches). The stator uses the desirably thin 0.35mm laminations, 3-phase, 12 poles, and 8 magnets. As we can see from this pic, it also comes with hall sensors.

The 4-inch diameter motor may seem somewhat small, but the Bafang-BBS02 has shown that an inrunner this size at 48V performs quite well at 750W.

Paul has stated that the pack is 48V and 470-Watt-Hours (WH), which calculates out to 9.8-Ah of battery. This may seem small, but this last year has seen a boom in the selection of available high current batteries, which are coming from the cordless tool industry.

The cells were provided by Farasis, whose focus has been electric motorcycle batteries, so these cells are likely to be high-current capable. Even when used in a low-current application, high-current cells will run cooler, which is always a good thing. The Chemistry is the well-regarded Lithium-based NMC.

Paul states the motor is being run at 48V and a power level of 750W (the US street-legal power limit), so… 750 / 48 = a mere 16A. This means that if you use high-current cells, and only draw 16A at a maximum…even a battery pack this small will never get hot. 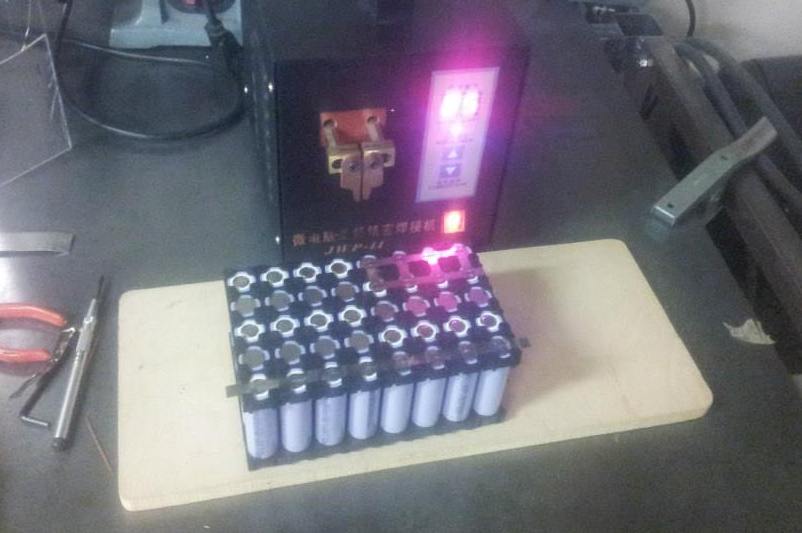 Spot-welding the nickel strips that connect the 18650 cylindrical cells in to series and parallel groups. These 40 cells were initially configured to 10S / 4P (36V). After mounting, Paul felt a larger pack would still fit well, so he made a new pack at 13S / 4P. 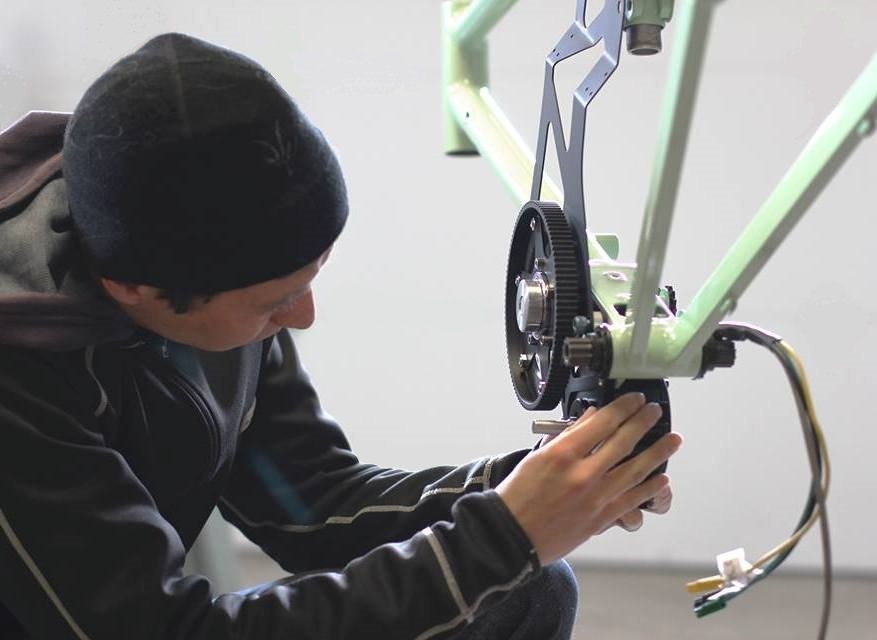 The final fitting of all the parts…no time to rest! Paul reports that the final two weeks leading up to NAHBS he was only getting four hours of sleep per night in order to make sure that everything was as perfect as it could be. I think the Gates people must be impressed, and certainly the NAHBS people have a better opinion of E-bikes now… 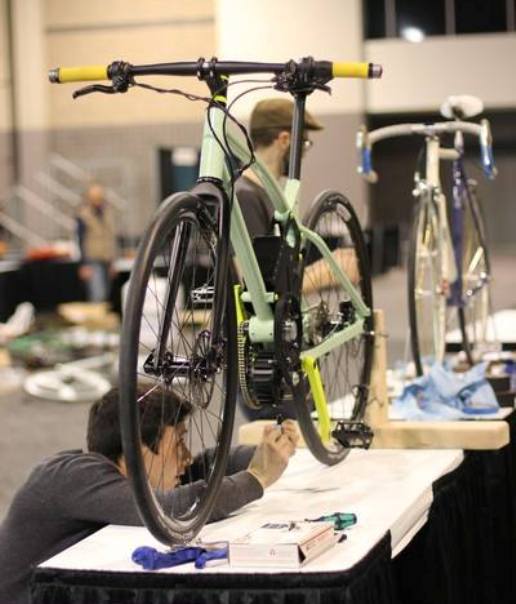 Making sure every detail is just right for the NAHBS display, just before the doors open! 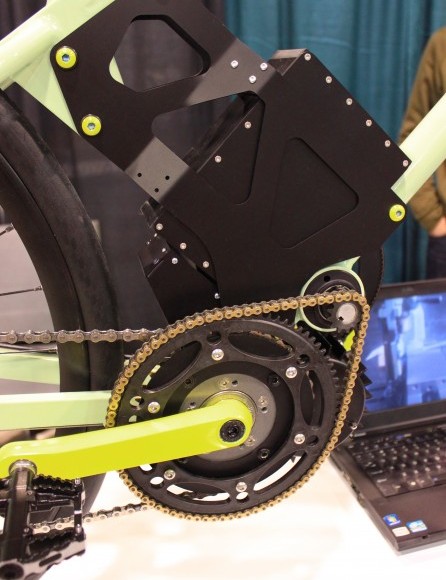 I must mention that this design is not just a hastily-sketched napkin drawing, made over lunch, that has been brought to life. I have seen too many concept bikes with a stub seat-post above the top-tube, which have no reinforcing gussets…and made just for the sake of creating an artistic “look“. Normally that is bad engineering, even if it does free up the space under the seat to give the motor-drive engineer more freedom.

However…the seat-tube stub in this design is heavily gusseted above and below, and the battery-housing side-plates are structural members, which adds support while still being fairly light. Although the motor-drive resembles a very professional version of the GNG or the BBS02, it is this frame solution that is a truly new idea. (also, the seat-tube stub is short enough that this frame can easily accept a suspension seat post)

We have been very vocal in encouraging the E-bike industry to increase the availability of optional triangle battery shapes. But…this frame sets a new standard for those who wish to design an E-bike specific frame from the ground up. The tidy 470-WH pack is perfectly situated for locating it’s weight. And it’s small size is acceptable for the average one-way commute of most E-bikers.

But…for those who are willing to pay for a larger battery, this frame easily accepts two of the stock battery packs for a 48V / 19.6-Ah pack! It would be more appropriate to provide an optional larger battery that is only half-again as large as the stock pack…somewhere near the size of 14-Ah, but it is nice to know that the frame is not the limit on the size of the battery you could add, and the battery pack options would be the common rectangle-shape (with lots of options available right now).

Here is the home page of Green Pea Bikes.