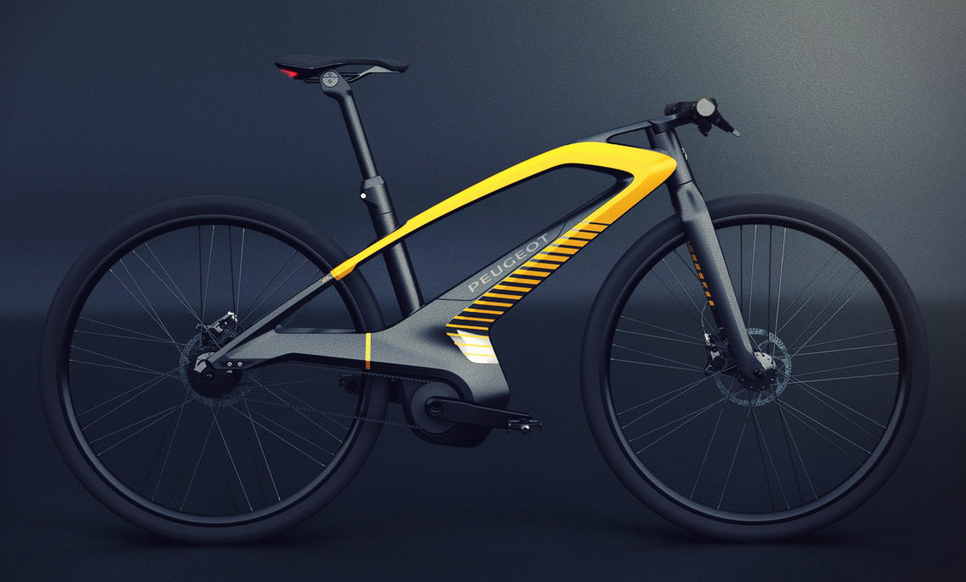 The Peugeot eDL-132 mid-drive electric bicycle is a gorgeous example of a car company that wants to get some publicity with the growing trend of cars and motorcycles adding an electric-drive to their model line. Over the past decade, it has been rare for me to see any evidence of a Peugeot outside of France and the European Union (EU), but two years ago, the French company Peugeot decided to start making some bold moves, which would be needed if they were to begin developing exports in order to grow their business.

In 1810, the Peugeot family converted the water-driven mill in Sous-Cratet into a steel foundry (in Doubs County, Eastern France, on the Swiss border). They manufactured a variety of products, and in 1882, Armand Peugeot designed the “Grand Bi” model of “Penny farthing” bicycle (with 51-inch diameter front wheel), which became known for its quality, and it was well-received by the cycling public. (The Frenchman Eugene Mayer has been credited with the invention of the “high-wheel” style of bicycle in 1869). 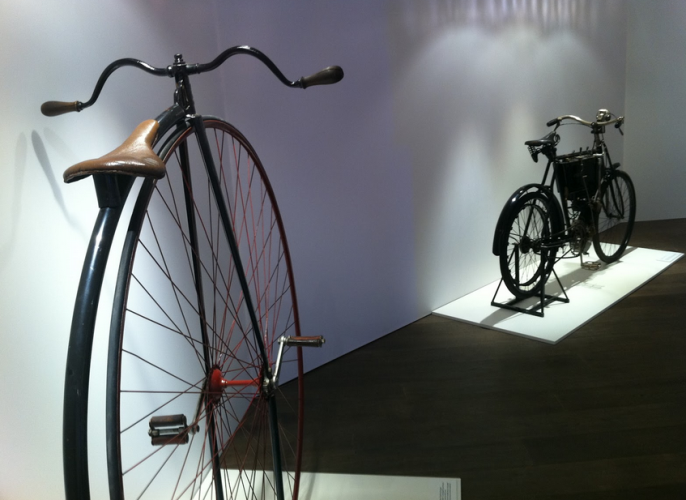 In the Peugeot Museum, the Grand Bi (Large Two) is shown here on the left, and the bicycle on the right is a Pre-WWII Peugeot with a tiny one-cylinder gasoline engine.

Peugeot began manufacturing bicycles late in the new “highwheeler” trend, and only four years later they switched to manufacturing a “safety” style of bicycle. The new safety bicycles were patented by the British inventor John Starley in 1884, and they became immediately popular. This transformed the bicycle and was the birth of the explosion in the bicycle as a realistic means of affordable transportation. 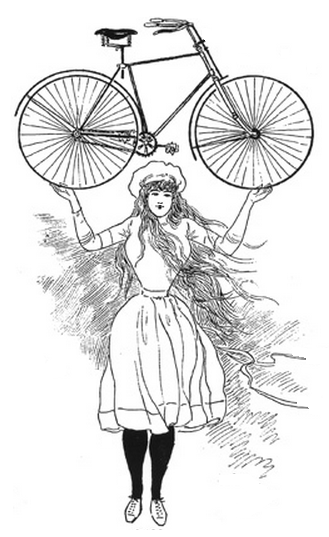 Here is an ad for “La Petite Reine”, the Peugeot version of the milestone “safety” bicycle configuration.

The populations of the major countries in the 1890’s were much smaller than today, and yet Peugeot was selling over 10,000 bicycles per year. Cars would not become affordable to the common person until at least 20 years into the future, so this was the golden age of the “bicycle craze”.

In 1889, the Peugeot company built a steam-powered 3-wheeled automobile prototype. The next year they switched their production cars to the new gasoline engine, and by 1892 they had sold over 30 automobiles. By 1900, Peugeot had firmly established itself as a car and bicycle producer. 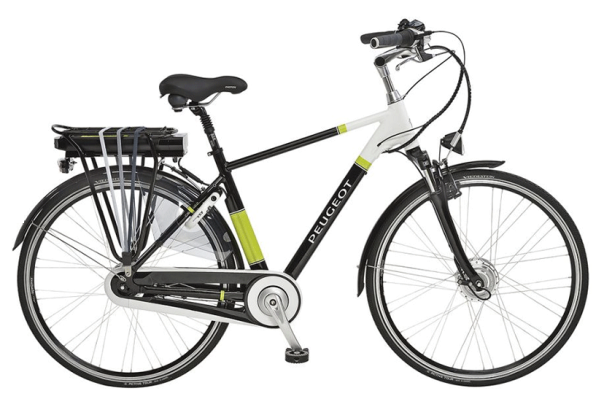 Here is Peugeots first production E-bike, from just a few years ago.  Due to the  modest 250W power limit in the European Union (EU), it only required a small front geared-hub, and the battery and controller are mounted on the rear cargo rack. These components were easily fitted to one of their common production bicycle frames. This popular commuter model has a fully-enclosed chain, and a factory-mounted rear wheel lock, which prevents the rear wheel from being pedaled. 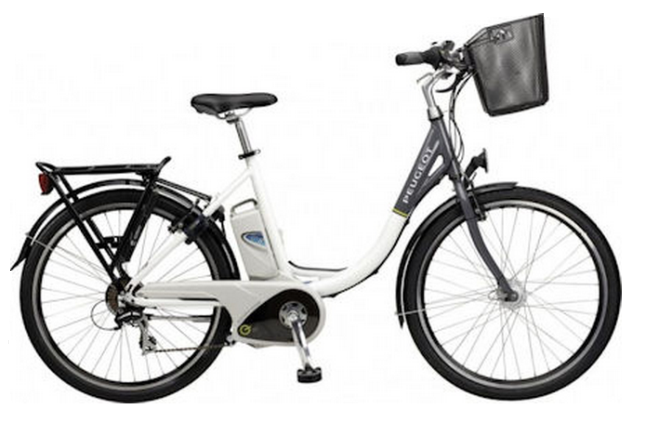 Recently, there has been competition from other mid drive E-bike models that were available from other EU companies. This has  encouraged Peugeot to design a factory-built E-bike with a mid drive motor. By giving the motor the ability to use the bikes gears, the modest 250W legal power system can climb hills much easier. 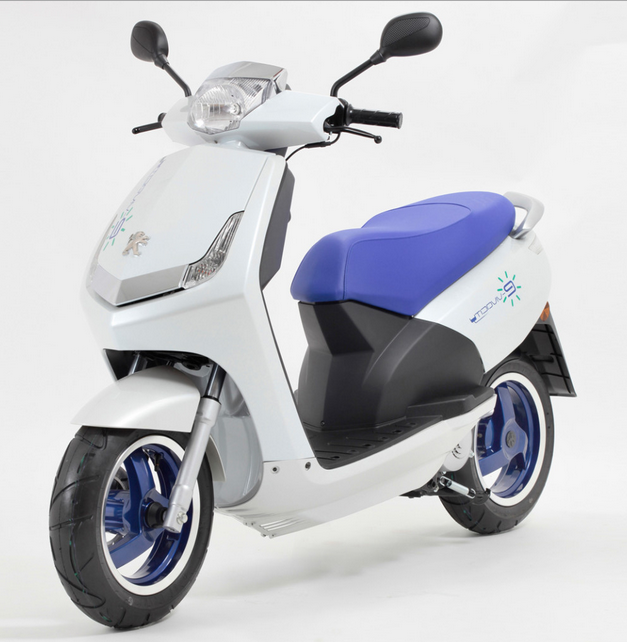 Peugeot has been a major supplier of small gasoline scooters from the time that gasoline engines were first invented, and the 2010 eVivacity was their first electric scooter.

Over the decades, The Peugeot company has remained well-known for transportation products, such as their cars, scooters, and bicycles. Their fortunes have cycled with the ups and down of history, but they managed to survive. The 1970’s were very difficult for the other French car firm, Citroen. The Citroen company had been long revered for its design innovation (like the Citroen DS automobile), but struggled to earn profits. In 1974, the creative and artistic Citroen merged with Peugeot, the business survivor.

In 2010, Peugeot decided that in order to grow, it needed exciting designs and innovative modern products. They created the Peugeot Design Lab with an influx of the best staff members from their Citroen division. They then made a huge investment in creating several electric and hybrid vehicle designs. 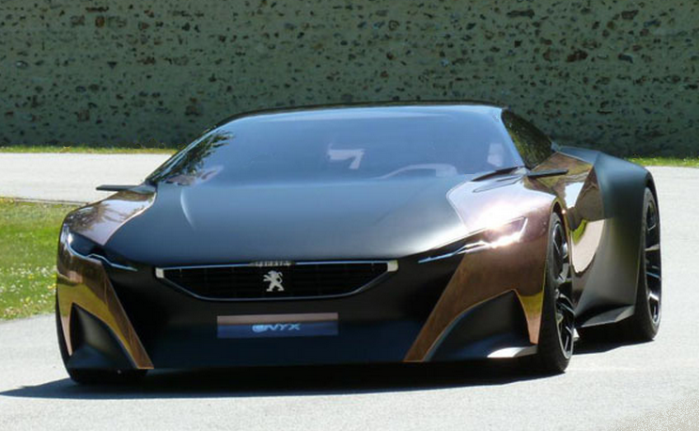 The Onyx diesel-hybrid sports car, from the Peugeot Design Lab.

The Onyx diesel hybrid sports car couples a very compact 3.7L V8 turbo-diesel engine with an electric motor and a lithium battery. The motor adds 80-HP whenever the driver accelerates, and during any cruise-phase, the small diesel gets exceptional fuel economy. The sleek aerodynamics and low weight of 2400-lbs (1,090-kg) work together to aid both the fuel economy and performance. 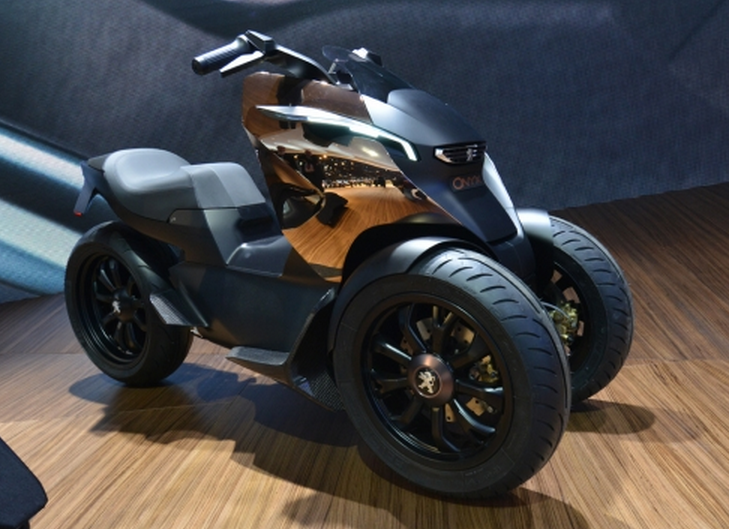 This bold 3-wheel motorcycle is also a hybrid that couples a 400cc single-cylinder gasoline engine to an E-drive, using a compact and light lithium battery pack. Like the sports car, this Onyx scooter uses the electric motor only during acceleration in order to give the modest 400cc engine the performance of a much larger engine, while still providing the fuel economy and emissions of the smaller engine. This exotic Onyx concept was designed alongside Peugeots conventional 400i 3-wheel scooter, which was a response to the popularity of Piaggios 3-wheeled “tadpole“-configuration MP3 scooter. 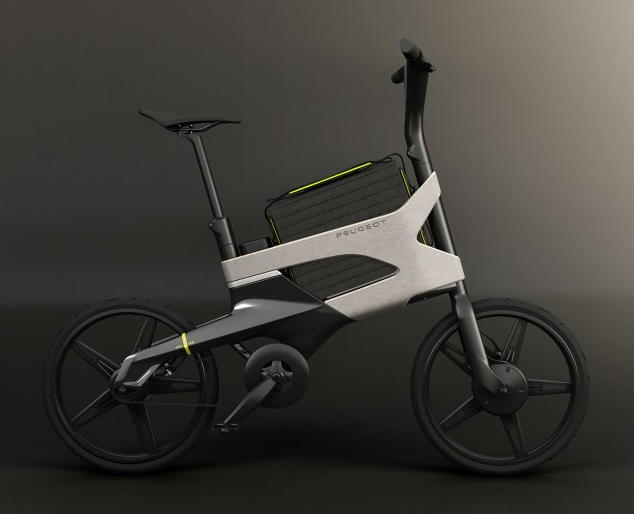 The AE-21, which is the production version of the Onyx eDL-122 concept E-bike, designed for commuters.

The eDL-122 is the very elegant Peugeot Design Lab concept bike that was shown at the 2012 Paris Motor show. Peugeot has decided to actually go into production with this, and the result is their chic AE-21 city-bike. Whether you choose the pedal-only version, or the electric…the aluminum briefcase does not hold any batteries, but serves as a form-fitted article of luggage (for a laptop computer?) which adds convenience for the business-minded bicyclist.

The handlebars fold for transportation or storage, and the pedals also fold. The very light carbon-fiber frame (23-kg / 50-lb) makes it reasonably easy to carry this bike onto the train, for commuters. The chain is fully enclosed, and it  drives a Shimano 3-speed rear hub, with an enclosed roller-brake on the rear, with a disc-brake on the front.

The EU-compliant 250W / 36V system uses a tiny front-wheel geared hub-motor, and the tiny 9.3-Ah lithium battery pack is located just in front of the seat-tube. The tires are Moiree Vredestein 20 X 1.75

There is no throttle version, and this E-bike uses the common EU pedelec sensor, so only pedaling adds power. The tiny 7A controller uses bluetooth connectivity to allow your smart-phone to act as the bikes computer,  data-logger, GPS, and map-tool. The handlebars include a USB charging port to keep your smart-phone fully charged.

The high cost of developing their diesel-electric hybrid car, and also their gasoline-electric hybrid scooter shows that…Peugeot is very serious about becoming a survivor in the growing alternative vehicles field.

Its almost a given that in recent years, any large automotive manufacturer has developed an electric bicycle (or soon will), if only for the publicity it generates. On the one hand, this means that a lot of money can be spent on a prestige design that will represent the marque, therefore…it will likely be impressive and perhaps even cutting-edge. On the other hand, there have already been several impressive prototype e-bikes designed, and yet…they never seem to go into production.

Our web-tracking shows that one of the most popular exotic E-bikes from a car manufacturer has been the stunning example from Audi. I feel that this example from Peugeot is just as remarkable, almost as much for its features as well as its looks. There are many details, but the main points are that it has a very modern, light, and strong frame made from carbon-fiber. It also has a mid-drive system that lets the motor use the gears on the bicycle. Plus, the rear wheel has an Alfine 11-speed hub, and it uses the exotic Di2 electronic auto-shifter.

This view shows the computer that is integrated into the sleek handlebars. 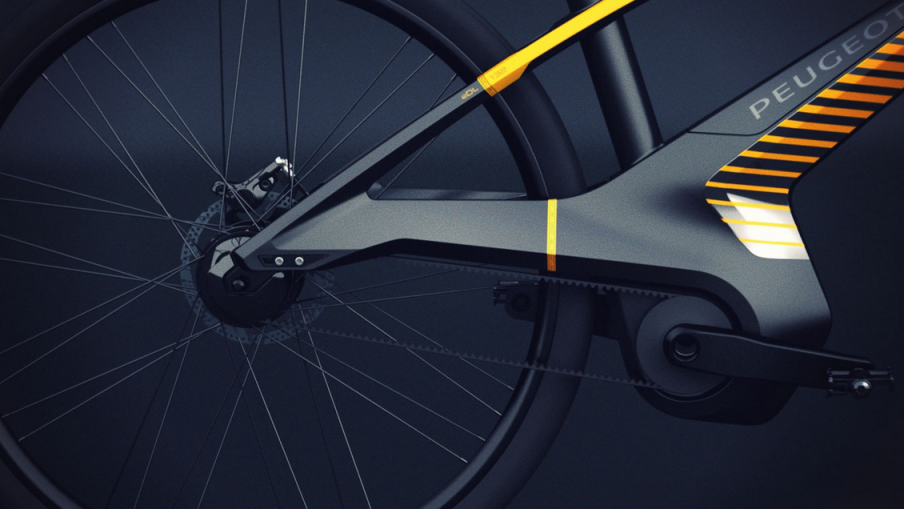 Here, we can see the quiet-running and clean Gates carbon belt-drive. The elevated stay means the frame does not need a break in the stay that would then need to be un-bolted to replace the one-piece belt. 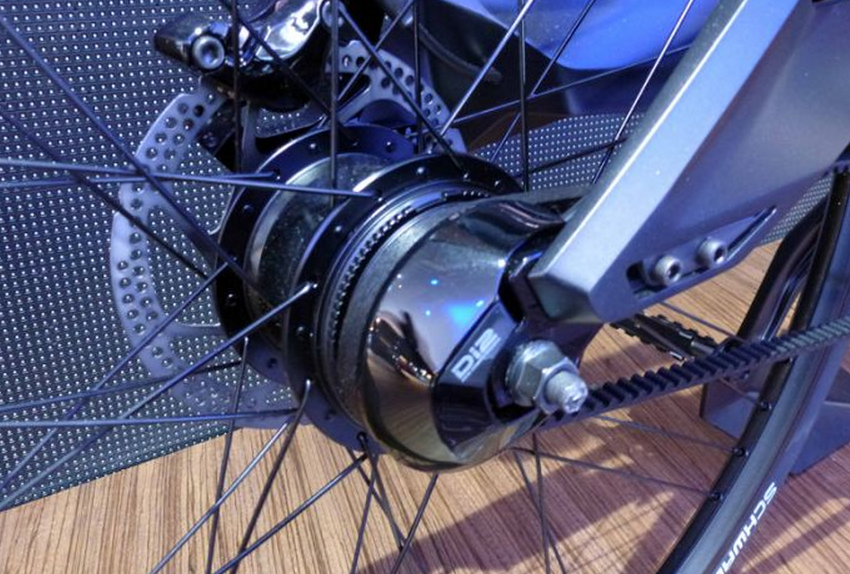 The Rear hub is a Shimano Alfine 11-speed, and the advanced Di2 shifting system senses the load an automatically chooses the proper gear. The brakes are both hydraulic discs, and the tires are Schwalbe Kojaks. With the added electric power, 11 speeds should be enough for any terrain.