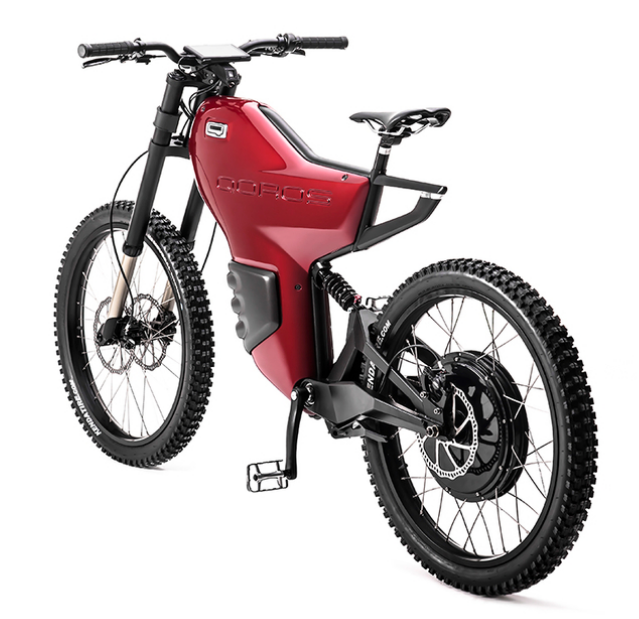 Qoros has revealed a new high-performance electric bike, and if it looks vaguely similar to the GreyP G-12, there is a reason for that. We haven’t had a chance to write about the GreyP E-bike yet, but the eBIQE is breaking news right now (that is related to the GreyP), so we will tell you about the eBIQE first.

We wrote about the Greyborg Warp Builder’s frame kit a few months ago, and during that research, we became familiar with the new electric car company Rimac Automobili. It was started by a brilliant young man from Croatia named Mate Rimac. At one point, they hired a mechanical engineer who was a passionate enthusiast about electric bikes…Zvonimir Sučić.

Zvonimir’s enthusiasm is infectious, and soon Mate became interested in developing a complete “turn key” electric bicycle with similarities to the Greyborg, but with some features that Mate felt would make the resulting E-bike a complimentary partner to Rimac Automobili’s main project, a very exciting electric sports car called the Concept-One. The new electric bike from Rimac is the GreyP G-12. 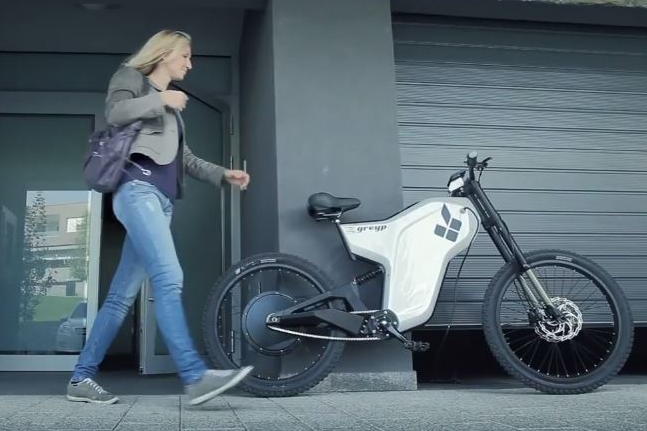 The many similarities between the GreyP and the Qoros eBIQE are fairly easy to see.

Qoros is a joint business venture between two companies, with one in China and the other from Israel. The first Foreign sales for their Qoros-3 gasoline-powered car last year were through their new European dealer, in Slovakia…which is right next to Croatia.

Once Qoros announced that they would develop an all-electric version of their car, it was almost inevitable that the main people from Qoros and Rimac would meet. At some point, Qoros decided to hire Rimac (with their chief engineer Zvonimir) to develop an E-bike for Qoros. If you look at the two bikes side-by-side, their shared DNA is unmistakable, but the details of the eBIQE clearly set it apart as its own product.

Qoros is a new car company, but it is a spin-off from the well-established Chinese automobile firm Chery, and the Qoros factory is located in Changshu (very close to Shanghai, where Qoros has their engineering center).

This attractive 4-door hatchback was designed by Gert Hildebrand, the Executive Director of Design for BMW’s Mini. The hybrid drivetrain and also the all-electric drivetrain that will both be options on the Qoros 3 were designed by the Detroit firm American Axle & Manufacturing, which formed their new electrical drives division in 2010, named e-AAM.

e-AAM was formed as a partnership between AAM and the Swedish firm Svenska Aeroplan Aktie Bolaget, better known as Saab. This was due to Saab’s expertise in AWD electronic management systems. These drivetrains are designed around a family of motors that have differing lengths, but share the same diameter and laminations, which simplifies its adoption across several models with varied power requirements.

Here is the eBIQE and the Qoros 3

This pic of a white eBIQE is from the Geneva Auto show, March 6, 2014. The disc behind it is one of the optional wheel designs for the Qoros 3 automobile. I don’t know how serious Qoros is about making and selling the eBIQE to the public, or…if it is just a handful being branded to help create advertising for their hybrid and electric cars. 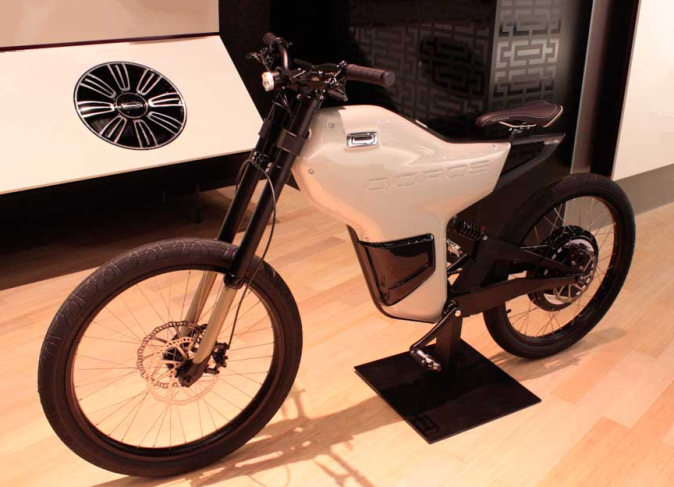 The eBIQE, in white with black trim. 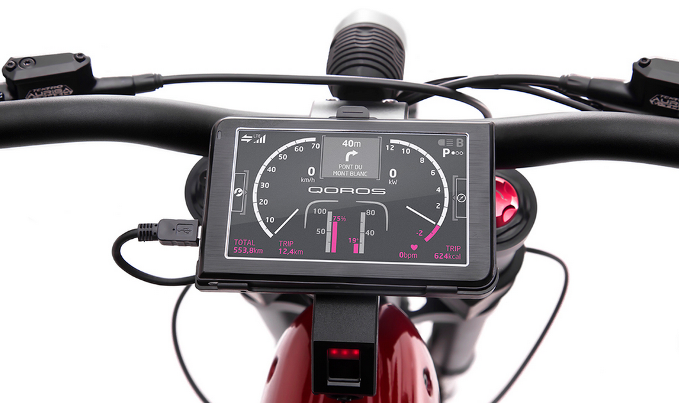 The eBIQE’s touch-screen has several read-outs and menus. This is the standard speed and power consumption display. Among the options is a GPS map guiding system, and it can also monitor your heart-rate if you want.

The two most distinct features on the eBIQE that identify it apart from the GreyP are the very sleek and stylish side-panels, and the LED tail-light framework, which is also very attractive. They both share the sculpted swingarm that exposes the connecting strand of DNA that they share. 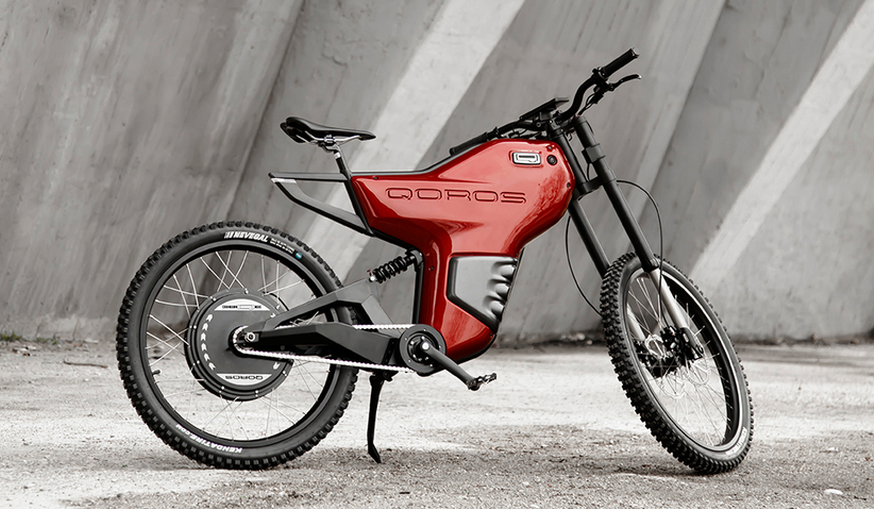 The eBIQE, in maroon and charcoal grey.

Some commentators have repeated a common theme by saying that this is just one more electric motorcycle with pedals, but…A company spokesman was quoted as stating “There are over 130 million e-bikes in China, where several major cities have already restricted the use of gasoline motorbikes or have banned them completely”, so Qoros is hopeful that early sales will justify an expansion of production.

The large direct-drive hub motor uses regenerative braking (“regen“), where the act of slowing down returns some power to the battery. In an E-bike of this weight class, regen should work well, and it will reduce the heat load on the stock 3-disc braking system.

The dual front disc brakes are units adapted from mountain bikes in order to save some weight, rather than a heavier single motorcycle disc system. The efforts towards weight-savings are further shown by their selection of hand-laminated carbon fiber for the body panels. 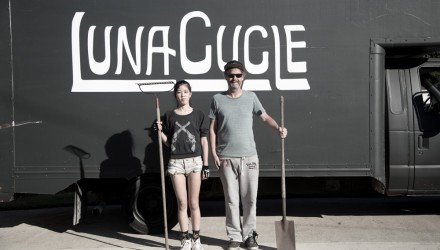 Luna Cycle Comes out of Closet

Who is Lunacycle.com? First read this unbiased review on luna written by the excellent reviewer Karl at electic-fatbike.com   By the way Karl and I are friends now

Here is an electric bike made from the frame

Editor note: The following review is a repost of

The website “Overvolted.com” is one of the sources of