The ebike industry has not had many good Youtube videos to speak of…Much of that is because very few ebikes are designed with the performance market in mind. Performance is what looks good on Youtube. It would be hard to convey how cool it is to ride 20-MPH for 50 miles via an internet video (*yawn…).  That is sad because one good video can transform an obscure activity (like ebiking) into an instant mainstream hit, which is what many ebikers have been waiting for. Stealth is one of the few ebike companies focused on performance.

The Stealth Bomber has all the makings of an epic video. A fast (50-MPH) electric bike,  the most heavy duty off road suspension of any electric bike on the market, a world-class sponsored rider  (Ronnie Renner), and a rare company focus on performance and speed. However, although Stealth ebike videos have been good, there have been no real stand outs…

This video has all the making to go viral and is probably the most exciting production electric bike video I have seen.  In its first day of being live it has already gotten 30,000 views.

One thing I like about the Stealth company is they don’t inflate their performance numbers, and they let the product sell itself. In the these videos, Ronnie is humble about the bikes, and does a great job of emphasizing their benefits over the ultra powerful gas bikes he is accustomed to.

It is not cheap to make a performance bike such as the Stealth, and it comes at more costs than just financial (read our high cost of  ebike speed ). One of the biggest drawbacks of speed on an ebike is it equates to a heavy bike. It is no secret that the Stealth Bomber is not only the fastest production bike available, but also one of the   heaviest at 125 pounds. Much of that weight is in the rear wheel which contains a 28-pound Crystalite hub motor. As fast as the Stealth Bomber is, it is not as agile as a bicycle, a typical ebike, or even an off-road motorcycle which is perfectly balanced. Therefore it is laborious and difficult to do awe-inspiring tricks on it that are worthy of YouTube. However for something to blast through trails quietly and stealthily at a 50-MPH speed, the Stealth Bomber is unrivaled by any powered bike or motorcycle.

I saw Ronnie in Las Vegas at Innerbike riding his  brand new white Stealth Bomber and it seemed like he was getting accustomed to wheelying his heavy beast. This is about as high as he would get it up. But when else could a 50-MPH vehicle be allowed to ride indoors in the Las Vegas convention center?

In Ronnie’s  first video, an introduction to him and his Stealth Bomber, you can see it is kind of skimpy in terms of tricky bike maneuvers, although very good in production quality etc. You don’t see many extreme manuevers in this video…but more of enjoyable trail riding behind the house without pissing off the neighbors. The trick that Stealth seems to be focusing on is riding a high performance vehicle where no other can ride:

If you want to see what Ronnie Renner is capable of,  watch on the electric KLM motorcycle on which he seems  more in his element. Of course an electric motorcycle like the KLM or the Zero are going to have better balance with a mid drive motor with twice the horsepower of any production bike. Again this power comes at the expense of weight  and the KLM electric motorcycle weighs in at 200 pounds (Stealth weighs 125 pounds).

Actually most buyers of the Stealth Bomber will probably do most of their riding in the street (something you would not get away with on an electric motorycle)…which is technically  illegal (the Stealth Bomber is at the top of our list of Illegal ebikes in 2013). However you can always dial your Cycle Analyst down to “Legal Mode”, and ride at 20-MPH and you can at least  argue that you are legal, and you probably will not be hassled if you ride civilly and that is because of the pedals (I am an electric biker!).  Here is a video of a Stealth Bomber street riding in Columbia like a bat out of hell. Lucky Columbia is known for its lawfulness:

Stealth USA did a number of good quality videos of a Stealth Bomber that was off-road riding in its legal habitat. Stealth is well on their way to defining a new category of electric bike…which is a high performance off-road machine that can be ridden on more trails because of its silence and pedals than a gas powered MX bike.  Here is a good example and their most recent video (shot in Canada):

With such an enticing marketing ploy as a viral video, one must ask what Stealth success would mean to the industry.

Riding in SF lately, I have seen two Stealth Bombers in the wild (on bike lanes). Will it be good or bad for the ebike market if bikes like the Stealth Bomber become more popular? Please share your feelings in the comment section, I know it is a hot issue. Personally I really like the Stealth product and like how they are presenting it. It is good to see a non China-made electric bike kicking ass and demonstrating what good technology in an ebike can do.

The speed and performance will attract a younger demographic to ebikes that normally would not be interested. Does spending big money on a 20-MPH electric bike make good sense over buying a simple and affordable 20-MPH pedal bike?  To a 25 year old probably not…where as the 50-MPH Stealth Bomber could make sense. However, on the other side of the coin, it is possible that as more of these high-powered electric bikes hit the street, hard-core ebike legislation could kick in, ruining it for everyone.

Selfishly speaking,  the Stealth Bomber would be a fun vehicle to own, and Stealth has ebikes ready to pack up in fancy wooden boxes and  ship from their Australian warehouse. 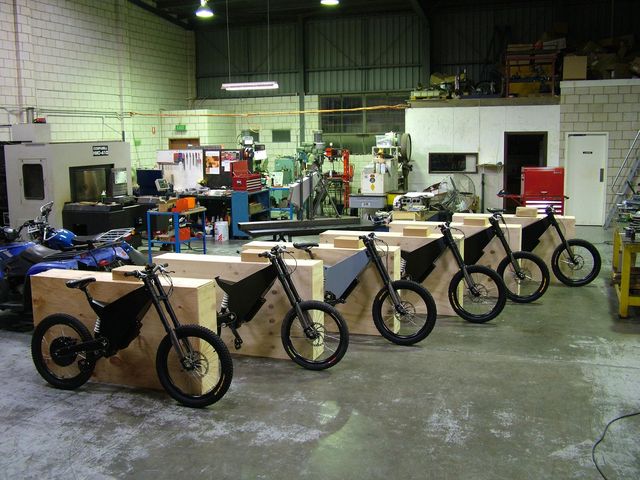