Several large manufacturers have decided to embrace a common charging plug standard, called “Rosenberger Power and Data” (RoPD). It is being promoted by the EnergyBus association, and I think it is a good thing. Unless a couple of other very large E-bike manufacturers stubbornly adopt a different standard, almost all E-bike companies are likely to fall into line over the next few years.  In 2017 Lunacycle.com has announced that their USA made Fusion Ebike Batteries for their new line up of custom built Luna Cycle ebikes  will feature  the Rosenberger connector. How did it start?

In 2002, the German postal service began experimenting with E-bikes to deliver mail on certain routes where E-bikes would be appropriate. They soon had over 6,000 pedelecs delivering mail, but when competing companies wanted to bid on future E-bike component supplies, Deutche Post realized that the different companies all used unique connectors and different charging protocols.

The driving vision for the new interface was based on the success of the automobile industry using the 1983 CAN system from Bosch (Controller Area Network), and also the success of the USB interface for the computer industry (Universal Serial Bus). Something was needed that would be backwards adaptable to existing systems, and also future expandable to allow likely developments for Light-Electric-Vehicles (LEV’s) .

These concerns were first presented at the 2004 LEV conference (in Taipei, Taiwan), and soon an international team of seven industry leaders began studying and discussing the potential issues to ensure a good first effort. In 2007 a protocol similar to CAN was adopted and soon after five more companies joined the association.

In 2011, the finished V1.0 standard was released, using the connector and communication protocol developed by Rosenberger. There are currently 58 members who have agreed to use the RoPD connectors and charger communication interface…including BMW, Bafang, Panasonic, and many other industry leaders. All new electric wheelchairs and mobility scooters in  Europe have switched over to the RoPD connector, along with battery-operated mobile medical equipment. 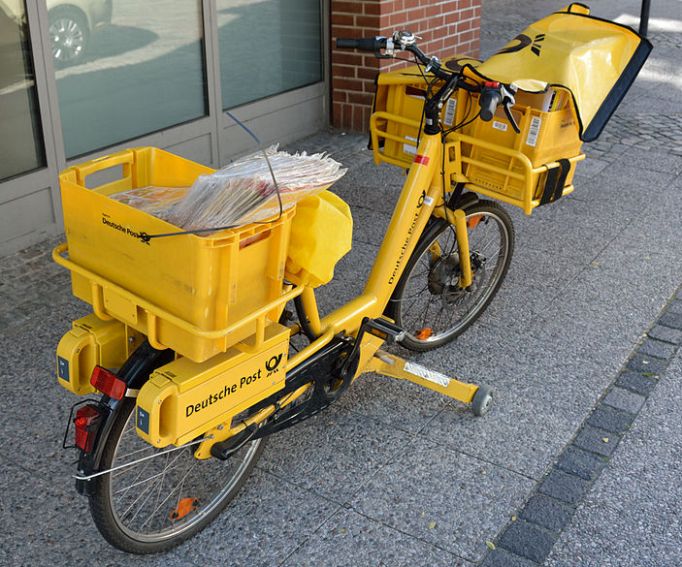 This Deutsche Post E-bike has a front geared hub that provides 14-MPH (23 k/h), and the batteries are made to be swapped out quickly and easily. These bicycles were made by Sachsen Zweirad (Saxony Bicycle).

How does it work?

The common RoPD connector standard is rated for 12V-48V, and a maximum of 40-Amperes of current.

The plug is polarised, so it cannot be plugged in backwards.

The system is for DC only, and there are two main power pin connections, with 4 smaller pins to transfer data.

The insertion depth is shallow, and the connectors are held together by a strong magnet. This protects the system from damage if the user pulls away without properly separating the connectors. The male contact-pins are spring-loaded to ensure good contact is maintained at all times.

The connectors will not energize the battery charging power until the data transfer connection verifies all the vital information. This feature also helps ensure a long contact life, since normal operations will not have any arc erosion problems.

If the battery pack has an embedded temperature sensor, the data pins allow a smart-charger to monitor the heat and adjust the charging amps to keep the battery within safe limits, while still charging as rapidly as possible.

Before charging can begin, a memory chip in the battery pack will use the data-pin connection to inform the smart-charger of the battery chemistry, the amount of Amp-hours (Ah) in the pack, and the cycle life record. If no identification chip is detected, the charger will request manual charging instruction inputs.

If the smart-charger senses a short on any of the connecting pins (due to moisture or any other reason), it will terminate charging immediately. 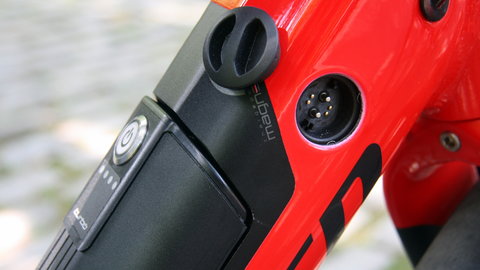 The RoPD charging socket on a Specialized Turbo Ebike.