This is the most impressive friction drive I’ve seen so far. It uses a battery pack made from the very safe 18650-format cells that we love (found on safe and reliable cordless tools), and it has several very clever design features that I think will change a lot of peoples minds about what a friction drive is capable of. It provide 750 watts of power, which is the US legal power limit, and I have personally run a friction drive of my own design up to 1000W before it began to loose traction, so this is a very balanced design.

edit: as of October of 2018, the company is now called “OneMotor“ 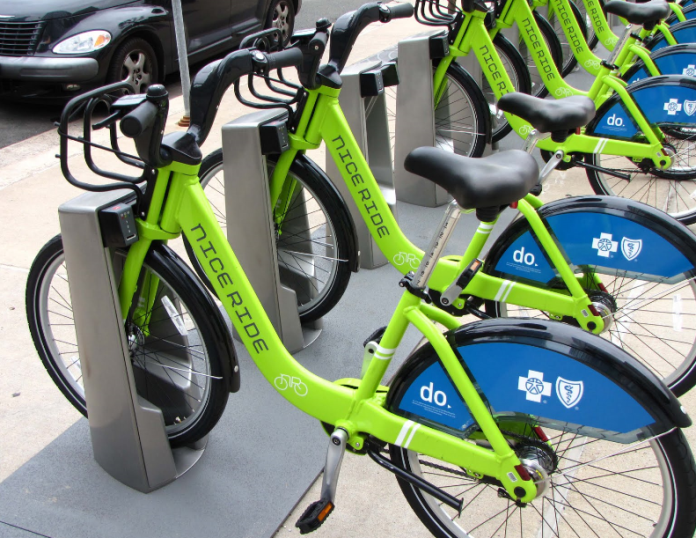 More major cities are trying out a Bike Share program, where rental bikes are very cheap, and you can lock them up at racks that are scattered all over the city. Rent the bike in one place, and lock it up in another, while you only pay for the actual time you used it.

The “Share” part of the ShareRoller is a reference to how many large cities are now using a “Bike Share” program. These are bicycles that can be rented very cheaply, and when you reach your destination, you simply set them into a nearby Bike Share rack, and you are only charged for the time that you used it. Having these bikes available in the congested cities will reduce the need for workers to drive their cars in, so it relieved a great deal of congestion.

The Netherlands is very “bike friendly”, but they actually have a lot of bicycle congestion. By having a program were each bike can service the needs of several people throughout the day, a modern city can have fewer cars, and also…fewer bicycles. A bicycle parking structure in the Netherlands. Bike friendly? Oh yeah…I think so! Gasoline is about $8/gallon there.

And this brings us to the ShareRoller. The Bike Share bicycles are very robust and durable, in order to withstand years of abuse, and that means they are heavy. Many Bike Share bicycles are a single-speed, or at best a 7-speed…in order to simplify maintenance and repair. So pedaling one of them can get very sweaty, especially during a very humid summer! It’s no surprise to us that office workers didn’t embrace that user-model as much as the designers hoped they would.

This creates a dilemma. If the Bike Share bicycles had an electric power system added, the municipal program that administers them would have the added expense, maintenance, and repair headaches…which they were reluctant to take on. One issue is that renters often abuse equipment in a way that they would never do if the device was owned by them.

Psychologists call this the “tragedy of the commons”. If everyone “owns” something (a “shared” resource) then, no particular person is responsible for upkeep and care. For instance, if getting a flat tire on a Bike Share only means that you put one bike back in the rack, and just check out a different bike (at no extra charge), then…the rider has no incentive to avoid riding over nails and debris. Not that you would ride over sharp objects on purpose. Its just that…most people in that situation would ride without any extra care or concern.

So…we now find ourselves in a situation where these great programs are under-utilized because the bikes themselves are built like tanks. The bikes can take any abuse customers dish out, but how can they be made more usable so we can get more people to actually use them, instead of just talking about how great the program is?

The ShareRoller could have initially been rolled out as a friction-drive for the masses (and later, a variation designed for Bike Shares), but their initial push has been directly aimed at Bike Share programs, and I think that was a great decision.

By designing it to snap onto Bike Shares, it can then easily be adapted onto the publics personal bikes with almost no changes other than an inexpensive adapter to make it fit your individual model of bike. This also creates a situation where many people who are unsure, or unaware about electric bikes…they will see ShareRollers being used, and may even ask their friend to allow them to take a test-ride. The initial primary market for the ShareRoller is all of the Bike Share bicycles, and there are quite a few out there already, with more on the way.

There are over 15 major cities that use the PBSC/Bixi “Share Bike” interface that ShareRoller was designed for (which is used in the USA, Canada, Mexico, UK, and Australia!). The ShareRoller can be adapted onto just about any common bicycle frame, and here it is on one of my favorite commuters, the Electra Townie. The ShareRoller will even attach to a kick-scooter, which can be folded and carried on just about any train or bus, for a very handy commuter transport solution. 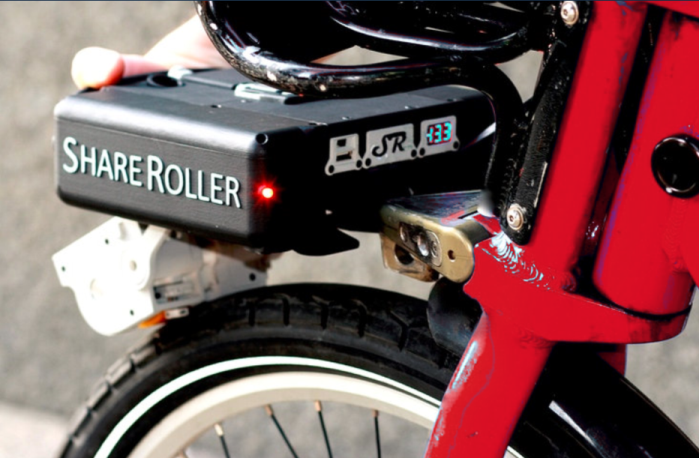 This pic shows the ShareRoller about to snapped onto the locking lug that Bike Shares come with. This mounting/locking interface has been standardized in many major cities that are moving in this direction…the already existing market for the ShareRoller is huge! 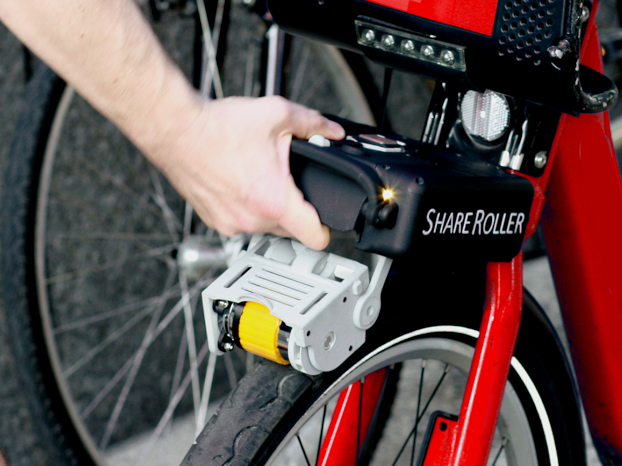 Here, the ShareRoller is being shown with the yellow rubber sleeve that helps the drive unit maintain traction, even when occasionally running through an unexpected puddle. 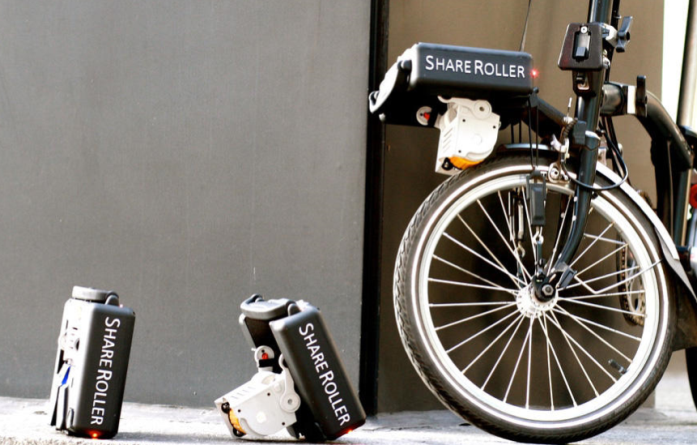 This pic shows the very light and compact ShareRoller when it is completely folded up, next with the motor flipped-out, and then fully deployed onto a full-sized bicycle.

Another close-up to show the details when it is mounted on a kick-scooter. You can use the ShareRoller on a solid-rubber tire that is found on some fold-up kick-scooters, but I much prefer pneumatic tires to smooth-out sidewalk irregularities. 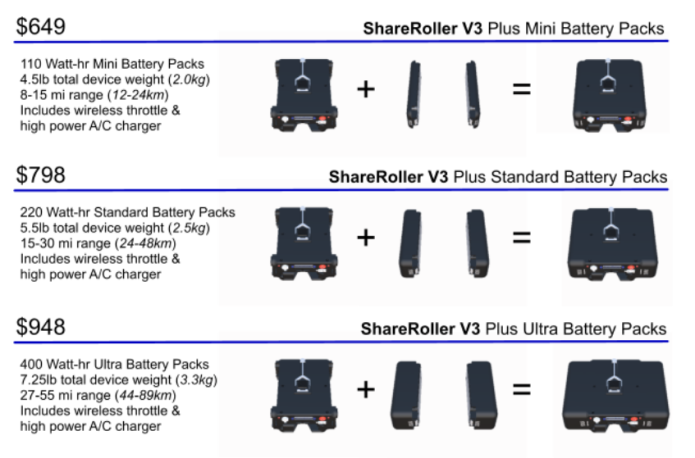 The central drive unit contains the controller, the motor (which also acts as the roller), and the small twin LED headlights. There are three different sizes of battery, so you can choose light, small, and less expensive, or…longer range. The packs are 6S / 22V, and each battery has a USB port for charging smart-phones or any other 5V device, like a GPS…

The device has been fully prototyped and endurance-tested. The designer launched an Indiegogo crowd-funding campaign to speed up the move into full production. But, don’t worry about if this innovative product will make it or not…he met his funding goal in the first four days!

My initial interest in friction drives several years ago was for local college-students, who couldn’t take their bicycle indoors at night, either because their was no room inside their rental, or they lived in an upper story dorm or apartment. With one of these, you can leave a cheap bike locked up outside, and bring the entire drive unit and battery inside to charge it. It pops on and off, quickly and easily.

When I first viewed the video ride-review (link below), two things jumped out…the designer is incredibly smart and very articulate, and also…this kit needs a wireless throttle. Well, as I continued my research, I found out that the wired version in the video is the initial first version (V1), and the Indiegogo campaign is for the newest V2 with a bluetooth wireless throttle…I had a good idea that it would be upgraded eventually, but the designer has decided that this kit needs the upgrade before the unit goes into production…good choice!

Links
Here is a link to their home web-page, and…

Here is a link to a video-review from Electric Bike Review (EBR) by Court Rye.

Here is a link to their Indiegogo campaign, which ends December 2nd, so if you want one, there’s not much time left to get “early bird” discount pricing.

Here is my friction drive from five years ago (2010), so you will understand that I am not just blowing smoke up your caboose when I say this is the best friction drive out there. I know what I am talking about here…

Based on feedback from customers, This company has come out with an upgraded version with a variety of sophisticated features. The new model is called “Onemotor“