Sine-wave controllers are starting to get some interest, so we thought some of our readers would like to know what the benefits are, so they can decide if one of these is the right choice for them.

The brushless motors that are common on E-bikes today have permanent magnets on the rotor (which is the part that rotates), and there are groups of electro-magnets on the stator (the part that is stationary), and these electromagnets are arranged in groups of three, which is why they are often called “3-phase” motors.

If you look at an electric motor set so that it is laid out like a clock, imagine that as we are looking at the 12 stator electromagnets that are set around the rim, then… coils number one / four / seven / ten would all be energized at the same time. Let’s call this phase group “A”. Then…all the “A” coils would be de-energized, and then stator coils number two / five / eight / eleven would be energized. This is phase group “B”.  Then the B’s are de-energized, and the remaining three / six / nine / twelve are energized as phase group “C”.

The ON/OFF switches that do this are Field-Effect-Transistors (FETs). They are a cheap and robust way to accomplish this job. Its possible to increase the amps that a controller can flow by swapping in three larger FETs, but the common method is to simply add 3 more small FETs to the first 3. This is why controllers are rated according to the number and type of FETs. The Lyen/Xie-Chang 6-FET is popular for anyone who wants a maximum of 30A. Of course, this controller can flow much more as a temporary peak, but it is well-known to be able to shed the heat of a fairly continuous 30A.

Since a FET is a simple ON/OFF switch, the power changes to the stator coils is very abrupt. Hubs are well-known to be quieter than geared motors, or the exposed chain-drive non-hub systems. However, even though direct-drives hubs are fairly quiet, there is a certain mild “buzz” that comes with them because of the “square-wave” of the abrupt on/off of using FETs (sometimes called a “trapezoidal” wave). They are fairly quiet when maintaining cruise speed, but the buzz is noticeable when trying to accelerate from a stop.

A sine-wave controller is a completely different animal. They still use FETs, but they manage them in a different way. If the common operation of a FET is like a simople on/off light-switch in a room in your house…a sine-wave is like a dimmer switch, where the applied power is dialed-up with a smooth curve to a peak “on” level, and then a smooth curve back to off.

Since we are talking about mass-produced Chinese electronics, they should become fairly cheap and relatively soon, but…there are currently not many models to choose from.

Here is a graphic (courtesy of robotics.stackexchange.com), which shows a rough simulation of the difference between a trapezoidal wave (sometimes called square-wave) and a smoother sinewave power application to each motor phase-group.

Here is a one minute video of a real-time sine-wave signal driving an electric bike motor. 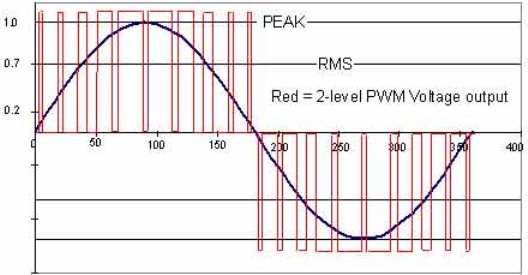 Here is a graphic that attempts to show how Pulse-Width-Modulation (PWM) is used in an E-bike controller to simulate a true sinewave as closely as is practical.

From ES builder d8veh, on his new sine-wave controller hooked up to a GNG gen-2: “..It’s definitely quieter than a KU123. It’s not silent. it makes a slight whirring noise, and at certain speeds/powers you can get a bit of resonance, but still not quite as loud as a square wave controller…This one will be my preferred controller for all future builds…” [BMS-Battery, 500W, 36V/48V model: S12S]


Below are several more sine-wave models I have found. If this interests you, check back in a few months and we will post any more info we have gathered.

Justin, from ebikes.ca is developing a 20A and 40A sine-wave controllers. He is one of my personal top-three preferred vendors due to his personal commitment to only carrying quality products that are reliable, and his industry-leading customer support standards. I will post his controllers here as soon as his catalog starts carrying them.

Minshine, 1900W max, 36V/48V 20A-40A, this is another model that should prove to be popular, so we will be on the lookout for anyone who has actually used one of these.

Nanjing Lishui, 500W-max, 36V 15A This model is sensorless “pedal-first” model, and can be programmed with a 250W limit.

From ES member t3sla: “…it is near dead silent…”

SVMC048060, 1500W-continuous, 48V 60A-peak, scooter controller from Sabvoton (60V and 72V models also available). Since this is made for a scooter, it can handle high amps and is physically large.

From ES member Nanoha “…the motor spins up far quieter than with the infineon [controller]…the near silence complemented the smooth throttle perfectly. The high pitched whine is audible if I’m riding very slowly, [but] at higher speeds, the wind is much louder…Yeah, such a shame as it makes the motor almost silent. Once that happens, other noises become more apparent. I could almost hear my own shit eating grin…after exchanging emails with Kathy regarding changing the switching frequency of the controller.
It can only be changed at the factory at the request of the customer. You want the max, which is 16kHz.”

Adaptto from Russia.  They currently make two models; the Min-E 65A 6-FET, and the Max-E 140A 18-FET . They both are rated to operate 24V-100v systems, and they are currently developing upgraded models to run up to 150V. Their respective prices are listed at approximately $450 and $750 (depending on the exchange rate to the Ruble). They are currently available through adaptto.com.

Here is a discussion thread from endless-sphere on the Adaptto sine wave controllers.

Here is a post from a robotics website, which discusses sinewave commutation in very technical terms for those who want to know more of the specifics. It also mentions that “Space Vector Commutation” (SVC), is even better than PWM-simulated sinewave commutation (concerning efficiency and smoothness), but SVC requires a much more rapid real-time computation on the part of the controllers brain.