Smart E-bike is officially in production, and we are now seeing the first pictures of the electric bike on the factory floor (read our story on Smart E-bike here). To Smart’s credit, this electric bike is not being built in China like most electric bikes, but in a factory in Sangerhausen (near Leipzig in Eastern Germany). And  these pictures are proof that there is real effort being put into this product.

I am more excited about the Smart bike than I have ever been. The Smart E-bike even uses a western company (Canada based Bionx) to supply all its electrical components (controller, battery, and hub motor). Although it is indisputable that some of  the parts of the Smart E-bike are made in Asia, these photos are proof that the bike is for the most part made and assembled in Germany.

For $3500, this bike is seeming like a better and better deal. Even the $3500 “Swiss”  Stromer (read review) is made in China. And if you are an electric bike Ebay flipper and you think you will be able to poach a container full of precious Smart E-bikes off of Alibaba, good luck because you’re dealing with German ethos now.

To start with here are some component pictures:

Handlebars with all controls installed. 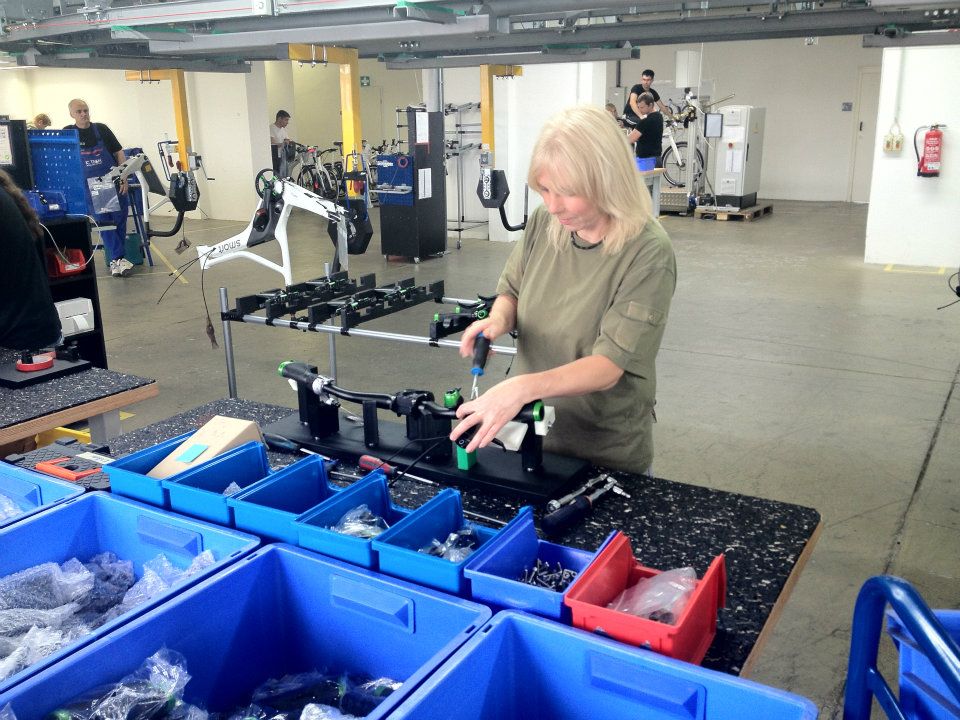 Its this nice lady’s job to assemble on those steering assemblies. She looks serious. 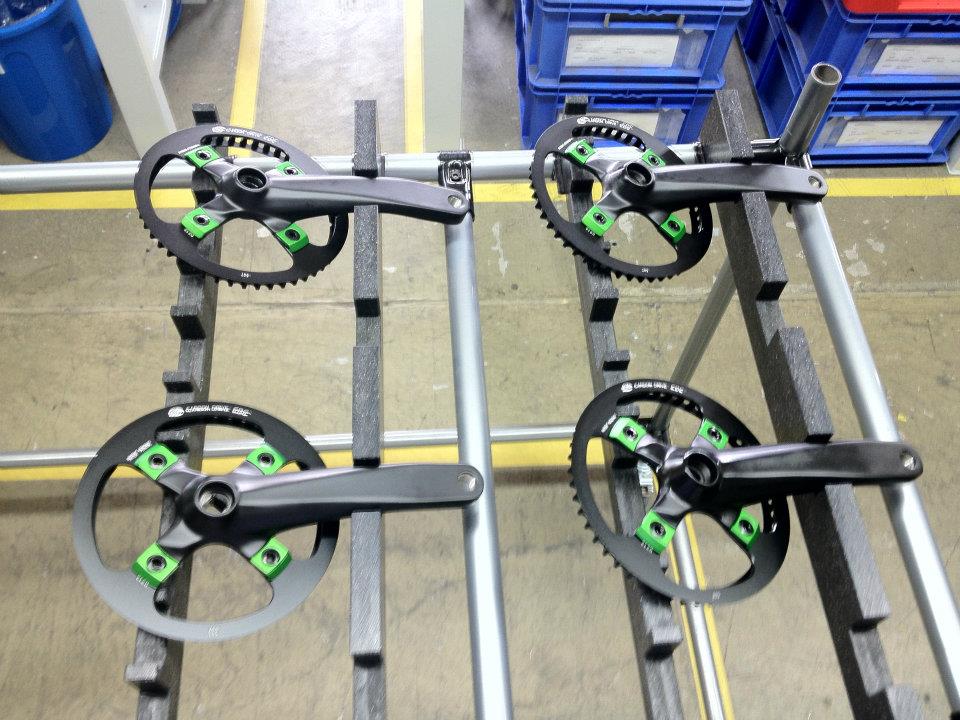 Front sprockets and crank sets which will power the Gates Carbon Belt Drive. 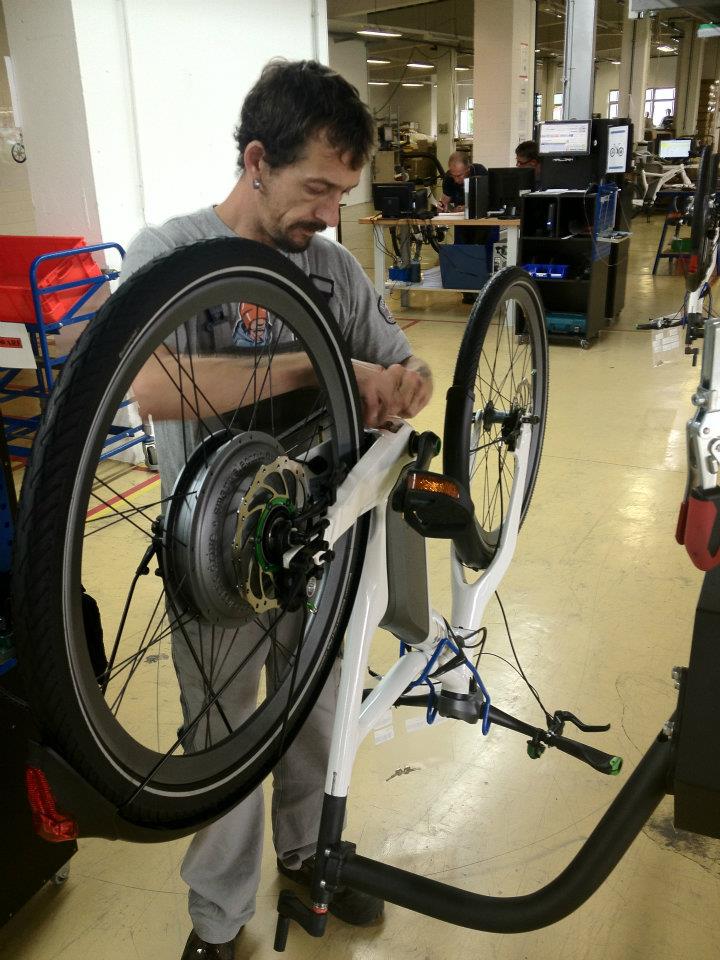 Installing a belt drive is trickier than a traditional bicycle chain install. 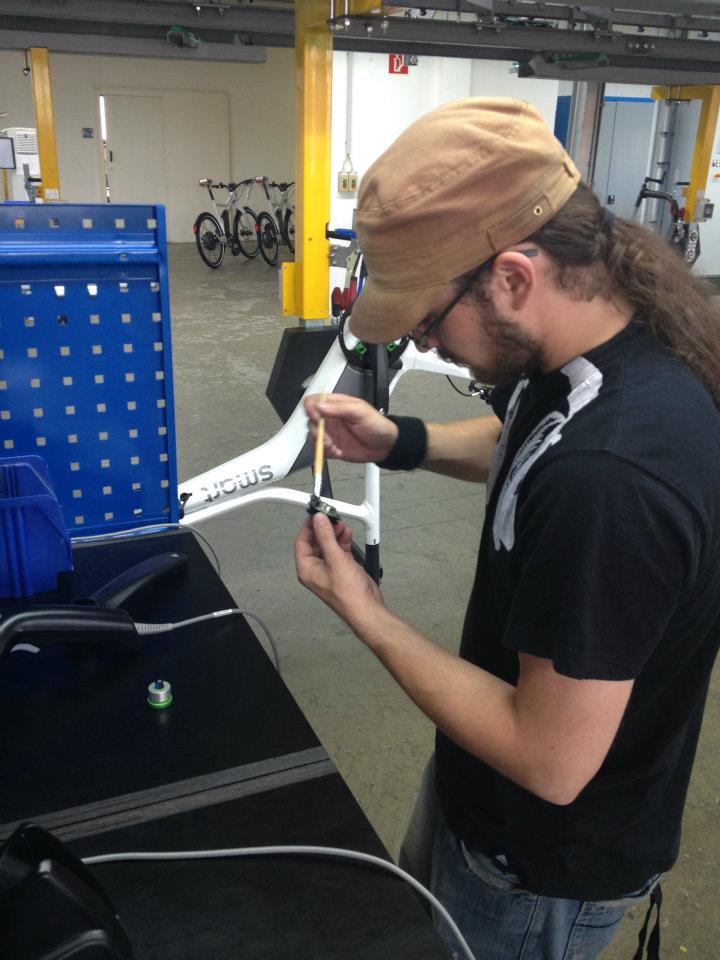 Every bolt and nut on the Smart Bike is fitted by hand in Germany. 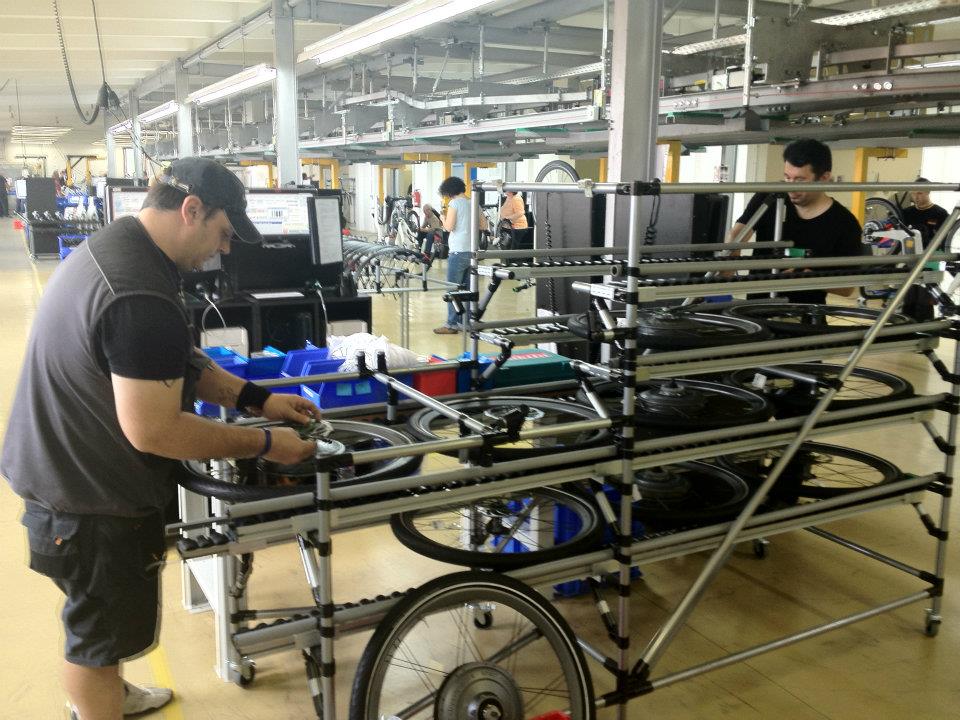 China is notorious for doing hub motor wheel builds of poor quality. Its hard to get a Chinese built hub motor wheel to stay true. If you notice the lacing job on the smart bike it looks totally different than the standard 36 spoke laced wheel, but also not as fancy looking as the rims seen  in earlier Smart prototype pictures. 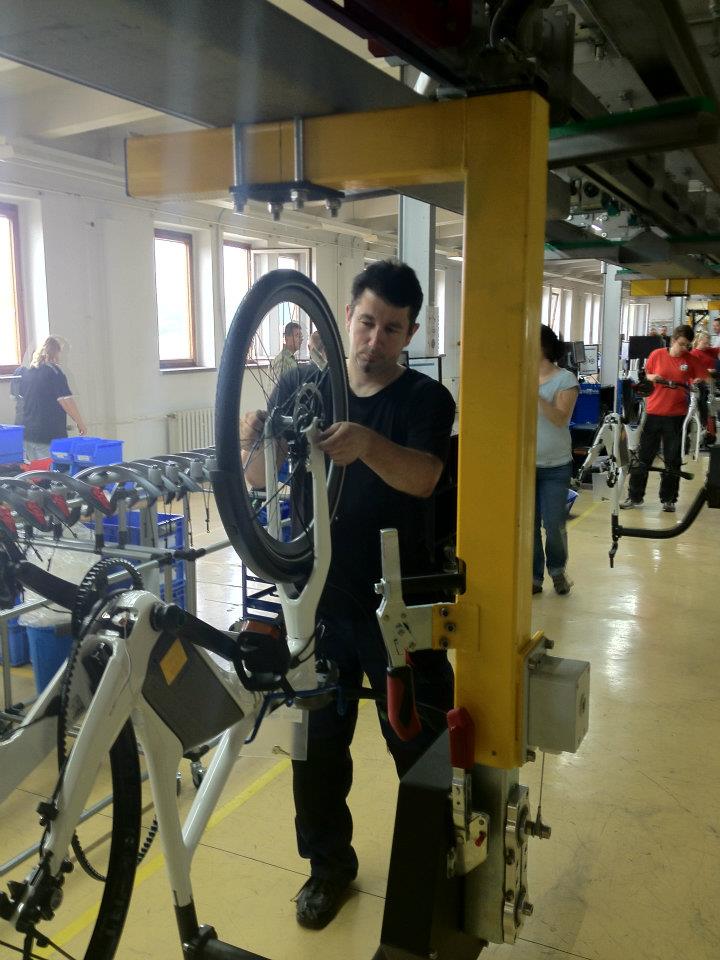 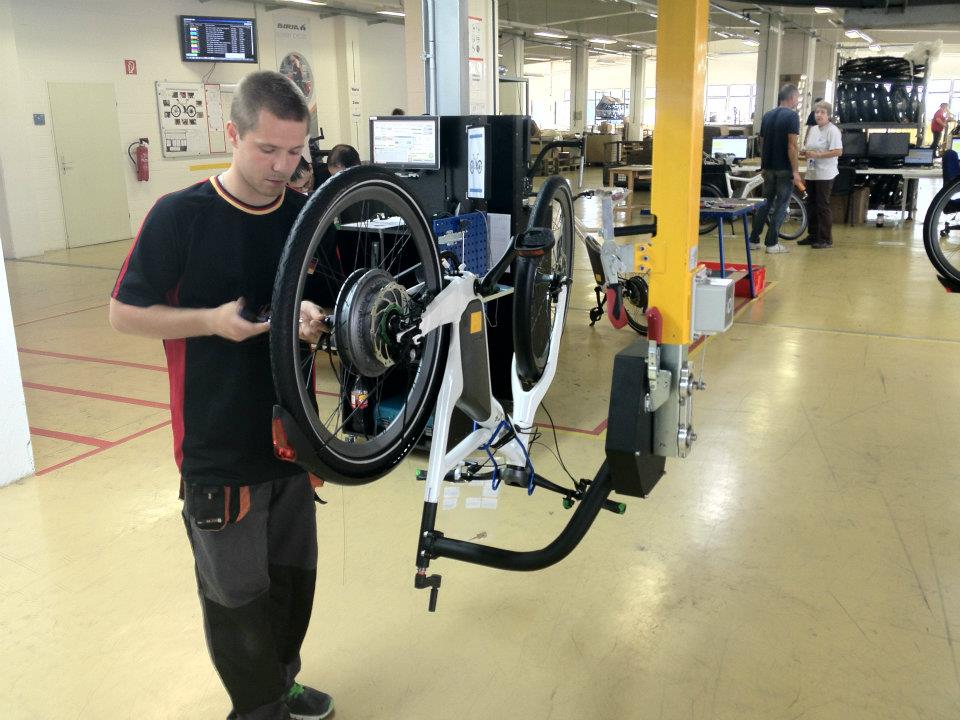 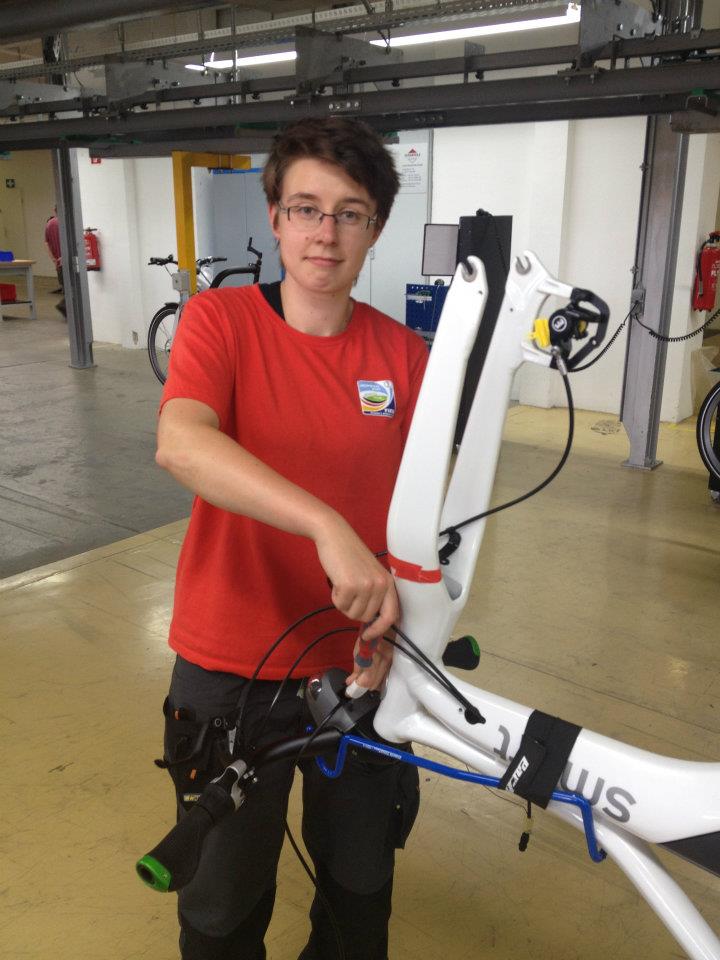 The wiring is smartly threaded through the frame, labor intensive but will give the bike a “cleaner” look. We also like the fact that Smart decided to go with rigid front forks over front suspension forks (usually of cheap quality on electric bikes).

Here you can see that the Smart E-Bike is made efficiently with a full assembly line, and many German employees. 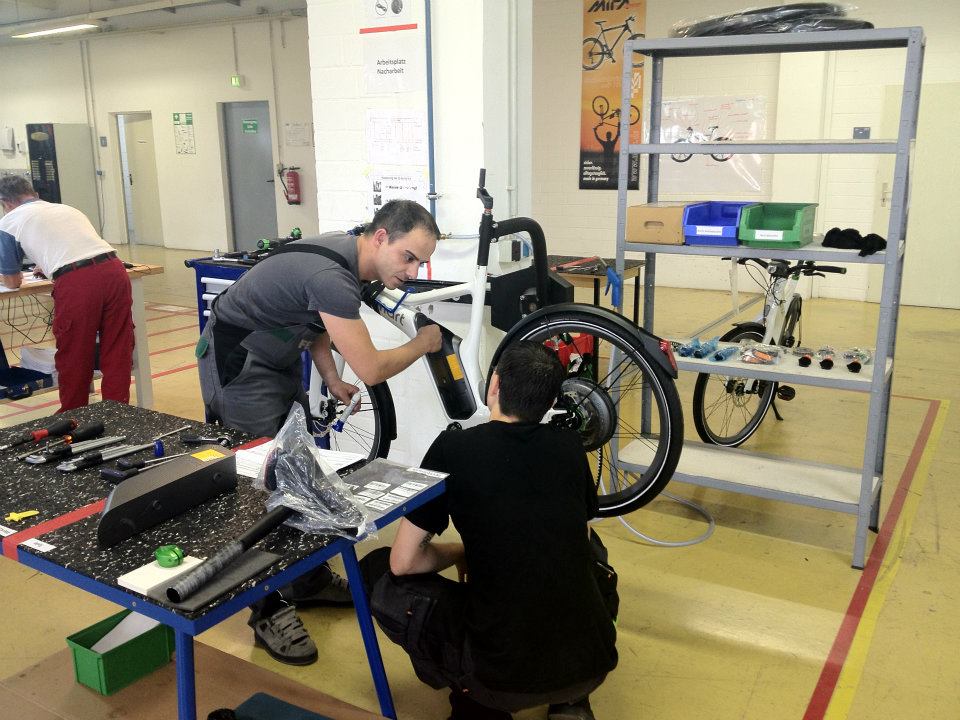 The LiPo battery being installed in the purpose built frame.

You know an E-bike company is serious when they dyno test every bike that comes off their assembly line. 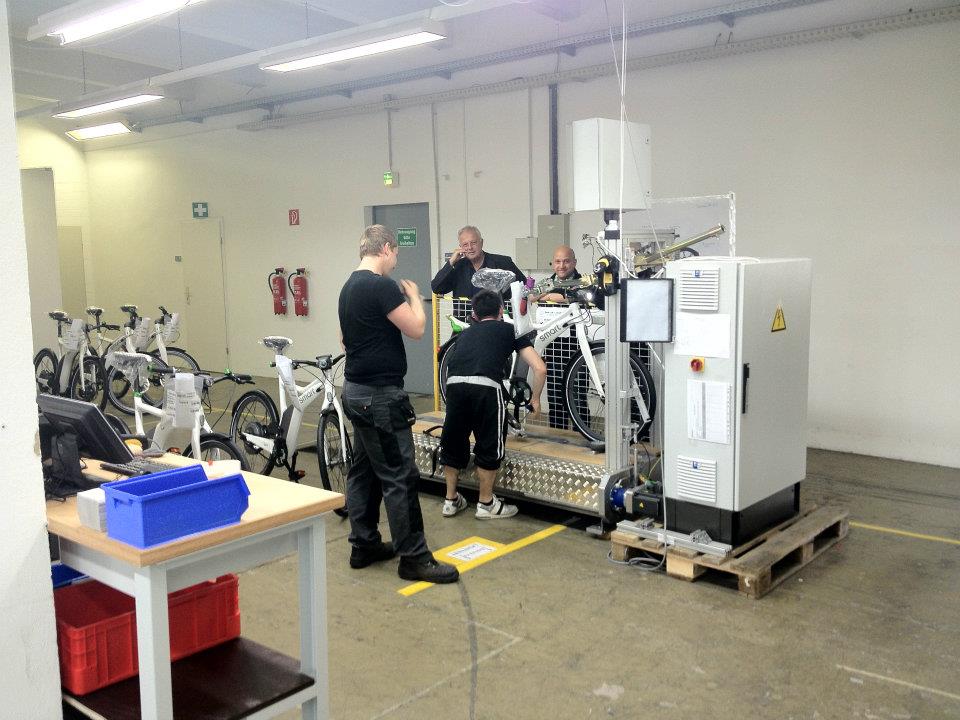 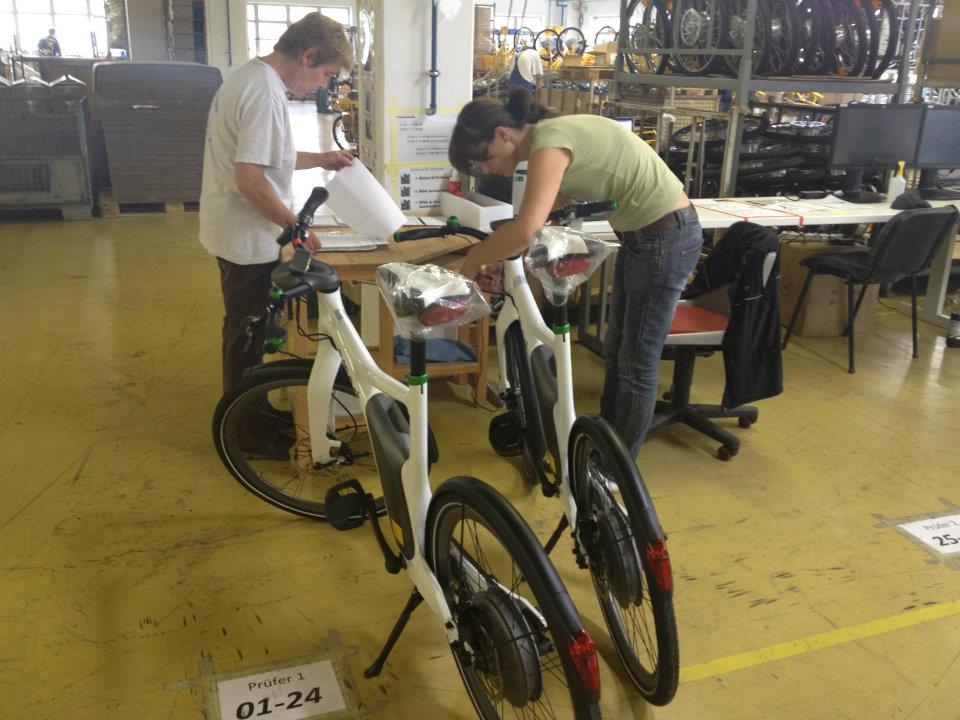 Final tests and checks before E-bike is packaged and shipped out.

Smart E-bikes packaged and ready to be sent to Smart Dealers across the world.

Thanks to the people of  Smart E-Bike for the pictures and the insight into how this clean E-bike is made.