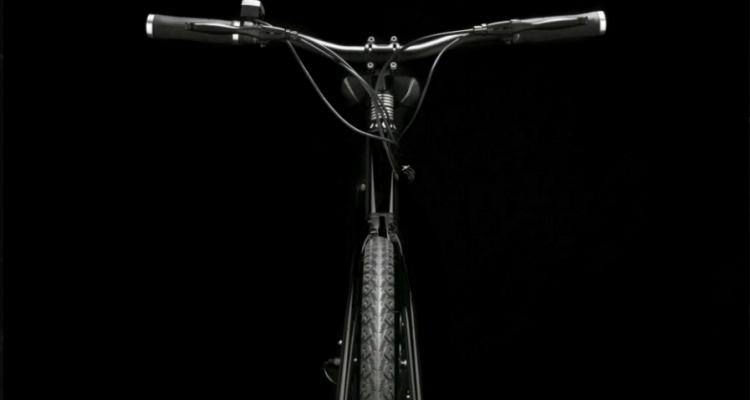 Sondors is at it again, the 2016 Sondors Thin

The Sondors ebike company made a huge splash in 2015 when it raised over 6-million dollars to sell fatbikes in an Indiegogo campaign. In the beginning, there were many people who thought that it might just be an elaborate scam, but…Sondors has actually delivered thousands of fatbikes so far to the customers who have pre-ordered them. Right now, their credibility is on firm ground, and they are taking this newfound respect and introducing a model of ebike that they feel is the next most-needed model…a light and thin street commuter.

This type of ebike is designed for a city rider, with fairly smooth streets (thin tires, no suspension). The mild-assist hubmotor would struggle on long and steep uphills, like San Francisco, but…for any major city that is fairly flat, the 350W geared hubmotor using 36V would actually work quite well. I can see this ebike appealing to college students, simply because the “fixie style” bike with a single-speed drivetrain is already a well-known fashion in that demographic. 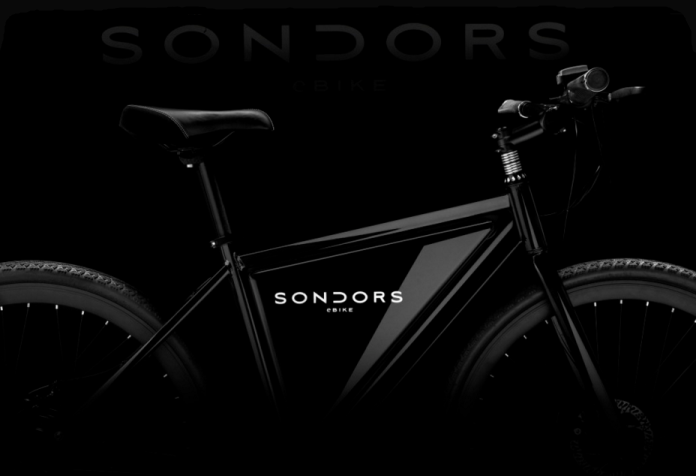 By having a model that is thin and light, it can be more easily carried into an office, or carried up stairs…so that the ebike can be stored indoors instead of locked up outside. The Sondors fatbike was a great platform for upgrading the power from the very beginning, but I don’t imagine many of the “thinbike” customers will be hot-rodding it.

Although…it would not be difficult to add an identical Bafang hubmotor to the front in order to make this a 750W US legal 2WD ebike. That would add weight and cost, and might even require a higher amperage battery pack, so…don’t leap into that until you have done your homework.

Due to the thin tires and lack of any suspension, I highly recommend to anyone thinking of buying this ebike to also seriously consider the additional purchase of a Suntour NCX suspension seat-post. That would be the single most desirable addition to making this ebike much more pleasant to ride (wait till the Sondors Thin arrives, so you can measure the diameter of the seat-tube).

The aluminum frame is lighter than steel, and less expensive than the ultra-light carbon-fiber, so…its a good fit for the Sondors goals on this model.

The battery case in the center of the frame triangle was a distinctive feature of the first Sondors fatbike, and it is prominently used here too. I think many ebike manufacturers at the “more affordable” end of the scale have not realized how much this central case appeals to the average customer. It doesn’t just house the battery in a great location (for weight distribution), it also hides much of the wiring clutter that customers prefer to be hidden. 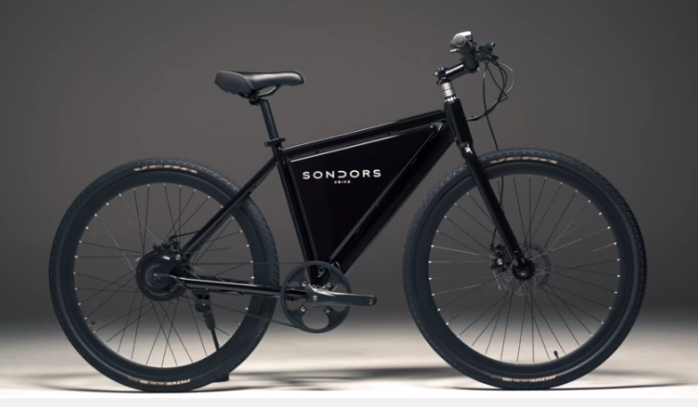 Opening the frames triangle case reveals a sleek triangle-shaped battery inside a hard case. The original fatbike simply mounted a common “bottle” battery inside the frames triangle case, in order to quickly source components that were readily-available. However, Sondors now has the experience to make some savvy choices, and can confidently order custom-made batteries to his exact spec. 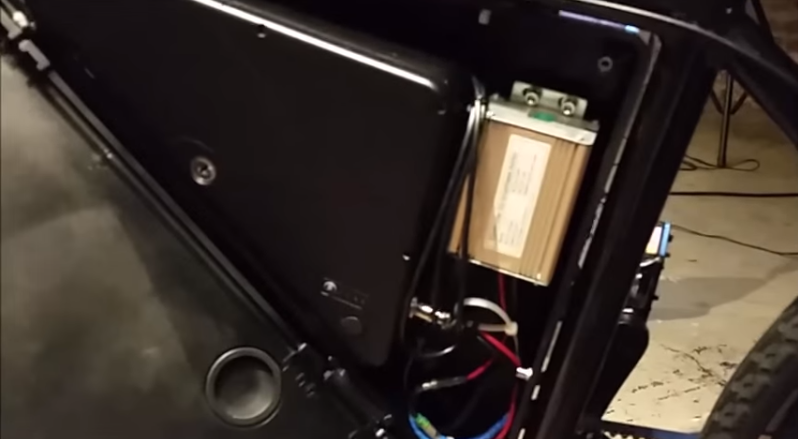 Its impossible to tell just yet, but it appears that the motor and controller in the new Thin are identical to the units used in the original fatbike, which have performed well so far. 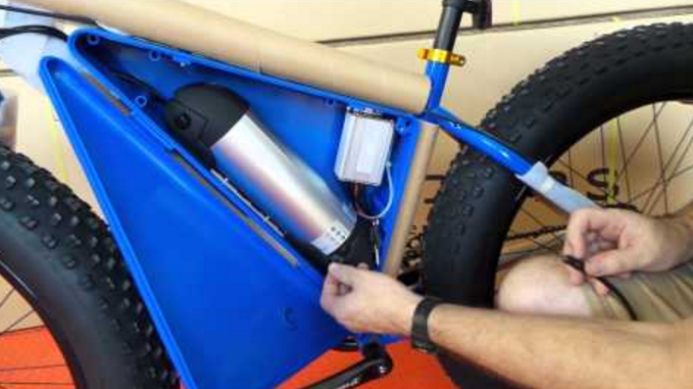 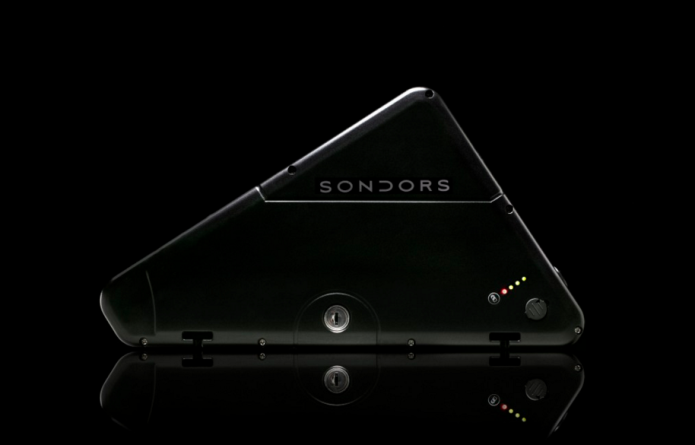 The battery hard case has 4 LED lights to indicate the state of charge, and that is “good enough” for most customers. In the lower pic (a screen capture from the demo  presentation listed below) the battery appears to be too narrow to be using the common 18650 cell format on its side (which is the common method), so if it is using the 18650 format (18mm in diameter cylinder, 65mm long), they “could be” mounted lengthwise to make the battery thinner than normal.

We can only speculate about which cell is being used, but if it is the Panasonic PF/PD cells (which are becoming quite common), then…they can produce near 10A per cell, meaning that the 3P configuration of this pack would provide close to 30-Amps. If you are only drawing 15A from a pack that is capable of 30A, it will stay reasonably cool, and should last a long time. 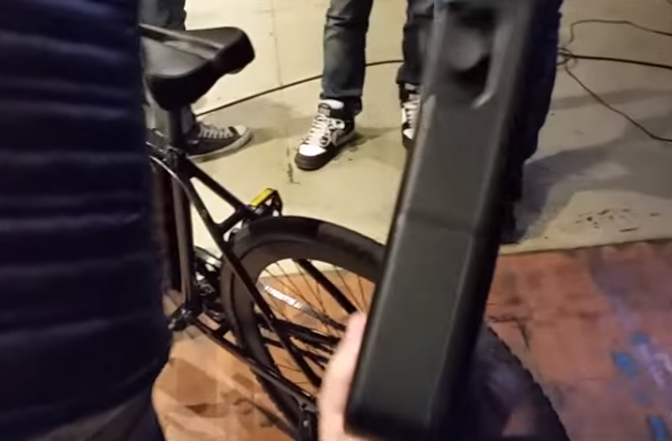 Here on the left, you can see the common 68mm wide bottom-bracket, and how the outer triangle case is not as wide as that. In the foreground, someone’s right hand is holding up the inner pack hard case to show how thin and light it is.

You can also see here the narrow tires, and the “deep V” rims that he is using.

This is a $150 dollar option that will appeal to many of the early adopters. One of the benefits of a belt drive is that it never needs to be adjusted or lubricated. Also, the chain on the base-model Sondors Thin will absolutely require some lubrication on occasion, and after a short while, all chains get greasy when dust and dirt gets attached to the lube. If you have a lightweight bike like this…and you chose that, so it would be easy to carry…you will occasionally get chain smudges on your clothes as you are carrying it in and out of your home or office. A belt will be much cleaner. 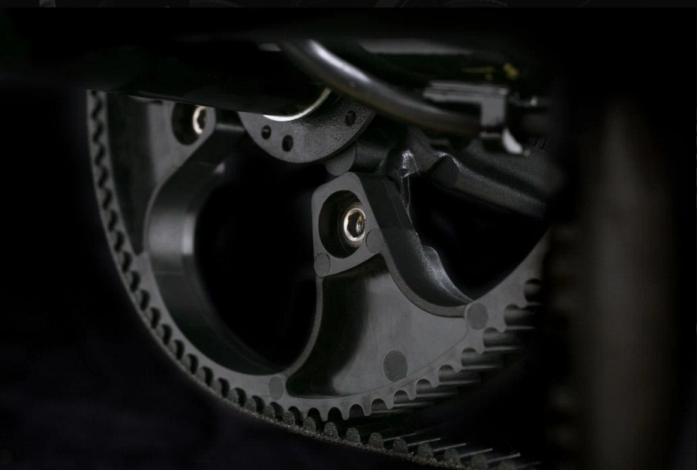 This is definitely NOT the famous Gates carbon belt system, but since it only ever sees the power of your legs when they pedal (no mid-drive), it will likely be strong enough for this task. Here’s some info on chain vs belt from Cycle Monkey Lab.

These are the most affordable disc brakes available, but even so…they should be more than adequate for the normal customer that you’d find on a bike like this. For those new buyers who are not very experienced with bikes…whenever the brakes are applied, the weight of the bike and rider are shifted forward, so the front brakes take the majority of the braking force. If someone wanted to improve the braking of this bike, there are kits that allow anyone to swap-in a larger diameter front disc (180mm or 200mm, instead of the stock 160mm), along with an adapter to move the caliper farther out.

You could also swap-in a hydraulic front disc brake (the rear wheel definitely doesn’t need hydraulics), but…those are somewhat pricey, and I don’t imagine that many of the budget-conscious customers for this bike would do that.

One of the things I like about a front disc brake is that…when coupled with a “quick release skewer” style of axle, I can quickly and very easily remove the front wheel (without any tools) to make it easier to load onto a bike carrier, store it, or just carry the front wheel with me for added security. 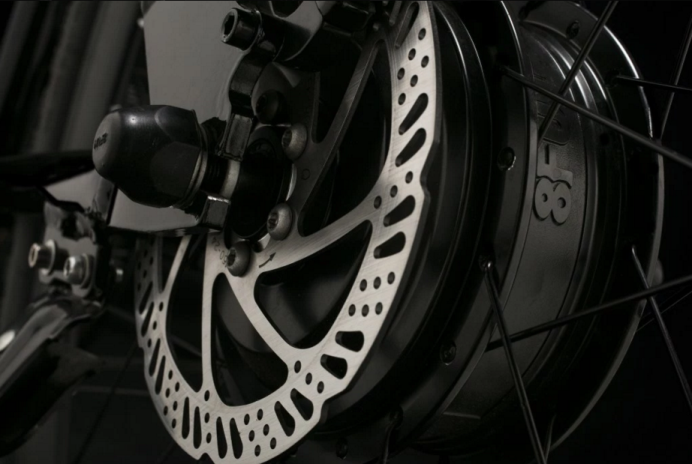 Lessons to be learned from Sondors?

Last year, Sondors had a lot of detractors, even after he began actually delivering the fatbike to customers. But now? Sondors has really shaken up the ebike market, and vendors should be paying attention. Gasoline prices have remained low in the US over this past year, and that factor has had quite a negative effect on ebike sales (every time gas prices went up, ebike sales immediately went up too). So ebike vendors in the US have had quite a struggle.

It is perfectly understandable that any business managers in the US who survive off of ebikes, have been deeply concerned about such a low-priced competitor. Sondors does not provide the type of customer support that a brick-and-mortar bicycle shop can provide. And yet…many customers who might have been considering buying a factory ebike from a bike shop have seen the Sondors, and bought one. 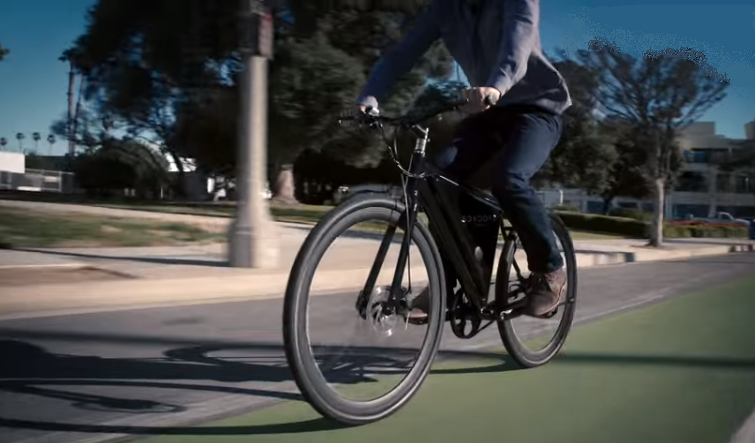 What if Sondors quit selling ebikes? Well, the cat is already out of the bag, because…when they very famously raised over six million dollars, that event got an incredible amount of free publicity. The previous year, there had been several “kickstarter/Indiegogo” crownfunded start-ups for ebikes that didn’t get much attention (the very brilliant and high-quality Faraday Porteur only raised $177,000). Now? there seems to be a new ebike Kickstarter every month.

One of the biggest reasons to buy from a dealer is to get the face-to-face support from a shop in your home town, but…customer support is also the biggest vendor headache by a long shot. How did Sondors grow, in spite of providing almost no support? Either by planning, or by accident…Sondors benefitted from a very large facebook group of fatbike owners who ended up helping each other. There are even several other facebook sites for Sondors fatbike owners who want to upgrade or hot rod their fatbike.

One lesson that I want to emphasize is that, polling has shown that customers have really responded to the frames triangle case. Some ebikes have been developed that tried to be stealthy and look like your ebike is just a regular bicycle (unless you looked closely). The Sondors boldly lets everyone know that this is something different, and thousands of customers have turned out to not be worried at all about riding an ebike that is clearly and visibly “different”. This triangle case also hides the wiring clutter, and customers like that a lot, too…

The bottom line from electricbike.com on the Sondors ebikes is…don’t bet against Sondors.

Here is a 3 minute video of the demo event, when the thin model was introduced.

Here is a link to the Sondors home page.