Most ebike companies start out selling mass-market street-legal commuters, and then slowly move into off-road ebikes with higher power. Stealth has gone the opposite route by exploding onto the off-road hot rod scene, and they are only just now producing their 750W street-legal P-7

Many of our readers are new to ebikes, so I’d like to recap a little history. Australia is the land of “Mad Max”, with lots of countryside, and a culture that embraces an irreverant sense of humor, coupled with a deep respect for self-sufficiency. Add to that…their government has instituted a baffling power limit of 200W for street-legal ebikes, and you end up with a situation where a lot of smart and capable back-shed builders created off-road hot rods…where there are NO power limits.

A decade ago, the only path to high power was a large rear hubmotor. Even if a customer wanted a mid drive, the large companies making them back then only produced low-powered models for the large EU 250W market.

Stealth Electric Bikes  is based in Melbourne, in South-East Australia. They started out making off-road hot rods that were designed to a high level of quality. That ended up being a wise choice and they have continued to grow, in spite of competition from cheaply made copies from wannabe clone-vendors. Their Bomber and Fighter models (now called the B-52 and F-37) continue to command respect with their power, features, and quality.

In 2015, Stealth got a shot in the arm with Samsung and Panasonic producing much-improved batteries for the global market. So…as of two years ago, you could have the same power and range with a smaller and lighter battery pack, or more power and range with the same size. Once customers could get the performance and range they needed from a smaller battery pack, some of them started wanting a similar frame, but with a smaller and lighter battery box, and that led Stealth to developing the FUTR Beta frame kit…

The FUTR Beta, and the Stealth P-7

You don’t have to look at the specs for the P-7 very long before you realize that, even though they are producing a new model, they are doing it by leveraging a lot of parts that they already stock. For instance, the brakes are the 203mm large-disc hydraulic caliper models that are also found on the Bomber B-52. 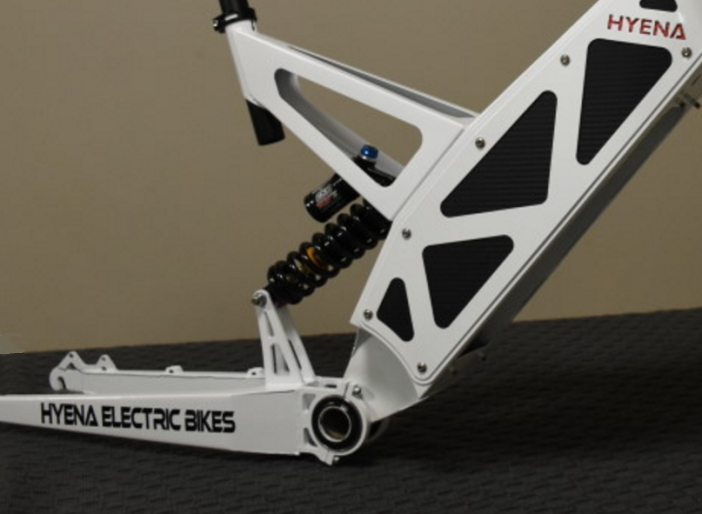 The P-7 frame is an evolution of their FUTR Beta off-road prototype frame kit, with a non-triangulated beam swingarm, using a concentric bottom-bracket and swingarm pivot, plus a slim and light battery box. The FUTR Beta and P-7 both use a swingarm with 135mm wide drop-outs, so mid-sized hubmotors will drop right in (such as the Leafbike 1500W, and the Edge 1500W).

Our Australian friend Jay put together a short video (below) of how to assemble the FUTR Beta frame kit, which allows customers to add their own motor, battery, controller, and forks…along with dozens of other small bicycle components. this video will give you a better idea about all the components that make up these frames.

The FUTR Beta prototype (FUTR: Fly Under The Radar) was an answer to riders who wanted an off-road frame that is as light and slim as possible, since modern high power-density cells often mean that a certain customer doesn’t need a larger and heavier battery box to hold a smaller pack.

In keeping with the lightness theme, the 750W P-7 North American version (a complete turn-key ebike) only needed a surprisingly small geared hub to meet their performance goals. Even though the FUTR and P-7 are both light and slim, the P-7 still has upgraded features that Stealth customers wanted, and were willing to pay a higher price for. 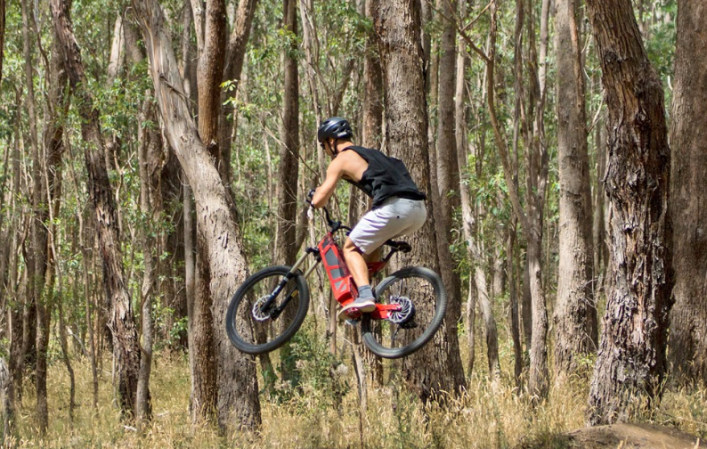 The P-7 is a very capable off-roader

I know this will sound like I am a Stealth fanboy, but there is a slice of the ebike customer demographic that has grown to expect the quality of Stealth products, and will pay more to get that…if…Stealth makes a model that suits their needs. I mention this because the P-7 price is a big pill to swallow for a 750W ebike, and many US customers only look at the raw performance figures (when riding off-road, this geared hubmotor is rated at 1,000W).

And…as far as running off-road, the P-7 has large 203mm discs front and rear, so you can access significant braking with just a finger or two, and this means you won’t need to upgrade the brakes just to run off-road once in a while (and brakes that are this large are also helpful if you are occasionally riding in traffic at 28-MPH).

The suspension travel has a significant 180mm stroke on the front, and 150mm in the rear, while rolling 27.5-inch tires, and the front wheel is mounted on a robust through-axle. In it’s lightest factory trim, its weight is 64-lb (29 kg). This is a serious off-road ebike that has been de-tuned to be street-legal in the US.

It also means that this is a solid platform for upgrading in the future. 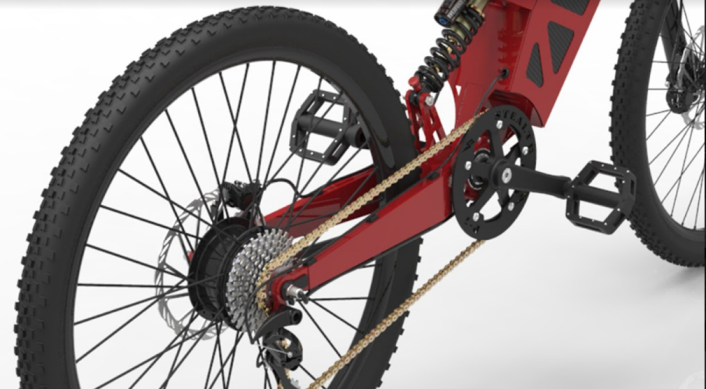 Although this is the mildest hubmotor Stealth has offered so far, the P-7 still has significant suspension components, big brakes,  and a HUGE 52V battery.

For several years now, global ebike companies have tried to market low-powered 250W Euro-spec ebikes in North America, and that has proven to be an uphill battle (the street-legal power limit is 500W in Canada, and 750W in the US). Austria and Switzerland have 500W power limits, and those versions of sophisticated mid drives from Bosch and others (with a few 500W hubmotors) seem to be selling at an acceptable level here. When I say “acceptable” I also mean “not great”.

Those companies seem to be trying to market ebikes to “bicycle people”, by producing models that look like “pedal-only” bicycles from a distance. This is because the bicycle culture here  has proven to be resistant to the idea of an electric-assist bicycle. There are thousands of pedal-only bicycles for every ebike in the US, and serious bicyclists call us “cheaters”. The ads and articles here emphasize that “people won’t even know its an ebike until you tell them!” as if that is very important (what?). So…in view of that, what would a Stealth P-7 customer from North America look like? 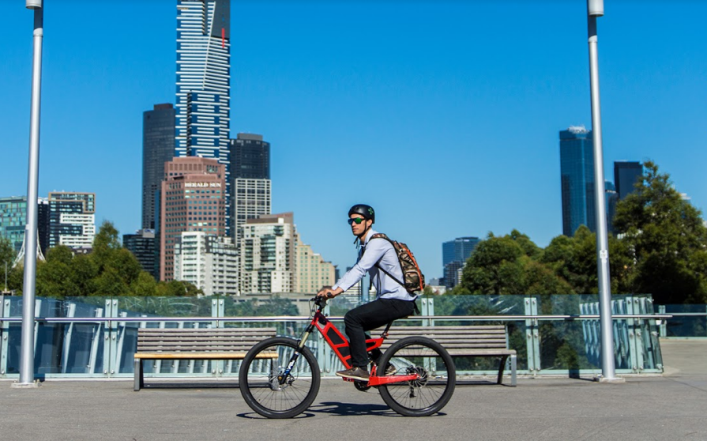 The Stealth P-7, in street-legal mode

This last feature…the huge battery? It is more important than just being able to ride a longer distance on one charge, or to take a lot of trips before needing to charge. We recently wrote about how to make your expensive lithium battery last as many years as possible. The number one tip is to get the biggest battery you can afford. This way, when you are charging and discharging it, the pack doesn’t get hot. Heat is the enemy.

The second tip is to only charge the pack to 4.1V per cell (90%), or less. This is what the Tesla car company does, and they warranty their lithium packs for eight years. This may seem like you are giving away 10% of your range to double the life of your pack (or more). The real figure is closer to giving up only 1/17th of your range, but…you don’t have to believe me, you can read the article here.

Stealth has decided to use the crowd-funding website Kickstarter as a sort of “group buy” for interested first-wave customers. We normally avoid writing about  Indiegogo and Kickstarter ebikes (there have been dozens), but Stealth is a solid company that will absolutely deliver all the P-7’s that are ordered. P-7’s purchased through the Kickstarter will have a discounted price, compared to the full retail price they will have afterwards.

I have to admit that this is unusual for an established company to expand by using Kickstarter, but…doing it this way allows them to get a better feel for evaluating the demand, before they make a long-term commitment to alloting factory space and resources to this new model.

Since the smallest pack is still more than large enough to supply the 1,000W that Stealth is rating this geared hubmotor at (52V x 20A = 1000W), they are using a cell that is maximized for range instead of high current output, in order to keep the packs as small and as light as possible.

In pedelec mode (where you have to pedal for the controller to apply power to the motor), Stealth rates their two battery packs at a range of 62-miles, and 93-miles respectively (100 km or 150 km). Many Euro-spec ebikes do not have the option of using a hand-throttle, but the P-7 has both. My personal preference is to start out from a stop using the hand-throttle (when riding on streets around traffic), and then convert to Pedal-Assist (PAS) after I get running. But…whichever your preference, the P-7 has both. 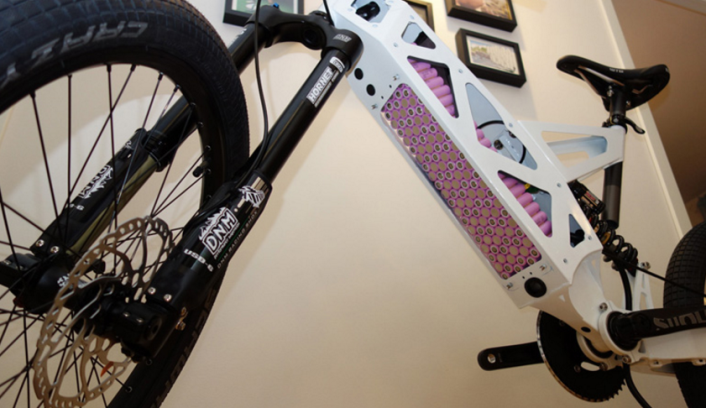 Whenever your factory battery pack wears out someday, you might be wondering if the slim P-7 frame will limit your maximum battery size for future upgrades. In the pic above, our friend (Allex in Sweden) is dry-fitting as many cells as he can squeeze into his FUTR Beta (which uses the same frame as the P-7), to decide what size pack he can get away with. There was more room left, but…he decided to go with 132 cells. That number of cells can be configured in several ways, and Allex chose 22S / 6P…(22 cells in Series, and 6 cells in each Parallel  group).

The cell he chose is my current favorite, a Lithium-NCA chemistry from Samsung, the 30Q (rated for 15A per cell). 3000-mAh per cell X six cells in each Paralleled-group = 18-Ah of range 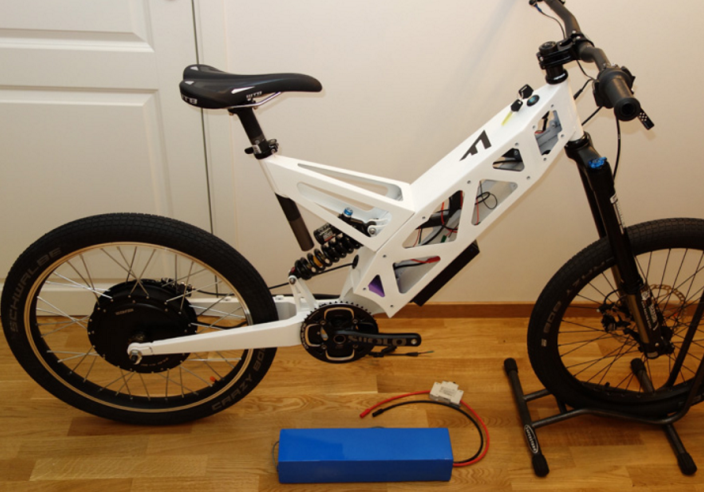 The 132-cell pack shown (in blue) is 100mm wide, 115mm tall, and 350mm long, and it easily fit. This is the FUTR Beta frame-kit, where you must purchase your own motor, controller, battery, and forks, etc…

Soon I’ll add a comparison paragraph here, but…I can tell you already that no factory ebike of this type has a battery pack option as big as this.