I own a Thudbuster, and I paid full retail price for it…long before I began writing about E-bikes. If you ride a hardtail bike (whether electric or “pedal-only”), I think a serious suspension seat-post is the best single purchase you can make to improve the bicycling experience (I also now own a Suntour NCX).

At that time, there were really no other options. I had ridden a bike with a fairly common and cheap “tube within a tube” style that is frequently found on the less-expensive bikes sold at big box stores. This style definitely helped, but it’s feel was very disappointing for me, and I actually added a large cruiser seat that had two large springs built into it to help the seatposts’ performance. 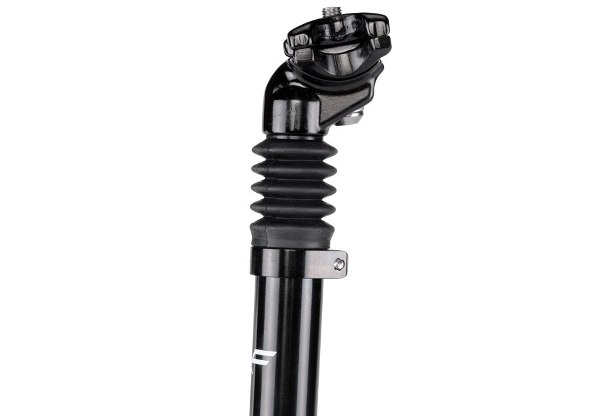 There is nothing wrong with this common and cheap style, but if you buy one, don’t say I didn’t warn you.

Fast forward to now, and I have seen several new models with a variety of clever suspension designs that expand on the concept, providing more options. [2016 edit: if you still want this type of suspension seat-post, the best quality units in this style are from “Satori“]

First up is a seatpost that is sadly not in production any more. It had FOUR INCHES of travel! and riders who liked it said it not only had the longest travel ever put on a seatpost, its compression was very progressive (softer at the top of the stroke, firmer near the bottom). Because of the shape and orientation of the parallel links, the seat travel direction swings down and to the rear.

I occasionally see one sold as a used unit, but don’t hold your breath…they are rare. 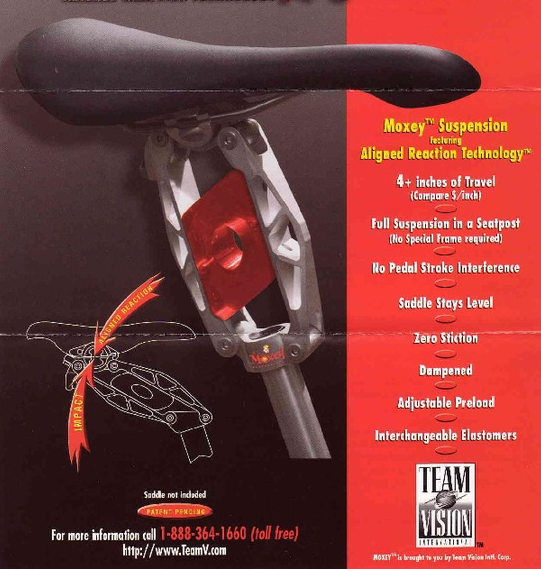 The Moxey is no longer in production.

The Tamer Pivot-Plus XC is available for purchase for about $120 retail (a price that’s similar to the Thudbuster), and in this picture you can see it also has a parallel-linkage to swing the seat movement down and to the rear. One of the links has a connecting rod, which transfers the downward-curving seat mount movement onto a coil-spring that is vertically positioned inside the seat-post.

I like the looks of this product, but I have not had a chance to try one of these. The pre-load can be adjusted and a different spring can be swapped-in to change the tension and rate, depending on the weight of the rider and the feel you desire. 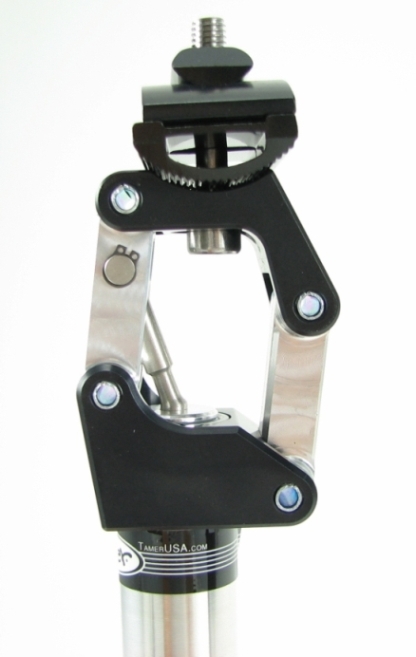 The Tamer Pivot Plus XC 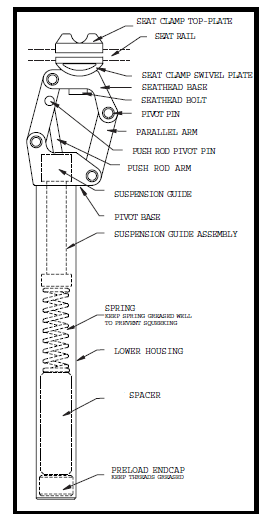 The insides of the Pivot Plus XC

This suspension seatpost functions in a very similar fashion to the Pivot-Plus above. But, instead of a connecting rod, the forward link has a roller that presses against the top of the piston which asts as a spring-cap and a bushing. This piston covers the top of the coil spring, which is vertically mounted inside the seat-post. The trailing link has a rubber bumper to dampen the return to its top position.

The stroke is 2-inches / 50mm. They seem to be readily available at dealers in Europe right now, but I have found them in North America on Ebay for roughly $120. [I purchased one of these in 2016 to try it out, and I am very happy with it] 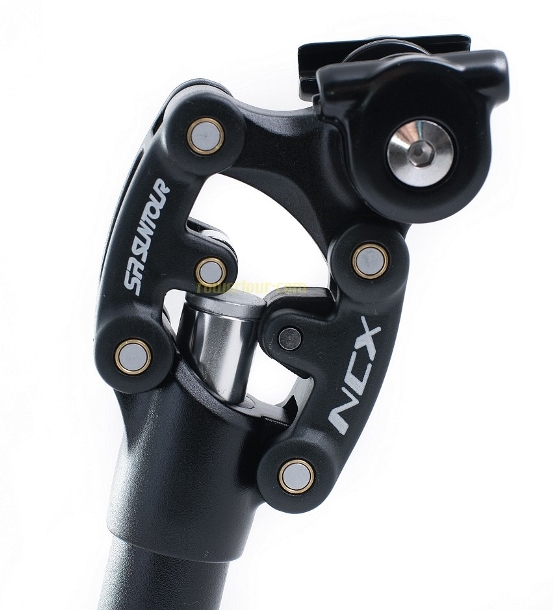 This is the most recent product in this category to become available. It was launched with a kickstarter campaign last year by Cirrus Cycles in Washington, and they are now available for approximately $349. It only has 1.5 inches of travel (38mm), but one of the issues it addresses is that long-stroke seatposts like the Thudbuster-LT sometimes position the seat too high for some riders to be able to set their feet on the ground at a stop.

It also uses two parallel linkages, but it uses two exposed coil-springs that are roughly horizontal. It’s very pricey, and we have not met anyone who has used one of these to get a feel for whether or not it is worth the premium. 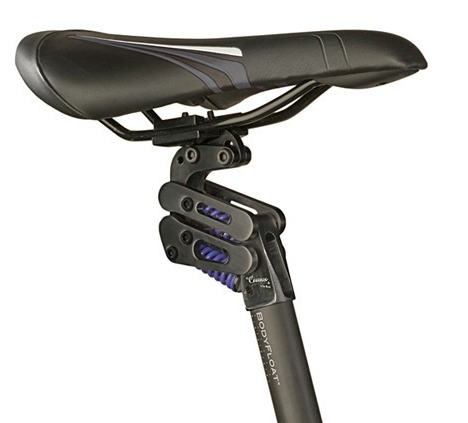 Finally, we arrive at the well-known Thudbuster. They can be purchased in a Long Travel (LT, 3-inches/76mm of travel) and Short Travel versions (ST, 1.3-inches/33mm). The retail price is $159, but they can be often be found on Ebay for approximately $130.

I have several bikes, and this was purchased for a hardtail that I own after friends recommended it to me. If I ever sold the bike, I would keep the Thudbuster. If I had the opportunity to try out some of these other new options, I might change my mind, but…until then this remains the single most important purchase I have added to this bike (other than helmet, gloves, and sport-glasses). If you have back problems, you might consider a full-suspension frame, or even a recumbent. But, even young adults with healthy spines should seriously consider how an unexpected hit on a large pothole would affect their lives.

The LT uses two rubber plugs, called “elastomers”. These elastomers can be swapped out for different ones that are firmer or softer. The ST version has an X-shaped elastomer, and during the seats downward stroke, it stretches in one direction, while it compresses in the other. 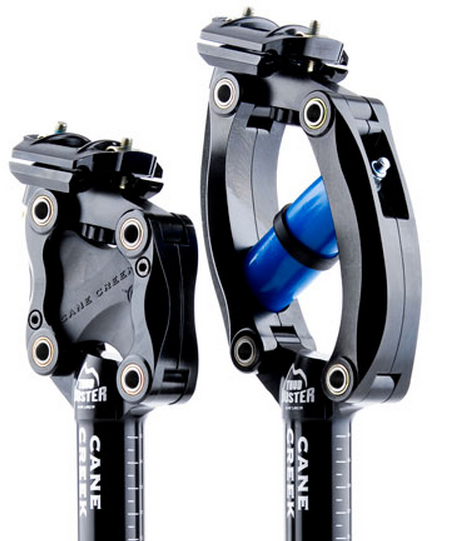 The Cane Creek Thudbuster. The Short Travel (ST) is on the left, and the Long Travel (LT) is on the right.

As of the Spring of 2017…Ladies and gentlemen..I present to you…The $50 Rinsten Spring. Here is a very rare Evinrude bicycle from many decades ago. Evinrude became famous as a manufacturer of outboard motors for lake-fishing boats. The seat-post slides up and down inside the seat-tube. Pic is courtesy of “Lipstick and Wrenches“, a classic bicycle facebook group. 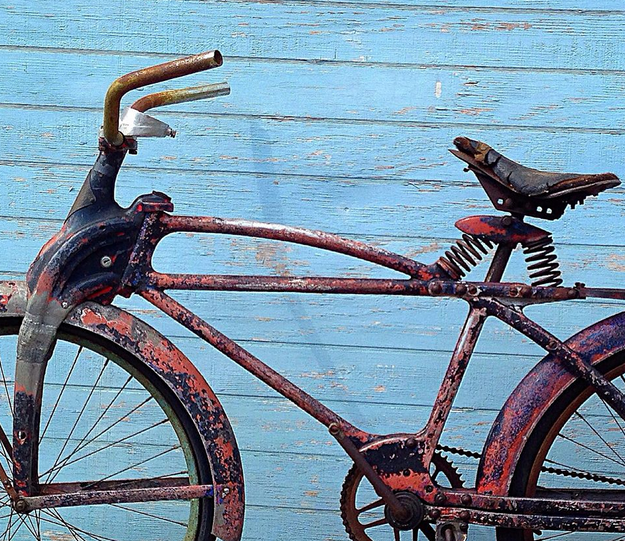 A very rare Evinrude bicycle from the pre-WWII era. 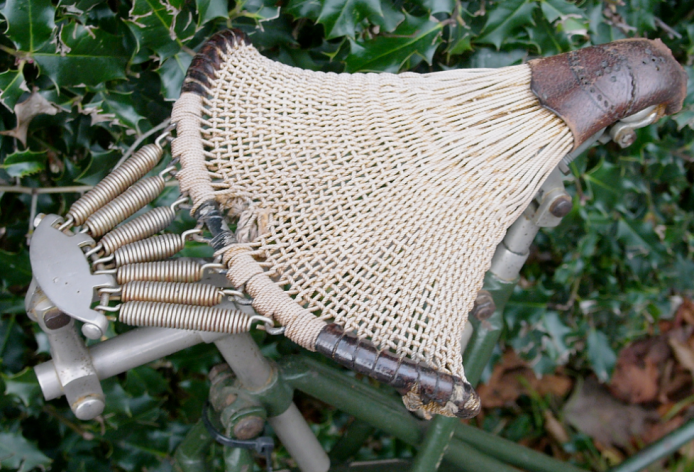 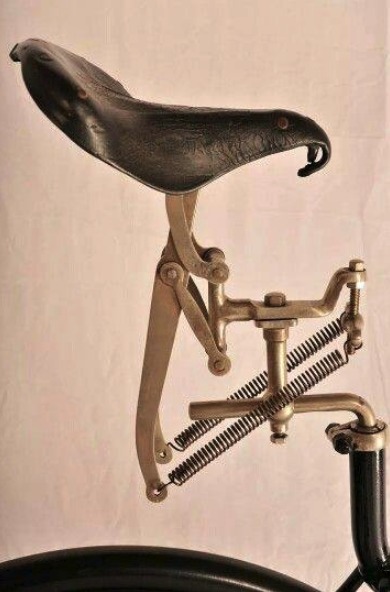 This is listed as a “1884 Selle Regina Molleggiata”, which is Italian for Queen Saddle, Sprung 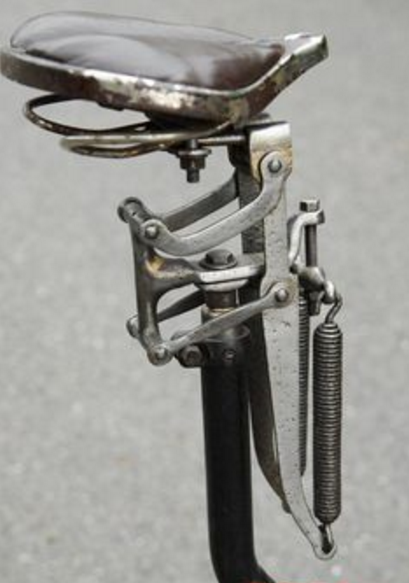 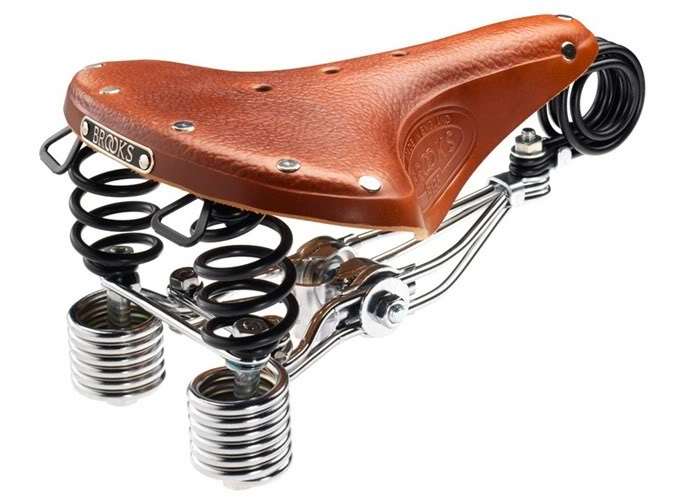 Reproductions of vintage saddles just like this can still be purchased, just search “saddle bicycle hairpin” (the coiled lever-spring on the front is the “hairpin” part)