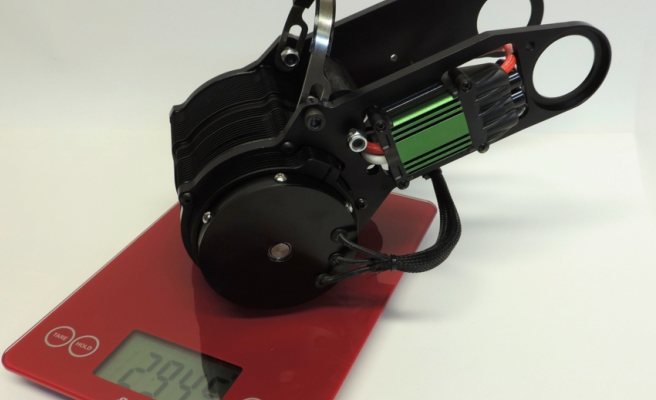 The Tangent Ascent mid drive kit is made by a clever guy named Dave, who lives in Seattle, Washington. It uses the well-known Astroflight motor, but…the really interesting part is the unusually compact cycloidal reduction, and this is the first time I’ve seen a working cycloidal on an electric bike.

We’ve written about mid drives before, and also about ebikes that used the tiny Astroflight motor. In order to get a high power level from a very small and light motor, you have to spin it at unusually high RPMs. This is where any “would be” Astro-based drive designers have had difficulties. The Astro has been reliably run at up to 12,000-RPMs, but a 26-inch diameter tire traveling 26-MPH is spinning a little over only 330-RPMs. Reducing 12,000-RPMs to 330 requires a roughly 36:1 reduction.

Also, if you look closely, the green rectangle on the left side of the drive is the Castle Creations HV80 Electronic Speed Controller (ESC). A few years ago, there were many custom builds trying to get these small and light systems to work on an electric bike.

They were originally designed to be used on very light RC model aircraft, which can accelerate very quickly. Ebikes with a lot of power can also accelerate pretty fast, but…nowhere as quick as a model aircraft that weighs only a few pounds, which means an ebike using RC components will experience peak amps for longer periods than they these ESCs are used to.

Plus, as the RC aircraft propellor spins through the air, the amount of “slip” the propellor experiences acts as a safety that avoids bogging down the motor if the power is suddenly raised, which would cause excessive voltage ripple and voltage spikes that could damage the ESC (ebike controllers are different, and can survive more abuse). Ebikes that attempt to use an RC ESC to drive an RC motor must keep the RPMs up high, so…they absolutely need a lot of reduction. 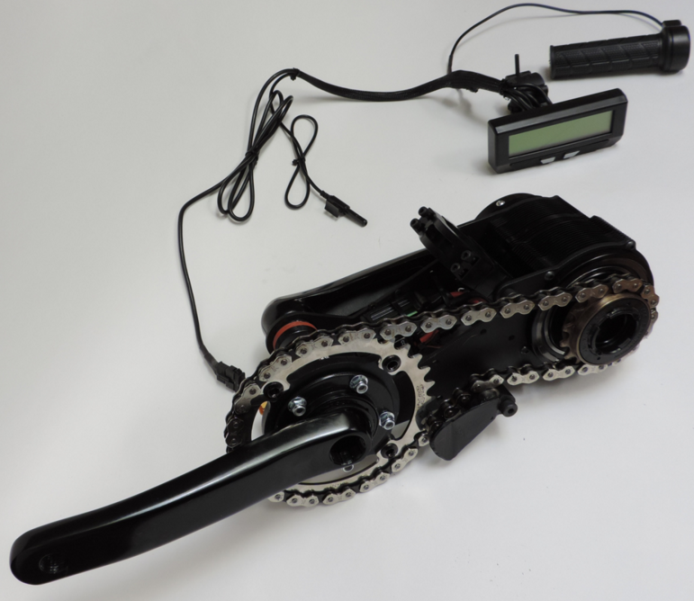 However, once you factor-in adding a physically large reduction, the small size and weight of a light motor becomes less beneficial. Endless-sphere member “tangentdave” had read about cycloidal reductions, which are unusually compact for a very high amount of reduction (he currently makes a 40:1 reduction, and a 20:1). He had the skills, tools, and desire to develop a cycloidal reduction that was perfectly mated to the Astroflight motor series. At these high power levels, this is as small and as light as it can get.

As many of the recently developed mid drives have done, this design mounts to the sides of the bottom bracket cartridge, and also uses the now-common freewheeling dual chainring. On that style, the motor drives one chainring, and the second chainring drives the rear wheels’ gears.

The next two pictures show how incredibly thin and small a cycloidal can be (52mm wide shown here). Dave developed quite a few prototypes, so…the more mature versions were specifically designed to be easy to disassemble for servicing the bearings, using only basic tools.

In the pic below, the outer ring-gear is stationary, and the inner gear “wobbles” around the ring gear. The output is taken off of the holes in the sides of the inner gears. This style of reduction is not only physically tiny, it is incredibly robust, and can survive sudden and high torque-peaks. 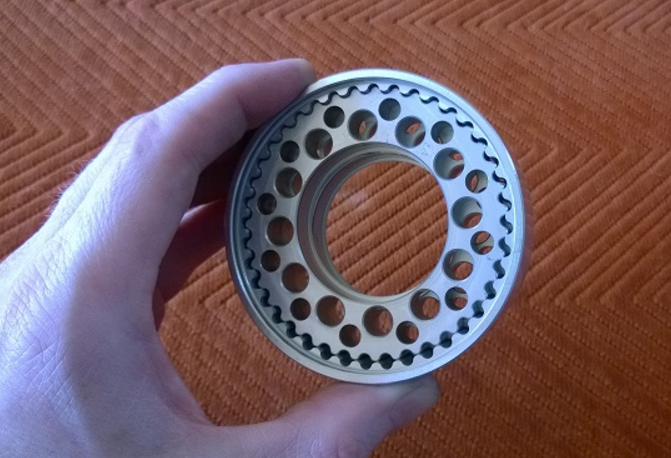 There are already several builds using this drive on endless-sphere, so anyone who is interested can be assured that they it a real product. Here is a technical paper on cycloidals, and also here is a short youtube animation that should explain how it provides such a huge RPM reduction. 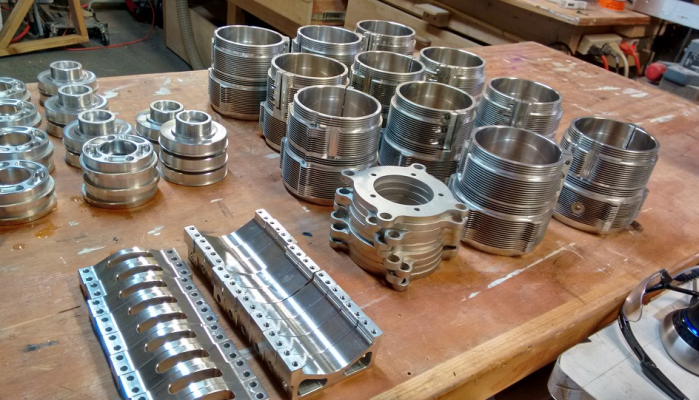 First up is a mid drive with the Tangent Ascent in the common location, just in front of the BB. The bike is a light aluminum off-roader, and this is an appropriate mate. The aluminum ribbed housing that holds the motor and reduction together also acts as a heat sink to absorb and shed any heat that is generated by the motor. 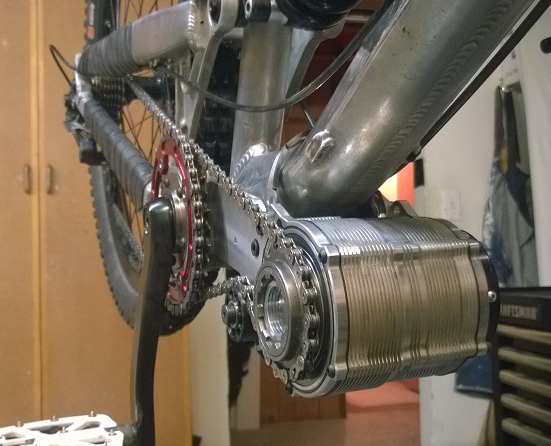 A closeup of the drive-unit freewheel and mount, plus the dual-chainring BB

On the Santa Cruz frame below, you might notice that the chain-stay on the far side is “asymmetric”. The left side (in the foreground) is triangulated as much as possible for strength, and the right side has a “slightly elevated” Chain-stay, so that the chain does not pass around the chain-stay. I’ve always liked the elevated stay design, but that’s probably because I’ve had to do so much work with chains in the past. An elevated stay on the chain side means I can pop chains on and off the bike without having to break any links, or use a master-link (which sometimes fail). 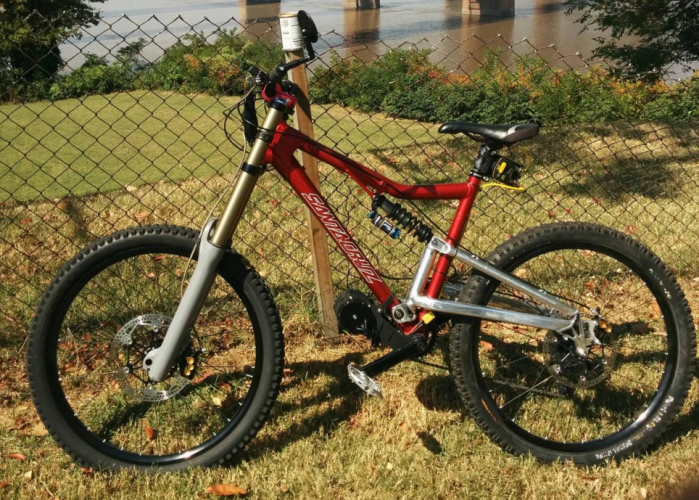 Next up in the pic below, the Tangent drive is rotated up so that the motor and reduction are mounted inside the triangle. Small chainrings can provide a high ground clearance to allow for the ebike to crawl over fairly substantial obstacles. The small Tangent drive in the forward location is pretty tucked-up and fairly safe from strikes, but…mounting it here provides the ultimate protection for your expensive investment. 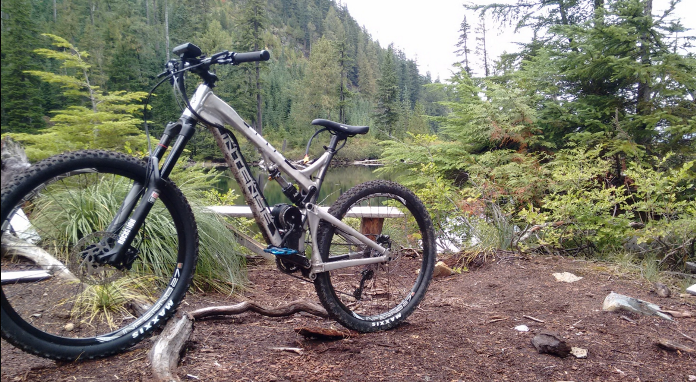 A Tangent Ascent drive in its natural habitat

Last up is a development prototype from Dave himself. By having a single chain-run riding on the BB chainring, the forces on the single freewheeling chainring (using an ACS Crossfire flanged freewheel) should be dramatically lessened so the freewheeling BB should last much longer when using high power levels (compared to the common dual-chainring set-up, which normally experiences torsional loads)

Power can be varied by choosing a system with a different voltage, and also by adjusting the max amps that the controller allows to be used (the base model uses 44V X 80A = 3520W). This frame is from a small New Zealand outfit called Zerode, and the G2 Downhill model is shown below. It places a Shimano Alfine 8-speed IGH near the high pivot, at the point where both of the chains shown here overlap.

By moving the 8-speed IGH out of the wheel and onto the frame, the “unsprung weight” is about as low as it can possibly be (minus going to titanium and carbon-fiber), which leads to the suspension on the rear being as light nimble and responsive as is physically possible. 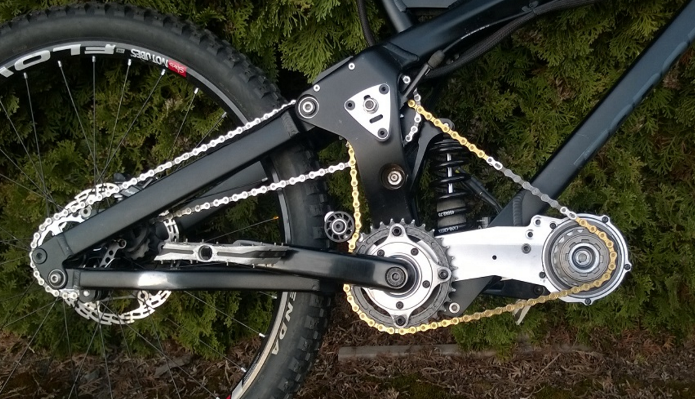 An interesting prototype being developed by Dave

If you are a member of endless-sphere, you can contact Dave here. He can also be contacted at his website, found here. 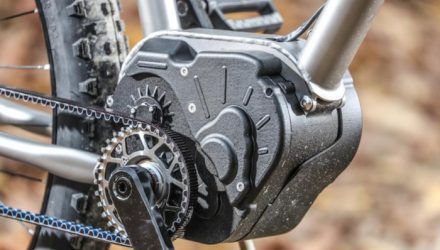