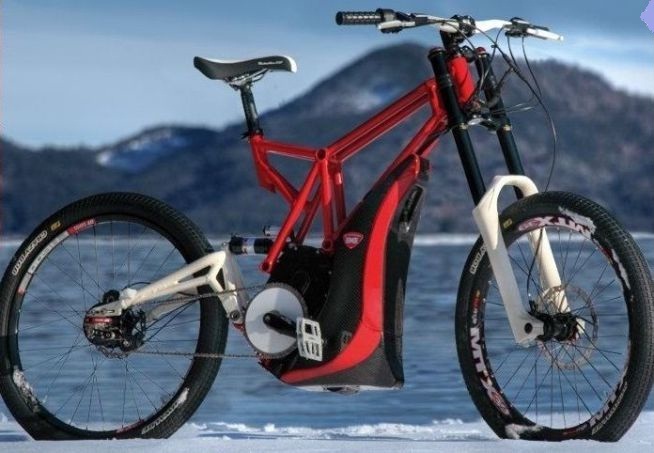 This is a very expensive German full-suspension E-Bike that is only available in Europe at this time. The drive system is almost identical to the drive on the KTM Egnition, since both use the ‘Clean Mobile” BB-drive system.

The two frames between the Egnition and the eSpire are similar, and I like how they mounted the battery low and between the down-tube and the front wheel. That space is rarely used on E-bikes and I have felt for quite some time that it is the best location for a battery. It’s a place that is normally ignored, making for a wasted opportunity.

I’ve also had a fondness for rear suspension arms like this, often found on mountain bikes. It allows the chain to be removed and installed without a chain-breaker, or a master link. Although chains are not removed and installed often, it’s a nice feature if you work on your own bikes, rather than always having a shop repair them after a hard weekend on the down-hill runs.

We will add more info on this interesting bike as it becomes available.

The retail website for Third-Element can be found here.

Here’s a video of the eSpire being ridden through a city.

And here’s a video of Anthony West riding one on a dirt track.

Here’s a picture a friend sent me.