While looking at pictures from the recent Eurobike 2013 convention in Germany, I finally saw a pic which reassured me that some of my personal preferences were not crazy. There was a pic of a hardtail E-bike with a hardcase that was shaped to perfectly fit the frame triangle, and I had been hoping for quite some time that someone would start making these. Customer response may nudge other retailers to start carrying a similar product.

Since the battery might not necessarily be shaped exactly like a triangle, that also means that there is some unused space inside this case that might be used for a pair of gloves and safety glasses. Even if this model of case doesn’t allow that, perhaps someone down the line might do that, so we have our fingers crossed.

This particular case is on a Conway EMR 627, and I hope it is a hint of more things to come. I can’t help but to wonder if it might be possible to purchase just the case alone as a repair part (since I believe it can be adapted to other frames). Although…even if that’s possible, it might only be available if ordered by a retail outlet that is a registered dealer for Conway Bikes in Europe (rather than an international direct web-store purchase). 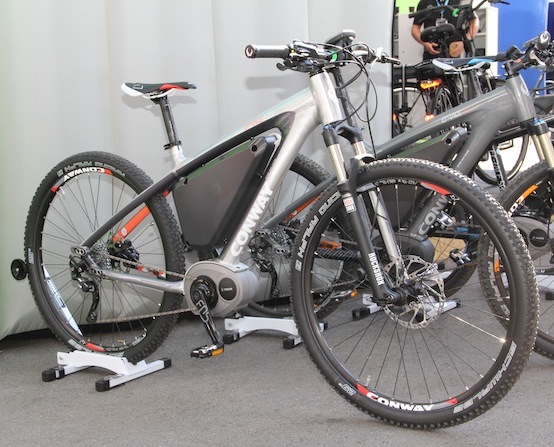 Here’s the Conway triangle hardcase that I really like.

The next one that I just stumbled across is from the Riese & Muller company, and it is an accessory for their cruiser models in their blueLABEL line. It looks like leather, but it is a synthetic material that is waterproof. I first saw it here on their Facebook page 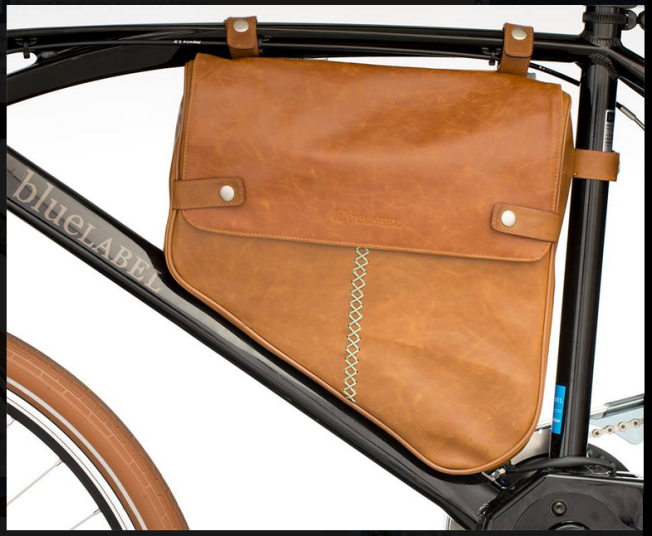 Here is a DIY triangle case from ES member Nicobie, and here’s the build-thread that shows how he built it. Cruiser frames like this Electra Townie, the Trek Pure, and the Giant Suede have lots of room in the frame triangle for a large battery. A bigger than average battery pack may be needed if you want high volts or extra-long range. Here’s an article on this awesome E-bike. 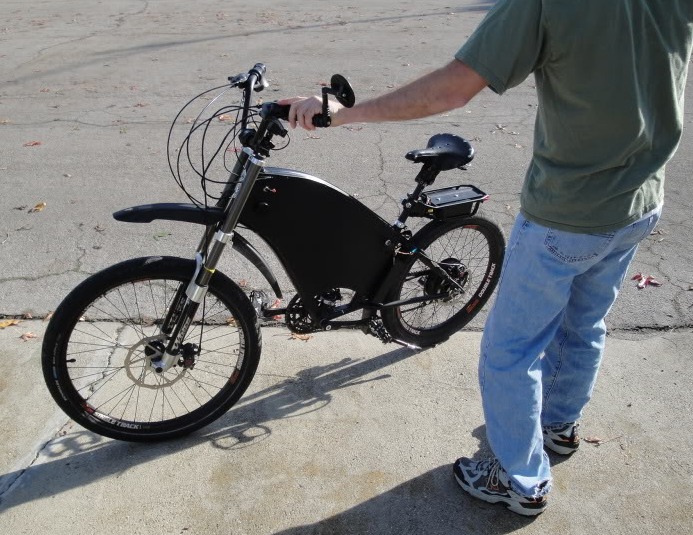 Nicobie’s Electra E-Townie. The side-plates are aluminum sheetmetal, but he covered them with some peel-and-stick that looks like carbon-fiber.

Here’s the biggest reason for a triangle case on an E-bike. Nick was able to fill this roomy case with a large 24S pack of LiPo (24 cells in Series, times 4.1V when full = 98V!). If you hung this large pack on the back of a bike on a cargo rack, it would have a very negative effect on the bikes handling, especially if your bike already had a heavy hub-motor on the rear wheel. 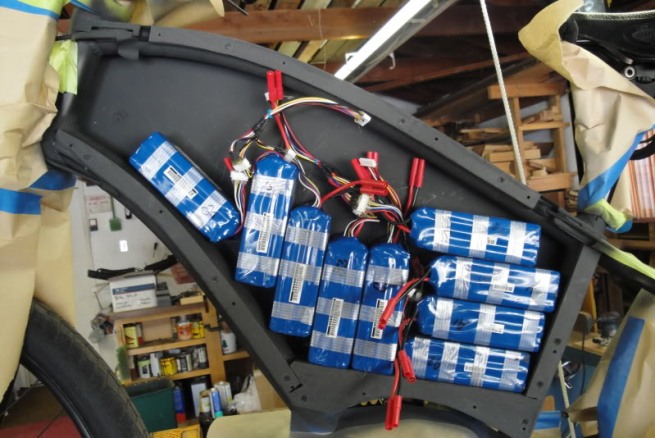 Here is a thread from Endless-Sphere where builders post their home-made battery cases, and a quick scan for triangle cases did not disappoint me. The first example is from ES member e-cannon, and its really hard to believe that this is home-made, but…he documents the entire process to prove it truly was made on the kitchen table of his home with his own hands. First he shaped a solid foam core, and then overlaid it with some fiberglass from a boat-hull repair kit: 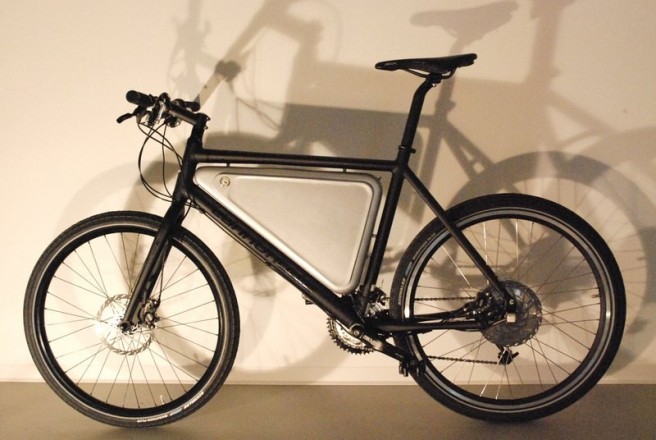 This Cannondale road-bike was electrified by ES member e-cannon.

Here’s one more DIY from ES builder dannyboyohyeah. I don’t have enough room in this article to show all of the great triangle cases, but I especially wanted to include this one because he shows how he used common tools and easy-to-source materials to get an incredibly professional result. 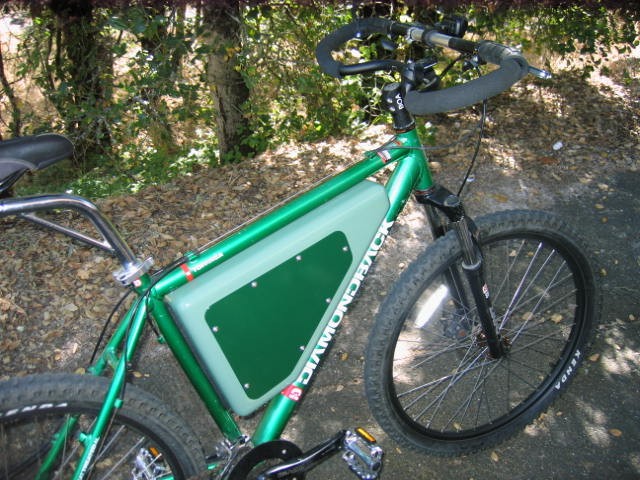 I’m glad Danny took this pic before it was painted, because it clearly shows how he simply used thin plywood, PVC pipe, and some glue to make the body. It just doesn’t get any easier than this. 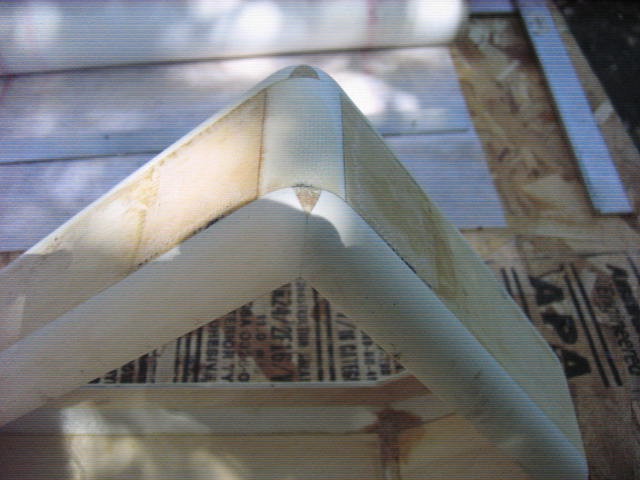 After the parts are all assembled and glued, you add a little Bondo plastic filler to the joints, sand it smooth, and primer it in prep for a paint job. One option is to use automobile “touch up” paint, which can provide some awesome results.

I really think that this is one area where factory E-bike manufacturers are really dropping the ball. Injection-molded plastic cases (like those small suitcases that store cordless tools) are very inexpensive to make, and one of the most profitable sectors of any consumer industry is upselling accessories once the customer has selected their main purchase. 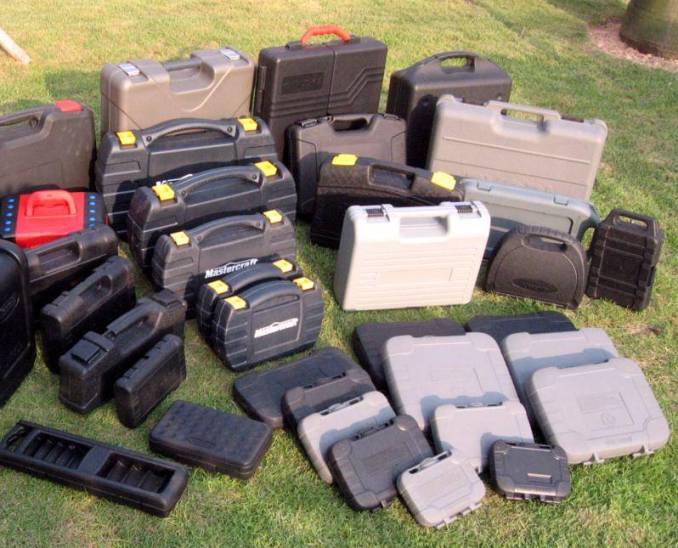 Mass-produced injection-molded plastic hard-cases are very cheap to make, and can be made any color or shape. Whats the hold-up from E-bike manufacturers?

One of the biggest sellers of E-bikes in the USA is Pedego. Their most popular sellers are mid-range cruisers with a rear hub and the battery pack in the rear cargo rack. This is the one complaint I have about Pedego’s current product line.

With their large sales volume, they could easily specify a triangle battery pack in a hard-case that is form-fitted to a common cruiser frame triangle. If they did this, I think they would be shocked at how many they sold to riders who don’t even own a Pedego. No large retailer is doing this in North America, and they could be the first to take the lions share of that market.

There is a trusted vendor at Endless-Sphere called cell_man (Paul), and his website is em3ev.com. He is the only retailer I know of right now that stocks triangle battery packs. Unfortunately, he does not sell hard cases for them, but he does carry an affordable soft-sided triangle bag that uses Velcro wrap-around straps  to hold the bag onto the frame.

He has two triangle-pack models, and they are both configured to provide 50V (prices include a BMS and a charger, but do not include shipping). One choice is an 18-Ah model for $725, and for smaller triangles (or someone who only needs a shorter range) they have a 12-Ah model for $510 (dimensions of the 12-Ah shown in the pic below). 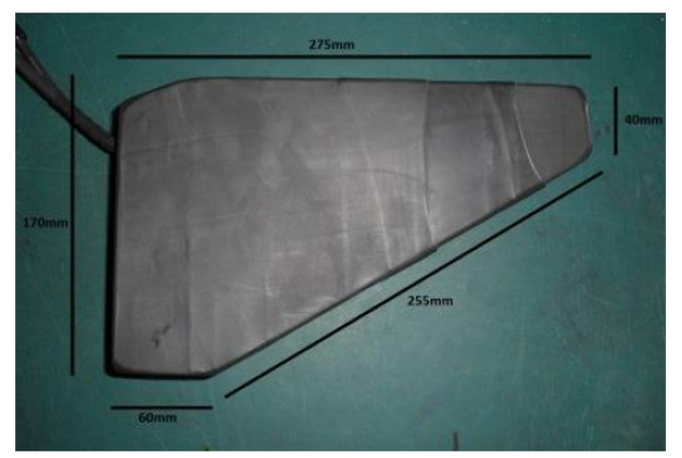 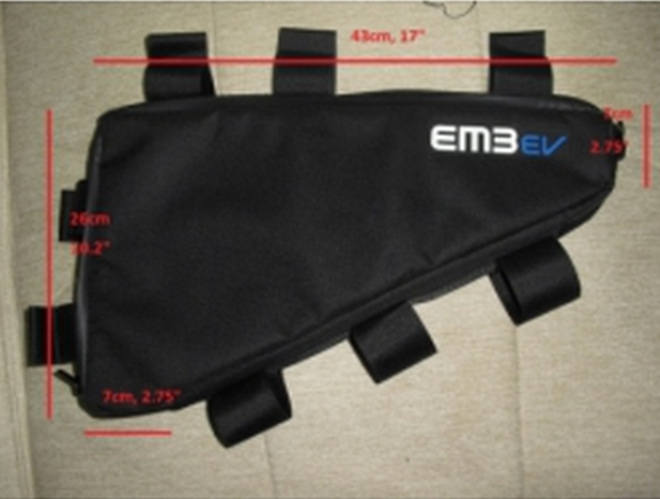 Another triangle battery holder that I have seen frequently is the $47 soft-sided triangle bag from Falcon-EV. If you are curious about this bag (whether for batteries or cargo), here is a discussion about them from owners. Here is the purchase link. The link is the battery selection page, and you must scroll down to near the bottom to find the battery bag. 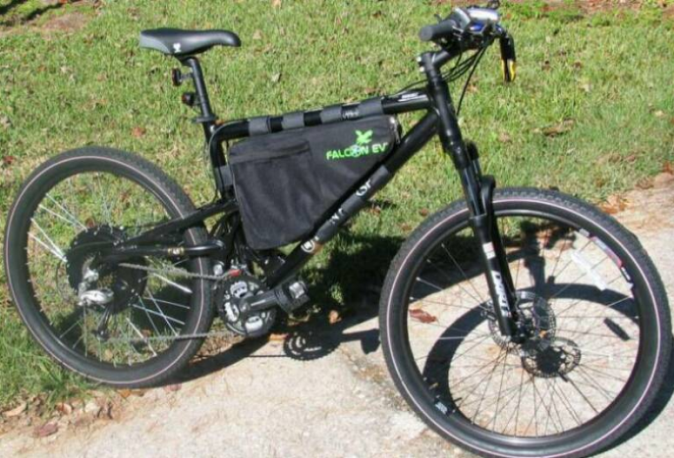 Frame triangle bag from Falcon-EV. It is made from a tough woven synthetic fabric and is well-regarded in the E-bike community.

Here’s a late addition to this article. Once published, a friend sent me a link to the $20 Ibera triangle soft-side triangle bag, which is available for purchase on Amazon. It is listed as 16-inches long X 11-inches tall (406mm X 280mm). 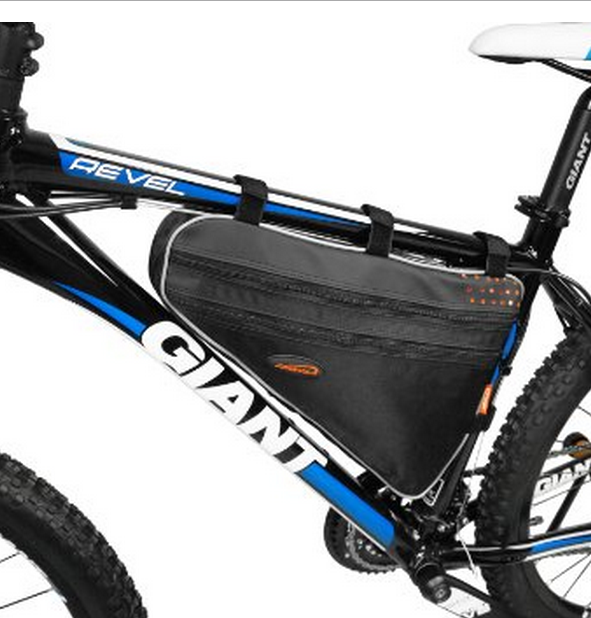 The Ibera triangle bag. This is a smaller bag, and and may be useful for downhill (DH) frames.  (notice the low top-bar)

In conclusion, I think triangle cases/bags are great. Even if you don’t have an electric bike, they can hold your bicycle helmet along with your sport-glasses and gloves (I have lots of scars due to my care-free attitude, but when it comes to my brain, eyes, and hands…I’m very cautious). There’s even room for a small tool-kit, a spare tube, and an air-pump.

Of course, the best use of any kind of frame-triangle storage is the heavy battery pack. Then, any other light-weight accessories you carry can be stored on the rear cargo rack, where they wouldn’t hurt the weight balance of the E-bike. I am hopeful that someone will wise up and start producing these. You’d only need three or four sizes of triangle case to start, and I think the E-bike community will immediately respond in a very decisive manner.

Here’s a late edit: This triangle battery case in the pic below has been for sale with the Izip Express E-bike, but not available alone without the bike. 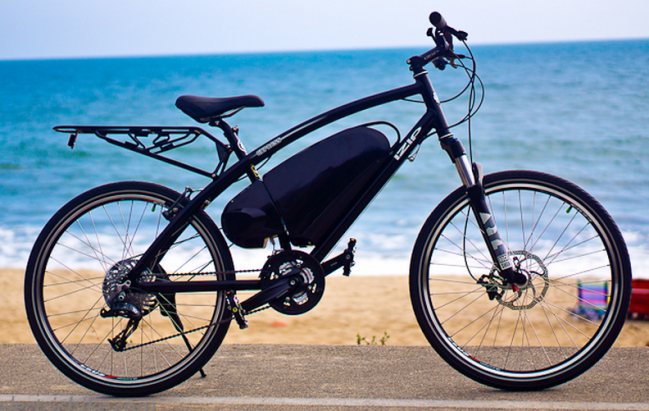 Another addition, here is an E-bike that’s made in India under the “Hercules”  nameplate. 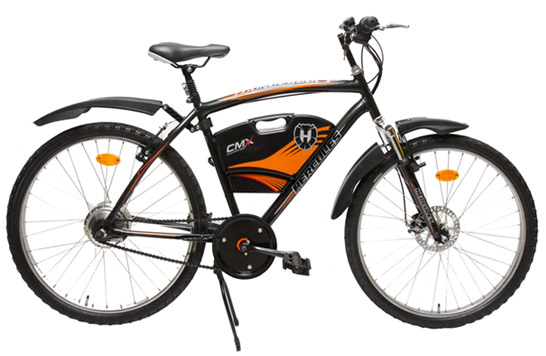 This may just be a mild-assist single-speed E-bike, but this central battery case is the type of thing I’m talking about.

EMPowered Cycles is now offering a triangle hardcase made from a tough ABS plastic that is (of course) non-conducting, non-rusting, and very water-resistant. 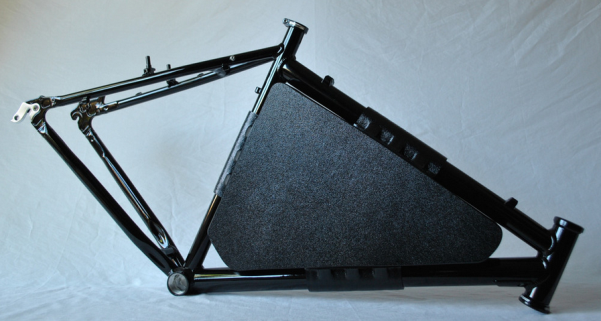 Here are two bicycle riders from the USA, who had recently graduated from Washington University. They rode across Europe, and then continued all the way to Peking, China between 1890 to 1892. William Sachtleben and Thomas Allen rode Singer Safety’s in England, and once they decided to extend their trip as far as they could ride, they changed to the Humber bicycle. 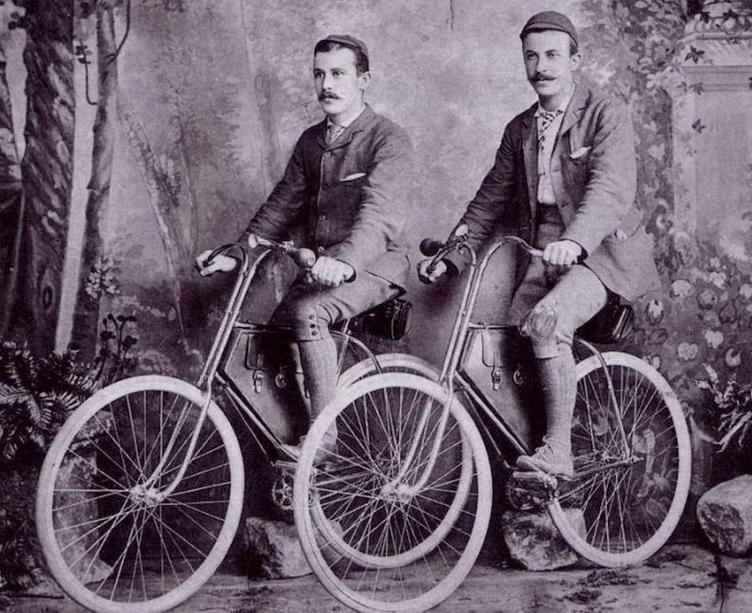 As of the Summer of 2015, Luna Cycles is now selling an awesome triangle bag for a very affordable price. 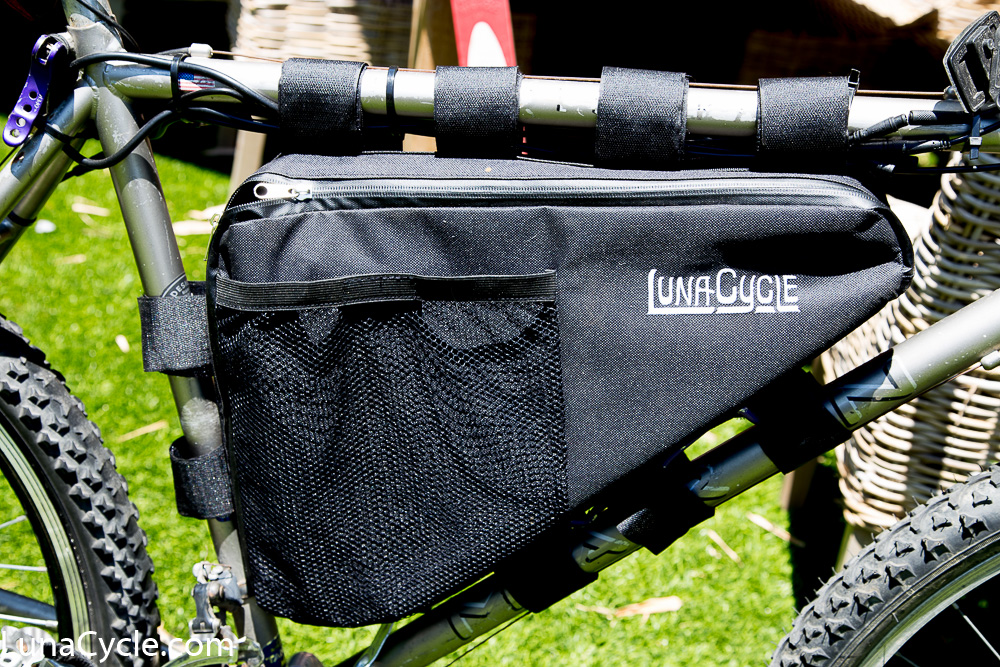 A very affordable and strong triangle bag from Luna Cycles.

12 Accessories For Your Ebike

December is here, and many people are looking to find gift ideas for the ebiker in their life, or…maybe you are thinking about treating yourself to something

Battle of the Bafang BBSHD ...

Editor note: Here is a nice little review one