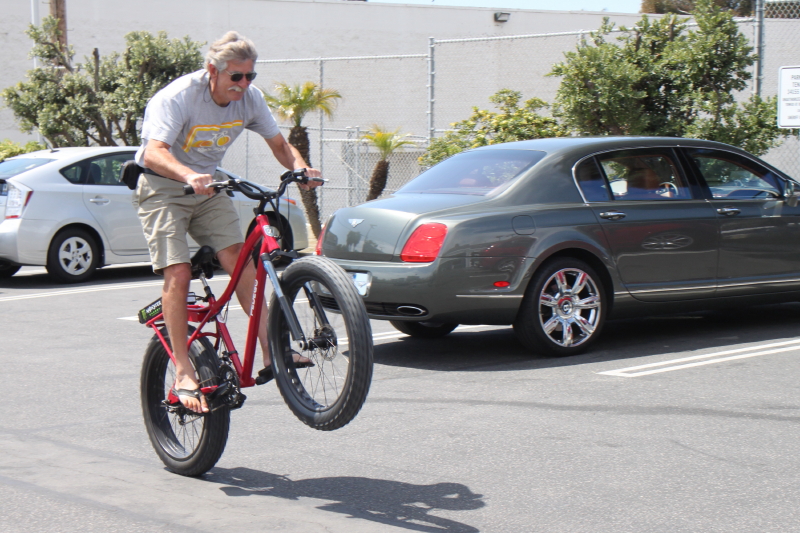 Editor note: We are proud to have Turbo Bob join our team. We welcome him and respect his work, even though he has a different take on ebikes than we usually do.  I have spent some time with him and think he is a true believer in ebikes and has no commercial interests or loyalties. He is a good guy on top of it all. 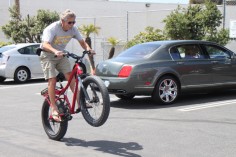 I do a bunch of fat-tire electric bike stuff, yet they aren’t my favorite type of E-bike.

Yes, I’m a product of the 60’s, dreaming of Hemi Chargers and tire-smoking motorcycles. As a kid, bicycles were as much a passion and transportation freedom, as they were a stepping stone to the gas-burning madness. I fulfilled my needs with all that stinky ICE stuff, some with flat four air-cooled turbo Bugs that easily took on the muscle cars that roamed the local streets. Enter the 90’s and bikes took center stage in my life again. My first E-bike ride took place in that decade, and the last decade has been an E-bike super cruise that doesn’t seem to end.

Many of you know me from my bike blog and videos, using a play on my teenage nickname, Turbo Bob’s Bicycle Blog. For 5 years I have been shooting off my internet mouth on the fun of bicycles, to the tune of E-bikes, folding bikes and vintage bikes. It plays to my personal experiences more than the technical side of all that is two-wheeled. With other sites and even the printed media in my resume, I have added to my reporting footprint in many ways. My 3 sites (that includes Facebook) will continue on as normal, but here I will dive even deeper into the E-bike world.

I posed this shot for an interview with a women on bikes site.

When first approached by Eric & Ron, I figured my easy riding E-bike ways wouldn’t fit here on the ElectricBike.com pages, yet some serious arm-twisting convinced me that a little mellow would balance with their wattage and speed hungry followers. Even though I love a quick blast on some over-powered chain snappers, my everyday rides average maybe about 16 mph. So, I will feed to the smooth crowds, and the fast crowds will feed back to me.

As much as I love reporting on electric-assist bicycles (what they could and should easily be called), much of my interest is in giving feedback to the makers of ready-to-ride machines (to bring about better E-bikes), and educating the world at large what a great transportation alternative E-bikes are (as so many are still uninformed). (Don’t forget the fun, green, and health parts). That is what has fueled my twice-a-year seminar called “Introduction to Electric Bicycles”. With no equal I can find, part of what makes it work is the no sales, no pressure vibe at the event, rules I initiated from the very beginning. All 30 vendors work together to ‘sell’ a ‘lifestyle’ to the 170 or so who come for the knowledge and bike testing 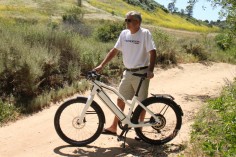 ST2? I was at the dealer training meetings and had first shot at one.

I’ve dabbled enough with conversions and modifications, still, it is the ready-to-ride E-bikes that fill most of my E-bike pages. I will cover those bikes here, but I will push to expand my own personal power levels, covering more of the stuff you readers like and desire. From what I’ve seen of the articles here, the build-it-yourself peeps rule and dominate most posts, but I have to think that the cruisers like me want a voice too.

The first question many might entertain while reading my stuff about E-bikes could be, “Why should I believe this doofus?” That name could ring true, yet I am really a gearhead from day one. At a very young age I was using the tools my dad had to fix the appliances, repair the TV, and generally learn about every electro-mechanical device that fueled a household back then. He handed down his kit-built HiFis to me when the newest ones cleared his work bench, so that too became a talent that I learned. My bikes came and went, as I bought them second-hand, got them riding nice, and moved onto the next one with each profitable sale. 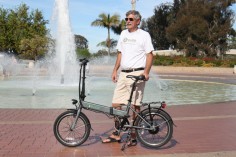 My wife and I do tons of group rides. That allows me more time on the bikes and to let others give them a try.

Times were different back then, so I was able to earn my own pocket change by selling personalized greeting cards door-to-door, mowing lawns and playing paperboy for many years. With a slew of tools on hand, I perfected my soldering skills, learned circuits and even built my own VOM. By 13 I was our family mechanic for everything from the cars to the water heater. The day I turned 16 I had my own sports car (that I rebuilt from a $75 non-running find), license and insurance, all paid for with funds I earned myself.

Although I didn’t realize what a bad deal it was at the time, that was also the day I put aside my bikes in search of my passion for speed and petrol. It took about 20 years of professional and amateur car and motorcycle racing, modifying and repairs to re-find my love for bicycles (what a wonderful day that was). Those years as a auto mechanic found me also as an avionic aircraft mechanic in the 82nd Airborne, and time spent as a bench electronic technician. The last 20 years of my professional career was spent plying my trade as a sewing machine tech, a skill I also learned when I was a youngster.

Now, bikes are mixed in with my lifelong hobbies of model aircraft building and flying, model railroading and a new found ability as an artist. Exciting too is my wife of 10 years refound love of bicycles. She has been following her goal of protecting the environment long before I met her, and getting her first bike since her childhood during our early months invigorated her in great ways. She is in her 8th year of daily bike commuting on her E-bike (and many of the ones that come and go for test reviews). I can never get her to put paper to pen about her experiences, but get valuable info everyday from her. 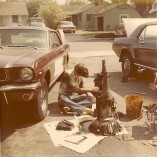 This is as much auto as you will see in my posts (thought you’d get a kick out of this old Polaroid). Me during the high school years. My front yard was the local race shop.

My point is, my the years behind me center perfectly with the E-bike world and everything that surrounds it. I have hovered close to being a perfectionist and social outcast because of my driving need of understanding electrical devices—mechanical devices—and electro-mechanical devices (the exact definition of an electric-assist bicycle). Plus my ability to expertly handle 2 and 4 wheel speed machines (bragging?) allows me an even better prospective of what makes a good E-bike. Add to that my fine touch with hand tools and most any kind of controllable device, give me just enough credibility to spout my wisdom. Other Turbo Bob trivia, I am not too computer savvy, I don’t do cell phones, and my Thule T2 bike rack is probably worth more than my 80’s Toyota station wagon (runs great though).

I could go and on about what a great wrench and rider I am, but my last point goes more to the credibility of my reviews and opinions. I have made a point of accepting no cash from the reviews on my sites or with those annoying ads. You will see me wearing some free t-shirts and chowing an occasional free meal, even accepting bike parts and accessories left over after I review them. I was a little concerned that ElectricBike.com supports a store, with unique deals on certain E-bike supplies, yet you can be assured that I am not associated with that aspect, and won’t profit from it either.

So, if you will, join me in welcoming me aboard to ElectricBike.com. Turbo Bob.

You can find my various sites here: