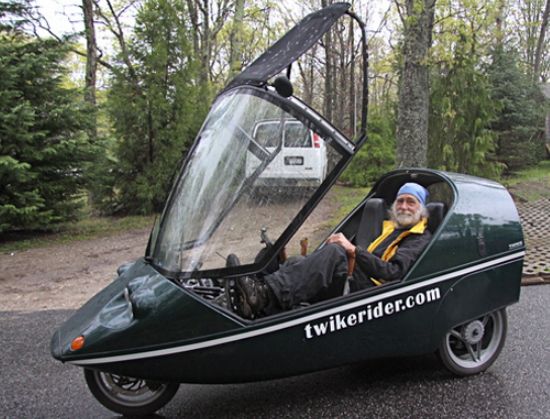 Q: What kind of car goes 45 miles on an electric charge and a bowl of cereal?

A: Walter Breitinger’s electric-and human-powered TWIKE. The Valparaiso commodities broker uses his to commute back and forth to his Merrillville office every day. Don’t expect to go down to the local showroom and pick one up just yet, though. The closest dealership is in Seattle.

In fact, there are only four of the Swiss-made vehicles in the United States and only about 320 in the world. However, electric vehicles are gaining popularity and may offer a glimpse into the future of transportation.

Riding down the street in the strange white, three-wheeled capsule, he seems a bit like a visitor from another planet. Pedestrians stop and point. Cars and trucks honk their horn.

“I get it all the time,” Breitinger said. “Usually, it’s thumbs up.”

The police often stop him because the vehicle, which he prefers to call a “Verde”, is not licensed as a car. Breitinger carries a copy of an Indiana law with him, which defines a “motorized bicycle” as a “two- or three-wheeled vehicle that is propelled by a battery powered motor.”

It sometimes doesn’t help, though. He recalled that one time a Valparaiso police officer pulled him over and told him he wasn’t going fast enough.

No serious challenges have been made yet to his right to drive on roads.

“I try not to ever impede traffic,” Breitinger said. He pulls over to the shoulder if cars are stuck behind him on busy roads. He makes the 15 mile commute to his A.G. Edwards & Sons office very day in about 35 minutes. Sometimes, he brings a change of clothing in case he sweats too much.

The TWIKE has pedals and an electric engine that’s smaller than a washing machine motor.

The motor or the pedals or both can be used to power the vehicle. It’s steered with a joystick in the right hand. It also has a computer that would be the envy of any techie.

It even says “bye bye” when you shut the machine off. One unique feature of the TWIKE is its brakes. There are four different braking systems. A regenerative braking system actually puts energy back into the battery while the vehicle slows down. It also has hydraulic disk and drum brakes and a parking brake.

Finally, it has good old-fashioned coaster brakes that kick in when you pedal backwards – just like the ones on your bike when you were a kid. The manufacturer said that it can go over 50 mph on a flat surface. Breitinger likes to keep his at 25 mph or less to improve the range. The TWIKE also has the standard car accessories such as windshield wipers, window defogger, a horn, turn signals, lights, and even cruise control.

In a recent TWIKE demonstration in Europe, a group of riders started out from Switzerland and traveled to Europe’s northernmost point in Norway and returned. Breitinger isn’t sure how the TWIKE will perform in the winter, however. He’s worried about traction and cold batteries and said that he may have to resort to other means of getting to work.

Breitinger has been interested in conservation for the last 30 years. His garage is littered with human-powered gadgets. He has pushed grass cutters, arm and leg-powered recumbent bicycles, a recumbent tricycle and numerous regular bicycles. He rode a recumbent bicycle with a shell to work for five years before he bought the TWIKE.

“I want to encourage people to look at alternatives to fossil (fuel) cars,” he said.

He believes that automobiles have harmed people’s health by allowing them to be more sedentary and have harmed the environment with pollutants.

“A lot of aspects of our life have been damaged as a result of the automobile,” he said. “It’s gone way too far.”

He first saw the TWIKE while attending a conference on solar power in Germany. He learned the name of a man in California who bought a TWIKE and went to see him. He was shocked at the $18,000 cost.

All three of the big U.S. automakers have introduced production model electric vehicles (Evs). Ford has an EV Ranger truck, Chrysler ahs an EV minivan. Some automakers, such as Toyota, are working on hybrid vehicles that use both electricity and gasoline to cut emissions.

Even former Chrysler Chairman Lee Iococca is getting into the act. He started a company called EV Global Motors, which is developing Evs. Breitinger believes that has them all beat.

“Their efficiency is nowhere near mine,” he said.

At about 500 pounds, the TWIKE is much lighter than most production vehicles. It also has pedals and an extreme aerodynamic shape.

“My goal is to be without any automobile,” Breitinger said.

“The purpose of this is to demonstrate that these things can be done.”