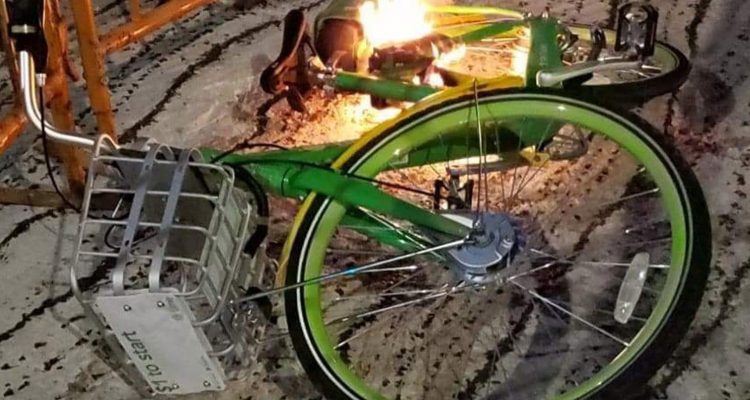 Why Lime Bikes are anything but green

Bright green Lime bikes, ebikes and scooters can be found all over many cities in the US. At first I relished the idea of a bicycle, ebike and scooter company that people could easily rent by the hour, but as I got to learn more about the company and it’s practices that infatuation quickly ended. While a bicycle, ebike and scooter sharing company could be incredibly carbon positive, there are many things that Lime does that are not even remotely ‘green’. This article is about changes that Lime needs to do to start being as green as the color of their bikes.

My first experience with bike sharing was about many years ago at Burning Man with the Yellow Bikesharing program. Basically there are a bunch of new cruiser bikes that are painted green that say ‘Yellow Bike’ on them that are community bikes that anyone can grab and go anywhere with. You’re not supposed to decorate them or lock them up (although poser burners often do). I found the program pretty awesome, except you would often take the bike out to the deep playa only to have someone grab it as soon as you walked away from it forcing you to have a long walk home. Great program, but I have to advise that you wear pants whenever you ride them because, well, you never know who’s junk has been rubbing on that seat and STD’s are a thing, you know?

Is anyone even making money on bikesharing?

At this point the only company making any money off ebike and scooter sharing programs is the manufacturers of the products in China (for Lime that is mostly Segway-Ninebot). While investors dump billions into Lime and Bird both companies continue to burn through capitol at an alarming rate. It seems unlikely that these companies will be profitable in the foreseeable future unless gas gets as expensive as it probably should be (~$12.64 a gallon like it is in Zimbabwe).

What E-bike and E-scooter sharing companies are good at

One of the things that Lime is really good at is getting people who would otherwise never get on an ebike or a scooter to try one out (the first ride hit is free). Since the rental prices are so reasonable and people do not have to ‘return’ the bikes to a particular place it makes sense for a lot of people who are walking from place to place to see a bike and then decided to ‘impulse rent’ it to get to where they are going. From that standpoint they are not saving that much carbon, in fact they are generating carbon because someone has to drive out and collect the battery and then take it home to charge that ebike or escooter on a very frequent basis. Most of these people are driving around in pretty big trucks so they can also collect and move ebikes if they get too far out of town or end up in places that Lime doesn’t want them to be.

My anonymous source inside Lime confirms that he was paid by Lime to destroy dozens of perfectly good escooters and bikes. Instead of trying to sell them on the secondary market or deal with fixing them they just destroyed them all and took pictures of the destroyed stuff with serial #’s to send back to headquarters. I don’t know how or why anyone would do stuff like this, but my guess was that there was some issue with the batteries that they didn’t want to deal with. In my hometown of Ithaca 4 Lime ebikes were found burned up 2 weeks ago, but it’s not clear if it was vandalism or a spontaneous combusting battery issue. Keep in mind Ithaca is a tiny city of 30,000 people and issues like this are still a real thing.

Their stuff is way to easy to steal

When Lime bikes first appeared in cities the large ‘GPS Tracked’ sticker and the voice that would talk when you tried to move the bike was enough to deter most bike theives. After a while it seems like people realized that Lime doesn’t seem to care much what happens to their bikes and scooters. Personally I would never leave my $1000 scooter or ebike on someone else’s property for extended periods of time, yet that is exactly what Lime is doing. It won’t take long for people to realize that it’s relatively cheap and easy to swap out the controller on the Lime ebikes and scooters and remove the GPS. Once someone starts doing this in an organized manner and reselling the bikes and scooters, I don’t see any way that Lime can survive.

Vandalism is out of control

It seems like a new past time for hooligan loving teens is to throw these bikes and scooters off bridges and into lakes and rivers. I’m not talking about a few bike and scooters either, I’m talking about hundreds and possibly thousands of them. There are serious environmental consequences from throwing a lithium battery into a body of water, and to anyone out there doing this I have to tell you, there are a lot better ways to ‘stick it to the man’ than to grab a scooter and throw it off a bridge. I encourage you to get a little more creative with your hooliganism.

I don’t believe in property ownership, but the very foundation of American law is one of property ownership. If I take my personal property (an ebike) and abandon it on your sideway (its a right of way, but still your property) then the laws suddenly get very fuzzy. There is services that you can call that will come and remove the offending property and force the Lime to pay money to get their property back. Again the laws around this are fuzzy, but if third party companies can go around and snatch up all these scooters and ebikes and hold them hostage then I don’t see any way that it can really work in the long term.

The ebikes break due to a bad kickstand design

My source at Lime also mentioned that he spent an whole lot of time repairing broken crank arms and brake levers on Lime ebikes that had fallen over due to their top heavy weight and crappy kickstand. If the ebikes and a large center kickstand with a flat bottom it would be much more stable, even when parked on grass and they would not fall over and break all the time.

What Lime should do to be more ‘green’

I think that bicycle sharing programs are a great idea and that part of Lime I find incredibly sublime. With a little bit of effort, it’s possible that the ebike and escooter part of their sharing program could also be sustainable or even carbon positive, but as it stands right now I would say that Lime is anything but green. If you want to be truly sustainable, then just buy an ebike or scooter and use it and charge it yourself and see the joys of living a car-free life.