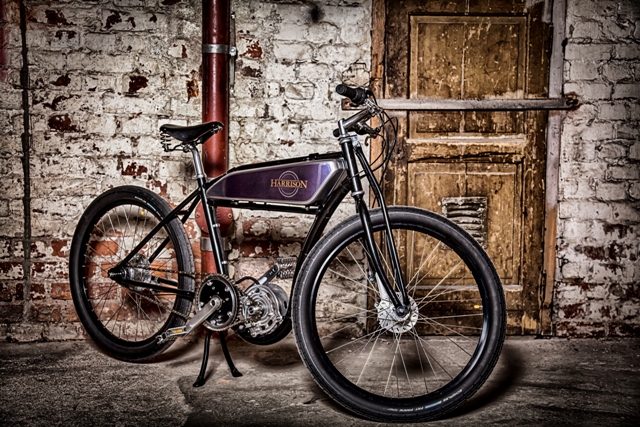 In the 1910’s to 1920’s, there was a popular style of motorcycle racing on oval tracks with steeply curved banks which allowed high speeds to be maintained in the turns. It was called boardtrack racing, due to the surface being made from wooden slats. 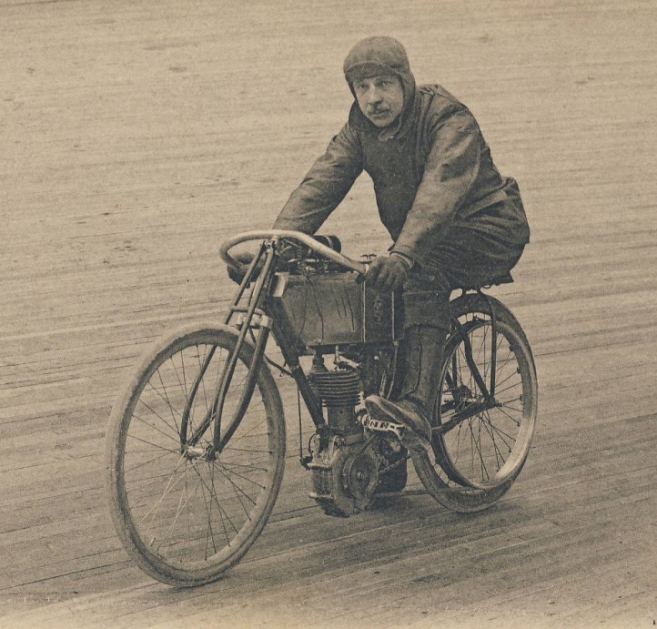 A boardtrack motorcycle racer from France in 1917. 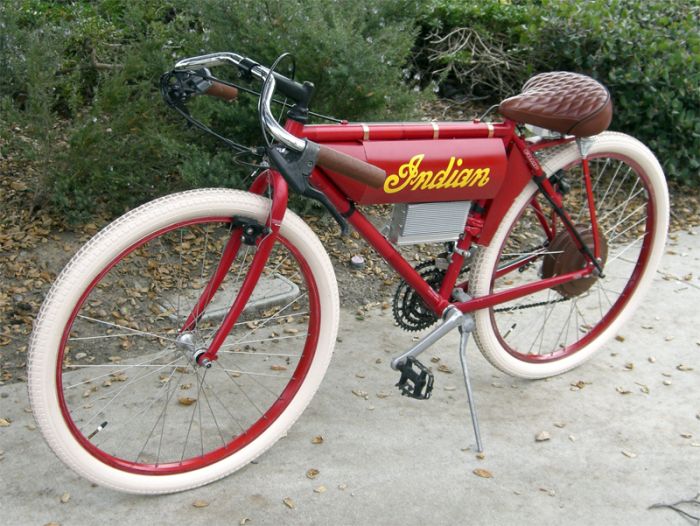 If these bikes really grab your attention, it is their retro style that makes them interesting….and they draw a lot of attention anywhere they go. 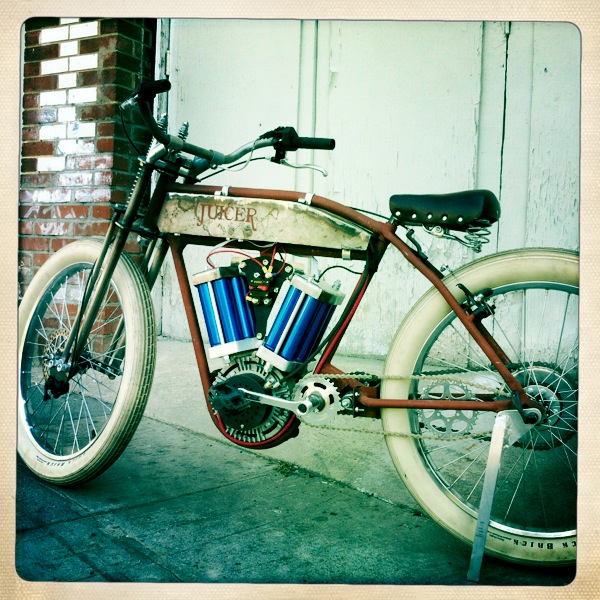 I have seen several custom E-bikes made to replicate the boardtrack racer style, and now a small company in Finland is making very stylish examples for sale.

The electrical system on the Harrison E-bikes is a mid-drive that allows the motor to use the bikes gears, so that aids the efficiency of the system, in order to get a wider range of performance from a somewhat average motor and voltage.

It appears that this system is an off-the-shelf design that has gained some notoriety from a Taiwan company called Cyclone. The motor and planetary reduction gear are well sorted out and they are sourced from a company called Headline. The steel gears in the planetary reduction are known to be durable, but have proven to be somewhat noisy, with the sound often being described as similar to a cordless drill. 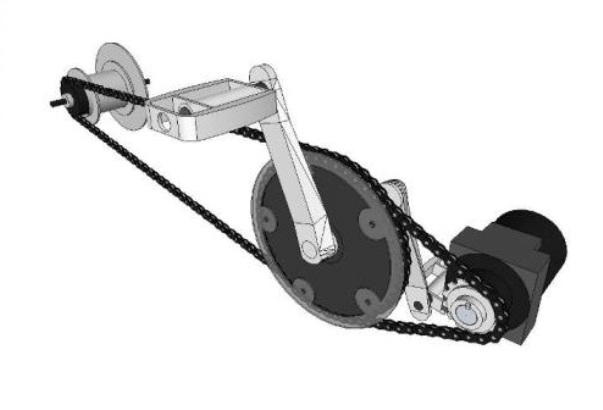 Two chainrings on a freewheeling Bottom-Bracket crankset, with a second freewheel on the output shaft of the planetary reduction output.

This shop is small and makes the bikes to order. They try to have at least one model handy to show customers, but they are often sold as fast as they are made. The price is somewhat steep, with prices ranging from 3250-Euros up to 5,000 Euros depending on which options are chosen (in July 2013, the current exchange rate equals $4,190 to $6,450. The price includes any custom paint scheme the customer desires.

The system voltages range from an uninspiring 24V up to an adequate 36V system. The site lists the battery chemistry as the proven LiFePO4, and the listed pack sizes range from a very good 15-Ah up to an unusually large 25-Ah.

Everything about the style of these bikes is smooth and uncluttered, and that includes the only listed gear choices, both of which are Internally-Geared-Hubs (IGH’s). The base model is a well-known Shimano Nexus 8-speed, and the expensive high-quality upgrade is the German Rohloff 14-speed.

For brakes, the base model uses effective and common V-brakes, and the upgrade is the almost hidden roller-brake. Shimano roller-brakes are not well known these days, but they are very effective, and are built into the wheel hubs. They are a proven option on heavy duty pedicabs, and their internal construction is similar to a cars drum brake. Roller-brakes are very heat resistant under heavy use, and should handle anything this bike can throw at them. 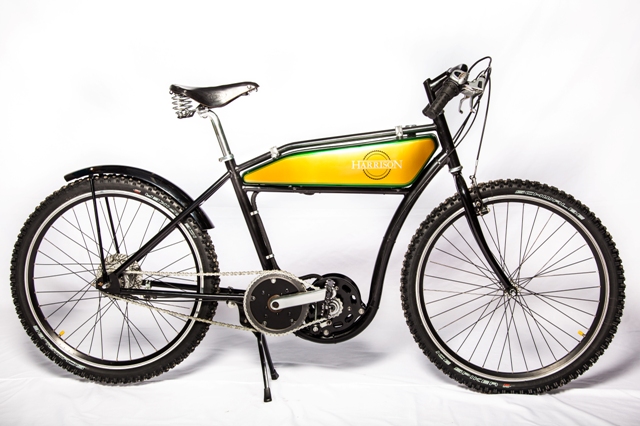 The gold and black version is as classy as the purple and black flagship color scheme.

At first I thought the motor had a larger diameter than it actually does, but what I was seeing was only the round aluminum mounting plates, which I suspect also function as a heat-sink. Headline motors have been found to survive heavy use better with some type of added heat-shedding aids. 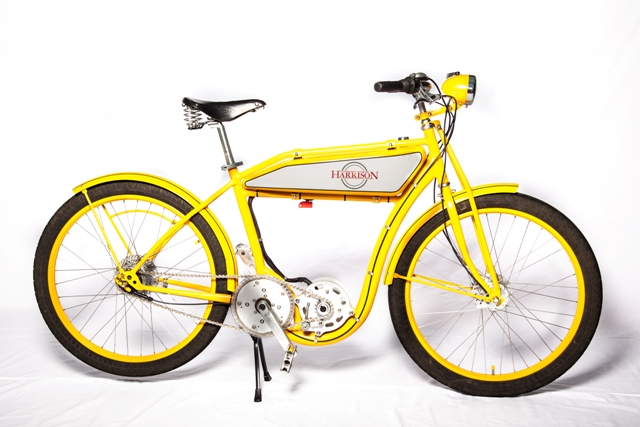 This customer chose a bold yellow color-scheme, along with fenders and a classic headlight.

Even though the Harrison E-bikes are clearly street bikes, I like how the frame passes under the motor and chainrings, which protects them if you jump a curb, and it would also provide a similar protection on an off-road frame.

The designer wise chose a sturdy two-legged stand, and this style of kick-stand has been found to work well with bicycles as heavy as most E-bikes are. 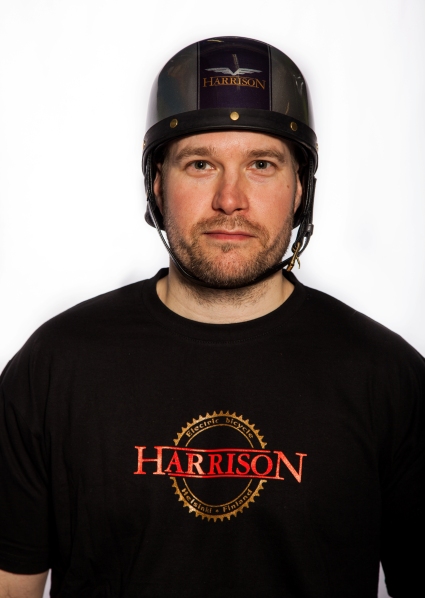 The accessory helmets can be painted the same color as the bike you order.

There’s not much information available about this company. If you check out their website, I found it useful to use Google as the browser so it was easy to click on “translate”, for any interested parties that don’t read Finnish.